Promenades in Paris - Part I 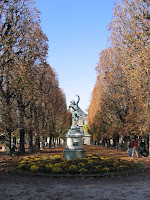 Move over "Autumn in New York" - these past two weeks in Paris have given the old adage some competition! Despite, by all accounts, a dreadful September, the month of October has been absolutely perfect - crisp, cool days, falling chestnut leaves, the arrival of oyster season and a stronger dollar!

The art scene has been pretty amazing too with a plethora of outstanding museum exhibitions and some fun art fairs too. From The Renaissance to Futurism there is something for everyone! Here is a capsule review of some favorites, in close to chronological order:

The Louvre presents "Mantegna", a "poetic itinerary" of an artist who began his career in the feverish creative atmosphere of Padua, Italy, in the 1440's and went on to fame and fortune in his native land. Andrea Mantegna (1431-1506) started painting as a very young man and achieved success quickly with his work on the Ovetari Chapel in 1453. His marriage to the sister of Giovanni Bellini earned him entry into the most important painting workshop of the time and the resulting collaborations influenced the destiny of painting in Northern Italy. He became the official painter of the Marquis Ludovico and under this patronage created some of his greatest works which in turn led to a commission to decorate the chapel of Pope Innocent VIII in the Belvedere of the Vatican. Mantegna was very influenced by antiquity and his drawings, paintings and engravings, are distinguished by their attention to historical detail as well as their superb execution. This extensive exhibition offers an in depth look at Mantegna and his circle and their major influence on the Italian Renaissance.

Across the Seine at the Musée d'Orsay are three special exhibitions that museum goers will not want to miss. "Masques: De Carpeaux à Picasso" explores the history and importance of masks in art and culture. Since early times, masks have been objects of fascination representing metamorphosis, religion, ritual, drama and decoration. Hidden by a mask, the face is highlighted - the object establishes a barrier, creates a mystery and allows the wearer an unparalleled freedom. Created from wood, ceramic, wax, metal, papier maché and pate de verre (a method of casting glass using a mold and a glass paste) and spanning the ages from the Italian Commedia Dell'arte to Japanese Nô, from Symbolism's "Strange Beauty" to Surrealism's obsession with Africa, there are masks of every variety imaginable. 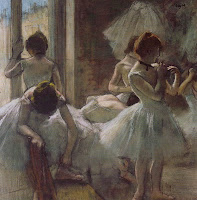 Located on the main floor is "Le Mystère et l'éclat (Mystery and Glitter)" a fabulous exhibition culled from the Musée d'Orsay's own collection of pastels. Pastels first appeared in the 15th Century in France and Italy and were used primarily to give extra color to portraits. By the 18th Century pastels were the preferred medium for portraiture until the French Revolution brought an end to the popularity of this art form. Fortunately the beginning of the 19th Century saw a renewed interest in the medium of pastel as artists re-discovered its unique properties and effects. Many artists created some of their best works using pastel with Manet's nudes, Degas' ballerinas (see right) and Redon's flowers being particularly beautiful examples. 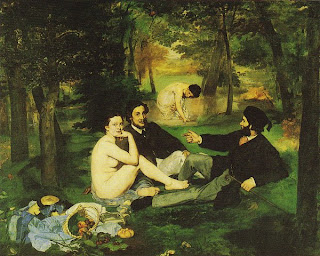 Also on the main floor is a small but quite interesting exhibition that explores two very different artists' interpretation of the same subject. "Picasso/Manet: Le Déjeuner sur l'herbe" looks at the ground-breaking 19th Century painting by Edouard Manet and the profound effect it had on the 20th Century genius, Pablo Picasso. In 1863, Manet presented his work "Le Déjeuner sur l'herbe" (see above) at the Salon des Refusés where it was virulently criticized for portraying a nude woman lunching in the open air with two fully clothed men. The fact that it had been influenced by the Italian masters Giorgione and Titian did nothing to quell the controversy and the painting caused Manet much hardship. Fast forward to 1932 when Picasso sees the painting at a Manet retrospective presented at the Musée de l'Orangerie and it strikes him like a thunderbolt. Picasso went on to work with this motif in many paintings, watercolors, drawings, prints and even in life-sized concrete outdoor statues. The success that eluded Manet at the time, was bestowed upon Picasso many times over as this brilliant theme was recreated at a more appropriate time. 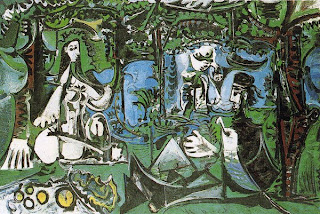 Next blog, we will head back over to the Right Bank and explore the 20th and 21st Centuries with Emil Nolde, Jackson Pollock, Lee Miller, the Futurists and FIAC!! See you there!
Posted by Georgina Kelman at 9:17 AM