"The Artist as Jeweler" at MAD

I'm afraid I've been remiss in posting blogs this month but I'm back in action with a full slate of new shows for the 2011 fall season! Let's start off with a visit to the Museum of Art and Design, or MAD as it is affectionately known, and their small but wonderful exhibition "Picasso to Koons: The Artist as Jeweler" that opened on September 20th and runs until early next year.

We are all familiar with traditional fine art forms, paintings, drawings, sculptures etc, articulating the sentiments of artists throughout the ages. This show explores a much more intimate means of expression - pieces of jewelry - often created as unique gifts for close friends or in very limited editions for a select few, and therefore not very well known to the museum going public. This presentation of 180 miniature artworks by some of the biggest names in Modern and Contemporary art reveals just how important to the artists' œuvre these very private treasures are.

What surprised me the most about this exhibition was the cross section of artists who used jewelry as an artistic medium. I was familiar with the wire jewelry of Alexander Calder (see my blog "Calder P.S." January 11, 2009), the iconic "Ruby Lips" brooch of Salvador Dali and the gold spiral "Pendentif Pendent" earrings of Many Ray, but I had no idea that artists as diverse as Damian Hirst, Louise Bourgeous and Arman had created Lilliputian versions of some of their best known works such as a silver "Pill Charm" bracelet, a gold spider brooch and a silver deconstructed violin belt, respectively. 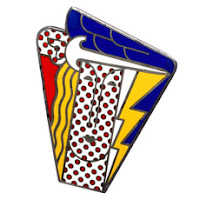 Grouped together in one vitrine were pins, bracelets and a watch by Pop Art icons Roy Lichtenstein, Robert Indiana, Victor Vasarely and Andy Warhol. A gold and blue enamel "Water Ring" by Anish Kapoor was as beautiful in a small format as his larger convex colored sculptures. Italian "Spacialist" artist Lucio Fontana's silver and lacquer "Elisse Concetto Spaziale" bracelet was as elegant in miniature as his slashed monochrome oil paintings. And my personal favorite was a pair of silver earrings on a stand by George Rickey that were as mesmerising a kinetic sculpture as anything he created for the great outdoors. 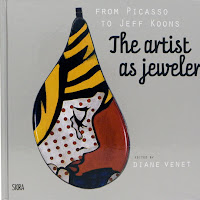 I was very much looking forward to seeing this exhibition and I was not disappointed. Guest curator Diane Venet presents a strong selection of works by an amazing roster of artists, each confirming the supposition that these special pieces, personal and generally non-commercial, were in fact every bit the objets d'art as the larger more famous creations we go to art museums to see.

P.S. Special thanks to my friend Dong Kingman Jr. for taking me to the show!
Posted by Georgina Kelman at 1:40 PM No comments: 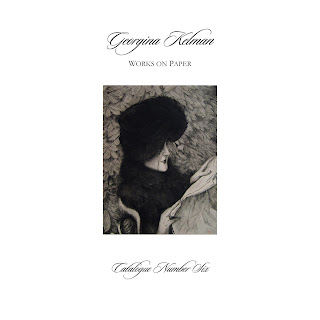 I am pleased to announce the publication of my sixth catalogue!

Georgina Kelman :: Works on Paper presents Catalogue Number Six, a cornucopia of fine prints, drawings and watercolors by European and American artists from the Victorian Era to the Jazz Age. In it you will find items ranging from a World War I poster drawn by a French schoolchild to Paul César Helleu's master print "La Duchesse de Marlborough", from an illustrated book by Art Nouveau genius Alphonse Mucha to an uncut set of 19th Century playing cards. There is something for everyone and every budget so please feel free to contact me for your copy.

Summer has once again flown by and we are winding up for the fall art season. It promises to be an exciting one and I hope you will join me for visits to museums and attractions here in New York and wherever I happen to land! Cheerio!
Posted by Georgina Kelman at 6:09 PM No comments:

As the tenth anniversary of the September 11 attacks approaches the memories of where we were and how we reacted as the catastrophe unfolded have resumed a prominent place in our daily psyche. Time may not exactly heal all wounds, but the pain became less acute as life returned to a facsimile of pre-9/11 normal. Now with the memorial looming, and New York City once again under a high terror alert, we are reminded of the overwhelming fear and sorrow that ruled our normal existence in the aftermath of that terrible day. But there were also some rays of sunshine in those dark hours. Tales of unbelievable bravery, kindness and generosity were reported as Americans and our allies around the world came together to recover and rebuild. 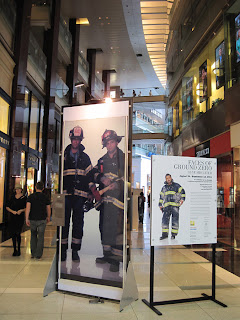 In a beautiful and moving tribute to the heroes of 9/11, the photographer Joe McNally spent three weeks shooting life size photographs of firemen, police officers, emergency service workers and some ordinary folks in extraordinary circumstances. The result is the "Faces of Ground Zero, Portraits of the Heroes of September 11, 2001" a book and traveling exhibition that is now on view at the Time Warner Center at Columbus Circle. Spread over the ground and second floor of this shopping and residential complex are dozens of huge Polaroid photographs, each with a caption and many with a current digital image alongside. The exhibition is mesmerizing.

Staring into the eyes of John Baldassare, a Lieutenant with Ladder 9 Engine 33 FDNY a firehouse that lost most of its men; Peter Regan, a United States Marine who searched the rubble looking for his Dad, a firefighter; Michael Lomonaco, Executive Chef at Windows on the World who happened to run an errand that morning and avoided the fate of most of his co-workers; Lisa Beamer, widow of Flight 93 hero Todd "Let's Roll" Beamer, and America's Mayor, Rudy Giuliani, was to relive the episode all over again.

For me the most touching photograph was of Jan Demczur (see left), a window washer who became trapped in an elevator with five other people on the 50th floor. Mr. Demczur used he squeegee to open the door and was faced with a wall of plasterboard. For 95 minutes, Mr. Demczur and his fellow prisoners chipped away with the metal blade of his wiper to make a one foot by 18 inch opening through which, one by one, they were able to escape. Mr. Demczur's comment, "I can't talk about it" was all that needed to be said.

I, like many other people, shed a lot of tears in the days and months that followed September 11, 2001. For the first time in a long time this exhibition brought tears to my eyes again. Not macabre but respectful and honest, it is a tribute to the human spirit and the power of freedom.

We Will Never Forget 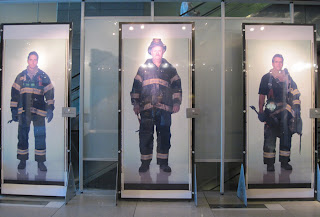 Posted by Georgina Kelman at 5:18 PM No comments: