El Greco to Velázquez - At The MFA Boston

The 17th Century has been called Spain's "Golden Age" when art and literature flourished and artists served to glorify the King, his Court and the Catholic Church. Indeed, it was an era of unprecedented creativity as the masterpieces of the age will attest. This spring and summer, visitors to the Museum of Fine Arts, Boston, had the extraordinary opportunity to see an outstanding selection of paintings, drawings and sculptures created by some of Spain's finest artists during the reign of Philip III (1598-1621).

Every monarch has an effect on the art created during his/her rule and Philip III was no exception. For the first time the nation's government was opened to participation from nobility and the King was profoundly influenced by his favorite advisor, The Duke of Lerma, a passionate supporter of the arts. The ongoing Protestant attacks against Catholic imagery also served to strengthen the monarch's dedication to promoting artistic expression of religious devotion. And the typical regal desire to leave an enduring and majestic legacy caused Philip III to initiate massive building and decoration campaigns and to assemble an impressive art collection of his own.

The exhibition "El Greco to Velázquez: Art During the Reign of Philip III" presents the best that the era had to offer. The galleries are hung with magnificent late El Grecos' such as "The Vision of Saint John", 1608, Peter Paul Rubens' huge portrait "The Duke of Lerma", 1609, a superb life-size polychrome sculpture carved by Gregorio Fernandez of Saint Ignatius Loyola in 1622, the year he was made a Saint, Juan Bautista Maino's sumptuous rendition of "The Adoration of the Magi", 1612, and Felix Velázquez's more humble but equally mesmerizing 1619 interpretation of the same theme. 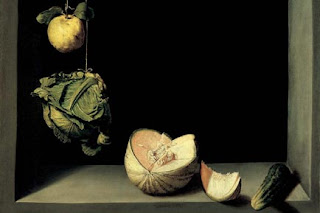 Juan Sánchez Cotán
"Still Life with Quince, Cabbage, Melon and Cucumber", c. 1600
The last gallery provided a wonderful surprise when the subject veered from traditional portraiture and religious iconography and turned to the relatively avant garde genre of still life paintings. Here the viewer was treated to a trio of still lifes of suspended fruits, vegetables and fowl presented in a totally realist style by the Spanish master Juan Sánchez Cotán. As modern now as they were outrageous then, these exquisite oils are true to life and almost photographic in their detail. Also intriguing was a small painting of a dish of pears by an unknown artist. What seemed like a simple depiction of a plate of fruit was actually a very complex attempt to paint the pear from every angle on one canvas and to push the 17th Century envelope in the fields of observation and depiction.

For those of you who consider Old Master works as just so many images of the Agony of Christ, please, take another look. These Spanish artists really knew how to paint and their work remains as compelling and contemporary now in the 21st Century as it did 400 years ago.
Posted by Georgina Kelman at 5:51 PM No comments:

While Frank Lloyd Wright (1867-1959) is considered to be one of the greatest American architects of all time, his personal life remains almost as intriguing as his professional career. Born in Wisconsin to a family of Unitarian ministers, Wright showed a gift for creating and building as a kindergartner and began his formal studies in architecture as a very young man. He was soon hired by the Chicago firm of Adler & Sullivan and within a few years was designing residences known as "Prairie Houses", extended low buildings with open floor plans, that were revolutionary in plan and very popular.

It was a commission for a Prairie House in Oak Park, Illinois, that opened the door for a series of events that forever impacted his personal life and more recently set the stage for a marvelous novel by Nancy Horan. "Loving Frank" follows the illicit romance between the architect, married at the time to Catherine "Kitty" Tobin and the father of 6 children, with Martha "Mamah" Borthwick Cheney, who, with her husband Edwin, hired Wright to design their home in 1903. By the standards of the time, Mamah Cheney was a "modern woman" - educated, independent and had interests outside the home. Frank Wright had a reputation as a "man-about-town" and before long an irresistible attraction developed between the two and they fell in love. It was, at first, a clandestine relationship, but in 1910 Frank Wright left for Berlin to work on a portfolio he was publishing with Ernst Wasmuth, and Mamah soon followed him, both leaving their spouses and children behind.

The novel follows their lives as the romance is kindled, their year in Berlin and Italy, Mamah's connection and translation work for the Swedish feminist Ellen Key, and the couple's return to the United States. The affair had made headlines in their absence and the homecoming was not an easy one. While Edwin Cheney finally agreed to a divorce, Kitty Wright was not giving in, and Frank and Mamah were greeted by a hostile press and a drying up of funds as clients demonstrated their disapproval by reneging on commissions.

Eventually Frank Wright persuaded his mother to sell him a large piece of property in Spring Green, Wisconsin, where he began building a home that would embody his principals of "Organic Architecture" and provide a self-sufficient sanctuary for he and Mamah. That home was Taliesin. Their paradise was not to last however. In 1914, Mamah, her 2 children, and 4 employees were hacked to death as a deranged servant set fire to the house and killed as many as he could inside.

Here is where the story ends. Not a happy ending, but a powerful one, and a gripping climax to a very good read. Frank Wright went on to fame and fortune, 2 more marriages and another child. His architectural masterpieces include "Fallingwater" in Bear Run, PA, the Solomon R. Guggenheim Museum in New York, NY and the Imperial Hotel in Tokyo, Japan, and his legacy has achieved a cult status. "Loving Frank" is a historically accurate and very well written look at this American icon's early life and career.
Posted by Georgina Kelman at 9:35 AM No comments:

J.M.W. Turner at the Met 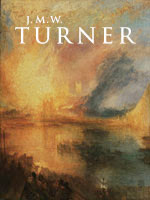 The first major American retrospective of the work of Joseph Mallord William Turner (1775-1851) opened early in July at the Metropolitan Museum of Art and will run through the summer season. This is a big show in several respects - in volume of material (150 works), in the oversize format of the paintings, and in the larger-than-life reputation of Turner as a gifted, prolific and innovative artist.

J.M.W. Turner was the son of a barber and wigmaker and grew up in the Covent Garden area of London. His prodigious talent was recognized at a very early age and he was admitted to the Royal Academy at 14 where his work was selected for exhibition the following year. Turner became known for his landscapes done in the style of the "sublime" aesthetic that featured images of nature in its wild, savage state. His early watercolors and oils of remote castles in North Wales, of marine scenes on stormy seas, of alpine treks through treacherous snowstorms and of epic historical events, all evoke the grandeur and the tumult of the moment. 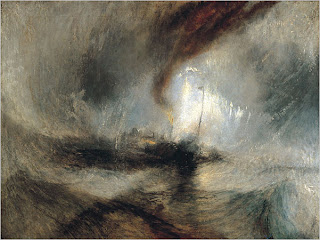 He later moved to a more light-filled and warmer palette and then to a style that can only be described as abstract-before-its-time. Disparaged by critics as "the fruits of a diseased eye and a reckless hand", Turner's canvas' can now be recognized as genius - avant garde art during the Victorian era. His depictions of the burning of the Houses of Parliament (1834), which he witnessed first hand, are masterpieces of abstraction and his late, unfinished paintings are precursors to 19th Century Impressionism. 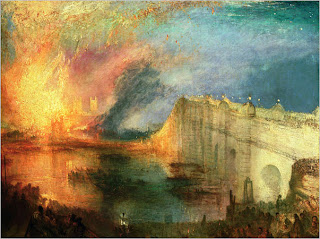 I tend to agree with the New York Times critic Roberta Smith's comment that this is a "beast of a show" that can "win you over or wear you out", and would venture to say that a little Turner goes a long way. But the overall impact is one of discovery and a new appreciation for the work of this British master of the landscape painting. J.M.W. Turner is on view until September 21.
Posted by Georgina Kelman at 4:00 PM No comments: