Alfred Kubin at the Neue Galerie 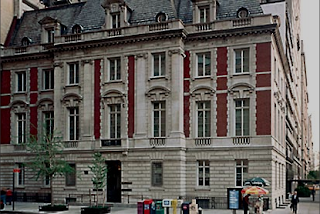 At the corner of Fifth Avenue and 86th Street stands an elegant limestone and brick Beaux Arts mansion that was built in 1914 as the home of industrialist William Starr Miller. In 1994 the building was purchased by entrepreneur and philanthropist Ronald Lauder and his great friend the art dealer Serge Sabarsky, who undertook an extensive restoration of the premises. Mr. Sabarsky passed away in 1996, but Mr. Lauder continued the project alone and the Neue Galerie was unveiled to the public in 2001. Part showcase of Mr. Lauder's superb collection of Austrian and German Art and part tribute to his late friend and mentor, the Neue Galerie presents both special exhibitions and selections from its own magnificent permanent collection. 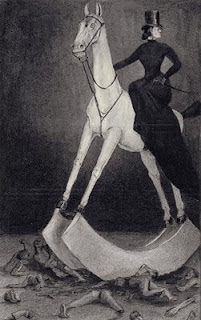 Now on view is "Alfred Kubin: Drawings, 1897-1909". This is not a cheery holiday show, but it is an interesting one. Alfred Kubin was born in Austria in 1877 and after a very traumatic childhood and an erratic education, he emerged as an excellent draftsman and a promising artist. Plagued with anxiety, sexual paranoia, an obsession with death, murder and suicide, he became the prototypical "tortured artist" and created exquisitely rendered drawings of bizarre and macabre subjects. Think Max Klinger, Francisco Goya, Félicien Rops or Edvard Munch and the dark, hallucinatory worlds they created and you'll have an idea of what's in store! Take for example "The Lady on the Horse" (right), where a rider on a rocking horse is blithely chopping people into pieces with the blades of the rockers. Or a 1900 drawing of a nude woman leading a trail of heads and skulls and entitled "Earth Mother to Us All", or ... well, you get the picture.

This is the first major U.S. retrospective of Kubin's work, and it has a certain morbid fascination. The premonitions of the horrors of World Wars I and II are indisputable and the irony of a contemporary of Sigmund Freud exhibiting such graphic sexual deviations is delicious. If you are still interested to go, the show runs until January 26, 2009.
Posted by Georgina Kelman at 4:28 PM No comments:

Finding Your Inner Child at Christmas!

If the holiday spirit seems to be escaping you this season, I have a couple of suggestions guaranteed to delight even the most determined Scrooge! 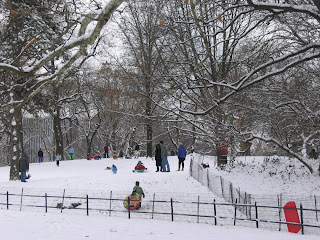 Instead of grousing about the weather, why not make the best of it and go outside! Yesterday's winter storm turned Central Park into a Winter Wonderland and children of all ages were playing in the snow. It always amazes me how families living in cramped New York City apartments manage to store all manner of sleds and skis to be pulled out at the first sign of flakes. Every hillock was alive with toboggans, "flying saucers", and even cookie sheets transformed into magical sleighs. Shrieks of delight came from old and young as they whizzed across the frozen earth and landed in a poof of powder! Just walking along the frozen pathways lined with snow laden trees is a beautiful reminder of the glory of nature, the eternal changing of the seasons and how lucky we are in so many ways.

If you don't feel like bundling up, here's another suggestion! Hail a taxi and go over to the Whitney Museum of American Art on Madison Avenue at 75th Street. Now showing on the 4th floor is a marvelous exhibition "Alexander Calder - The Paris Years 1926-1933". Of course, Calder is a serious and very respected artist, but his early works, and to some degree his later ones, are infused with a joy and imagination that can only be referred to as "childlike". This exhibition focus' on the 7 years he spent in Paris, years that had a profound influence on his art and the period in which he created some of his most magical work. 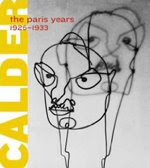 When Alexander "Sandy" Calder (1898-1976) arrived in Paris, he did so with the express intention of becoming a painter. Instead, he soon traded two dimensions for three and instead of paint or pencil, he worked in wire creating amusing caricatures of friends and popular personalities and animals of all kinds. His fascination with the circus, an obsession of many artists over time (think Seurat, Chagall and Picasso), was ultimately expressed with his collection of miniature figures that he manipulated in performances for friends and paying customers. His "Circus" became a proto "Performance Art" that appealed to the Modernists' love of play and spectacle and fascination with fun mixed with death and danger (what happens if the knife thrower misses?). Calder's admirers included Marcel Duchamp, Fernand Léger and Joan Miró, but it was a visit to the studio of Piet Mondrian in 1930 that abruptly and completely changed his art. 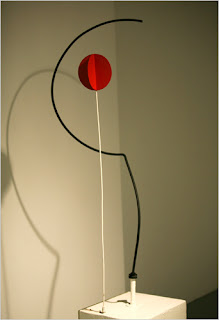 From the fantasy of wire beasts and figures to the abstraction of solidly colored metal and wood sculptures that moved, either on their own or with the help of a crank or motor, the evolution was dramatic and permanent. Calder's new work fell, for the most part, into two categories - "Mobiles", constructions that were suspended and moved, and "Stabiles", similar in feel but stationary. These kinetic sculptures explored the ideas of balance, flight and movement in a whole new way and became the basis for the rest of Calder's career.

It is impossible to visit this exhibition without smiling! Early videos show the artist performing his "Circus" with a flair and sense of humor that is contagious. This sense of joy and anticipation is carried through to the last gallery where "Percussive Instrument" consisting of a suspended lead ball and smaller sphere swing around randomly striking objects in their paths and making "music". It is fabulous.

So forget that you haven't written your Christmas cards or your cranky Aunt is coming for the holidays - do yourself a favor and give in to the wonder of the season by releasing your inner child!
Posted by Georgina Kelman at 5:00 PM No comments:

There was a lot of nervous anticipation leading up to this year's edition of Art Basel::Miami Beach. It seemed safe to assume it would not be a repeat of the frenzy of the past few years, but how much of a correction would there be? Committed dealers braced for the worst and shipped their crates to South Florida with a prayer that they would not return just as full.

Wednesday afternoon was the moment of truth - the show opened to VIP collectors at noon and continued with staggered entry times until 8 PM. It was a cool December day in Miami, but the mood inside the Convention Center was anything but. Collectors, curators and dealers were there en masse and having a marvelous time! It was Art Basel after all and tout le monde had descended on Miami for the art, for the parties and definitely for the beach! It was the same glamorous crowd, the same cacophony of languages and the same cornucopia of modern and contemporary art. 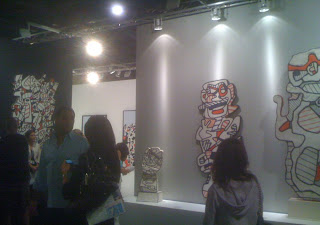 However it cannot be said that it was the same rush to buy whatever was offered at whatever the price. Everyone, both exhibitors and visitors was aware of the current economic problems, the recent auction results and the importance of this fair in the global art market. Dealers had adjusted their projections and had brought more mid-priced material. Buyers had toned down their hysteria and were taking the time to look and think and do some research. The result was a much calmer, more reasoned and less frantic atmosphere and that's not a bad thing at all. 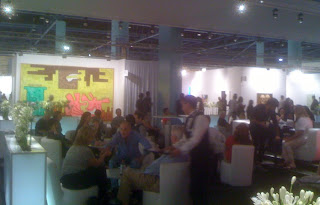 The next day brought warmer weather and a heating up of sales! I visited several of the satellite venues (there are 17 this year - down from 22 in 2007) including Art Miami, Photo Miami and SCOPE, and each one was very well attended and the exhibitors seemed quite pleased. One dealer, whom I trust to tell me true, said it was better than last year, and no one I spoke to was deeply disappointed. A return visit to the main fair today reflected the same cautious optimism and relief that the event was not a bust. The art market may not be booming, but it is alive and well and working in Miami! 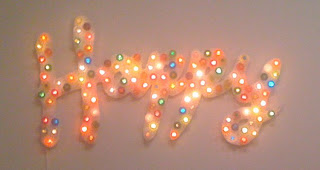