I've been walking around New York a lot in the past few days in the quest for the perfect holiday gifts and food, and am overwhelmed at the number of out-of-towners jamming the sidewalks and stores. What are all these people doing in my town, getting in my way, I wondered to myself. And then I finally opened my eyes and instead of seeing the visitors as impediments to my path, I realized something that often gets overlooked when pressed for time at the holidays - New York is a beautiful place to be at Christmas! 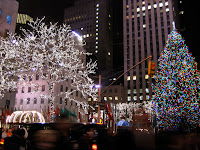 There is a reason why Times Square is impassible on a Saturday evening in December - the magical lights of the billboards and theater marquis promise fun and excitement and glamor! The magnificence of Rockefeller Center with its skating rink and splendid Christmas tree is a sight that should not be missed. This year's tree comes from Sheldon, Connecticut, and is an 84' tall Norway blue spruce decorated with over 30,000 colored lights. Only the most jaded New Yorker could fail to be impressed!

Look across Fifth Avenue to see the huge lighted snowflakes decorating the facade of Saks, and then go uptown past the twinkling of the Cartier boutique, the amazing window displays of Bergdorf Goodman, and the lines of children and adults waiting to get into FAO Schwartz toy emporium! It's Christmas, whether you're ready or not! Walk up Park Avenue in the evening and enjoy the lighted trees adorning the medians of every block from 48th to 97th Streets. Nothing sparkly, just a quiet holiday tradition that has illuminated this stretch of avenue for many years.

A visit to the Metropolitan Museum of Art is a must for any visitor to New York. Aside from a superb permanent collection, this cultural landmark is known for outstanding special exhibitions throughout the year. But one annual event holds a special spot in the hearts of many New Yorkers - from Thanksgiving to Epiphany the Met displays its beautiful Neapolitan Christmas Tree in the Medieval Sculpture Hall. Donated by Loretta Hines Howard in 1964, this 20' faux blue spruce is covered with 18th Century angels and cherubs who gaze down at the crèche and nativity scene at its base. Complete with carols and medieval music, this tree always makes me think of Christmas' past and the joy of Christmas future.

Other institutions offer other Christmas themes - like the Origami Christmas Tree at the American Museum of Natural History, or Tavern-on-the-Green's over the top Christmas decorations and ice sculptures, or Lincoln Center's beautiful tree adorned with Wedgewood ornaments depicting musical, theatrical and dance arts.

A British family stopped me for directions in Central Park the other day. As I walked them to where they were going, they told me excitedly about the sights they had seen and the great meals and shopping they had enjoyed. They told me how sad they were to leave New York but that they certainly hoped to return one day soon. And I thought to myself, thank goodness for all these many visitors who come to New York for the holidays and open our eyes to the wonders of this magnificent city. Welcome, and Merry Christmas!
Posted by Georgina Kelman at 2:19 PM No comments:

The 2007 edition of Art Basel Miami Beach is almost over and by all accounts it was an even bigger and better event than last year. 40,000+ visitors, 200 exhibitors in the Miami Convention Center and 23 spin-off art fairs held throughout Miami Beach and the Wynwood District of Miami proper make this the global event of the year for Modern and Contemporary art.

The main fair, Art Basel Miami Beach, remains the focal point of this week-long art extravaganza. This is where the really big name galleries are showing (and selling) their really high ticket works of art and it is the first stop for the serious collector. After that the choices are staggering - Art Miami, PULSE, Scope, Red Dot, NADA, Aqua, INK and Photo Miami are just a few of the ancillary venues for hard core art enthusiasts. It is a veritable "Movable Feast" as collectors shuttle between these fairs on buses, vans, pedicabs, and by foot in an effort to see as much as possible and hopefully find something great to buy.

I did not even attempt to visit every art fair, but I did go to a few and saw some really exciting art. A lovely selection of paintings by Guy Pène du Bois was on view at James Graham & Sons at Art Miami. Also at Art Miami was a marvelous painting by Tamara de Lempicka on the stand of Barry Friedman, one of the foremost dealers of art deco paintings, furniture and objects in the United States. 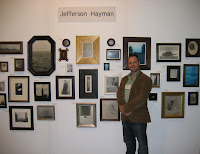 The Keith de Lellis Gallery displayed a fine group of Man Ray photographs of jewelry by Elsa Triolet, the wife of Louis Aragon, a founder of the Surrealist Movement in 1924, at the AIPAD Photography Show. Also at AIPAD, on the stand of Michael Shapiro Photographs, was a beautiful assembly of Jefferson Hayman's thoughtful vintage-style still-life images. On a more contemporary note, there were wonderful installation pieces by Sami Ben Larbi ("The Distinction Between a Carthaginian and a Hexadecagon, in the Subjunctive" a film piece) at Aqua, Rachel Perry Welty ("Ionic Column" a site-specific sculpture) at Art Miami, and a work by a Brazilian woman artist whose name I could kick myself for not noting down but it involved hundreds of light bulbs with the metal chains hanging down in an audience participation piece that was absolutely beautiful, at Art Basel Miami Beach. 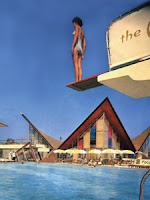 Art Basel Miami Beach has been adopted and promoted by The City of Miami and everybody seems to get involved. There are special museum shows like "Promises of Paradise: Staging Mid-Century Miami" that opened at the Bass Museum of Art on Wednesday night with a huge reception party in the courtyard. This look back at the post-World War II development of Miami Beach focus' on the vision of urban planners, architects and designers who took a small Florida town and turned it into a metropolis and an international destination. It was more than a trip down memory lane, it was a tribute to men like Alfred Browning Parker, Morris Lapidus and Kenneth Treister who could see the potential and whose genius created the Miami that is now legend.

We have been blessed with fabulous weather during the past week which of course makes this art fair even more enjoyable. For all the great art, not-so-great art, beautiful people and fun parties, I think it is the sun and sand of Miami Beach in December that really makes this fair special! Tomorrow morning will be the last dip in the ocean, and then it's back to the cold and snow. But New York at Christmas has its own special charm - of course it all looks much better with a suntan! 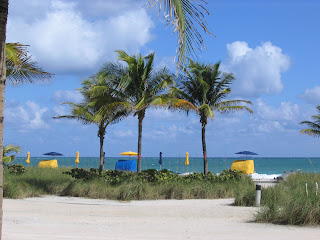 Posted by Georgina Kelman at 1:02 PM No comments: