The Roman Mosaic from Lod - At the Met

It is not often that I make a trip to a museum just to see one specific work, but last weekend I decided to walk over to the Metropolitan Museum of Art and view the much publicized Roman Mosaic from Lod, lent by the Israel Antiquities Authority and on view in New York until April 3rd.

I wasn't really sure what to expect. The reviews referred to this artifact as remarkable and historic but it was, after all, just one piece from a region that is steeped in antiquities. As I walked through the Met's Greek and Roman galleries, not my usual department in this multifarious museum, I checked out the marble sculptures of emperors and the terracotta vases with black figures of gods and bronze vessels for transporting and storing water and was once again amazed at the civilization that existed long before the initials "A.D. Anno Domini" were even necessary. Then I came into the room with the mosaic from Lod and I realized what all the fuss was about! 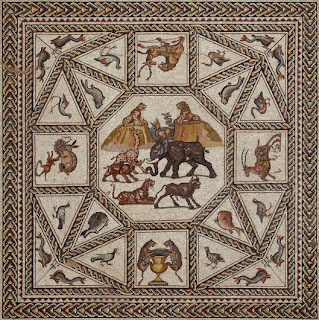 There on view was an enormous mosaic tile floor as colorful and intricate as a Persian rug. The three component panels together measure fifty by twenty seven feet and are in almost pristine condition considering they are probably about 1,700 years old! Discovered in 1996 by a highway construction crew working near the city of Lod, formerly Lydda, a modern city not far from Tel Aviv, the mosaics had laid buried under literally centuries of rubble, forgotten but protected. A top archaeological team was dispatched and the newly revealed treasure was carefully excavated. But what to do next? Removing the debris had exposed the mosaics to the dangers of the elements and they were rather inconveniently located in the middle of an area cited for development.

The process of removing and conserving these ancient mosaics is documented in a short video playing continuously next to the pieces themselves. The fascinating film shows the team carefully lifting sections of the floor to be transported to a lab where they could be cleaned, preserved and studied. Discoveries such as ancient footprints in the mortar present new clues for archaeologists to ponder and may offer insights into the construction process itself.

What I found the most intriguing about the mosaic were the components and complexity of the design. Animals, birds and sea creatures co-exist on the canvas of this stone "carpet" separated into panels by intricate cable and scroll decorations. Exotic African beasts such as rhinoceros', giraffes and tigers pose on rocky landscapes. Merchant ships sail amid schools of fish, dolphins and sea monsters. Peacocks preen, lions roar and a leopard attacks a gazelle. The animal kingdom is represented in every form.

What was once an important decoration in a wealthy person's home is now a fascinating clue to ancient society. While we cannot determine whether the resident was pagan, Jew or Christian, we can certainly tell that he was a cultured man and a lover of the finer things in life. What luck to have this legacy to marvel at so many centuries later!

Posted by Georgina Kelman at 1:36 PM No comments: 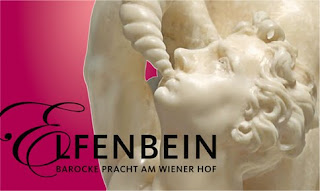 Another highlight of my recent trip to Frankfurt was a small but wonderful exhibition of Austrian Baroque Ivories at the Liebieghaus Sculpture Collection. Housed in the former Liebieg Villa situated on the Main River, the collection spans five thousand years of sculpture from Ancient Egypt to Neoclassicism. In cooperation with the Kunsthistorisches Museum Wien [Vienna Art History Museum] the Liebieghaus is now presenting a special exhibition that explores the finest of ivory carving produced in Vienna during the reigns of Prince Karl Eusebius von Liechtenstein (1627-1684) and Emperor Leopold I (1658-1705).

Now this may seem like a very dry topic, and I cannot truthfully say that it was on the top of my "to do" list while in Frankfurt, but I had been given passes to the show and thought why not? I was glad I did - the show was exquisite.

Works made of ivory have had an exotic appeal since ancient times but the demand for this rare material imported from far away places reached its apex during the 17th Century in Vienna. Austrian royals were wild about ivory carving and commissioned works by accomplished artists as well as practiced the craft themselves. On display are 35 intricately carved goblets, pitchers, bowls, statuettes and plaques by masters of the art and a tankard by the Emperor Leopold. The subjects vary from Adam and Eve in the Garden of Eden to Bacchanalian feasts to the Allegory of the Elements of Water and Air (see left) to pastoral hunting and fishing scenes. Each work is rendered in infinite detail and the sheen of the ivory makes it look almost artificial.

Of course ivory is now a protected material and the massacre of elephants and walrus' for their precious tusks is a thing of the past. The art of ivory carving has been replaced with more modern pursuits but we can still admire the artistic genius and magnificent workmanship that thrived in Austria during the heyday of ivory art. "Ivory: Baroque Splendor at the Viennese Court" is on view until June 26th.
Posted by Georgina Kelman at 4:30 PM No comments:

"The marvelous is always beautiful; everything marvelous is beautiful; nothing but the marvelous is beautiful!" wrote the Father of Surrealism, André Breton, in the "First Surrealist Manifesto" in 1924. With this proclamation Dada was dead and the floodgates of Surrealism had opened to engulf the worlds of art and literature with its revolutionary ideas. The Surrealists sought to provoke and amuse both themselves and their audiences in an effort to challenge established ideas of society. One of their primary tools for accomplishing this goal were "objects" - often ordinary items used in an extraordinary way thereby causing the viewer to re-assess his prior beliefs.

There have been many exhibitions of Surrealist Art in the past few years, but never one that focused exclusively on these fundamental objects. Last week I had the great pleasure to be present at the opening of "Surreale Dinge. Skulpturen und Objekte von Dali bis Man Ray [Surreal Objects. Sculpture and Objects from Dali to Man Ray]" a fabulous show at the Schirn Kunsthalle in Frankfurt, Germany. This was an extra special event as it was also a celebration of the 25th Anniversary of the museum and it was quite a party! But let's begin with the exhibition...

The curator, Dr. Ingrid Pfeiffer, and her team had a very clear vision of what they did not want the show to be. They did not want a staid, formal presentation of well-known pieces shown like specimens under glass. Instead they, like the Surrealists themselves, threw off museum convention and created a salon with reproduction 1930s furniture made of painted black plywood against an almost kitschy maroon flocked wallpaper. The works on display were primarily three dimensional sculptures, rather than two dimensional paintings, and were set on platforms in the open air. The result was that there with nothing between the viewer and the art which, for the most part, made it much more present and accessible. 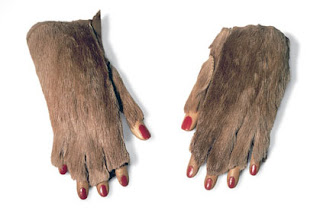 Another goal of the organizers was to avoid the clichéd ideas of Surrealism and to present fresh material to the public. In what must have been a treasure hunt worthy of Robert Louis Stevenson, Dr. Pfeiffer managed to accumulate 180 amazing pieces by 150 different artists, many of whom were quite obscure. 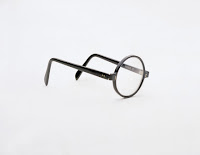 But as I said, this was a double celebration! In honor of the museum's silver jubilee a special fireworks presentation was commissioned! Despite a light rain, "Time Tower" lit up the night sky and excited onlookers cheered the beautiful pyrotechnic display. It was a great commemoration of two wonderful events and I was thrilled to be a part of it!

Posted by Georgina Kelman at 1:21 PM No comments:

Edward Hopper at the Whitney 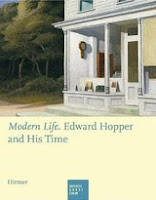 It would be an understatement to say that the first half of the twentieth century was a time of incredible change. Between the popularization of the automobile and electricity, two world wars and women gaining the right to vote there was very little left untouched. Art was no exception and here in America that meant the development of Realism - a new school that reflected these social transformations on canvas. In an homage to an icon of Realism and its offshoots The Ashcan School and the American Scene painters, the Whitney Museum of American Art is now presenting "Modern Life: Edward Hopper and His Time".

Edward Hopper (1882-1967) was born to a middle class family in Nyack, New York, a ship building town on the Tappan Zee estuary of the Hudson River. His artistic talents were recognized at a very young age and he eventually studied at the New York Institute of Art and Design under the tutelage of William Merritt Chase and Robert Henri. The dawn of the new century saw a rejection of the refined themes of academic art and an embrace of a new, more representative style of painting that reflected the sensibilities of the day. 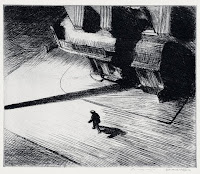 This exhibition centers on the work of Edward Hopper but incorporates pieces by other artists of the period as comparisons of styles and influences. For example, Hopper's dear friend Guy Pène du Bois' painting "Opera Box", 1926, shares the same flat, abstract, solidity as Hopper's "Early Sunday Morning", 1930. Another friend and colleague of Edward Hopper was the famous print maker Martin Lewis. Hopper avidly explored the medium of prints from 1915-1923 and the influence of his haunting "Night Shadows" (see left), 1921, can clearly be seen in Lewis' 1930 etching "Shadow Dance".

The parallels continue in the section on the Precisionists where Hopper's watercolors "Rooftops" (see below), 1926 and "Two Trawlers", 1923, share the formal geometries of nearby works such as Charles Sheeler's "River Rouge Plant", 1932. 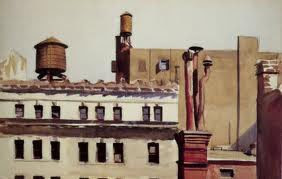 In the last galleries the focus shifts to American Scene painting - probably the genre for which Hopper is most well known. Here we see the influence of the time spent in small towns and on his beloved Cape Cod, Massachusetts, as depicted in classic American landscapes reinterpreted in his distinctive impersonal yet compelling style. Solitary, inscrutable, bold and detached, paintings such as "Seven A.M." (see below), 1948 or "A Woman in the Sun", 1961, evoke the perplexing, vaguely disturbing, sensation so typical of Hopper's work. 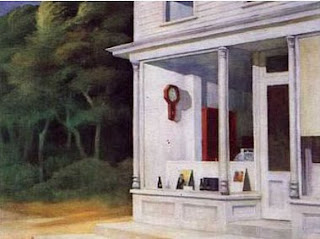 Edward Hopper's contribution to the American art scene was profound. In an era of remarkable change, his work had the ability to confront and disquiet but without a shock. In "Modern Life: Edward Hopper and His Time", the Whitney has successfully presented its extensive collection of works by Hopper in a fresh new way - by creatively and effectively comparing it to what else was going on in the art world one can far better appreciate the mastery of Edward Hopper.
Posted by Georgina Kelman at 11:35 AM No comments: