"A Strange New Beauty" - The Monotypes of Edgar Degas at MoMA

Asked to name the leaders of the Impressionist art movement and I'll bet Edgar Degas would be on most people's list.  But while Degas was certainly a founding member of the school, he ultimately rejected the movement and its practitioners finding it too controversial and outrageous.  The idea of painting en plein air was an anathema to Degas who believed that artists should comport themselves decorously in public and lead private lives of solitude.

Another difference between Degas and the Impressionists was his fascination with artistic mediums other than oil paintings.  He was a master sculptor with an enormous output of dancers and horses molded in bronze, he was a genius with pastel on paper, and, as a new exhibition at New York's Museum of Modern Art now shows, he was obsessed with monotype prints. 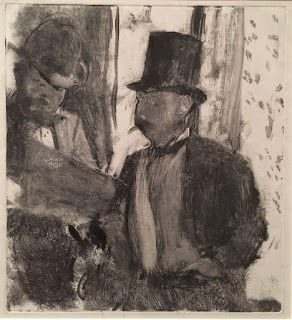 "The Two Connoisseurs (Les Deux Amateurs)", c. 1880
Monotype on paper mounted on board

Introduced to the technique by his friend the artist Ludovic Lepic, Degas took to the process like the proverbial duck to water.  He became infatuated with the medium's qualities of spontaneity and malleability as well as the anticipation of not knowing exactly what the final product would look like until the very end.

The monotype is a very specific printing method, unlike any of the usual intaglio, relief or planographic processes we are most familiar with.  By its very definition, a monotype is unique, one single print produced by drawing with ink, or in some cases oil paint, directly onto a metal plate, covering the plate with damp paper and running it through a press.  A combination of drawing and printmaking, a monotype cannot be reproduced over and over as the image has not been incised into the plate but must be re-drawn in ink each time.

The category of monotype prints can be further broken down into "dark field" and "light field" and Degas was a practitioner of both.  In a dark field monotype, a clean metal plate is covered with a layer of black ink which the artist then removes to create an image.  Using a brush, or fingers, or cloth or a sponge, the ink is drawn into, smeared, dabbed or scraped to create areas of light that are the image. 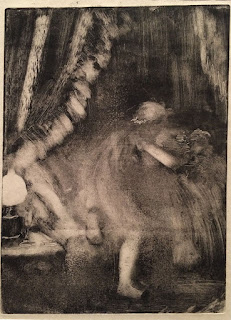 As you probably already guessed, a light field monotype is just the opposite.  Starting with a clean metal plate, the printers ink is applied, again using brushes, sponges, fingers or cloth, to create the image.  It is a process of adding, as opposed to subtracting, to draw the picture. 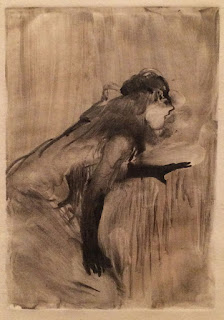 Degas worked in monotypes intensively in two bursts, from Lepic's introduction in the mid 1870s for about a decade, and again in the 1890s.  He approached the process enthusiastically, as a painter rather than a print-maker, intrigued by its possibilities for abstraction and depicting motion.  He worked in traditional black printers ink... 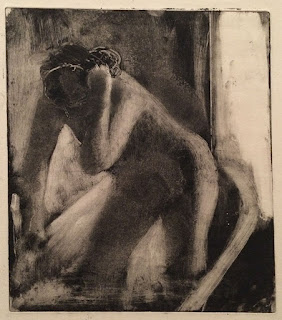 He also experimented with color oil paint, often to capture the effect of viewing a landscape from a moving train... 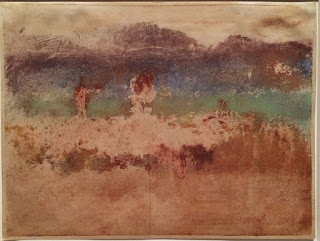 Occasionally Degas managed to do both a black and white and a color impression, a very rare achievement called a "cognate".  As I mentioned, a monotype is a unique print, but sometimes there is enough ink left on the plate to run it though the press a second time creating another impression less rich and more ghostly than the first.  Degas would then use pastel to color the second print, highlighting some areas and covering others so that the two works, side by side, are theoretically the same but actually quite different. 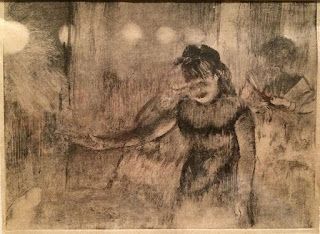 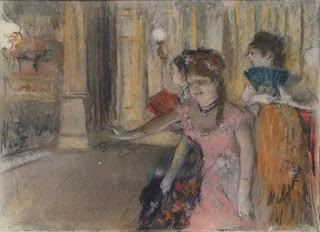 No show on Degas would be complete without a few examples of pure pastels and oil paintings of ballerinas and the final gallery of this MoMA exhibition provides quite a few lovely examples.  But for me these beloved images were superfluous after the revelation of his marvelous monotype prints.  "A Strange New Beauty" is on view until July 24, 2016.
Posted by Georgina Kelman at 3:27 PM No comments:

The Photography Show, presented by AIPAD

If it's April it's time for the annual Photography Show presented by The Association of International Photography Dealers, or AIPAD for short.  Now in its 36th year, the show features over eighty five dealers from Europe, Asia and the Americas displaying photographic works from the nineteenth century to the present day.

Some of the earliest examples of photography could be found on the stand of Hans P. Kraus Jr., New York.  Particularly rare was this round format 1852 salt print on paper of a "Church Facade" by French photographer Charles Nègre. 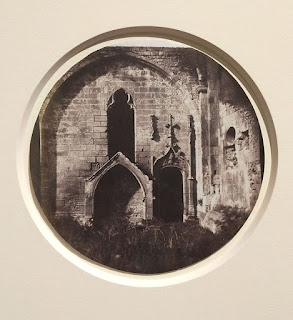 More salt prints were featured by the Gary Edwards Gallery, Washington DC, who offered this group of anonymous American portraits done in the 1850s. 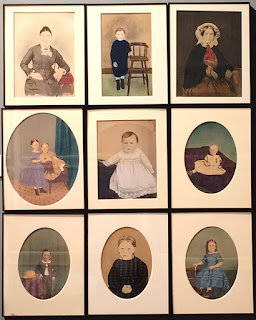 English photographer Eadweard Muybridge is best known for his early experimentation with time-lapse photography and motion pictures.  This example of locomotion study of a nude woman was on the stand of Baudoin Lebon, Paris. 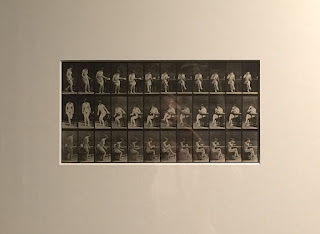 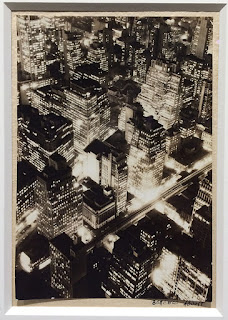 As I well remember when Neil Armstrong first set foot on the moon, I was drawn to this dye transfer print hanging at Keith de Lellis Gallery, New York.  This was not the actual moon walk, but a test run, executed in Houston and photographed by Ralph Morse. 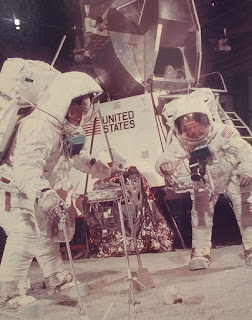 A 21st century look at a traditional subject was this triptych of European Cathedrals done by German photographer Marcus Brunetti.  These large format archival pigment prints drew a lot of attention to the booth of Yossi Milo Gallery, New York. 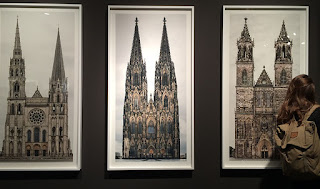 This series of fine art pigment prints by Simone Rosenbauer executed in 2014 and titled "Like Ice in the Sunshine" seemed to capture the promise of warmer weather to come.  They could be seen on the stand of Lawrence Miller Gallery, New York. 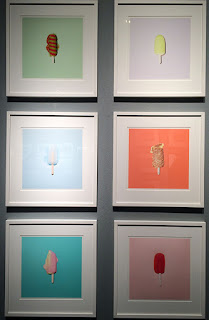 Another promise of sunshine and springtime was right outside the doors of the Armory.  I leave you with my own photograph of these gorgeous yellow tulips blooming on the Park Avenue Malls on a gorgeous afternoon in New York! 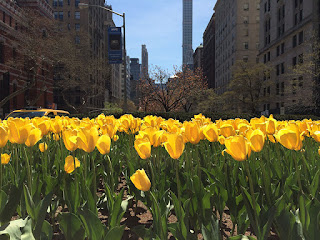 Posted by Georgina Kelman at 2:03 PM No comments:

"The Power of Prints" at The Met

In honor of the centenary of its fabulous Department of Prints, the Metropolitan Museum of Art is currently presenting "The Power of Prints".  Ostensibly a showcase of some of the department's outstanding holdings, the exhibition is primarily an homage to the vision of its founding curator, William Mills Ivins, and his protégé and successor A. Hyatt Mayor.  Together, Ivins and Mayor expanded and developed the Met's collection to create a body of work comprised not necessarily of the finest and rarest examples, but pieces that, taken together, conceptualized man's aspirations.

This exhibition presents works acquired during the fifty year tenure of Ivins and Mayor and is divided into sections based on printing technique.  Appropriately it begins with a gallery devoted to etchings as it was a gift of 3,500 prints, mostly 19th century etchings collected by Harris Brisbane Dick, that was the impetus for the foundation of the department.  Here we have beautiful examples by American etchers such as Mary Cassatt, Martin Lewis, James Whistler and Edward Hopper... 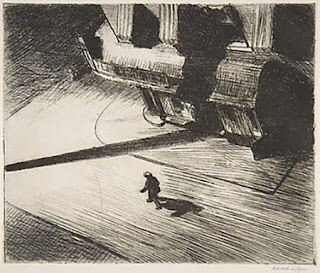 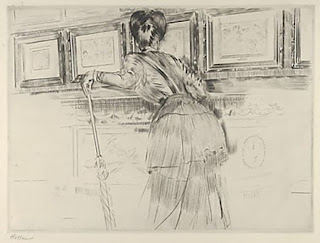 There is also a large selection of fine etchings and drypoints by Rembrandt drawn from the Met's nearly complete collection of the master's works. 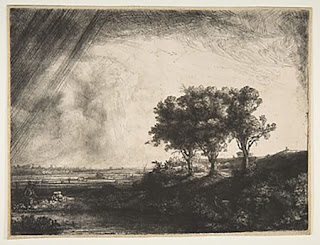 The next gallery presents a group of engravings, most notably a wall of works by Albrecht Dürer that is absolutely breathtaking. 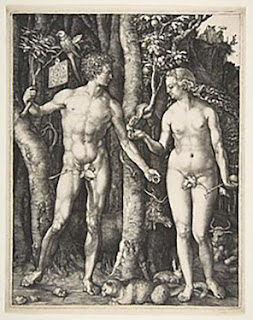 There is also a section dedicated to woodcuts, or wood engravings as they are also known.  Most of the examples presented were book illustrations with the volumes opened up to show the beautiful artwork cached within. 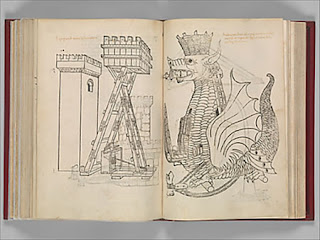 Roberto Valturio
"De Re Militari (On The Military Arts)", 1472 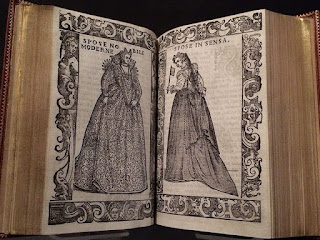 The third and final gallery is devoted to lithographs and featured both popular art, like posters and postcards, and "fine" art. 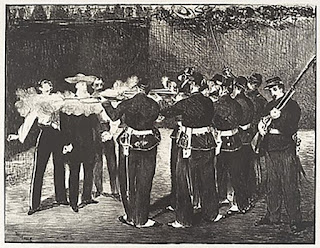 Edouard Manet
"The Execution of the Emperor Maximillian", 1868

Ivins and Mayor believed that prints opened windows onto everyday lives therefore advertising art was a prime source of sociological and historical information as well as being graphically arresting. 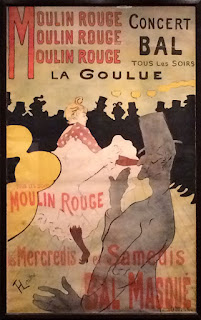 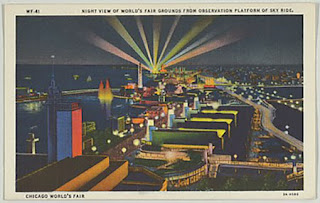 Today, The Met's collection comprises an impressive 1.2 million prints, plus 17,000 drawings and 12,000 illustrated books, making it one of the largest repositories in the world.  But it all began one hundred years ago with the vision of two men who believed that prints, and the dissemination of information through imagery, was the most democratic form of art and education, as well as a feast for the eyes!
Posted by Georgina Kelman at 6:08 PM No comments: