It's "Freezepocalypse" on the Hudson!

I don't think I can be accused of whining when I say that the February of 2015 has been brutal weather-wise.  While New York has been spared the record snowfall that buried Boston, we have been on the receiving end of the Siberian Express for weeks and weather forecasters are running out of terms to describe just how cold the air and wind chill temperatures will be.

So it was a very pleasant surprise this morning when the day started off with sunshine and relatively mild temperatures.  Determined to take advantage of this temporary relief from the bitter cold and wind, I bundled up and walked over to Riverside Park South to see for myself what people were referring to as "Freezepocalypse"!

It was an amazing sight!  Looking south with Manhattan on the left and New Jersey on the right... 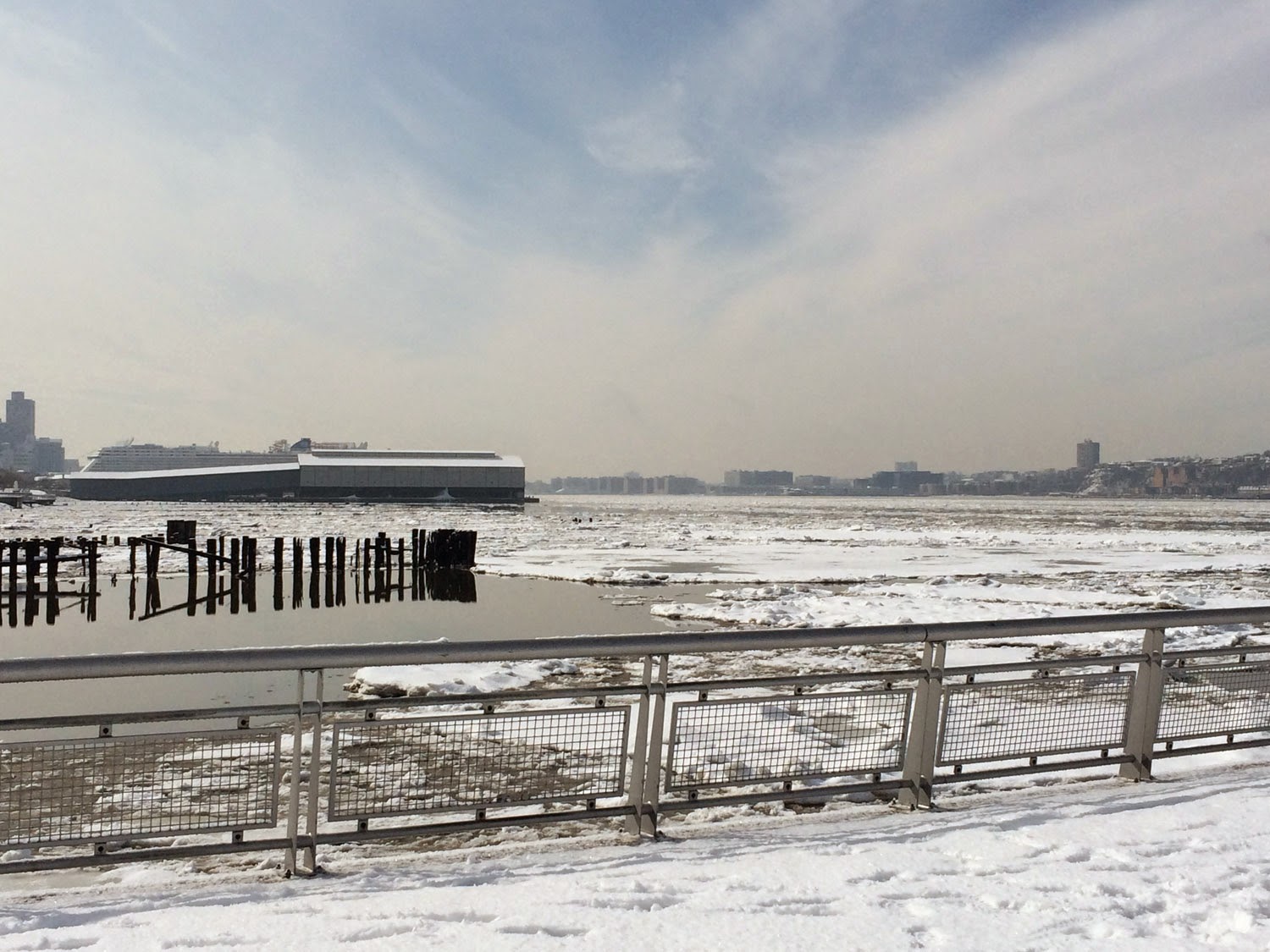 And north with New Jersey on the left... 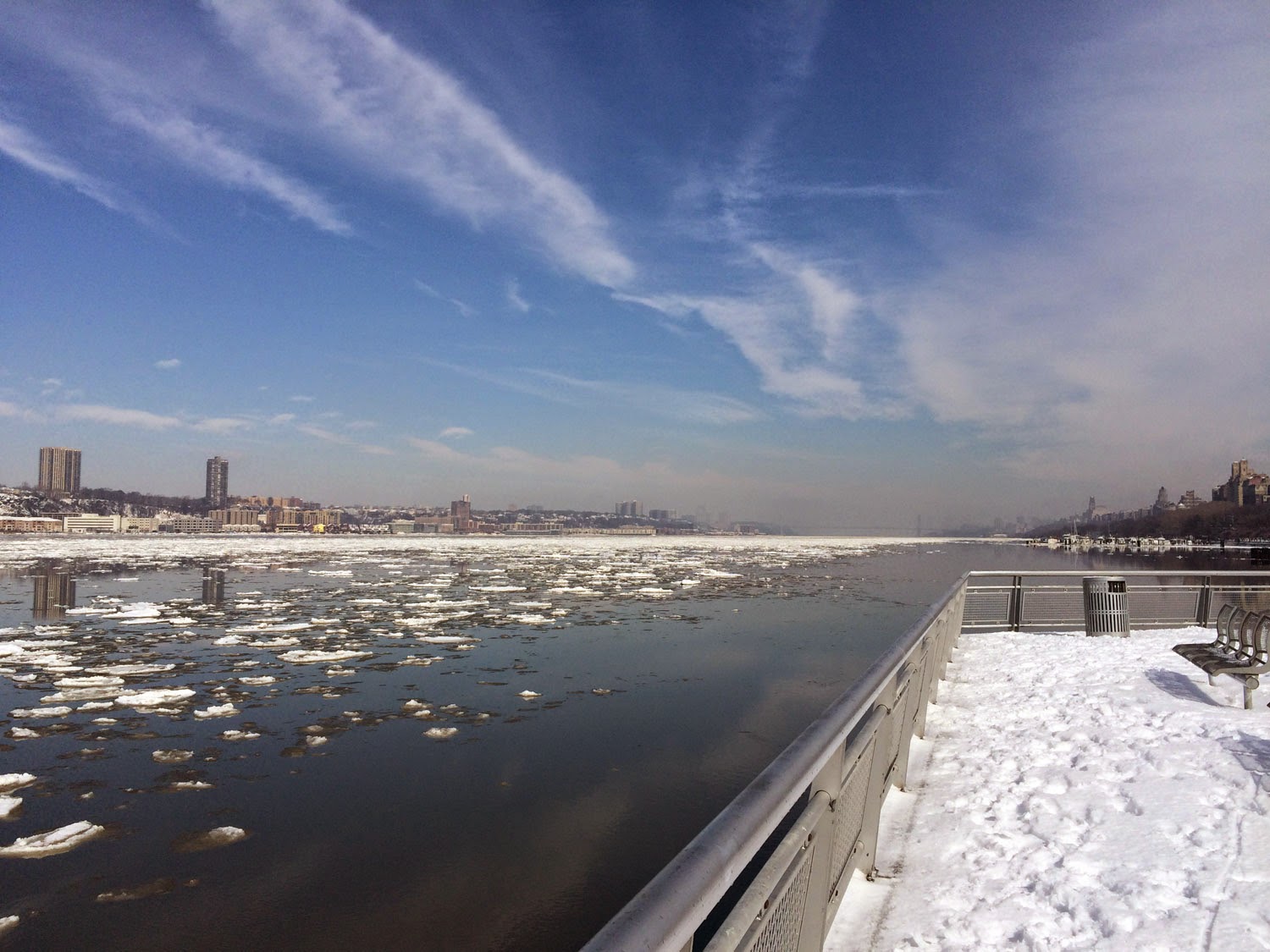 The mighty Hudson River was filled with snow covered ice flows that were drifting steadily up-river with the current.   The pier, usually alive with children playing, fishermen and roller bladers, was deserted.  A few hardy Canadian Geese hopped a ride on an ice berg... 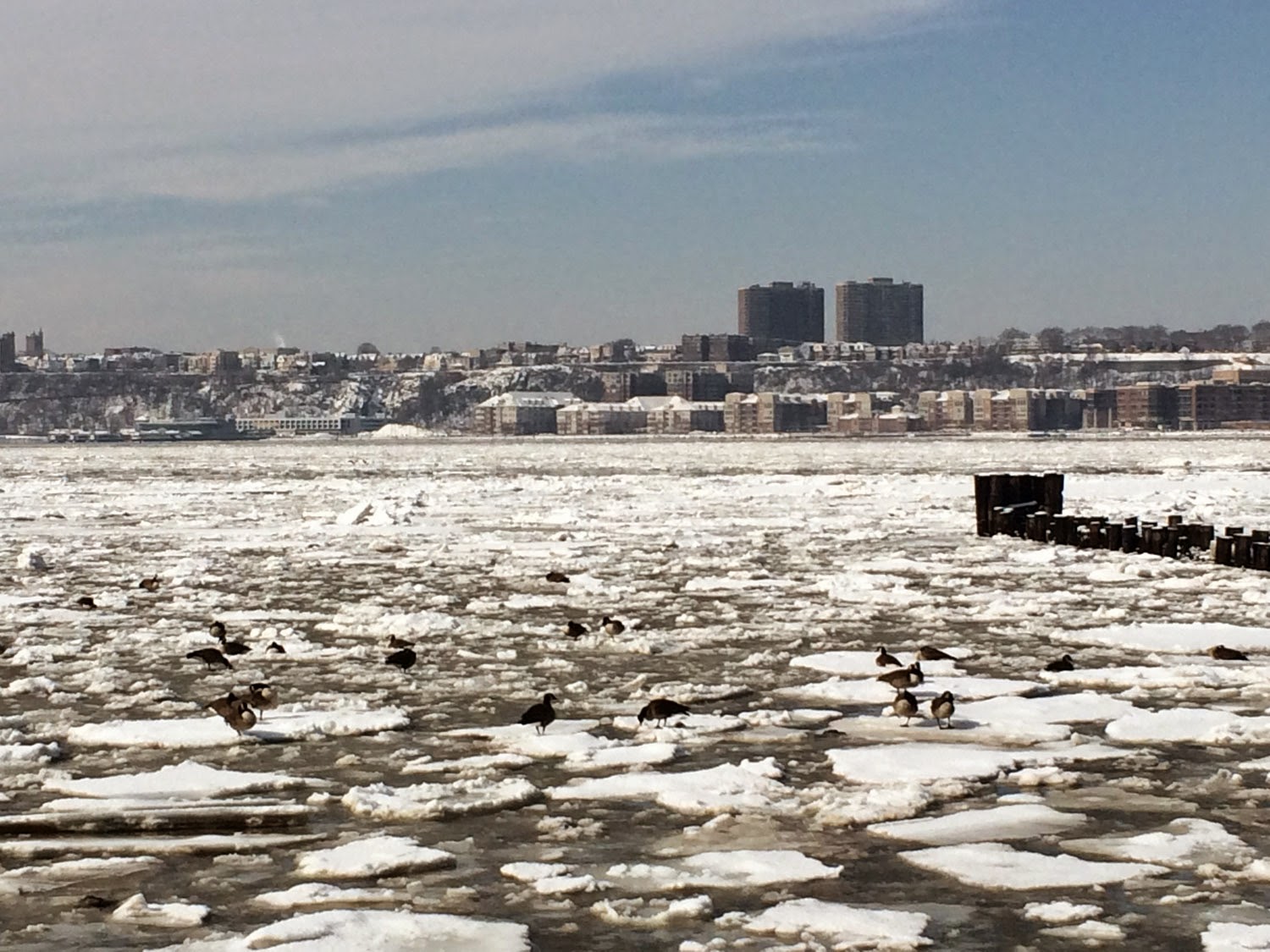 In the distance I could see some ferries and a cruise ship was in port - hopefully getting ready to depart for warmer climes!  With a calm wind and a brilliant winter sun I was actually quite comfortable but it was still rather laughable to read the notices advertising "Summer on the Hudson".  Maybe I should take a cue from these kids who were having a heck of a good time with their sleds on this beautiful winter day... 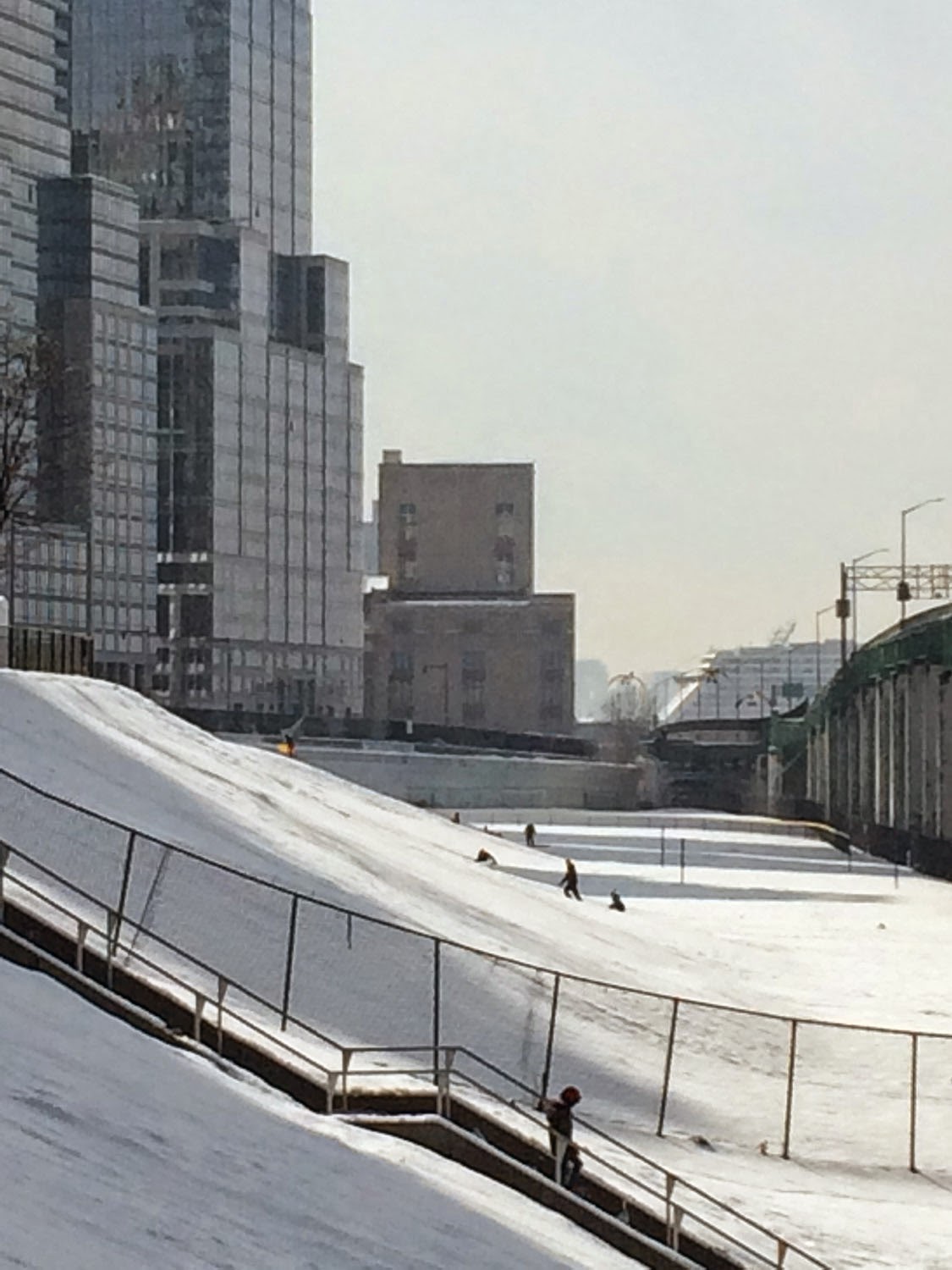 Or maybe I should console myself with the calendar that proclaims only 26 more days until Spring!
Posted by Georgina Kelman at 5:36 PM No comments:

A Winter Visit to The New York Botanical Garden

You may have seen on the news that New York City has been in the grip of a polar vortex that has plunged temperatures to record lows with a bone-chilling wind to add to the misery.  So when my good friend Betsy suggested we take a field trip to the New York Botanical Garden I did not leap at the invitation.  Nevertheless, when she elaborated that we would be attending a lecture on Le Jardin Français, and particularly the magnificent French formal gardens of the Château de Vaux le Vicomte, the idea did not seem quite so ludicrous!

So despite frigid temperatures we set off Thursday morning for the Bronx.  Not surprisingly the usually verdant grounds of the Botanical Gardens were completely covered in snow, but unlike Manhattan a few miles to the south, this snow was still white and quite beautiful! 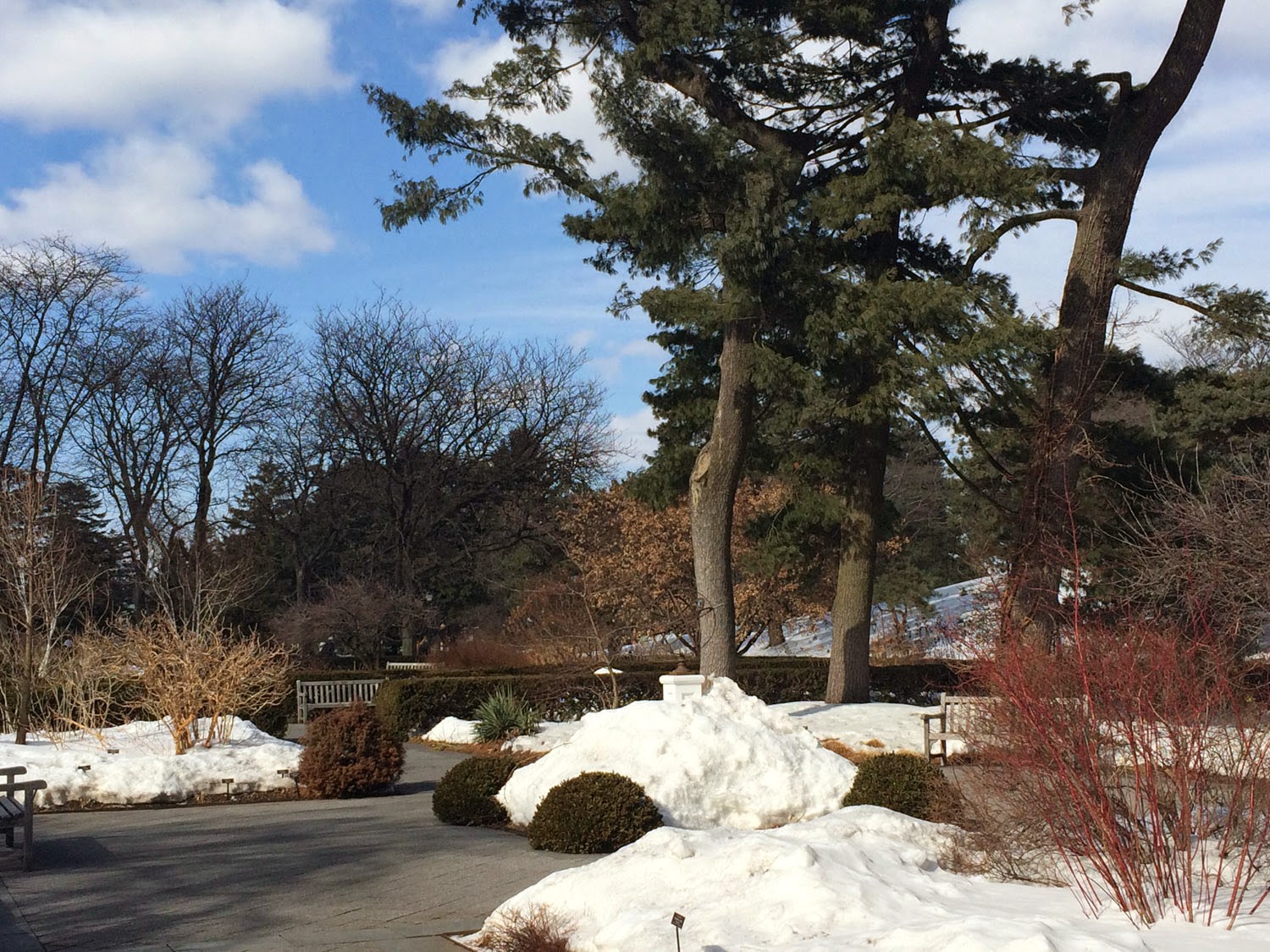 The presentation "Vaux le Vicomte: From Le Nôtre to Today" was going to be given by one of the co-proprietors of the castle, Alexandre de Vogüé, a fifth generation owner and full-time resident of the estate.  I had visited Vaux le Vicomte in 2006 and was very interested to learn more about this historic property from such an authority on the subject.

Situated about 35 miles from Paris, Vaux le Vicomte was the creation of Nicolas Fouquet, the French Minister of Finance early in the reign of Louis XIV.  He assembled a "Dream Team" of designers - the architect Louis Le Vau, the painter Charles Le Brun, and the landscape architect André Le Nôtre - to transform his 1,200 acre property into a masterpiece of interior and exterior design. 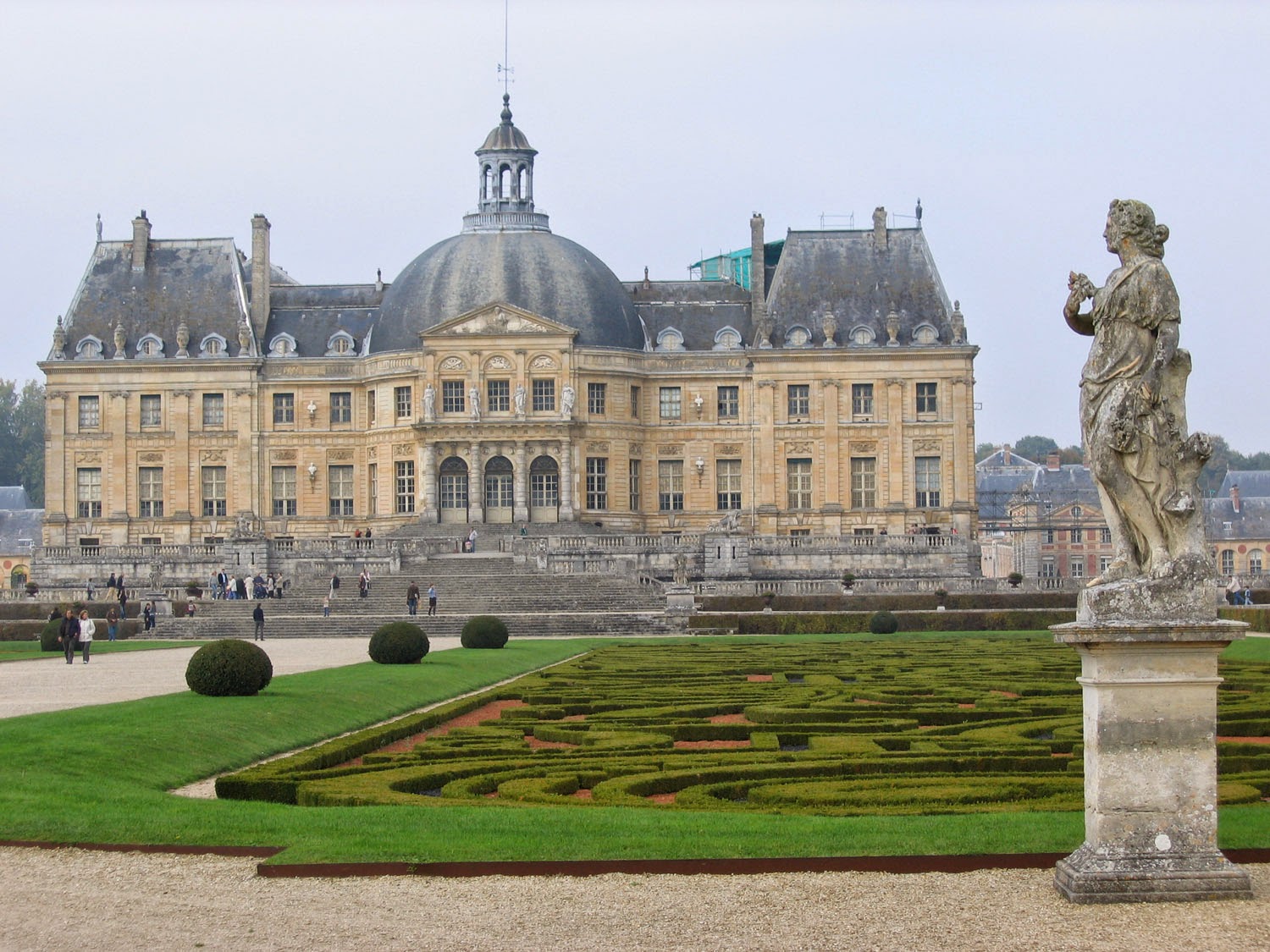 While the castle's structure and decoration are monumental and glorious, the focus of this talk was on the gardens and the revolutionary concepts of technology and design employed by Le Nôtre in creating Fouquet's paradise.  Le Nôtre came from a family of gardeners and he augmented his innate knowledge of horticulture with studies in painting, sculpture, perspective, architecture, geometry and mathematics to become one of the very first landscape architects.  Appointed by Louis XIII as the "Draftsman of Plants and Terraces" and in charge of all the royal gardens of France, Le Nôtre had a considerable influence on the development and recognition of gardening as an art.  Here on the grounds of  Vaux le Vicomte, Le Nôtre had free rein and almost limitless funds to create an outdoor environment that was beyond any one's wildest imagination. 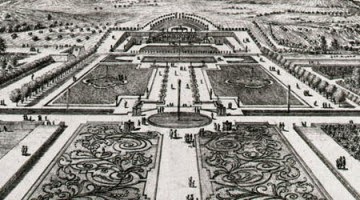 In what was to become de rigeur for French formal garden design, the vista is dominated by a longitudinal axis which is intersected by shorter, transverse axis'.  With boxwood "embroidery" and colorful flowers creating ornamental designs, the parterre sections become living carpets.  17th century engineering that is still in use today, diverted a poorly placed river to subterranean reservoirs that fed a canal and numerous water features with miles of gravity-fed pipes.  Optical illusions played beautiful tricks on the beholders' eyes and strategically planted "fences" of trees create a boundary between man-made beauty and the natural woods.

Le Nôtre went on to fame and fortune and his magnificent landscape designs can still be seen at Versailles, Schönbrunn and Hampton Court.  Fouquet, however, did not end his days in glory.  The victim of a plot to prevent his assuming the position of Prime Minister by his rival, Jean-Baptiste Colbert, Fouquet was arrested shortly after he entertained the King at a sumptuous fête to celebrate the completion of Vaux le Vicomte.  Fouquet spent 20 years in prison where he died in 1680.

With the end of the Fouquet era, the story of Vaux le Vicomte takes a few twists and turns and our lecturer picked up the story again in 1875 when his great-great grandfather, Alfred Sommier, purchased the property in a distress sale.  He devoted the rest of his life to restoring the overgrown gardens and neglected buildings to their original splendor and his heirs continue the enormous task of maintaining and preserving this historic home for the future.  Vaux le Vicomte opened to the public for tours in 1968 and now offers special events including an Easter Egg Hunt, Concert Evenings and Christmas at the Château.  Faced with new challenges including a blight of the boxwood bush and chestnut tree, the family has been forced to come up with new, creative ideas for fund raising not only for routine maintenance but also overcoming these natural environmental issues that threaten the famous gardens. 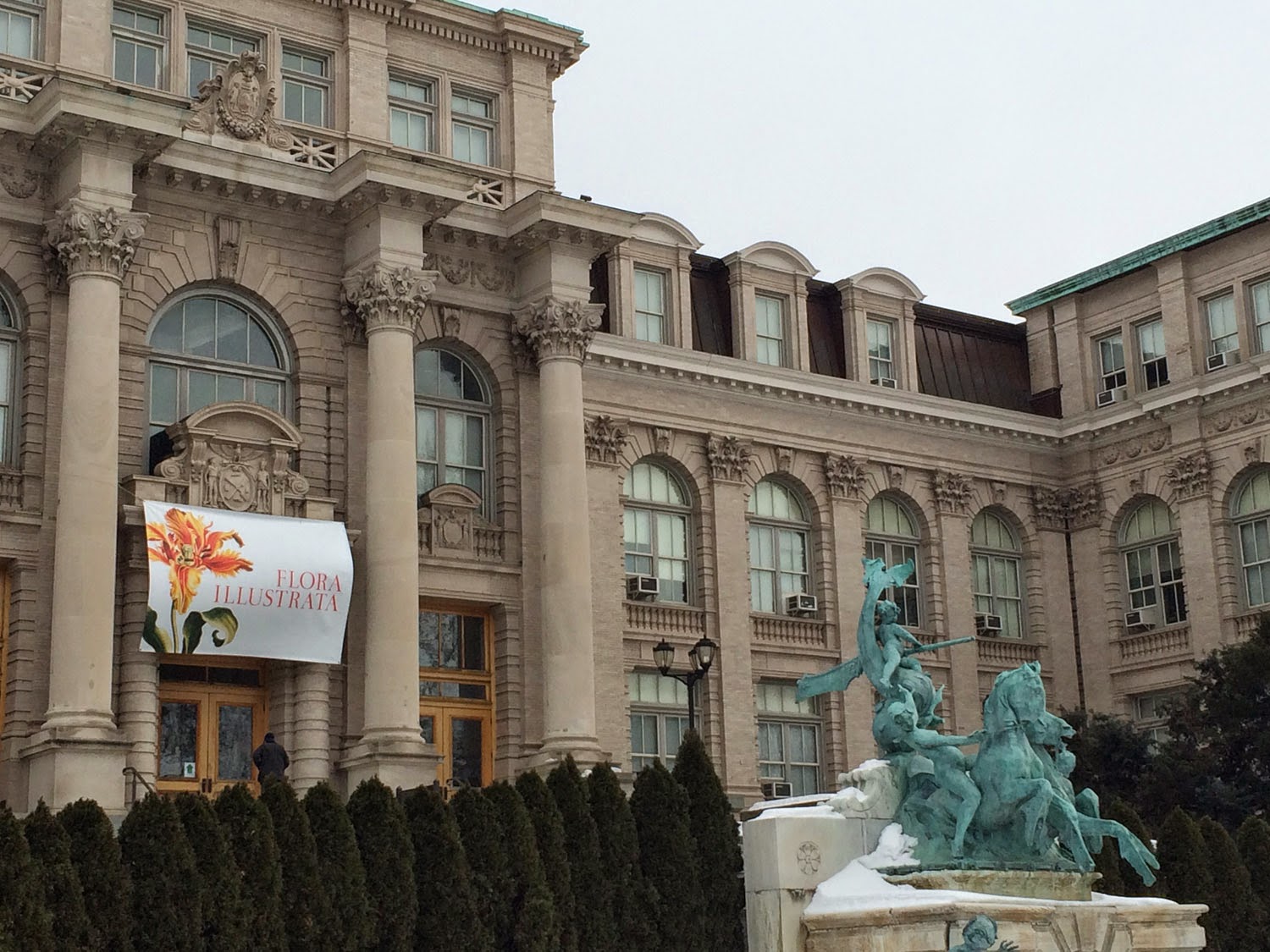 After the talk we were invited to visit a special exhibition in the Library called "Flora Illustrata" that featured a display of rare and beautiful botanical publications from the 12th Century to the present.  We were further treated to a special presentation in the rare book room by Vanessa Bezemer Sellers who discussed some of the Library's oldest and rarest examples of French formal garden design. 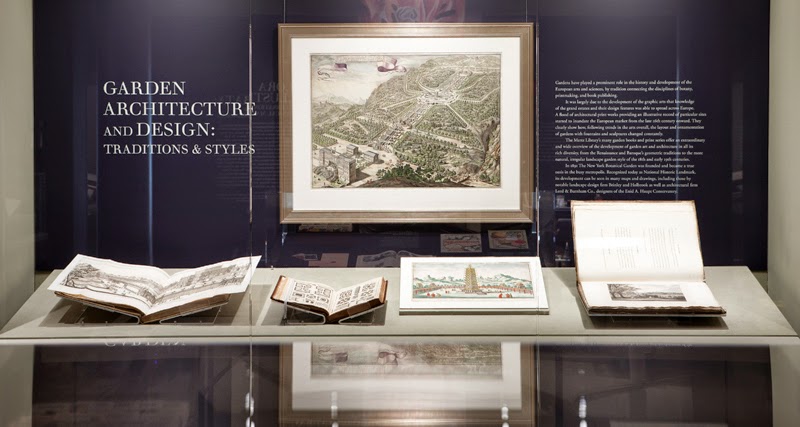 Now it was time for lunch so Betsy and I grabbed a bite at the Pine Tree Café before treating ourselves to a walk-through of the Enid A. Haupt Conservatory.  This giant greenhouse, built in 1902, is probably most famous as the home of the Garden's annual Holiday Train Show but during the regular season it offers informative and beautiful displays of tropical plants.  Right now, the featured exhibition "Wild Medicine in the Tropics" is side by side with other exotic exhibits such as the tropical rain forest and the high desert plantings. 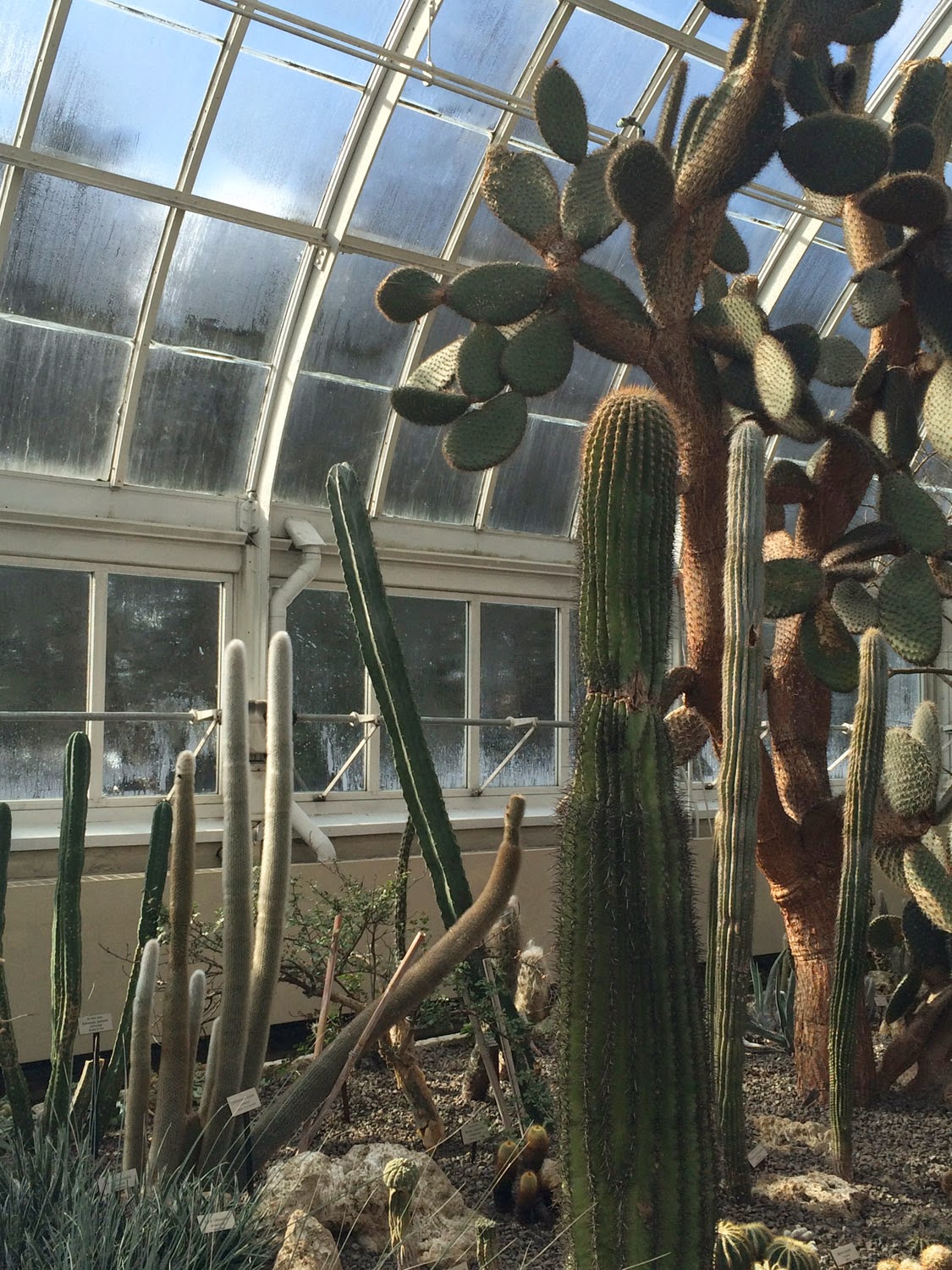 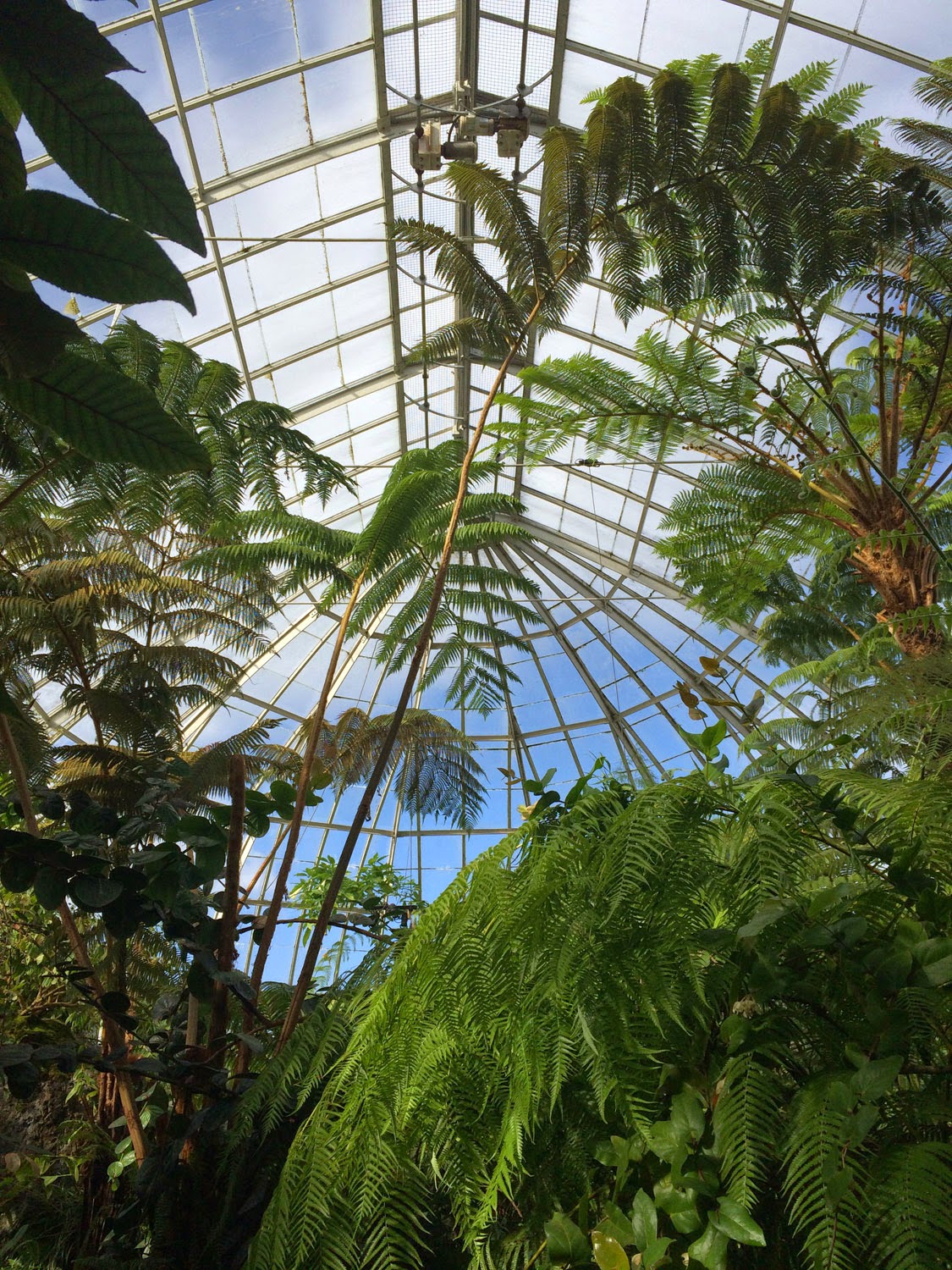 It has been a lovely day here at the New York Botanical Garden, and as we braved the icy wind and blowing snow en route to the train station we both commented on how beautiful and how very peaceful the gardens were in the dead of winter.  Truly a little slice of heaven even with Jack Frost nipping at our noses!
Posted by Georgina Kelman at 8:39 PM No comments:

An Evening at the New York City Ballet

One of the greatest benefits of living on the Upper West Side of Manhattan is its proximity to Lincoln Center.  While I have certainly not become blasé about this choice location, I must confess that I do not avail myself of the cultural treasure trove as often as I should.  But with the winter of 2015 dragging on and no end in sight, it was time to brave the cold and ice and head over to the David H. Koch Theater for an evening of enchantment with the New York City Ballet. Founded in 1948 by the choreographer George Balanchine and impresario Lincoln Kirstein, the New York City Ballet is one of the premier ballet companies in the world known for its uniquely athletic and contemporary style.  This season's repertory offered a program of "New Combinations" featuring three different ballets, one of which was new as of last October and another had its world premiere just last week.

I was really looking forward to my big night out and the magic of a live ballet performance.  I was even happier when I discovered that I would also be treated to a very special installation on the Promenade level entitled "Psychogeographies" by Brooklyn artist Dustin Yellin. 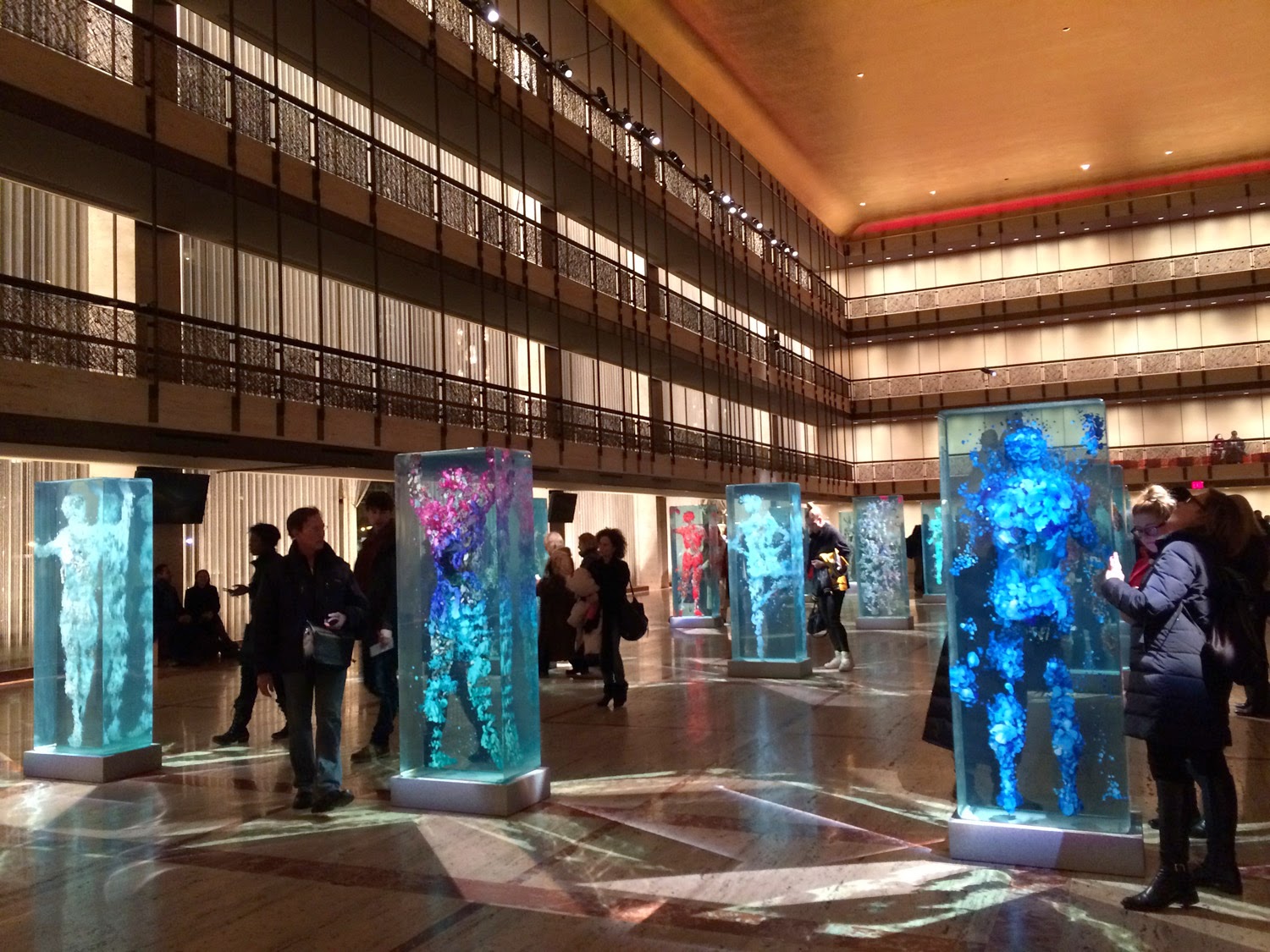 Part of the NYCB's Art Series commissions, Mr. Yellin has created fifteen 3,000-pound sculptures made of giant "slides" of glass with bits and pieces of paper, feathers, leaves and other found objects pressed between the layers to create human forms. 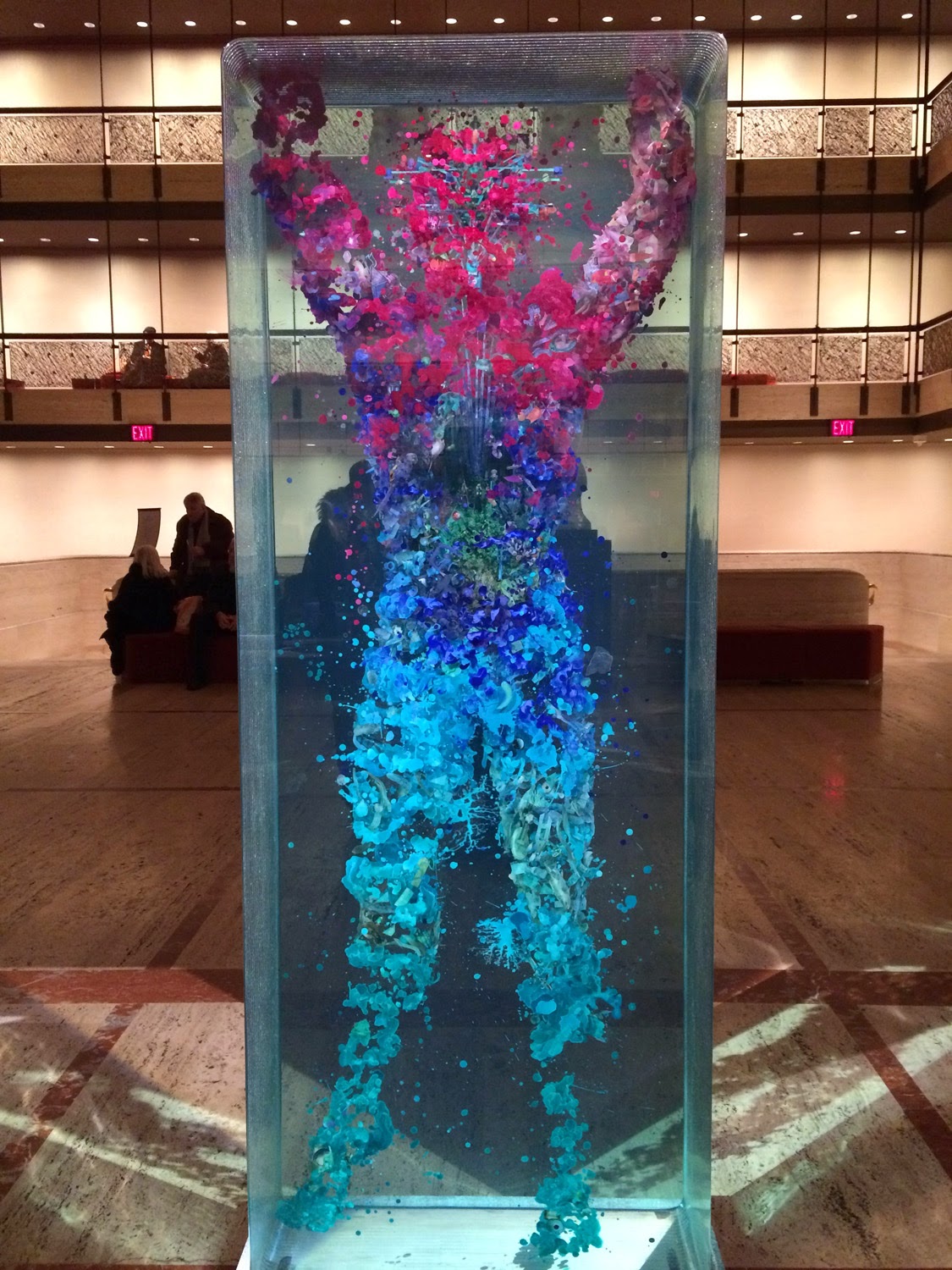 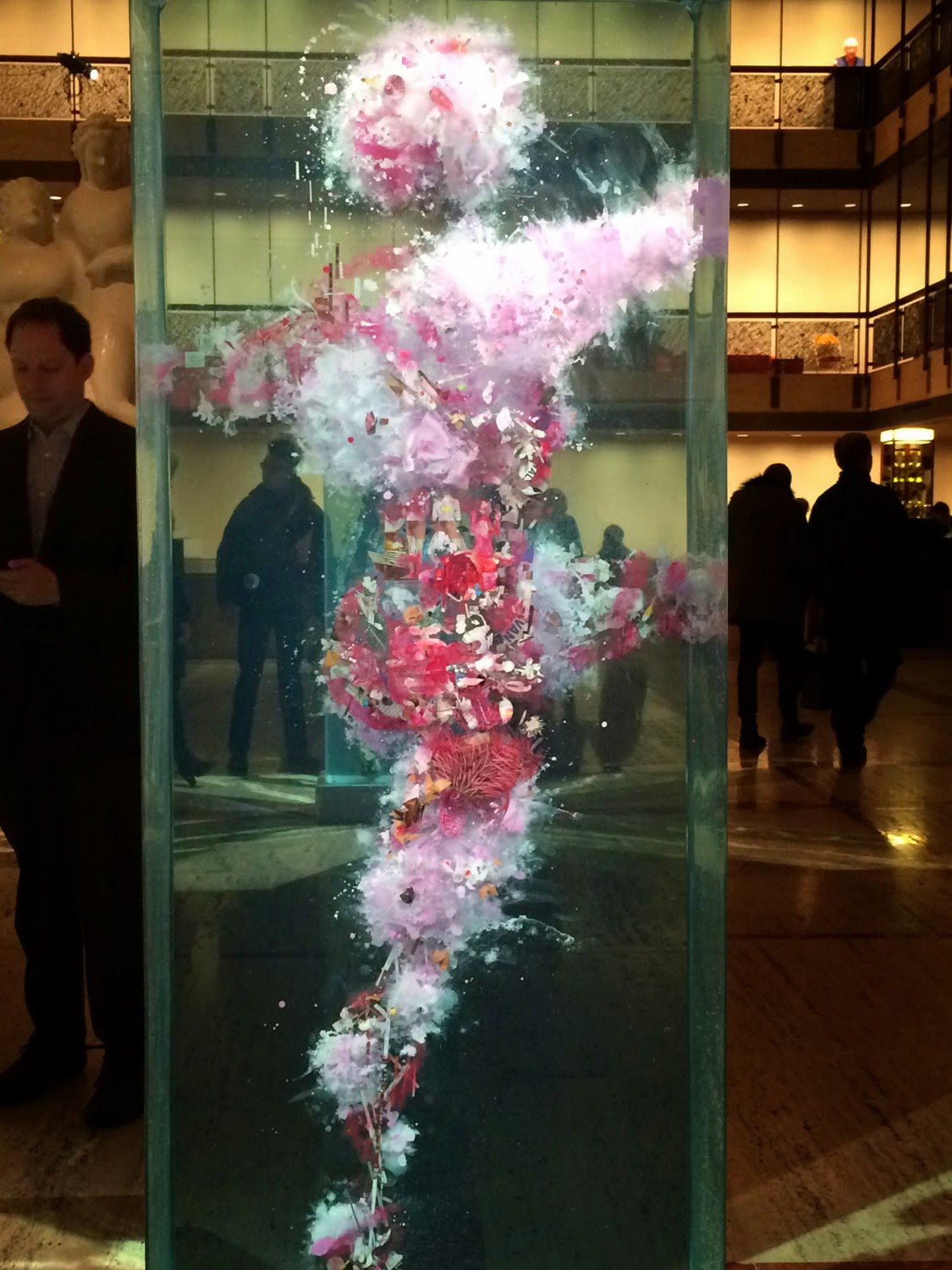 The results are three-dimensional figures that are as beautiful and as ethereal as ballerinas and together the group is like a ballet in itself.  But no sculpture can replace the music and movement of a live performance and as it was just minutes to the curtain I took my seat. 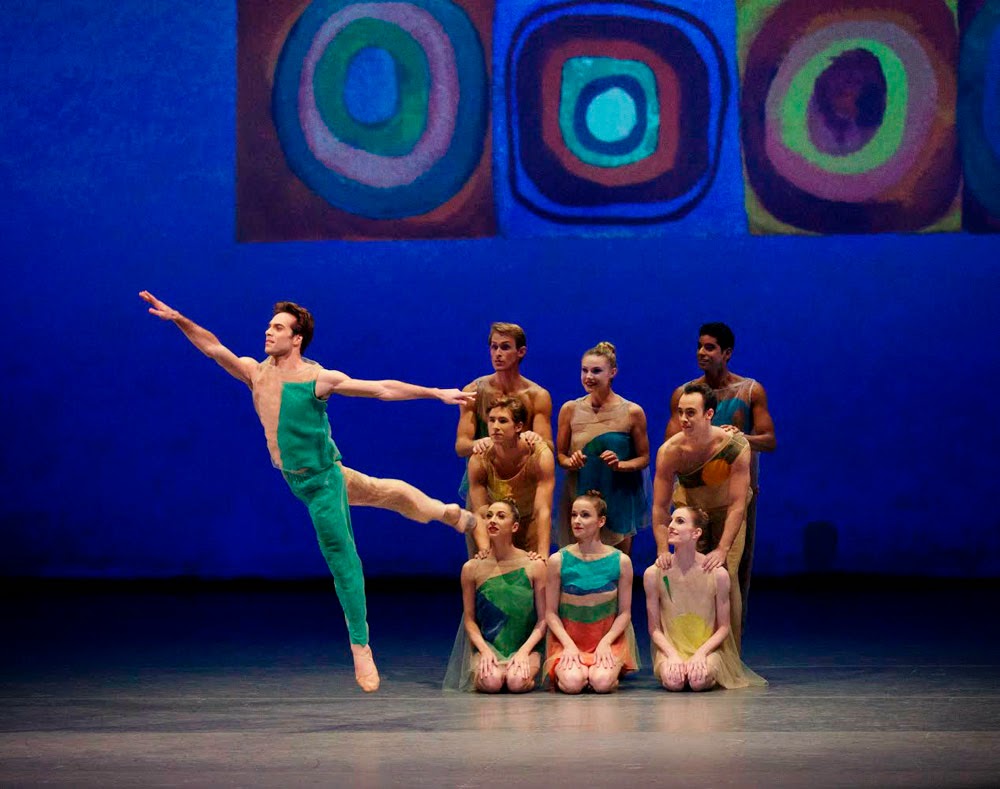 First on the program was "Pictures at an Exhibition", a new production choreographed by Alexei Ratmansky to piano music by fellow Russian, Modest Mussorgsky.  Ten dancers in costumes by Adeline Andre, dance against a projected backdrop based on Wassily Kandinsky's "Color Study Squares with Concentric Circles".  The sixteen movements are mesmerizing and range in emotion from playful to soulful with fast and powerful dancing. 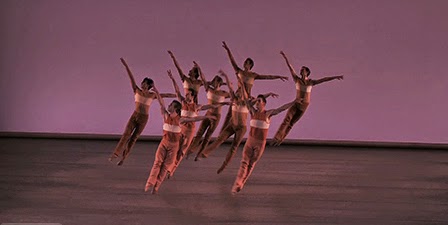 Next up was Justin Peck's brand new interpretation of Aaron Copland's beloved score "Rodeo".  Now presented as "Rõde, õ: Four Dance Episodes" Peck seeks to freshen and build upon Agnes de Mille's original choreography with 21st century vitality.  With only one female dancer among fifteen men, this abbreviated version is meant to evoke imagery like recurring weather patterns and two birds in flight.  I don't know if it is truly an improvement on the Western theme, but it was an inspiring effort. 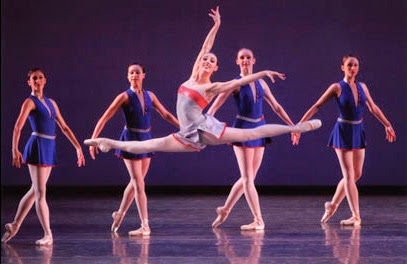 Finally we were treated to Christopher Wheeldon's marvelous "Mercurial Manoeuvres".  When it premiered in April, 2000, it was the last work created by Wheeldon while he was still a soloist with the NYCB and it remains popular to this day.  Based on the score "Concerto in C Minor for Piano" by Dimitri Shostakovich, the music was actually performed by a full string section, a piano and a very fine trumpet player who took a well deserved bow with the dancers at the end!  This witty and absolutely charming piece featured twenty one dancers in nautically-inspired costumes who leaped and twirled to the dramatic music with breathtaking abandon.

It was a transporting evening and unfortunately over before I knew it.  As I left the theater I vowed not to let so much time go by before the next visit to Lincoln Center and the extraordinary New York City Ballet.
Posted by Georgina Kelman at 5:12 PM No comments: