On A Personal Note...

A few days ago, in a circumstance that could be considered cosmic intervention, I had two milestone events occur on the same day.  The first was not a surprise, I celebrated my 50th birthday.  Despite my best attempts to thwart Mother Nature it came in on little cat feet just like Carl Sandburg's "Fog".

The second was not a total surprise either but the timing could not be predicted.  My father died, one day short of his 86th birthday.  He had been battling Parkinson's Disease for a very long time and had been deteriorating rapidly in the last months.

My father and I were not close.  In fact I had not seen him in fourteen years.  He was not present during much of my youth and by the time my parents reached the inevitable conclusion of divorce we were locked in a standoff.  With age comes a sort of acceptance and my teenage anger cooled somewhat, but we were never friends.

Despite our differences in just about everything, I admired my father.  He was born in Berlin, Germany, during the height of the Weimar Republic to a Jewish industrialist and his trophy wife.  My father and his brother lived in relative luxury until the rise of Nazism forced the family to flee with just the clothes on their backs.  My grandfather was interned in Bournemouth, England, and my father suddenly found himself in a schoolroom surrounded by hostile English speaking classmates.  A few years later, with World War II raging, my grandfather died and my father, at the age of 16, assumed the role of breadwinner.

When the conflict was over and transatlantic travel resumed my father left England for Canada.  He settled in Montreal and worked for the Canadian subsidiary of a British manufacturing company.  He eventually made his way to Halifax, Nova Scotia, where he met my mother and remained for the rest of his life.  It was in the home that my father designed and built that my sister and I were raised - a spacious house on the water where we sailed in the summer and skated in the winter.

My father loved machines and could fix anything.  His passion for automobiles caused him to buy a Jaguar XK140 sports car as the family car.  Not exactly a practical choice but one that turned heads when my mother sped by with a German shepherd dog and a baby on board!  I don't ever remember a handyman coming to our house.  When my father came home from his business travels we were all mustered into action to build, maintain or repair whatever had broken during the week.  This was his version of "family time".

His lack of formal education haunted him until he committed himself to earning a degree in mechanical engineering while continuing to work full time.  It took a lot of determination and many hours shut away in his study preparing for the full complement of exams, but he attained his goal in his early fifties.  He wore the iron ring of Canadian engineers with well-earned pride.

I do not mourn for what our relationship might have been, it was what it was.  I write this as a tribute to a man whose story bears telling - someone who overcame some very substantial obstacles to attain his dreams and an example of what determination can achieve.  Rest in Peace. 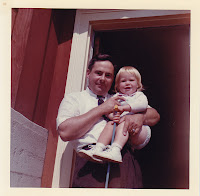 "Deco Japan" at the Japan Society

From 1920 until the 1940's, the Art Deco movement thrived on both sides of the Atlantic.  From magnificent New York skyscrapers to the elegance of the SS Normandie the clean, sophisticated lines of this post World War I aesthetic spoke to a generation tired of tradition and the old ways.

What many people do not realize is that Art Deco was more than just a European and American phenomenon.  With the popularity of movies and advances in travel it was not long before the new modernism spread all the way to the island nation of Japan.  Much as Japonism took France by storm in the 1880's, the influence of this contemporary style was speedy and widespread, and with its own distinct flavor.

A special exhibition now on at the Japan Society is a revelation in just how far reaching the Art Deco spirit was.  "Deco Japan:  Shaping Art and Culture, 1920-1945" explores how the mania for modernity permeated Japanese culture in everything from matchbox labels to lacquer ware, kimonos to scrolls.  This is the first time that the Japanese version of Art Deco has been presented in the United States and the 200 plus objects from kitsch to fine art are fascinating in how similar and yet different the two versions are.

The show is arranged in six sections tracing the emergence and evolution of Art Deco in Japanese art and culture.   The categories of "Cultural Appropriations", "Abstract Forms and Natural Motifs", "Over and Under the Sea" and "Nationalism" show how deco design was hugely influenced by many factors including world events (for example the discovery of King Tut's tomb and the Olympic Games), flora and fauna, the increased ease and popularity of international travel and political circumstances (the Japan China war).  The Japanese as a people were experiencing a time of social and technological change, an era that pitted Western liberalism with Asian traditionalism, and the brand new and hugely popular Art Deco "look" provided the ideal way to update classic imagery in a thoroughly 20th Century way.

The most amusing sections for me were "The World of the Moga" and "The Cultural Home".  The  "moga" was an exotic new creature - a Japanese "it" girl right down to the bobbed hair, revealing clothing, cigarette and martini glass.  Quite a striking contrast to the time honored geisha and one that raised a few eyebrows!  The "Modern Girl" was portrayed in all manner of media from silk screens to porcelain figurines as she embodied the new vitality of the age.  Class conscious young wives may not have smoked or drank alcohol so publicly, but they did aspire to a "bunka jutaku" or "culture house", a home that combined the elegance of Japanese tatami mats with the luxury of a Western parlour.  Here the clean lines of Deco design provided the perfect melding of East and West in furniture, objects and accessories.

Japan Society is located near the United Nations in a beautiful landmark building designed by the architect Junzo Yoshimura on land donated to the Society by John D. Rockefeller III.   A visit to this oasis of calm is a pleasure at any time but please keep in mind that "Deco Japan" closes on June 10.
Posted by Georgina Kelman at 5:18 PM 1 comment: 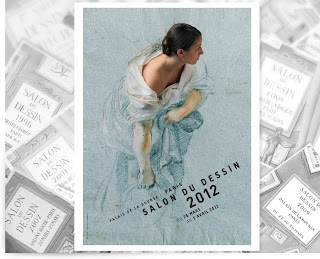 It was my great pleasure to be able to visit the 21st annual Salon du Dessin during my last week in Paris.  Considered the premier showcase in the world for Old Master Drawings, it is also a treasure trove of exquisite examples of works on paper from Medieval illuminated manuscripts to 20th Century graphite sketches.  Not only was I able to attend the festive opening soirée I could also return again to peruse the offerings with more time and smaller crowds.

Once again the Salon was held in the beautiful and historic Palais de la Bourse - the former stock exchange now functioning as a very upscale meeting and event space.  In recent years the fair has been the centerpiece for the Semaine du Dessin - a whole week of special shows and functions all focused on drawing and involving museums and cultural spaces throughout the city.

I would have a very hard time choosing my one favorite piece from the show, but there were several that would be in the running.  A pencil, ink and wash drawing of "Le Corbeau et la mort (The Crow and Death)" done by Gustave Doré in 1883 as an illustration for Edgar Allen Poe's "The Raven" and featured on the stand of Didier Aaron & Cie, Paris, was equally intriguing and creepy.  The venerable British gallery, Agnew's, offered a charming 18th Century drawing in sanguine of young woman sleeping in a chair "Jeune femme endormie" by Louis-Roland Trinquesse.  And a watercolor sketch of an armchair on the stand of Talabardon & Gauthier, Paris, was actually a preparatory study for Edgar Degas "La Famille Bellelli" which now hangs at the Musée d'Orsay.

Galerie Terrades, Paris, had a large and lovely charcoal drawing by Leon Lhermitte entitled "Femme se déshabillant à la lumière d'un chandelle" done in 1888 and exquisitely capturing the very special glow and shadow of the candlelight in the room.  Stephen Ongpin, London (who always has something special on his stand) this year featured a portrait of a young woman drawn in sanguine with touches of blue crayon by Belgian Symbolist Fernand Khnopff (see left).   I know I have gone overboard with favorites but I must mention one more - a pair of extraordinary trompe l'oeuil pen and ink and aquarelle drawings on the stand of Artur Ramon, Barcelona.  Entitled "Ces drolles font bonne chère" (see below) and "L'Aventurier" they were executed in the second half of the 18th Century by Italian Giuseppe Crespi and are marvelous in their detail and charm. 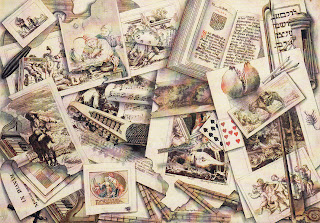 This wraps up my reportage from Paris as it is time to return to New York and to new adventures.  It has been a wonderful visit in every way from the gorgeous spring weather to the plethora of beautiful art to enjoy.  I can't wait for the next time!
Posted by Georgina Kelman at 5:56 PM No comments: