Last week was time for the annual July jaunt to the Commonwealth of Massachusetts! Beside visiting friends and neighbors, swimming in the delightful waters off Cape Cod Bay, and eating enough lobster rolls to satisfy my Nova Scotian heritage, it was a good opportunity to visit some of the terrific exhibitions now on across the state.

Beginning in the charming town of Dennis and the Cape Cod Museum of Art where, until August 5th, they are presenting "Gail Levin / Photographs: Hopper's Places & Cape Cod Connections". In 1976, Ms. Levin, a scholar on the paintings of Edward Hopper and a conceptual artist in her own right, set out to photograph the sites that Hopper had painted while he lived on the Outer Cape. This is a small but fascinating exhibition that gives great insight into Hopper's world and brings his paintings to life in an entirely new way.

After viewing Levin's documentary photographs, a trip to the Museum of Fine Arts, Boston special exhibition "Edward Hopper :: The Ordinary Made Extraordinary" was definitely in order! This comprehensive retrospective of Hopper's work comprises 50 oil paintings, 30 watercolors and 12 prints, including some of his most famous works such as "Lighthouse Hill", 1927, "Chop Suey", 1929, "Early Sunday Morning", 1930, and the iconic "Nighthawks", 1942. Though his paintings can be dark and melancholy, they are nevertheless compelling and Hopper's standing as a Major American artist of the 20th Century is without question.

Moving across the street to the delightfully idiosyncratic Isabella Stewart Gardner Museum was like stepping back in time. Isabella Stewart Gardner was a patroness of the arts, and in her lifetime amassed a significant collection of paintings, prints, sculpture, books and rare objects. Her dream was to present these works to the public in an appropriate surrounding, and on New Year's Day 1903 she opened Fenway Court, now re-named in her honor. This institution is unique in the museum world as she personally supervised the design of the building and gardens and the installation of the collection within. Her will stipulated that no changes were to be made to the interior design and so it has remained frozen in time to this day. While this preserves a certain charm and authenticity, the galleries could benefit from some improvements to the lighting, not to mention the security system so antiquated that in 1990 robbers made off with 13 masterpieces (the empty frames are still hanging on the walls). Nevertheless, a visit to the Gardner is a wonderful experience and there are many magnificent treasures to enjoy. 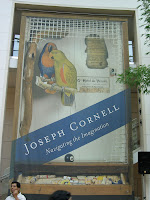 The next stop in this Massachusetts museum odyssey was a visit to Salem! Probably most famous for the witch trials in the 17th Century, Salem is also home to the Peabody Essex Museum, a surprisingly diverse and multi-cultural institution in the bosom of Yankee history. Featured this summer is the marvelous "Joseph Cornell: Navigating the Imagination", an exhibition co-curated with the Smithsonian in Washington D.C. Joseph Cornell was an American original (see my blog "The Extraordinary World of Joseph Cornell", April 30, 2007) and this important retrospective seeks to establish his huge influence in the worlds of modern art, film, poetry and design. On view are 180 examples of his magical boxes, games, objects and collages that will amaze and delight both Cornell aficionados and those just discovering his world.

While at the Peabody Essex, I took time to tour the "Yin Yu Tang" House. Built in the rural village of Huang Cun in Southeast China 200 years ago, this was the ancestral home of the Huang family. Eight generations lived within the walls of this pre-cursor to the modern apartment building. In the 1980's, through an agreement between the museum and the government of Huizhou, the house was dismantled, transported and completely re-constructed in Salem, Massachusetts. The results are fascinating. Visitors take a self-guided tour and are transported back to another time and a totally different culture and leave with a new understanding of life in China before and after the Revolution.

From the Atlantic coast to the Berkshire Mountains, it is time to visit the Williams College Museum of Art in beautiful Williamstown. A very special treat awaits in its summer exhibition "Making it New :: The Art and Style of Sara and Gerald Murphy". In many ways, the Murphys epitomized the Jazz Age. Born to wealthy families in Cincinnati and New York, their marriage in 1915 was a match made in heaven. After the birth of their 3 children, Sara and Gerald emigrated to Paris in 1921. Here they forged a new "moderne" lifestyle that became the model for F. Scott Fitzgerald's novel "Tender is the Night". The exhibition seeks to explore the relationships this famous couple had with other icons of the era - Pablo Picasso, Fernand Léger, Man Ray, Ernest Hemingway and Cole Porter to name a few. It is also an unprecedented opportunity to see 7 of the 14 oil paintings done by Gerald Murphy himself. By presenting personal objects such as letters, family photos and artifacts with works of art by their friends and contemporaries, the visitor is transported back to the glory days when the Murphys were considered "masters of the art of living". Sadly, the party came to an abrupt end with the stock market crash of 1929 and the untimely deaths of their two beloved sons Patrick and Boath. The legend of the Murphys continues to entrance however, and this fine exhibition is a testament to their influence on what we fondly look back on as the "Golden Age of Style".

The last halt in this whistle stop tour is also in Williamstown at the wonderful Sterling and Francine Clark Art Institute. Founded in 1955 by Singer sewing machine heir Sterling Clark and his wife to house their renowned collection of French Impressionist and American paintings, The Clark is also home to a world class center for research and conservation. Beside their magnificent permanent collection that includes superb examples by such luminaries as Degas, Renoir (over 30 paintings), Pissarro, Homer, Sargent and Whistler, the museum now features a special exhibition of pastels and drawings by Claude Monet. "The Unknown Monet" is the first show to explore Monet's works on paper, from his very early caricatures to later waterlily sketchbooks. Also on view is a selection of watercolors, drawings and prints by J.M.W. Turner and John Constable that has recently been bequeathed to The Clark from The Manton Collection.

Now that's a lot of art! Time to head back home and look forward to the next visit to Massachusetts and all it has to offer!
Posted by Georgina Kelman at 12:01 PM No comments:

A Visit to The Explorers Club

New York City is filled with clubs and societies as wide ranging as one can imagine. From the white glove "University Club" on Fifth Avenue to the "Union Club" on Park, from the "Century" to the "Cosmopolitan", there is something for every academic, political and ethnic affiliation.

One club stands out from the rest. The Explorers Club was founded in 1904 and is located in a Tudor style townhouse on East 70th Street. I recently had the good fortune to be invited on a tour of this landmark building and its extraordinary collection.

The Explorers Club is dedicated to "the advancement of field research, scientific exploration and the ideal that it is vital to preserve the instinct to explore". Potential members must establish their interest in and contributions to some aspect of exploration, and prove an active and continuing pursuit of furthering scientific knowledge of the world. The roster of members, both living and deceased, is impressive. No sissies in this lot - member accomplishments include the first visits to the North Pole (Robert Peary, 1909) and the South (Roald Amundsen, 1911), the first ascent to the peak of Mount Everest (Sir Edmund Hillary, 1953), the first descent to the Marianas Trench (Jacques Piccard, 1960) and the first man to walk on the moon (Neil Armstrong, 1969)!

The clubhouse is filled with souvenirs of these expeditions and is a taxidermist's delight. In addition to the plethora of tusks and animal skin rugs is a stuffed polar bear and a penguin! There is also a fine collection of paintings of Africa by William Leigh, a map collection, and the actual sled used by Admiral Peary in his Arctic exploration.

Members of this organization are united in their love of science and adventure. No cushy ocean liner travel for them! The ultimate goal for these brave souls is to "Carry the Flag" - to embark on an club approved expedition with one of the coveted Explorers Club Flags and earn the distinction of going where no one has gone before.

It was indeed a privilege to be invited to visit this venerable institution and I thank Judith Bowman for the tour. Happy Travels!

Posted by Georgina Kelman at 3:38 PM No comments:

The gale that tossed the Queen Mary 2 on the high seas wore itself out by Thursday afternoon and the rest of the voyage was completed in relative calm. In fact Sunday was so sunny and nice that we braved the outdoor pool and enjoyed the sensation of being IN the water while ON the water. We were even treated to a sighting of a school of dolphins frolicking alongside the ship! 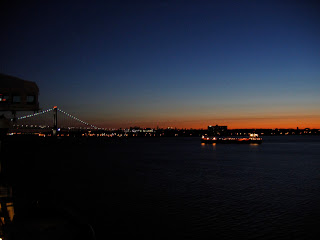 The Verrazano Narrows Bridge at Sunrise
with the QM2 Bridge upper left
Unfortunately, all good things must end and after a wonderful transatlantic crossing we would be arriving in New York Harbor early Monday morning. Captain Rynd announced that we would meet the Pilot boat at Ambrose Light at 3 AM and be guided under the Verrazano Bridge, past the Statue of Liberty and arrive at our berth at the Brooklyn Passenger Pier at 6.

The first light awakened us at 4:30 and one glance out the window was enough to convince me that throwing on my clothes and going out in the cold morning air was not such an insane idea. I was certainly not alone. Hundreds of passengers were on deck to witness the extraordinary spectacle of sunrise over New York. Despite a very stiff breeze, we stood in the bow and along the sides looking up under the Bridge, at the full moon, at the magnificent Lady with the Torch and then Gotham itself. New York City never looked finer, and it made me proud to call it home. 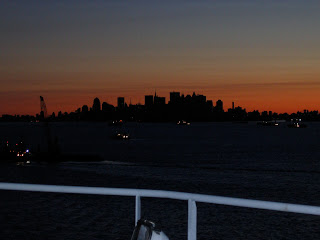 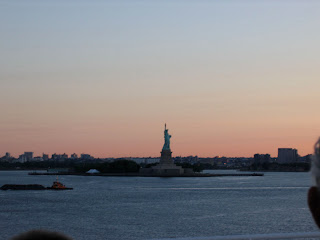 Lady Liberty
Posted by Georgina Kelman at 5:28 PM No comments: