James Tissot at The Brooklyn Museum 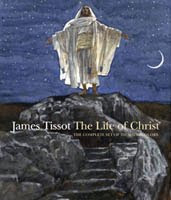 If the rapid approach of Christmas is wearing you out instead of cheering you up - I have a very good antidote to your distress! Hop on the Number 2 train, ride out to Eastern Parkway and visit "James Tissot: The Life of Christ" now on view at the Brooklyn Museum.

James Tissot has long been one of my very favorite artists. His depictions of beautiful ladies in Victorian Paris and London are splendidly detailed accounts of both the perils and pleasures of life at that time. His paintings hang in the great museums of the world and his etchings are highly sought after. But his life was almost as dramatic as the images he portrayed.

Tissot achieved success early in his career as Parisian high society's portrait painter of choice. His re-location to England after the War of 1870 proved providential as he became the darling of London's elite and in 1876 met the love of his life, the ex-wife of a sea captain, Mrs. Kathleen Newton. Her "unfortunate" circumstances forced the affair to be kept under wraps, but Tissot immortalized her lovely face in many of his best known works. Mrs. Newton died of tuberculosis in 1882 and a broken-hearted Tissot quit London in search of redemption.

Now James Tissot, like many people both then and today, was raised Catholic but had let his religion fall by the wayside as he flitted about with the rich and famous. After Mrs. Newton's death, during a visit to the Church of Saint Sulpice, he experienced a vision of Jesus tending to people in a ruined building that struck him like a thunderbolt and literally changed his life. He gave up painting fashionable subjects and embarked on a project to illustrate the New Testament beginning with an excursion to the Holy Land.

The culmination of this 10-year long mission was the French and English publications of "The Life of Christ" illustrated with 270 color reproductions. It was an immediate success and the 350 original watercolors that Tissot created on the subject were presented to huge acclaim at the Paris Salon of 1894 and later in a trans-Atlantic traveling exhibition including London, New York, Boston, Philadelphia and Chicago. In 1900, at the urging of John Singer Sargent, the brand new Brooklyn Institute of Arts and Sciences (now the Brooklyn Museum) decided to purchase the complete series of watercolors at the astonishing price of $60,000. They remained on display until 1930 when they were packed up and put in storage only to have a few examples surface from time to time.

Until January 17, 2010, visitors have the rare opportunity to view 125 of these beautiful watercolors that depict every stage of the life of Jesus Christ from the Annunciation, His childhood, His ministry, The Passion and finally The Resurrection. Familiar Christian scenes of the Manger in Bethlehem, the Marriage at Cana, the Miracle of the Loaves and Fishes, the Prodigal Son, the Good Samaritan, Christ on the Cross, and Doubting Thomas are depicted in infinite detail using an opaque watercolor method. Often Orientalist in style, Tissot has recreated the scenes with a mania for accuracy in costume, architecture and landscape that was unheard of at the time and gives the works an almost photographic quality.

So during the holiday season when it is often difficult to reconcile all the things on your "To Do" list with the original and true reason for Christmas, I offer you a moment to enjoy this devout artist's exquisite interpretation of the birth of Our Savior and how He changed the world. May the joy of Christmas be with you and your families now and throughout the year! 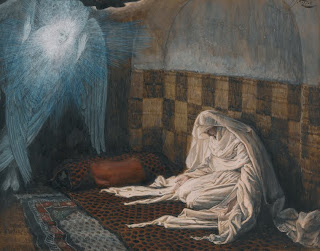 A Visit to The Norton Museum of Art, West Palm Beach

Greetings from sunny Florida where I have been enjoying the sun and the beach for the past few days! Of course, officially I'm here for Art Basel Miami Beach, now in its 7th year and while still a lot of fun, not quite the go-go event of a few years ago. So instead of speculating on who sold what for how much, I'll tell you about my visit to Palm Beach and The Norton Museum of Art.

Founded in 1941 by ACME Steel industrialist Ralph Norton and his wife Elizabeth, the Norton Gallery and School of Art showcased their extensive collection of fine European, American and Chinese art. Now expanded to a 122,500 square foot facility, the museum's holdings counts 7,000 pieces and has expanded to include photography, Contemporary Art and a ceiling by noted glass sculptor Dale Chihuly.

The ground floor is dedicated to special exhibitions and their superb collection of 20th Century painting and sculpture. On view this month is "George Segal: Street Scenes", a review of this American sculptor's exploration of the urban environment, "William Kentridge: Five Themes", a multi-media look at issues of imperialism , colonialism and apartheid

though the eyes of this South African artist, and, "New York, New York: The 20th Century" which speaks for itself and was my personal favorite! Also on this floor is the Norton's permanent collection of Modern and Contemporary Art highlighted, at least for me, by the magnificent Brancusi bronze sculpture "Mademoiselle Pogany" but also showing first class works by Josef Albers, Georges Braque, Stuart Davis, Lucio Fontana, Edward Hopper, Jacob Lawrence, Pablo Picasso and Andy Warhol.

A walk upstairs revealed a choice group of European and Asian porcelain that occupied the entire floor. The third level is devoted to European paintings before 1900 and offers some very fine examples of art from the Italian Renaissance, Impressionism and British Portraiture.

The Norton Museum of Art is a little gem and I would certainly recommend a visit if you happen to be in town. Now that I've reached my art quota for the day it's time for a stroll on Palm Beach's magnificent Worth Avenue where the window shopping is museum quality too!
Posted by Georgina Kelman at 6:23 PM No comments: