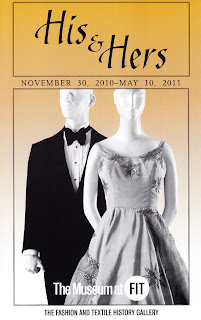 I was walking along Seventh Avenue the other day when I passed the Fashion Institute of Technology and realized that I had not visited the Museum at FIT in quite a while. So having some time to spare before I had to be at my appointment, I took a peek at the current exhibition "His & Hers".

The aim of the show is to explore the similarities and differences in men's and women's fashions from the eighteenth century to the present. Not surprisingly the early styles are more gender specific in design than the "unisex" modes of the late twentieth century but there were certain areas where feminine and masculine overlapped even in the 1700s.

This evolution of gender neutrality in fashion is interesting to observe through examples of styles from the museum's own collection. Beginning with the premise that historical fancy dress for both men and women was often lavishly embroidered and decorated in a manner that would be considered "feminine" today and continuing through the "masculinization" of women's clothing with the popularity of divided skirts for sporting costumes, we can clearly trace the development of such avant garde statements as Yves Saint Laurent's iconic "Smoking" tuxedo for women in the 1980's.

The show offers many examples of men's and women's clothing from opulent antique gowns and court suits to "mod" jumpsuits from the groovy sixties. On view are evening clothes, sportswear, wedding attire, nightclothes, career suits and casual clothes all intended to enhance the idea that masculine and feminine, if not interchangeable, have more in common than one thinks.

"His & Hers" may not fully make the case for equality in dress, but it does give one something to think about - but hurry, the show closes on the 10th of May!
Posted by Georgina Kelman at 4:40 PM No comments:

So wondered the bewildered visitors to Picasso's studio at 242 Boulevard Raspail in Paris when confronted with his latest creation.

"It's nothing, it's el guitare" responded the artist nonchalantly. The time was late 1912, and Pablo Picasso had made a guitar. Not a wooden instrument with frets and steel strings, but a cardboard version that had been cut and folded and and threaded with twine and looked a little like a guitar if you used your imagination but evidently posed more questions than it answered.

El guitare became Picasso's obsession for the next two years as he created several variations on the cardboard construction and finally, in 1914, a sheet metal form with metal wires as strings. What these seemingly childish pursuits were, in fact, was a breakthrough period in Picasso's work that led to the development of Cubism and other 20th Century art movements. The cardboard guitar, in all its simplicity, paved the way for de-construction of planes and shapes and inspired a whole new way of looking at things. 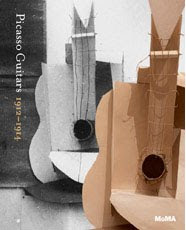 These two cutting edge guitars were eventually donated by the artist to New York's Museum of Modern Art where they are currently on display along with 70 closely connected collages, drawings, paintings and photographs that they inspired. "Picasso: Guitars 1912-1914" is a special exhibition devoted to this very particular, watershed period in Pablo Picasso's career. Very specific, not overwhelming and extremely interesting, this small but excellent show clearly demonstrates the profound influence the guitar form had on Picasso, his art, and eventually on his fellow artists.

Following the initial fabrication of the cardboard guitar, Picasso set forth on an exploration of unconventional techniques and materials. With the guitar as a theme he created collages and paintings using "Papery Procedures" incorporating newspaper, wallpaper and sheet music onto the canvas and "Powdery Procedures" where the pigment was mixed with grit to give it texture, or painted to look like wood grain or marble as a trompe l'œuil. The results were stunning and the guitar became the central subject of many works, often in combination with wine bottles and glasses, cups of coffee, with the head of a girl or a man and with "F holes" added to become a violin.

Interestingly, Picasso did not publicly exhibit his pre-World War I musical instrument works until the late 1960s, but he did have them photographed at the time, often in groups as a documentation of what he was working on. These photographs were published shortly after in avant garde journals such as "Les Soirées de Paris" and give an amazing glimpse into the world of this visionary artist.

Pablo Picasso was a larger than life artist and personality and his legend continues to grow. This exhibition explores just a tiny chapter in his career, but an important one, and puts a lot of his later work into better perspective. "Picasso: Guitars" is on view at MoMA until June 6th.
Posted by Georgina Kelman at 4:18 PM No comments:

"Color Moves: Art and Fashion by Sonia Delaunay" at the Cooper Hewitt 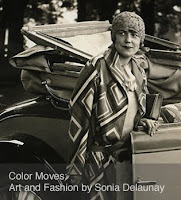 Last month I visited the Cooper-Hewitt National Design Museum and reported back on the sparkling exhibition "Set In Style: The Jewelry of Van Cleef and Arpels". Today I returned to visit the second floor galleries and an exhibition that opened while I was in Paris that is dedicated to the work of one of my very favorite 20th Century artists, Sonia Delaunay.

Sarah Stern was born in the Ukraine in 1885. After being adopted at the age of five by her wealthy uncle, Henri Terk, young Sarah moved to St Petersburg where she enjoyed all the privileges of an affluent, well connected Jewish household. Her exposure to the fine arts was augmented with travels through the capitals of Europe and an excellent education including private lessons in drawing and painting. Her natural talents as an artist were quickly recognized and in 1905 she moved to Paris and began formal studies at the Academie de la Palette and visiting galleries and salons to really soak in the scene. 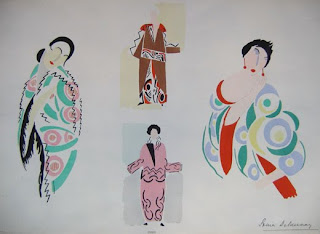 Here's where her life gets interesting. A marriage to the German collector and dealer Wilhelm Uhde allowed her to remain in Paris rather than return to her family in Russia and furthered her education in the "business" of art. However, it was in Uhde's gallery that she met and fell madly in love with Robert Delaunay and her husband, realizing that he didn't stand a chance, graciously stepped aside and divorced her so that she and Robert could be married. 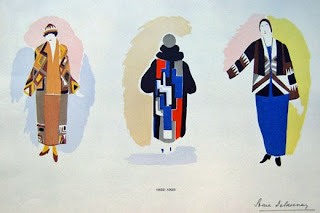 Robert and Sonia were true soul mates. Together they developed their avant garde color theories of Orphism (a brighter version of Cubism) and Simultaneity (color as a major element in the creation of form and movement) and though they worked separately on most projects, each influenced the other greatly. 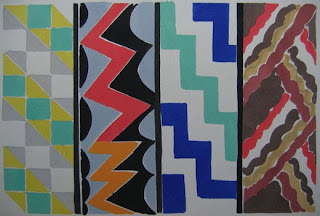 The practical reality was that Sonia's talents as a designer would provide the financial security for Robert to paint his canvas' and she was able to support her family through commissions for ballet and opera costumes, textile design and custom clothing. "Casa Sonia" in Spain and "L'Atelier Simultané" in Paris were frequented by such patrons as Gloria Swanson and Nancy Cunard who were attracted to her bold geometric compositions in strong colors. In the 1930s, Sonia became a major designer for the Dutch department store Metz & Co to whom she provided over 200 styles. She also collaborated with the poets Blaise Cendrars and Tristan Tzara to illustrate several artist books which are prized by collectors to this day. 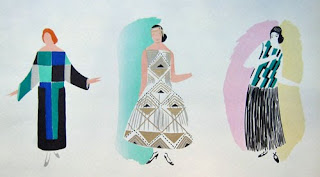 The span from 1918 until the mid 1930's was a watershed time in Sonia Delaunay's career and it is this period that the Cooper Hewitt focus' on in this retrospective. Featuring literally hundreds of textile samples and drawings, and augmented with photographs, actual dresses and accessories, the exhibition "Color Moves: Art and Fashion" clearly demonstrates the artist's avant garde genius in the field of design. I mean, imagine a geometric knit bathing suit on the Riviera in 1922 and you're talking style! 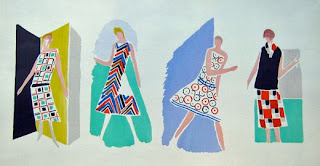 Sadly, the Great Depression spelled an end to her fashionable boutiques and worse still her husband Robert died of cancer in 1941. She survived World War II hiding in the French countryside where she also managed to protect the rolled up canvas' of her husband and his dear friend Hans Arp. After the war she returned to Paris and resumed her career as an artist although never with the same verve as before. In the years after her death in 1979, Sonia Delaunay has finally emerged from the shadow of her husband and has earned the esteem of both the art and design communities. "Color Moves: Art and Fashion by Sonia Delaunay" is a major tribute to this outstanding colorist and should not be missed!

P.S. All of the color illustrations are pochoir prints from Sonia Delaunay's 1925 album "Ses Peintures, Ses Objets, Ses Tissus Simultanés, Ses Modes" and can be found on my website: GeorginaKelman.com
Posted by Georgina Kelman at 4:22 PM No comments: