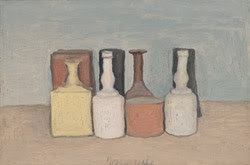 "Natura Morta", 1956
"What interests me the most is expressing what's in nature, in the visible world, that is." Giorgio Morandi, in a 1957 interview for the "Voice of America".

The Italian artist Giorgio Morandi (1890-1964) was never a revolutionary painter, nor did he ever achieve cult status, but for those who know, his complex, contemplative works are considered some of the finest examples of 20th Century Modern art and forerunners to the Minimalist movement.

Morandi was born and died in Bologna, Italy, and except for occasional trips to Venice, Florence, Rome, or his country house in Grizzana, was content to stay there and work on his still lifes and landscapes. He was a tall man, and by all accounts a very thoughtful one who maintained a low public profile despite his increasing prominence as an intellectual and influential artist. 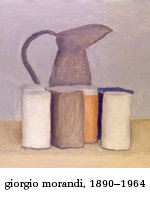 This fall, New Yorkers have several opportunities to discover the work of this master for themselves. Through December 14th, the Metropolitan Museum of Art presents "Giorgio Morandi, 1890-1964". This is the first retrospective of Morandi's career ever presented in the United States and should be a rewarding discovery for museum goers on this side of the Atlantic.

Morandi's early works are an exploration of the Metaphysical as influenced by Cézanne, and reflect a desire to "return to order" after the horrors of World War I. This period lasted until 1922 when he shifted to the style for which he is best known, the still life arrangements of bottles and other banal objects through which he examined the subtleties of volume, form, tone and balance. To a casual observer this may sound pretty dull, but a small effort on the part of the viewer will reveal surprising layers and intricacies.

To clarify the concept, the Met curators have presented "suites" of still lifes, comparable to musical forms of variations on a theme, where a set number of simple objects are arranged and studied in a particular light, then slightly rearranged and reexamined in a different light. At first glance the paintings are the same, but a second look will uncover a world of differences. "In the end, it is just a white bottle" Morandi is quoted as saying in 1962, but in fact the bottle has been reduced to a statement of volume and shape and an example of pure formal abstraction.

Two paintings on display at the Met are neither still lifes nor landscapes. They are 2 stunning self portraits, exceedingly rare and powerful works done in 1924 and 1925. Typical of Morandi's flat, warm style, they are intense and revealing in 2 entirely different ways. 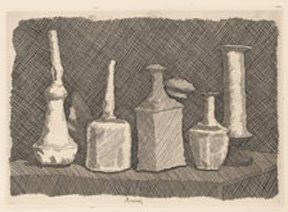 Morandi was also known as a master print maker, in fact he was a professor of etching at the Accademia di Belle Arti for over 20 years. In a small but excellent show now on at Pace Prints, 32 East 57th Street, gallery goers can see a superb selection of some of Morandi's finest graphic works in both still lifes and landscapes.

If you still have a hunger for Morandi, visit the Italian Cultural Institute on Park Avenue at 69th Street. In conjunction with the retrospective at the Metropolitan, the Institute is presenting "Giorgio Morandi: Watercolors and Drawings 1920-1963" a small but very worthwhile exhibition of works on paper by their esteemed native son.

Now that you've become more familiar with Giorgio Morandi, let me share one more little known fact with you - the director Federico Fellini honored his fellow Italian by featuring Morandi's paintings in his iconic film"La dolce vita". What finer tribute to this "artist's artist"!
Posted by Georgina Kelman at 12:37 PM