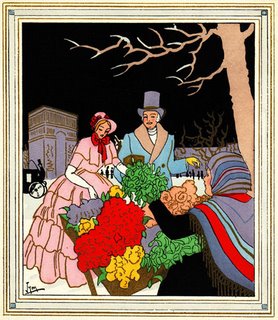 As 2006 draws to a close, we celebrate the wonders of the holidays and the promise of a new beginning. When I started to write this blog in January, I never dreamed that it would reach so many people or that the weekly quest for interesting photos and material would become such an important and satisfying part of my life. I would like to thank my loyal readers for your support and wish all of you a very Happy and Healthy 2007! See you in the New Year!
Posted by Georgina Kelman at 4:27 PM No comments:

Stars and Treasures at the NYPL 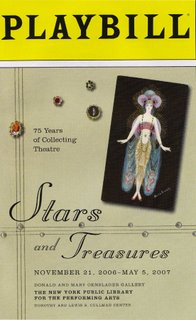 The New York Public Library for the Performing Arts is celebrating 75 years of collecting theatre with a special exhibition now on view at the Lincoln Center Plaza branch. "Stars and Treasures" is a well edited selection of theatre artifacts culled from the Billy Rose Theatre Collection holdings of over 9 million pieces.

With show tunes playing in the background, the visitor explores the history and highlights of European and American theatre through vintage posters, photographs, programs, letters and other memorabilia. Beginning with Buffalo Bill and "Theatre of Spectacle" and continuing through to modern "Musical Theatre in America" this exhibition captures the magic of the footlights and its impact on our popular culture. Of particular interest is a touching letter from Tennesee Williams, 2 elegant gold cigarette cases from Cole Porter's collection, original costume designs by Joseph Urban and the trunk/stage set for Joel Grey's one-man show.

The last section of the galleries displays some personal talismans from contemporary actors. While some of these pieces were unique and charming, most seemed to me to be irrelevant. In any case, come on along and enjoy the lullaby of Broadway at this free exhibition that runs until May 5, 2007.
Posted by Georgina Kelman at 4:01 PM No comments:

Sometimes the best memories come from encounters that happen entirely by chance, making one wonder if there really is such a thing as coincidence or if it's not all part of the "master plan". 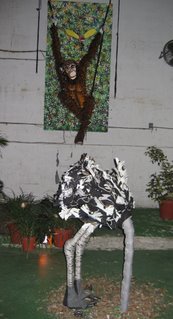 Take yesterday for example. We were walking back to our car after visiting several art fairs here in Miami, when we passed by an open garage door. For some reason we stuck our heads in and just saw a big space with construction materials so we turned and left, embarrassed to have been caught trespassing. A young man followed us out and asked if he could help us. Then he invited us in to have a look saying "if you don't come in, you've wasted an opportunity". We hesitated, then followed him in and discovered a wonderland of tropical scenes and animals, all created using Puma shoes! We had inadvertently stumbled upon a fabulous installation entitled "Human Nature" - an artistic collaboration between PUMA footwear and the Colombian artist Federico Uribe. Mr. Uribe uses daily objects, such as colored pencils or in this case athletic shoes and reinterprets them in unexpected ways. He has already achieved quite a level of success and his work is represented by galleries in Europe, North and South America. It was, in fact, Mr. Uribe himself who invited us to come in and look and not taking him up on his very friendly offer would truly have been a missed opportunity!

It has been very windy and stormy here in South Florida. Not exactly beach weather but with only a few days, what's a body to do? So every morning, sun or clouds, we take a walk on the beach and then jump into the surf. The wind was howling this morning and the clouds ominous, but we took off anyway and headed South towards Miami. There, in the distance, was a parachute, or was it? Getting closer we saw it was actually a "para surfer", a modified surfboard with a small parachute attached. The surfer himself was a real pro and treated us to a show of swoops and flips and aerial jumps while shooting across the waves on his board. A private performance of water acrobatics that was a thrill to watch!

So the point is, in this season of miracles, whether you are a believer or not, there is magic to be found in the most unlikely places. Just open up your mind and say "yes"!
Posted by Georgina Kelman at 5:39 PM No comments: 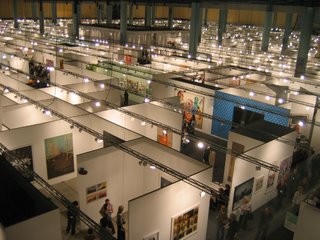 A bird's eye view of the opening of the 2006 Art Basel::Miami Beach Fair

The Miami Herald announced on Wednesday that a record 450 private jets had touched down at the Miami Airport in the last 24 hours bringing dealers and collectors alike to the 5th American edition of the Basel Art Fair. When the doors opened to the VIP visitors at noon, the waiting throngs had been advised to wear running shoes so they could literally "sprint" to their favorite dealer's booth to have first crack at the multi million dollar merchandise. Clearly, what started off as a very risky venture in 2002 - postponed one year in the aftermath of 9/11 - has become THE art fair to see and be seen.

Art Basel::Miami Beach has become almost a caricature of itself. The main fair, held in the Miami Convention Center, features 200 exhibitors culled from over 1000 applicants. Official satellites of this fair are "Art Nova", "Art Video Lounge" and "Art Positions" which comprises 21 converted shipping containers each housing a contemporary art gallery, located at the beach. Success breeds imitation, and for those dealers who could not get into the main fair, an industry of smaller ancillary fairs has sprung up. To date, 12 extra art fairs have been organized in hotels and tents in the Miami Beach and Wynwood Art District. "Pulse", "Scope", "Aqua", "Flow" and "NADA" are some of the other fairs vying for the collectors' attention, and wallets. Add to this an explosion of museum shows, installations, tours of collections, not to mention the parties, and you've got a HUGE event.

The energy and excitement in Miami is contageous. While the art is generally a little "way-out" for a traditionalist like me, it is really something to see. Not to mention the people watching! But to tell you the truth, the best part about coming to Miami is the chance to go swimming in the ocean in December!
Posted by Georgina Kelman at 10:03 PM No comments:

An Afternoon at the Metropolitan Museum of Art

I'm embarrassed to admit that I haven't paid a visit to the Metropolitan Museum of Art in a few months. It's easy to procrastinate when it's close by and there is still time to catch the exhibitions. Then, all of a sudden, that special show is almost over and "Oh my Gosh!" it's time to do something about it!

So yesterday was sunny and beautiful here in New York and the perfect opportunity to rectify my recent lack of museum culture! I started with "Cézanne to Picasso: Ambroise Vollard, Patron of the Avant-Garde" that runs until January 7th. Ambroise Vollard (1866-1939) was an art dealer extrordinaire. At the tender age of 25, Vollard exploded onto the Paris art scene, realized that the days of the "Salons" were numbered and proceeded to revolutionize the business of art. Vollard was the first to recognize the talents of such 19th and 20th Century masters as Gauguin, Bonnard, Vuillard, Cézanne, Rouault, and most famously, Picasso. It was Vollard who gave Picasso his first show in Paris, in 1901, when the young artist had just arrived and couldn't yet speak French. This show assembles 100 paintings that were owned, exhibited or commissioned by Vollard. It also pays homage to his vision as a publisher and his major contribution to the art world in the form of livres d'artistes. 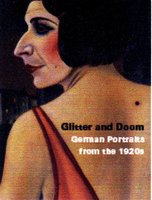 Next stop, Post World War I Berlin and the short-lived, but highly influential Weimar Republic. "Glitter and Doom: German Portraits from the 1920's" features the work of 10 artists active in the Neue Sachlichkeit (New Objectivity) movement, and particularly an offshoot known as Verism. This show is not pretty to look at. The portraits, by such notables as Max Beckmann, Otto Dix and George Grosz, are harsh looks at members of society from the bourgeois industrialist to the aging prostitute. Graphic, cynical, hyper-realistic and sometimes cruel, they express the disappointment felt by so many in the aftermath of the Great War. 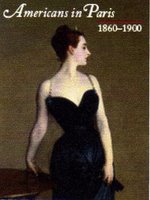 An anecdote to this ominousness can be found in the galleries of "Americans in Paris: 1860-1900". This is the New York venue of the exhibition I saw at the Museum of Fine Arts in Boston and reviewed in my blog on July 21st. I loved it then, and I love it now. I know it's fluffy, but the paintings are gorgeous and they represent an era of elegance and beauty that we only dream of today. Great American masters such as James Whistler, John Singer Sargent, Mary Cassatt, Childe Hassam and Winslow Homer, all studied in Paris and we are the richer for their experience. Their wonderful portraits, views of Paris, interior scenes and plein air painting take the visitor on a trip to 19th Century France without a passport.

Finally, it's still early in the season but no trip to the Met during the holidays is complete without a visit to their magnificent Christmas Tree and Neapolitan Baroque Crèche. This holiday tradition continues to enchant visitors who gaze in awe at the enormous tree adorned with beautiful terra cotta angels and surrounded by 18th Century figures depicting the nativity. All this in a magical medieval setting with recorded choir music playing in the background. It is a moving experience and reminds us to take the time to enjoy the beauties of life and visit a museum!
Posted by Georgina Kelman at 4:11 PM 1 comment: