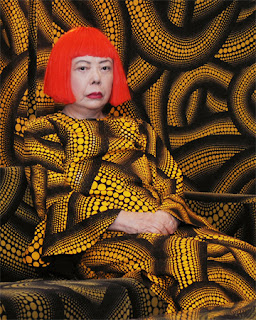 If you think you've been seeing a lot of polka dots around New York lately, you're right!  From the Louis Vuitton boutique on Fifth Avenue at 57th Street up to The Whitney Museum of American Art on Madison at 75th, the perky polka dots of Japanese artist Yayoi Kusama are everywhere!

Born in Matsumoto Japan in 1929, Ms. Kusama came to the United States in 1957 to explore her art in an environment more receptive to women artists.  And receptive it was.  She soon found herself in New York City at the heart of the avant-garde art world and on the cutting edge of such new movements as Pop, Minimalism, Conceptualism and performance art.  Indeed, in the 1960s and 70s Ms. Kusama was a fixture on the New York art scene with her works exhibited alongside such luminaries as Andy Warhol, Donald Judd and Claes Oldenburg.  She worked in a variety of media including painting, sculpture, works on paper, film, "happenings" and immersive installations or "environments".  Her use of dense patterns and serial repetition, particularly incorporating polka dots, became her signature and a theme she continues to this day.

Ms. Kusama left New York to return to Japan in 1973 where she was embraced as major contemporary artist.  Interestingly, in 1977 she voluntarily checked herself into a psychiatric institution where she continues to reside with daily outings to her studio in Tokyo and rare voyages to openings of museum exhibitions.

It is remarkable too that now, in her 83rd year, she is not only the subject of two major museum retrospectives - at the Tate Modern in London and The Whitney Museum of American Art in New York - she is also the star of luxury goods retailer Louis Vuitton's 2012 Spring season.  A fashion-forward deity in her heyday when the "Kusama Fashion Company" was in full swing, Yayoi Kusama's polka dots are once again in style and gracing high end handbags and accessories of all sorts.

Unfortunately, while I really like polka dots, a Louis Vuitton purse is a little beyond my budget, but a visit to the Whitney is definitely doable.  Here, the fourth floor exhibition space is entirely devoted to her works from her very early works on paper, to video clips and photos of her performance pieces to her strangely phallic "Accumulation" sculptures that change ordinary objects such as shoes and sofas into sprouting biological beings.

The highlight of this exhibition has to be infinity mirror room installation entitled "Fireflies on the Water".  Created in 2002 it is part of The Whitney's permanent collection but is rarely on display.  Now, in conjunction with her solo show, visitors are permitted to experience this remarkable "immersive installation".  Timed tickets allow a one minute entry into a 12 foot square mirrored room with one hundred and fifty tiny colored lights suspended over a reflecting pool.  Believe me, it is worth the wait for one minute of total silence, all alone in a marvelous magical environment with no beginning and no end. 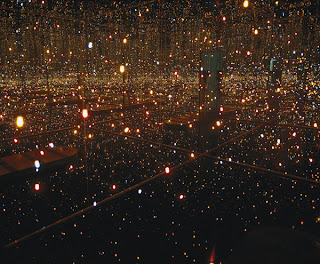 I thoroughly enjoyed my visit to The Whitney and this peek into the polka dot world of one of the 1960s major art figures.  Judging by line to enter museum, I was not the only one drawn to explore the fabulous world of Yayoi Kusama!  The exhibition remains on view until September 30.
Posted by Georgina Kelman at 6:37 PM No comments:

A Visit to MOBIA

Since the Museum of Biblical Art opened its doors to the public in May of 2005 its exhibition space has hosted a number of fascinating shows with the art of the Bible as their connective theme.  Subjects ranging from "Icons or Portraits" to "Reel Religion" have been explored with the idea that an understanding of the history, imagery and symbolism of the Bible is integral to an understanding of Western culture, irrespective of one's religious beliefs.

I always check out what's going on at MOBIA as I ride past on the bus and was intrigued by the current exhibitions so this afternoon I took a little detour to Broadway at 61st Street and popped in. 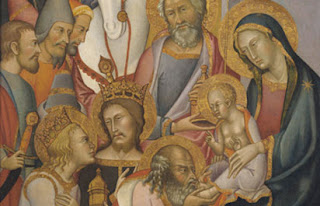 The front gallery featured "The Adoration of the Magi by Bartolo di Fredi:  A Masterpiece Reconstructed".  For the first time in 200 years, the Sienese artist Bartolo di Fredi's marvelous altarpiece is on display as a whole alongside a few well chosen works by the master and his contemporaries.

The arrival of the three kings, or Magi, bearing gifts of gold, frankincense and myrrh to the newborn Christ Child, is one of the most often depicted scenes of the New Testament.  In Bartolo di Fredi's example, the first monumental altarpiece dedicated to this theme, the center panel portrays the Holy Family, visited by the three kings, attended to by three servants who stand before three horses.  In the background we follow the progress of the Magi as they journey to Jerusalem, meet with King Herod, and continue on their way past several Sienese landmarks to their ultimate destination.  The left-hand lower panel, or predella, is entitled "Seven Saints in Adoration" and features Saint Agnes with six yet-to-be identified saints and the right-hand predella, "Adoration of the Crucifix", depicts Christ upon the cross with Mary the Virgin Mother, St John the Evangelist and Mary Magdalene, among others, in attendance.

The altarpiece, completed circa 1385, was probably installed in Siena's Church of San Domenico but was removed from this location sometime before 1816 and and the individual panels sold off.  It is remarkable to see three major portions of the work re-assembled and presented with very informative wall labels describing the biblical references, the artistic methodology and the history of the piece itself. 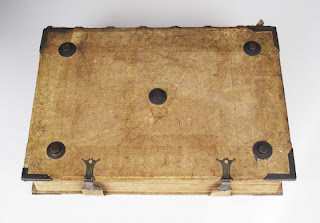 In a smaller area at the back of the gallery is a second exhibition entitled "Printers, Monks & Craftsmen: Bookmaking in the Age of Gutenberg".  Culled from the Rare Bible Collection of the Library of the American Bible Society (of which MOBIA is now steward) are fourteen bibles printed between 1455 and 1525.

The innovation of the printing press opened a whole new world for dissemination of information and the Bible was the most popular literature to be mass-produced.  Previously written and embellished completely by hand, Bibles were only available to royalty, clergy and the very wealthy.  The new printed Bibles were stylistically based on the illuminated manuscript and as familiarity with the new process grew, so did creativity in both the printed body of the book and the binding that contained it. With a focus on Gothic bindings, this survey of very early printed bibles explores regional differences in their construction and form and presents some very impressive examples of these ecclesiastical treasures.

These concurrent shows run until September 9.  MOBIA is open to the public from Tuesday to Sunday and admission is free.
Posted by Georgina Kelman at 5:17 PM No comments:

"Schiaparelli and Prada" at The Costume Institute 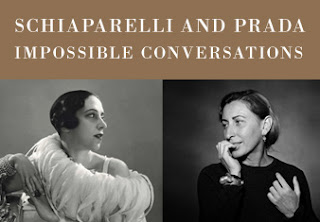 This year the much anticipated Spring Exhibition of the Metropolitan Museum's Costume Institute continues its tradition of innovation and surprise in both theme and presentation.  After 2011's blockbuster hit "Alexander McQueen: Savage Beauty" this is a more subdued but far more cerebral presentation that combines historical with present day fashion concepts and concerns.

Inspired by the Mexican artist Miguel Covarrubias' 1930s series for Vanity Fair magazine entitled "Impossible Interviews", the Costume Institute has imagined a discussion between two great woman designers of the 20th and 21st Centuries - Elsa Schiaparelli and Miuccia Prada.  Although both of these women were born in Italy to aristocratic families and both were hugely influential on women's fashions in their time, their approaches could not have been more different.  Through large format video projections of simulated conversations between the two women (Judy Davis plays Schiaparelli), and a clever installation of their designs juxtaposed in vitrines, visitors gain a real appreciation for each one's unique contribution to the world of fashion but also how much they ultimately have in common.

Elsa Schiaparelli (1890-1973) launched herself into the world of couture fashion in Paris in the 1920s.  Although she never had the name recognition of her arch rival Coco Chanel, "Schiap", as she was called by her friends, created designs that were decades ahead of their time.  She kept company with many of the avant garde artists of the age and was hugely influenced by the work of the Dadaists and Surrealists.  In fact, it was Salvador Dali who inspired and collaborated with her on the iconic "shoe" hat and "tears" dress - both on display in this exhibition.  The House of Schiaparelli struggled during and after World War II and shut its doors in 1954.

After studying to be a mime, Miuccia Prada (b. 1949) took over her family's luxury goods business in 1978 and turned it into one of the foremost fashion houses in the world today.  As well as its eponymous brand, the design house now owns Miu Miu, Fendi, Helmut Lang, Jil Sander and other high-end fashion labels.  Ms Prada continues to reign over this empire and her fashion philosophy of modern, understated designs executed from premium materials is the mantra.

So what exactly are the qualities that bind and separate these two fashion moguls?  The exhibition explores these questions through seven themed galleries displaying 140 garments and accessories culled from The Costume Institute's own collection, the Prada Archive and various international public and private collections.

For me, the first and last galleries were the most convincing illustrations of what each designer contributed to the world of fashion and how each stood out individually.  "Waist Up/Waist Down" was a comment on the women and the times they lived in.  Where Schiaparelli's customers were "café society" ladies who were generally seen seated from the waist up, Prada's followers are contemporary women who tend to be more active and overtly sexual with the focus from the waist down.  This display fuses Schiaparelli's ornately embellished tops, in the forms of jackets, necklaces and hats, with Prada's signature bottoms - pants, skirts and fantastical footwear.

Passing through "Ugly Chic", "Hard Chic", "Naïf Chic", "The Classical Body", "The Exotic Body" we come to the final gallery, "The Surreal Body".  Here, individual mannequins are posed in lucite boxes in a sort of designer "face off".  Occasionally enhanced with black and white photos with surreal effects like blinking eyes, the outfits clearly demonstrated the influence of the Surrealists on Schiaparelli and Schiaparelli's influence on Prada.

In the end, of course, each woman is her own distinct being with a unique look.  But we realize that no one works in a vacuum and even the most original designers owe a nod to their predecessors.  "Sciaparelli and Prada:  Impossible Conversations" is on view until August 19th. 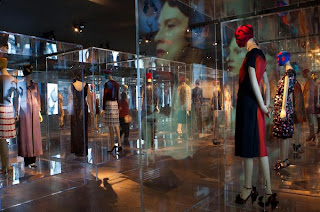 Posted by Georgina Kelman at 4:38 PM No comments: