We have become almost inured to fashion spectacles by the likes of Lady Gaga or Kim Kardashian who seek to shock with more and more outrageous outfits on the red carpet or just on the town.  But their desire to create a sensation or gain notoriety through dress (or lack of it) is nothing new.  In fact, one could say that the trend began over a century ago, in Paris, with the original fashion queen, the Countess Greffulhe.

Born Marie-Joséphine Anatole Louise Élizabeth de Riquet de Caraman-Chimay to an aristocratic French family in 1860, she married the very wealthy Viscount (later Count) Henri Greffulhe at the age of 18.  This advantageous union provided the Countess Greffulhe the fortune she desired to indulge her many passions, and indulge she did.  As well as a generous supporter of the arts and sciences - she was a patron of causes from Diaghilev's Ballets Russes to Marie Curie's research into radioactivity - the Countess was also a major client of some of the greatest couturiers of the age. 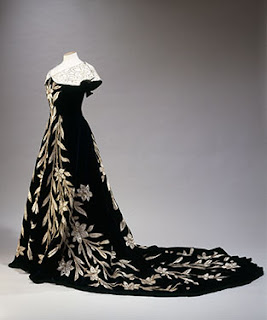 A stunning beauty with a slim build, dark eyes and auburn hair, the Countess had a very clear idea of how she wished to present herself and dictated those fashion terms to her dress designers.  Even such masters as Worth and Paul Poiret were forced to alter their sartorial visions to accommodate her wishes.  According to the press at the time "Her fashions, whether invented for her or by her must resemble no one else's."   She preferred to look "bizarre" rather than "banal". 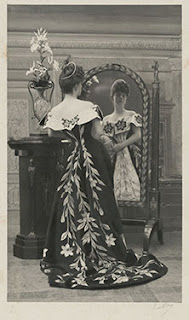 Photograph by Nadar of the Countess Greffulhe posing
in front of a mirror, wearing the "Lily Dress"

While this may have rubbed some gentry the wrong way, it had the opposite effect on the up and coming writer Marcel Proust.  Though not a personal acquaintance, he became infatuated with the Countess Greffulhe and modeled Oriane, the Duchess de Guermantes in his magnum opus "A la recherche du temps perdu (In Search of Lost Time)" after her.  Oriane, like the Countess, used fashion as a tool to project social standing, as a language to express her individuality and as a form of artistic expression. 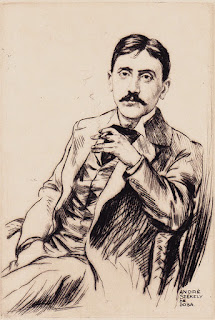 In collaboration with the Palais Galliera, the Fashion Museum of the City of Paris and the repository for the Countess' wardrobe, Dr. Valerie Steele and her team at New York's Museum at FIT are now presenting twenty eight magnificent examples of the Countess' gowns and wraps, plus an assortment of accessories including stockings, hats and shoes.  Dating from around 1885 to the late 1930s, the collection comprises fashions from day dresses to ball gowns, from the House of Worth to Jeanne Lanvin, each a masterpiece of couture in both style and workmanship. 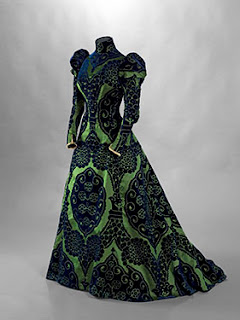 "Tea Gown", House of Worth, circa 1897
Blue cut velvet on green satin ground

Two items in particular exemplified the Countess' identity as a very self aware fashion icon.  The first is an evening cape that originated as a gift from Tsar Nicolas II on a visit to Paris in 1896.  He presented the Countess with a heavily embellished court robe from Bukhara.  She promptly took it to Charles Worth and had it re-styled and transformed into an evening cape that is almost ecclesiastical in feeling.  The second is the gown she wore to her daughter's wedding.  Conservative in style with long sleeves, a train and a high neckline, the dress, nevertheless, is a show stopper.  Taffeta lamé with gold and silver embroidery, sequins, pearls and a fur trim, the "Byzantine Gown" was created in 1904 by a young Paul Poiret when he was still at the House of Worth.  The story goes that when the Countess arrived at the wedding, a good fifteen minutes before her daughter, the crowd exclaimed "My God, is that the mother of the bride" and the poor bride was completely forgotten! 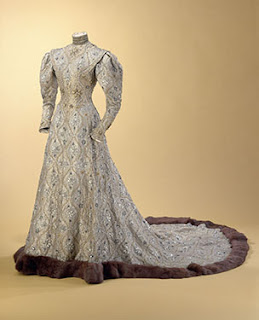 The Countess Greffulhe lived a very long life and maintained her unique sense of style until the end.  And though Marcel Proust immortalized her in prose and worshiped her in private, she did not return the favor and refused his repeated requests for a photograph.  Fortunately for us, the legend lives on in this fascinating testament to a woman ahead of her time.
Posted by Georgina Kelman at 6:18 PM No comments:

Now that summer is drawing to a close, it's time to catch up on the exhibitions that I had been meaning to go to and are about to close.  One of the shows on my "must see" list was "Stuart Davis:  In Full Swing" on view at the Whitney until September 25.  So, last week on a beautiful September afternoon, I took a ride downtown on the Number 1 train and checked it out. 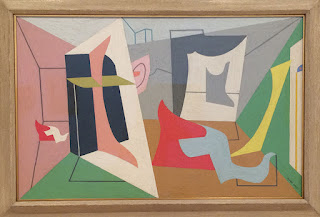 Stuart Davis (1892-1964) is a study in contrasts.  Born in Philadelphia to artist parents, he grew up in the company of painters from the Ashcan school who promoted social realism and the role of everyday experiences in art.  Exposure to Fauvism and Abstraction, primarily at the groundbreaking Armory Show of 1913, introduced the idea of form and composition taking precedence over subject and caused Davis to question his formative beliefs. 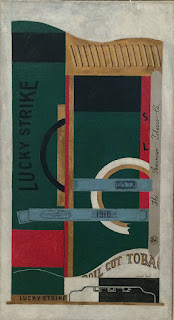 Conflicted over the idea of pure abstraction superseding the social responsibility of art, Davis strove to reach a happy medium by developing a style that used bright colors and abstract shapes to express the speed and excitement of modernism. 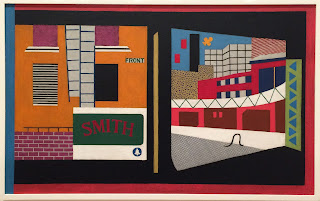 Davis' "Aha!" moment arrived when he successfully merged every day objects with the avant-garde creating a look that was both European and American, Abstract and Realistic. 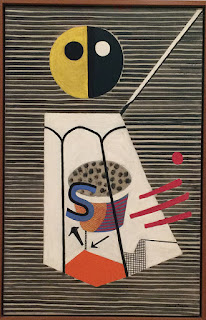 After World War I, Paris was the undisputed center of the art world attracting painters, writers and musicians from all over the world.  Stuart Davis did not make the pilgrimage until 1928, when, with the support of Gertrude Whitney, he booked passage and stayed in the French capital until the crash of 1929 forced his return to the States.  The thirteen months he spent soaking up the fertile atmosphere were seminal to his artistic development and informed his work for the rest of his career. 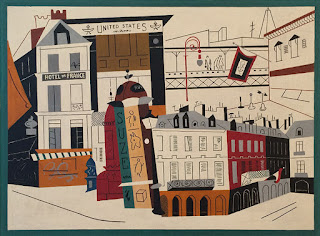 The Great Depression left Davis, and many other people, desperate for an income, and he turned to mural painting to earn some money.  In murals, he found a large canvas on which to paint his vivid abstractions filled with energy and motion. 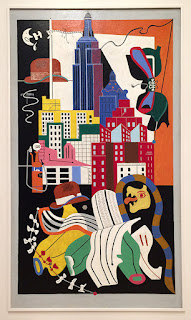 Another source of inspiration was commercial advertising.  Davis was a pioneer in the use of popular imagery and words as artistic subjects, a treatment later made famous by Pop artists such as Andy Warhol and Ed Ruscha. 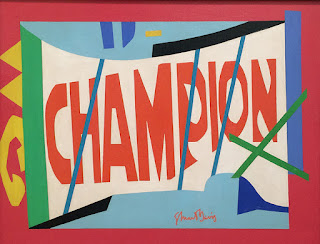 In his later years Davis continued to explore abstract shapes making them bigger and more dominant, but reduced his color palatte to just three, red, green and yellow, plus black and white. 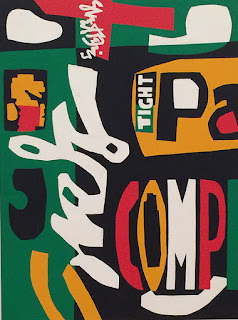 "Stuart Davis:  In Full Swing" gives visitors a fresh perspective on the work of this American icon.  Davis' unique mélange of abstraction and realism, of popular culture with fine art, of tradition with modernity and with American and European sensibilities, gives his work a unique place in both the history of art and as an influence on contemporary culture.
Posted by Georgina Kelman at 11:35 AM No comments: 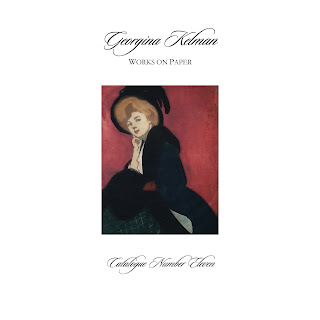 Though the summer days are getting shorter and the sun has lost its bite, the new fall season is right around the corner and that is cause for some celebration.  Since 2006, I have ushered in the autumn with my annual catalogue presenting a selection of fine prints, drawings and watercolors acquired throughout the year.

For the first time the catalogue is structured around a theme, "Cherchez la femme", and features works honoring women from Belle Epoque "coquettes" to World War I nurses through mediums ranging from drawings, lithographs, pochoirs and etchings.  As usual, there is something for almost every taste and pocketbook.

This edition is somewhat bittersweet as it is the first time that my mother no longer with us, anxiously awaiting its arrival in the post.  I honor her memory with this small tribute to a woman who was a model of independence, fortitude and positivity.
Posted by Georgina Kelman at 3:21 PM No comments: