"To Have and Have Another"

It's been a glorious summer here in New York City.  A stark contrast to the non-stop cold and snow that marked the winter of 2014, this has been a season for picnics in Central Park, strolls along the Hudson River, and that quintessential summer drink, the gin and tonic.  So you can imagine my delight when I recently discovered a small volume dedicated to classic cocktails by a legendary consumer thereof, with the irresistible title "To Have and Have Another - a Hemingway Cocktail Companion" by Philip Greene. 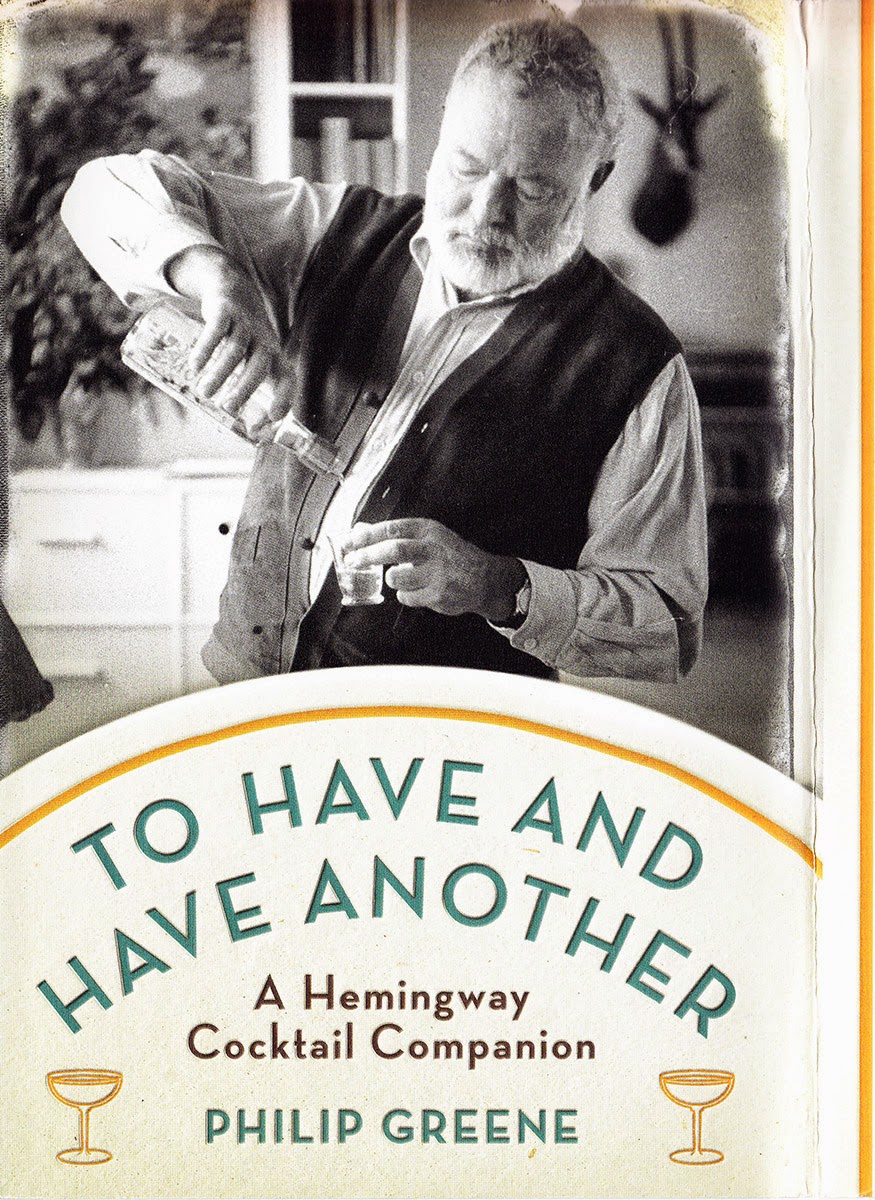 Mr. Greene, a founder of the Museum of the American Cocktail (who knew such a thing even existed?!) comes by his devotion to the subject honestly.  He is a descendant of the Peychaud family of New Orleans - creators of the Peychaud's Bitters essential to a true Sazerac - and an expert on the topics of cocktails and mixology.  But he is also a major fan of Ernest Hemingway who was a master writer, hunter, fisherman, bull fighter, womanizer and probably one of the world's leading consumers of alcoholic beverages before his sad demise in 1961.

So it is a natural fit for Philip Greene, who serves as a very sober Counsel for the U.S. Marine Corps during the day, to combine his passion for the history of libations with a recipe-filled biography of one of their biggest patrons.  Let me be clear, the author is by no means advocating the kind of excessive consumption that bedeviled Ernest Hemingway.  More accurately, this is a view of one of the greatest personalities of the early 20th Century as seen through a highball glass.  Or a Martini glass.  Or whatever glass he happened to be holding that contained the best, local and atmospheric cocktail of the moment. 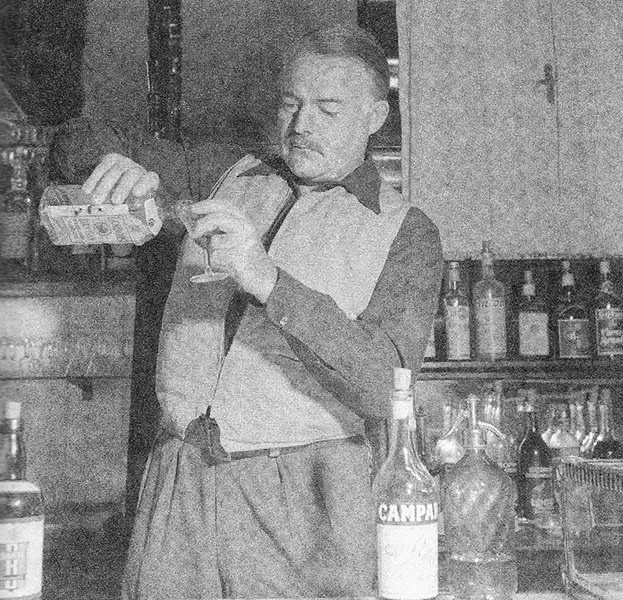 Like, for instance, the "Jimmie Special" a concoction of French aperitifs and Cognac enjoyed by Hemingway when he first arrived in Paris in 1921 and was invited to Gertrude Stein's famous literary salon.  Or the "Papa Doble / The Wild Daiquiri" created around 1947 when he was patronizing La Floridita Bar in Havana and rum was the drink of the island.  Or the "Bloody Mary" invented at Harry's New York Bar in Paris circa 1921 and supposedly introduced by Hemingway to Hong Kong in 1941.

Not surprisingly, the Martini was a popular drink with Hemingway and his crowd and there is an entire chapter devoted to its history, recipes and variations, and the role it played in his writing - almost a character in itself.

Contrary to what you might be thinking right now, I am not a big hard liquor tippler, but I do have a fondness for an ice cold gin and tonic on a hot summer day.  Sure enough, Mr. Greene has included a recipe for this classic as well as suggested reading material to accompany the drink!  While I have not yet picked up Islands in the Stream ("Bimini", Chapter 3), I did experiment with the addition of Angostura bitters to the traditional mix and enjoyed the new flavor immensely.  Indeed, I might have to have another just to make sure!!  Cheers!
Posted by Georgina Kelman at 4:01 PM No comments:

"The Pre-Raphealite Legacy" @ The Met

Looking for something to fill the need for culture without spending hours in a museum on a beautiful summer day?  I have the perfect exhibition for you!  Presented in two galleries in the Lehman Wing at the Metropolitan Museum of Art is a thorough but concise look at the "Pre-Raphaelite Legacy" and its contribution to the fine and decorative arts. 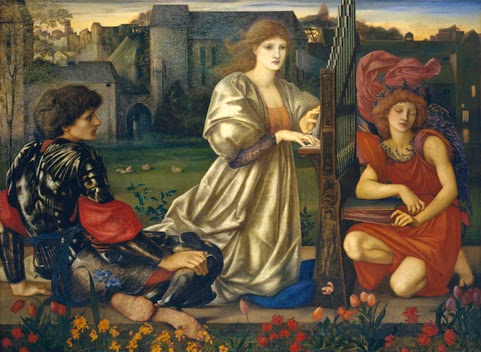 The Pre-Raphealites actually began as the Pre-Raphaelite Brotherhood in London in 1848 when a group of seven young artists and writers began to create in a radical new style.  Although the original group disbanded shortly after, their fresh approach to art and design continued with the second generation of Pre-Raphaelites who took up the cause with a renewed vigor and kept it alive for nearly a half century.  The Pre-Raphaelites championed Beauty and the artistic whole.  They believed in romantic idealism and visual splendor, art for art's sake and the equalization of all forms of artistic endeavor from sculpture to writing to home decor. Drawn exclusively from the Metropolitan Museum's own collection, this exhibition is a brief but excellent overview of the Movement, its aesthetic and its primary protagonists.   Drawings on paper, woven tapestries, printed books, ceramic plates, wallpaper, furniture and stained glass windows are all on view and exemplify the completeness of the movement - indeed, how the Pre-Raphaelites were advocating a life style rather than just producing objects. 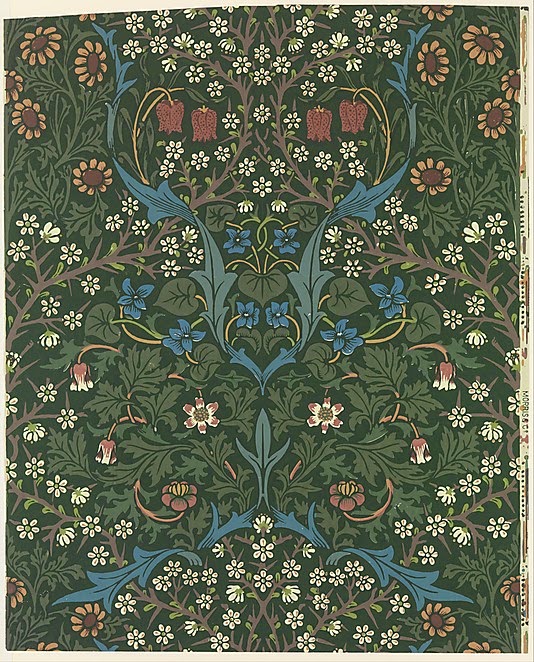 The influence of the Pre-Raphaelites can be seen in many 20th century art movements from Symbolism to Surrealism and though its popularity waxes and wanes, the idea of beauty for beauty's sake continues to fascinate.
Posted by Georgina Kelman at 5:59 PM No comments:

It's Christmas in July at Rockefeller Center!  In the very spot reserved for the iconic Christmas Tree during the month of December, summer visitors can marvel at another giant, decorated, living work of art.  Thanks to a unique public/private collaboration, Rockefeller Plaza is now graced by the mammoth topiary creation of American Post-Pop artist Jeff Koons (b. 1955) entitled "Split-Rocker". 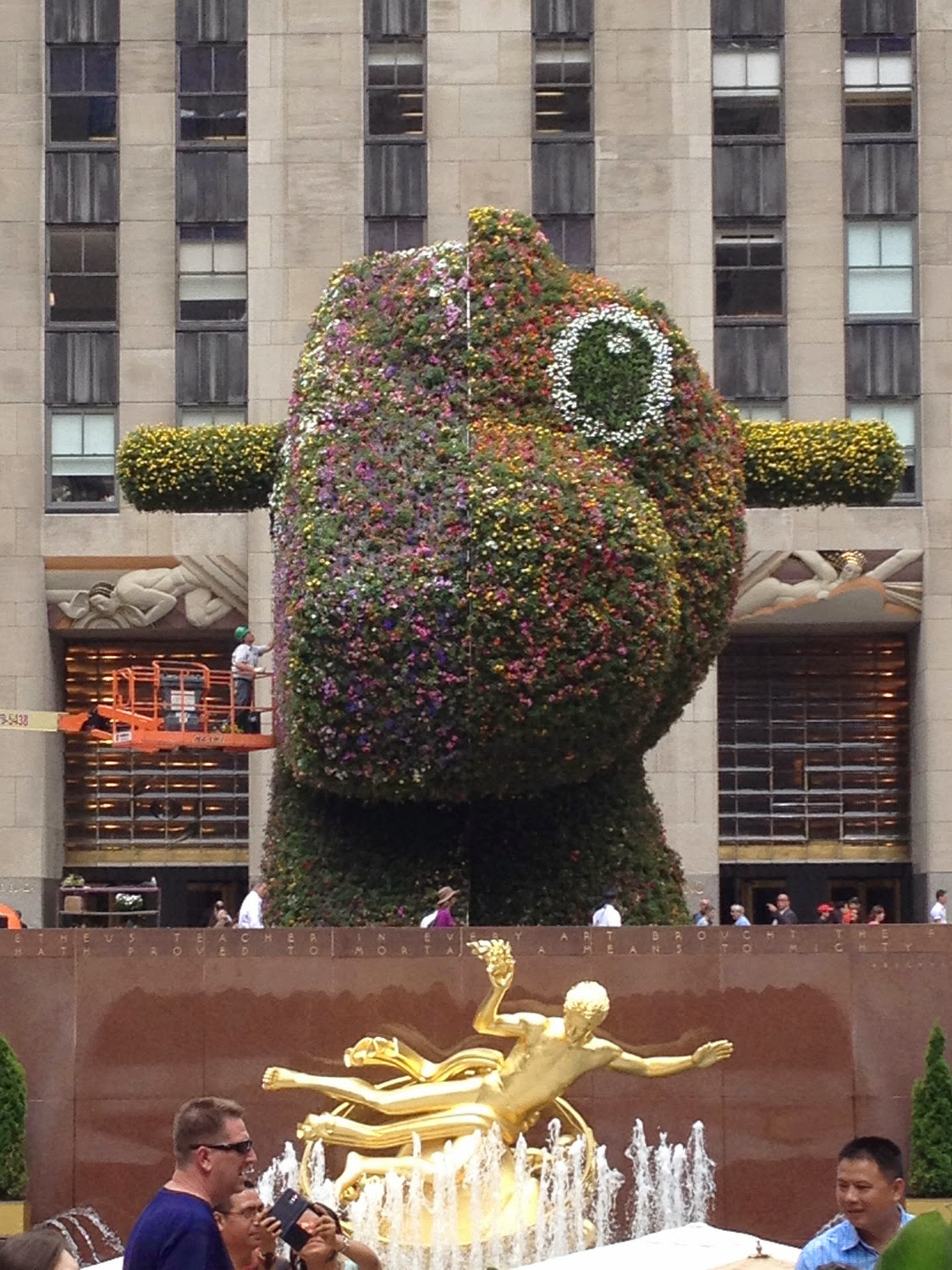 Standing 37 feet tall, "Split-Rocker" is a Brobdingnagian combination of a child's rocking horse and a toy dinosaur.  50,000 flowering plants including begonias, geraniums and petunias entirely cover a stainless steel armature that houses its own internal irrigation system. 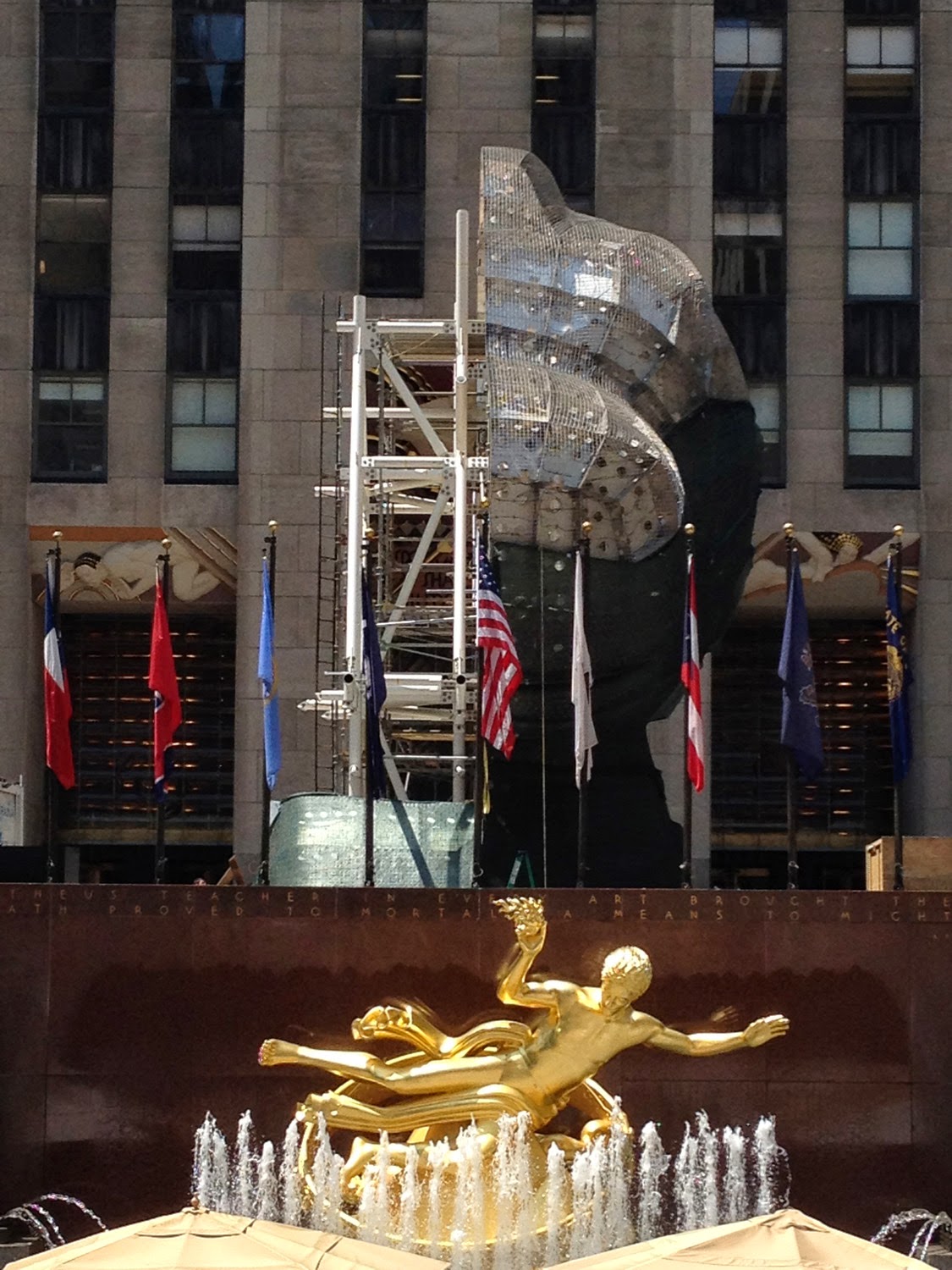 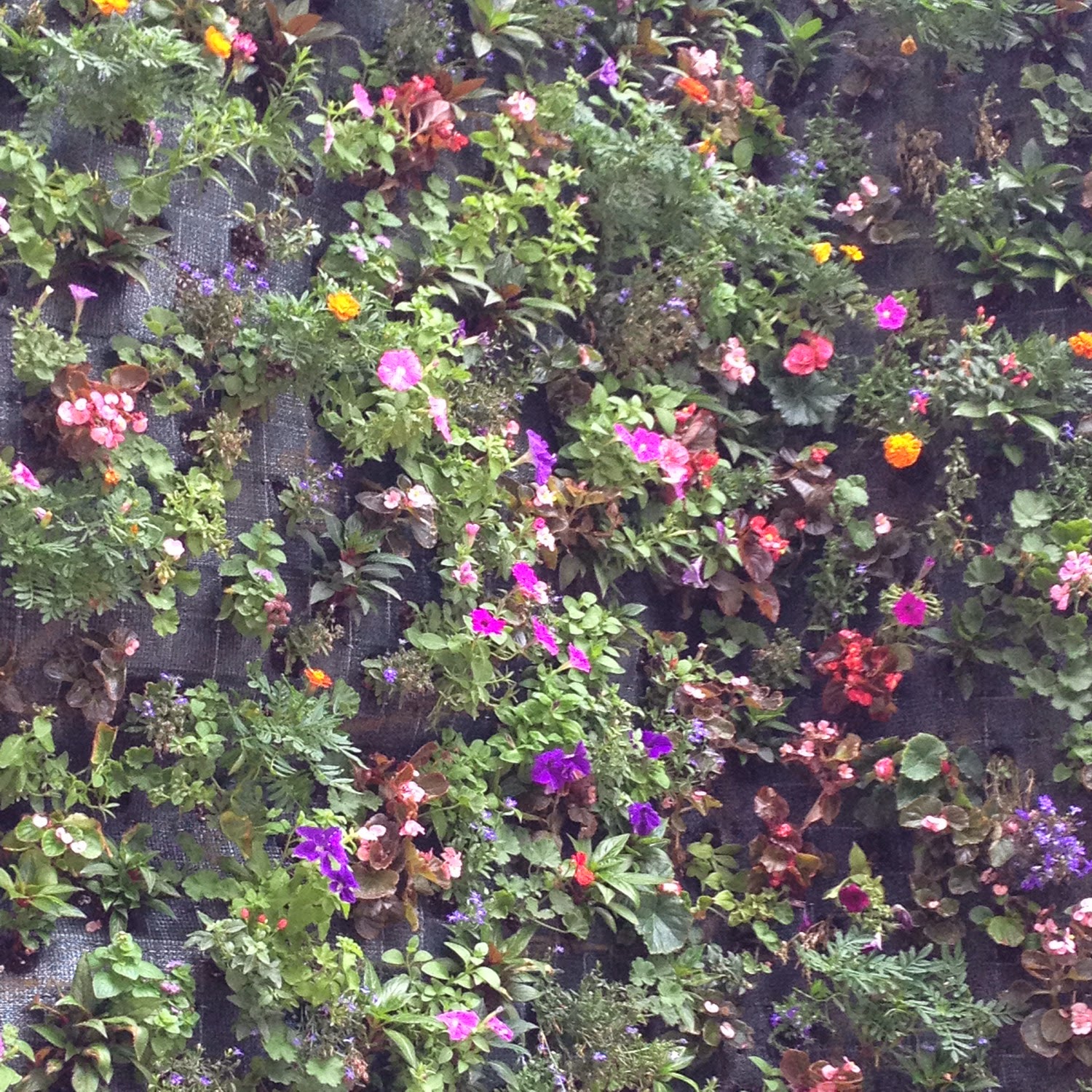 In this sculpture, Jeff Koons has taken two halves that don't quite match, enlarged them to gigantic proportions and joined them together.  The resulting split clearly defines the two parts although the handles on either side act as a unifying axle. 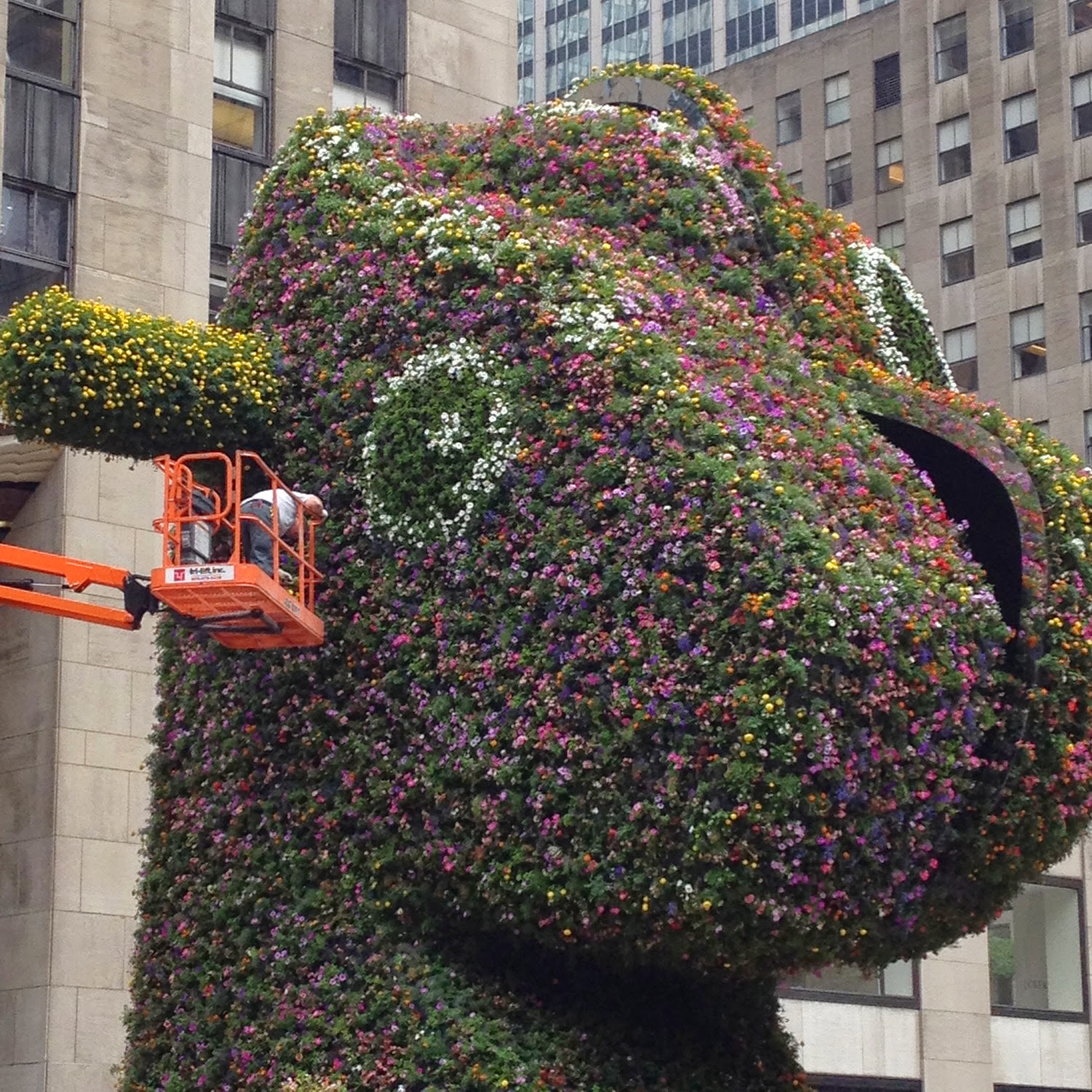 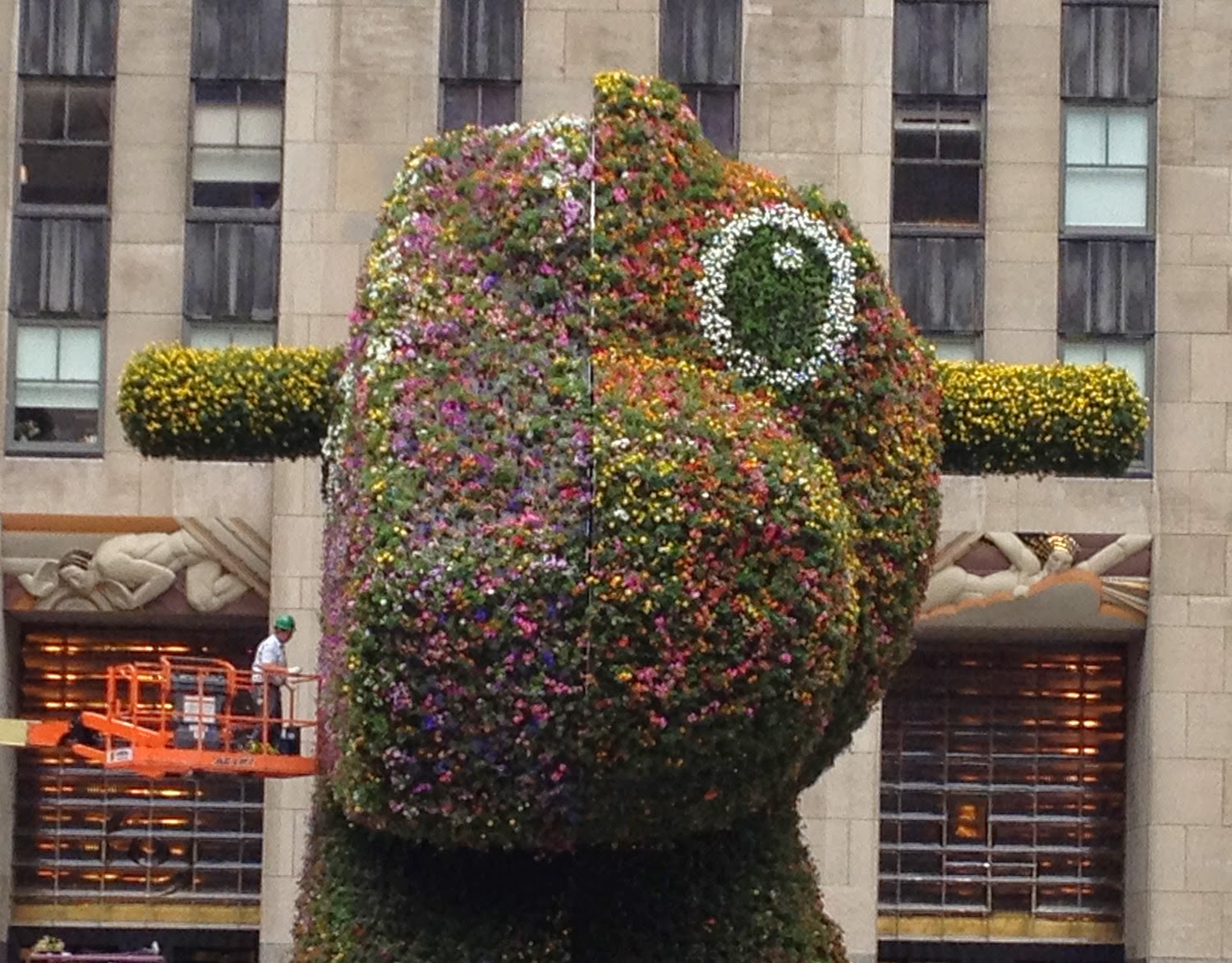 The work is a riot of color and you can't help but smile when looking at the goofy eye of this wacky hobby horse!

"Split-Rocker" is presented in conjunction with Jeff Koon's first New York retrospective now on view at the Whitney Museum and will continue to blossom until September 12. 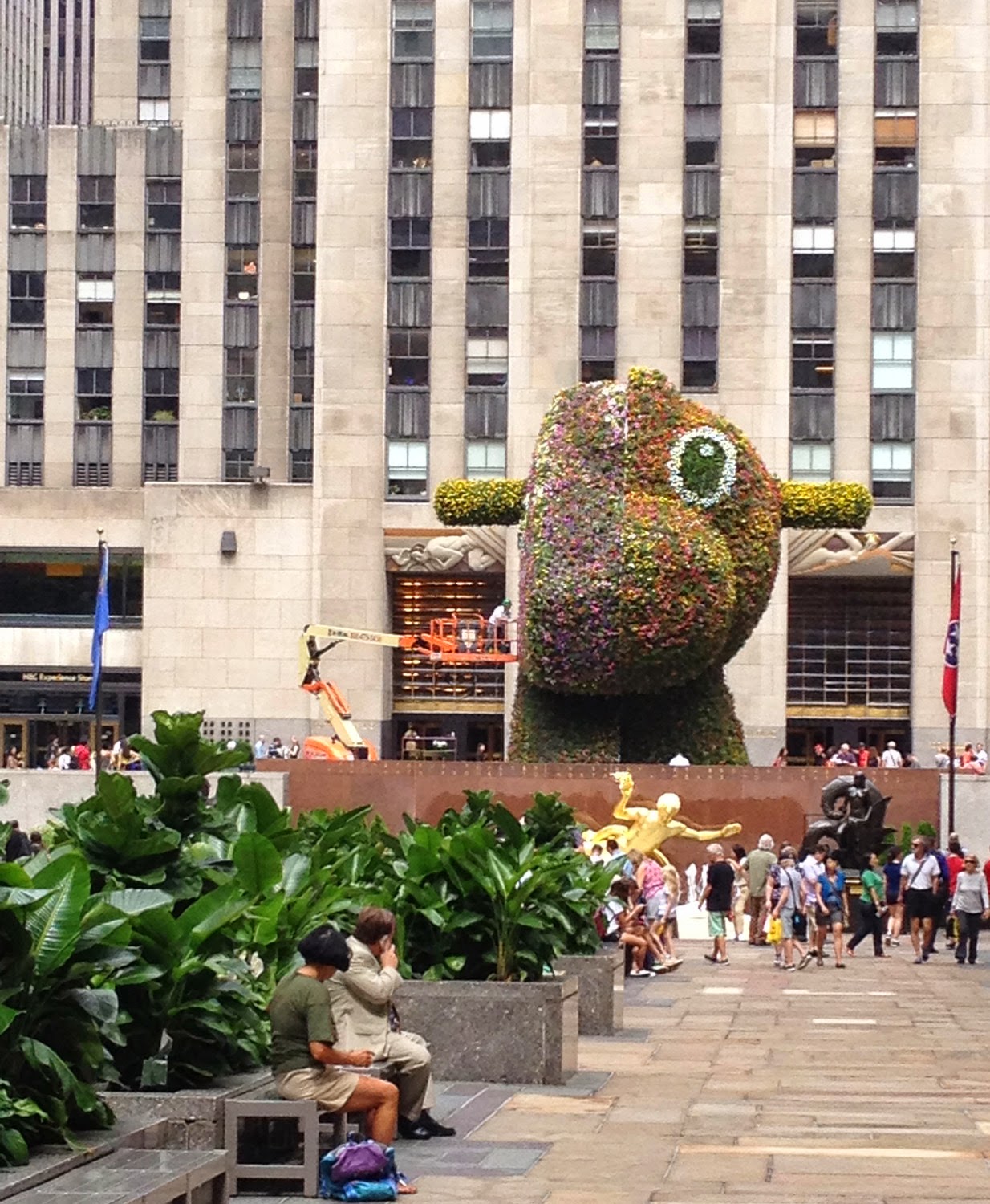 Posted by Georgina Kelman at 6:18 PM No comments: