"Action/Abstraction" at The Jewish Museum 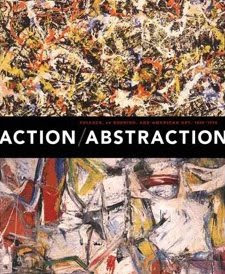 The 1940's were a watershed period in American painting. Europe was in the middle of a terrible war and American artists were seeking to establish themselves as a separate and important group in the art world.

Two New York critics were particularly influential on the art scene at that time and the rivalry was fierce. Harold Rosenberg's contention that "action", the creative physical act of making art, was the most important factor differed substantially from Clement Greenberg's promotion of "abstraction", the formal purity of the art object, as the main ingredient, and the two men battled to prove their points in every article they wrote for magazines and newspapers.

The Jewish Museum's current exhibition "Action/Abstraction: Pollock, de Kooning, and American Art, 1940-1976" seeks to explore these conflicting theories and how they influenced the birth of Abstract Expressionism and its subsequent schools. This revolutionary art movement pitted the two critics and their followers against each other but also launched the first truly American avant garde art scene to influence the rest of the world.

A 1952 quote by Harold Rosenberg sums up his hypothesis - "At a certain moment, the canvas began to appear to one American painter after another as an arena in which to act...What was to go on the canvas was not a picture but an event...The gesture on the canvas was a gesture of liberation...". He championed such Modern masters as Willem de Kooning (his painting "Woman V", 1952-3, is at left) who embodied Rosenberg's ideal of action and physical intensity.

Meanwhile, Clement Greenberg's proposal that "The essence of Modernism lies...in the use of characteristic methods of a discipline to criticize the discipline itself...Because flatness was the only condition painting shared with no other art. Modernist painting oriented itself to flatness as it did to nothing else" reiterates his belief that color and formality are the basis of Abstraction. Greenberg's artists of choice included Clyfford Still and Hans Hofmann (see his oil "The Gate", 1959-60, at right).

It seems odd to me that Greenberg was a huge promoter of the work of Jackson Pollock as I have always found Pollock's drip paintings the ultimate "action" painting, more in line with Rosenberg's arguments of physical involvement in the creation of art. But Greenberg considered Pollock to be the "epitome of aesthetic value" and admired the purity of his paintings, the formality of his "making marks on a flat surface" while Rosenberg considered Pollack's work to be an "existential drama". History has placed Jackson Pollack solidly among the top echelon of 20th Century artists, and Pollack and de Kooning were both cornerstones of the Abstract Expressionist movement.

Pollock, de Kooning and other pioneers of Abstract Expressionism are well represented in this show by important works lent by major institutions. The exhibition follows the metamorphosis of this school into its offshoots - Color Field painting, Fluxus, Neo Expressionism to name a few, with excellent examples by such artists as Morris Louis, Joan Mitchell, Philip Guston and Mark Rothko.

While this exhibition may not have answered all the visitor's questions about the philosophies of these critics, it left no uncertainty about the importance of the movement and Rosenberg and Greenberg's profound influence on the art world of the Post World War 2 era. The balance had shifted and the new world had assumed the leading role in forward thinking, not just in the world of art, but social, business and political arenas as well.

"Action/Abstraction" is on view at The Jewish Museum until September 21st.
Posted by Georgina Kelman at 6:53 PM No comments:

For apostles of Modernism and the Avant Garde, the name Walter Gropius inspires reverence and veneration. For good reason - as the founder of the school of design known as the Bauhaus, Gropius had an enormous and lasting influence on modern architecture, the applied and graphic arts and theater and interior design.

Walter Gropius (1883-1969) founded the Bauhaus School (Bauen = to build, Haus = house) in Weimar, Germany in 1919. Based on the principles of the British Arts and Crafts movement established by William Morris, both disciplines proposed that art and architecture should meet the needs of society and there should be no special status conferred upon the fine arts as opposed to practical crafts. Marked by an absence of ornamentation and an appreciation for economy, the Bauhaus endeavored to utilize modern materials and technology in an aesthetically pleasing and communally friendly way.

Gropius' new school attracted many followers including the designer Marcel Breuer and artists Paul Klee, Wassily Kandinsky, Lyonel Feininger and László Moholy-Nagy, and in 1925 the headquarters were relocated into a large group of concrete and glass buildings in Dessau. In 1930, the Bauhaus came under the directorship of Ludwig Mies van der Rohe, then in 1933 the institute was closed by the Nazis as "subversive" and "un-German".

Recognizing the increasingly dangerous atmosphere in Germany, Walter Gropius managed to leave the country using the pretext of a temporary job in England. Eventually he was approached by Harvard University, where, in 1937, he became a Professor of Architecture at their Graduate School of Design. He, his wife Ilse and their 12 year old daughter Ati arrived in the United States almost as refugees with very few possessions and no where to live. A generous patron offered the Gropius' 6 acres of verdant land in Lincoln, Massachusetts, and he set to work designing a residence that would combine the principles of the Bauhaus movement with the practical needs and aesthetics of living in New England. 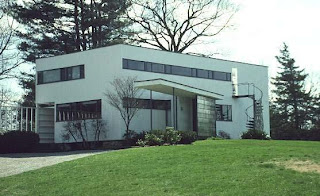 In 1938 what came to be know as The Gropius House was completed. It was a modest but totally functional family home that incorporated his ideals of form, practicality and modern technology while using traditional elements of New England architecture. The result is a combination of customary materials such as wood, brick and fieldstone with mass produced industrial products like glass blocks, acoustical plaster, cork flooring and chrome banisters. Gropius' goals of efficiency in design, simplicity, harmony with nature and economy of cost were all successfully integrated in this revolutionary construction.

Walter Gropius lived in this house until his death in 1969 and his wife remained until she passed away in the 1980's. It is now a National Historic Landmark and is open to the public for guided tours operated by the Historic New England preservation organization. Visitors will be fascinated not only by the design and construction, but also the interior that remains fully furnished with an impressive collection of vintage Bauhaus furniture by Marcel Breuer. Personal touches such as correspondence, books, clothing and dishes make this much more than a museum but a glimpse into the private life of one of the 20th Century's great innovators.

With thanks to our guide, Henry Hoover, for his entertaining and very informative insight into the house and its history.
Posted by Georgina Kelman at 3:57 PM No comments: