Founded in 1931 by Gertrude Vanderbilt Whitney as a showcase for her impressive collection, the Whitney Museum of American Art maintains its original focus on American art and artists of the 20th and 21st Centuries. Since 1966 the Whitney has been at home on Madison Avenue at 75th Street, in an impressive Modern building designed by Marcel Breuer. As well as the museum's superb permanent collection of works by American Masters such as Benton, Calder, Frankenthaler, Hopper, Johns, O'Keeffe and Warhol, they are known for their excellent temporary exhibitions, the most famous of which is the Whitney Biennial.

For followers of Contemporary Art there is no more exciting event than this one. Since 1932 when it was an annual presentation, through its 75th incarnation on right now, the Whitney Biennial has been THE show for young, emerging American artists to gain status and exposure and for observers to try to predict the trends in the art world. The Whitney Biennial has always reflected the prevailing social, economic and cultural climate often with strident messages and striking uses of cutting-edge mediums.

The 2010 Edition of the Whitney Biennial is no exception. Although the work in general is not as shocking as in prior years, it is still very reflective of what up-and-coming artists are concerned with and how they see the world. The current economic situation is quite evident in the less spectacular installations and safer, more reflective works of art. The hyper art market of two years ago is definitely over, but there are still some interesting and provocative pieces on view. 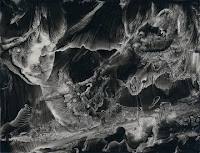 I am not an aficionado of the Contemporary art scene and I would never attempt to predict the next Picasso from this lot, but I did have some favorites. Like Roland Flexner whose ink drawings evoked beautiful, surreal landscapes in black and white and James Casebere's large format photographs of colorful but uninhabited model subdivisions. I found Kate Gilmore's video of herself wearing a polka dotted dress and high heels kicking and clawing her way up out of a sheet rock column very entertaining, but I suspect she had a deeper meaning than simply venting her frustrations. Daniel McDonald's diorama of a Michael Jackson doll boarding the mythical ferry of Charon to be taken to the underworld was an amusing take on the demise of the pop icon. And the white hearse with the performance video playing by The Bruce High Quality Foundation was a real attention getter.

There is a lot of hype in the New York art world this week with the opening of the Whitney Biennial just ahead of the annual Armory Show and its satellite fairs and the Art Dealers Association of America "Art Show" at the Park Avenue Armory. I'll be visiting several of these fairs in the next few days and will report back with my observations. But if you're curious about the state of American Contemporary art and artists, pay a visit to the Whitney and check it out. The Whitney Biennial runs until May 30.
Posted by Georgina Kelman at 4:31 PM No comments: 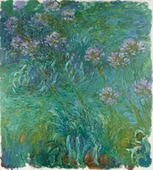 If the dirty, slushy, sloppy, last gasp of winter (we hope!) is getting you down, a breath of spring is waiting for you right now in a second floor gallery at New York's Museum of Modern Art.

For the first time since opening the new building in 2004, MoMA is presenting their entire collection of Claude Monet water lily paintings, along with a couple of pertinent loans, in one area. Imagine, being surrounded in a room filled with Monet's Impressionist masterpieces! But are they really?

In 1883, at the age of 42, Monet moved into the pink house with the beautiful garden in Giverny, a small town just North of Paris. At that time he was the "king" of Impressionism and he enjoyed both critical and financial success. But with the death of his wife and son, the outbreak of World War I and his diminishing eyesight, Monet's world changed drastically and he shifted his focus to interpreting his own marvelous surroundings. From 1914 until 1926 he worked tirelessly on series after series of paintings depicting his flower garden and water lily pond in increasingly abstract versions. Working outdoors in the spring and summer he filled canvas after canvas with oil sketches that captured nuances of light, weather and location. In the winter he moved indoors, into his specially constructed studio where he transferred these studies into massive canvas', sometimes reaching twenty feet in length. What was unique about his method was his habit of working for years on one piece - adding layer upon layer of paint until the initial image was buried under a thick impasto and the viewer was left with more of a sensation of what might have been, rather than what actually was.

When these large canvas' and triptychs were first presented to the public in 1927, they were met with resounding disappointment. Critics referred to them as "messy" and "blurry" and speculated that the artist's cataracts might be impeding his work. It was not until well after his death, in the 1950s, that these paintings were recognized as proto-masterpieces of Abstract Expressionist Art and they have remained stars of any museum fortunate enough to have one in the collection.

Which brings me back to MoMA and their current exhibition. One room, six superb paintings on a theme, each is different but part of a whole. Beautifully installed with oil sketches like "Agapanthus" (above right) complimenting the 41 foot, three panel, jewel-colored monument that absorbs the onlooker into its shimmering reflections of clouds in the water. Most of us have seen our share of Monet paintings in various museum installations, but the impact of being surrounded by such works is a totally different experience. And what this small but excellent presentation does most effectively is explain why Monet really was a master of Modern Art and not just the 19th Century variety of pretty pictures.

Monet's Water Lilies will be hanging at MoMA until April 12th.
Posted by Georgina Kelman at 10:26 AM No comments:

Jane Birkin at the French Institute 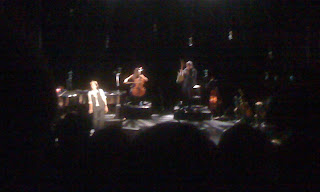 Last night, the iconic Jane Birkin played to a sold-out house at Florence Gould Hall in New York's French Institute : Alliance Française. I was thrilled to be in the audience and amazed that even now, at the age of 63, Miss Birkin exudes the same kittenish sexuality that made her a star in the early 1960s but with a more mature and confident presence.

Jane Birkin was born in London in 1946 to a naval officer and an actress. Her willowy frame and her alluring looks made her a perfect model for the styles of the Swinging Sixties and before long she added film star to her resume. Her success took her across the English Channel to Paris where she won a role in the movie "Slogan" despite not speaking any French. The rest, as they say, is history. It was here that she first collaborated with the superstar and heart throb Serge Gainsbourg. The on-screen duet quickly led to a major off-screen romance and the pair were soon embroiled in an international scandal when they recorded the overtly sexual "Je t'aime...moi non plus [I love you...neither do I]", complete with orgasmic sound effects, which, naturally, became a smash hit in no time! They married, had a daughter (actress Charlotte Gainsbourg), and continue to collaborate musically while she pursued a career in film. Ultimately, Serge Gainsbourg's excessive drinking exacerbated their break up, although they remained on very good terms until his death from a heart attack in 1991.

Rather than put that part of her past behind her, Jane Birkin honored Gainsbourg's memory and their magical time together by continuing to perform his songs. Though not as naturally musically gifted as he, Jane Birkin puts her own special stamp on these melodies with her whispery, cottonball voice and her limber, almost gangly, dancing. Her appearances on concert stages around the world embody a combination of his classics and recent works written especially for her by a few, trusted composers.

Last evening's performance was both a trip back in time and very much in the present. While her trademark bangs have been replaced with a tousled short haircut, and the mini-skirt traded for a Charlie Chaplin inspired "Garçonne" look, Jane Birkin was still very much the bright-eyed ingenue but calmer and grateful for the success in her life. The predominantly French audience went crazy with applause and she and her four piece band graciously obliged with several wonderful encores. This after an eight hour bus trip from snow-bound Washington DC!

There are very few true icons in the world and Jane Birkin definitely ranks among them. Is it any wonder that Hermes named a handbag after her?!?!
Posted by Georgina Kelman at 2:46 PM No comments:

Happy Year of the Tiger!

Next Sunday, February 14th, while Westerners are celebrating St. Valentine's Day, the people of China and ex-pats in Chinatowns everywhere will be ushering in Lunar New Year 4708, the Year of the Tiger! 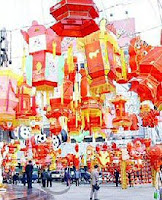 Chinese New Year is the longest and most important holiday in the Chinese calendar and its dates vary annually as determined by a combination of solar and lunar movements. New Year's Day always falls on the darkest day, the new moon, and the festivities continue for 15 days, until the brightest day, the full moon, celebrated with a Lantern Festival.

According to legend, Buddha asked all the animals to meet with him on Chinese New Year and twelve came. Buddha named a year after each of the animals and proclaimed that people born in that animal's year would inherit some of its characteristics. However, contrary to my fervent hope that the year of one's birth would be a lucky one in the future, my Chinese horoscope for this year was very discouraging!

Traditionally a time for family and feasting, reunion and thanksgiving, the New Year's celebrations a steeped in ancient customs and beliefs. The color red predominates as a symbol of fire, a purifying force that can drive away bad luck. Fireworks are lit so the noise will frighten evil spirits, and wishing trees are decorated with the faithfuls' wish-papers tied on in the hope that their prayers will be answered by the Gods. The Dragon Dance is a highlight of many New Year's celebrations with many dancers participating under a costume that may be 30 feet long. 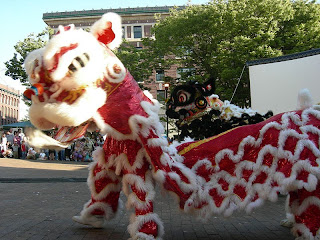 This year I had the honor of being invited to celebrate the Year of the Tiger, a little early, with a Chinese Celebration Dinner at a restaurant in New York's Chinatown. What a feast! Eleven courses of exotic foods including roast suckling pig, seafood and shark tongue soup, fried rice wrapped in a lotus leaf, ee-fu noodles, red bean dumpling soup and cut up oranges for dessert, all dishes intended to ensure long life and good fortune! All I know is that it was delicious!

As our Chinese friends gather to celebrate this joyous occasion, I share their wish for "Kung Hei Fat Choy", "Congratulations and Be Prosperous" in the year ahead! 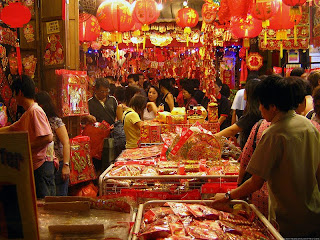 Posted by Georgina Kelman at 10:43 AM No comments: