What's On at The NYPL for the Performing Arts

If you can navigate the ongoing construction through the Lincoln Center complex to the Library for the Performing Arts, your perseverance will be rewarded with two marvelous shows guaranteed to delight theater and ballet fans.

To celebrate the centennial of the Ballets Russes (see my blog of May 13) the Library is presenting "Diaghilev's Theater of Marvels: The Ballets Russes And Its Aftermath". This exhibition is both a historical look back at this revolutionary dance company and a tribute to its lasting influence on ballet today. By drawing on the extensive collections of the Library and a few generous private collectors, curator Lynn Garafola presents a fascinating look at Diaghilev the man and his phenomenal creation, the Ballets Russes. Featuring vintage photographs of patrons and dancers, promotional items such as posters and programs, costume designs and the costumes themselves, letters, ticket stubs, manuscripts and even video clips, this exhibition transports the visitor back in time to the Paris and Monte Carlo of the early 1900's.

What I found most fascinating about this dance company was the degree of collaboration among major artists in various fields. Not just the obvious musical partnerships with composer Igor Stravinsky or choreographers Fokine, Nijinsky, Massine and Balanchine, but the important contributions made by many famous visual artists of the day. No detail was too small to merit attention - from programs and posters to costume and set design - the roster of participants reads like a "Who's Who" of Modern Art. Leon Bakst, Christian Bérard, Eugene Berman, Jean Cocteau, Natalia Goncharova, Marie Laurencin, Fernand Leger, Henri Matisse and Pablo Picasso all were associated with this revolutionary new company, although Joan Miro and Max Ernst were publicly denounced by Surrealist Founding Father André Breton for participating in "commercial" activities! Far from a "secondary" commission, designing for the Ballets Russes was accepted as a legitimate and indeed prestigious artistic enterprise. There is no question that it was Diaghilev's vision that made the Ballets Russes what it was, but a large part of the company's success can be attributed to the combination of efforts by so many gifted artists.

Moving to the gallery on the Amsterdam Avenue level, we find a tribute to another 20th Century icon, Katharine Hepburn. "In her Own Files" is a look back at the stage and screen highlights of this remarkable actress. Still photographs, magazine covers, movie posters, telegrams, letters and video clips, culled from the Hepburn papers and the Library's own collection, recount the professional history of this versatile and respected actress.

The show is divided into four segments - her early frustrations as she tried to make it on Broadway; her ensuing success with the Theatre Guild and a national tour in the tile role of "Jane Eyre" before starring in "The Philadelphia Story" on stage and screen; a commitment to Shakespeare in the 1950's and 60's; and finally the roles she played later in her career such as Coco Chanel and "The West Side Waltz". While motion pictures are certainly mentioned, this exhibition focus' mainly on Hepburn's live stage performances and is a compliment to both the woman and the actress.

You can visit "Diaghilev's Theater of Marvels" until September 13th and "Katharine Hepburn" until October 10th. The New York Public Library for the Performing Arts is open Monday to Saturday and admission is free.
Posted by Georgina Kelman at 4:00 PM No comments:

The Dog Days of August have finally descended and it's time to get out of the city and cool off! But the beaches are crowded and time is limited so what better plan than to call up some friends and head out to scenic Mercer County, New Jersey, to explore the Delaware & Raritan Canal!

Now a part of the New Jersey State Park system, and listed on the National Register of Historic Places, the Delaware & Raritan Canal was once a major transportation link between Philadelphia and New York. Boats could navigate the Delaware River to Bordentown, and again from New Brunswick to the Hudson along the Raritan River. In the early 19th Century, the distance in between was excavated to create a 44 mile long canal. This water-highway allowed goods, and especially coal, to be shipped without loading the cargo on and off railroads and for many years reigned supreme as one of America's busiest navigational canals. Initially the barges were towed by mules along a tow-path but by 1843 the animals were replaced by steam engines. However, by the end of the 1800's, the stately pace of canal traffic was overtaken by the more efficient rail system and in 1932 commercial shipping was totally discontinued.

Although the D & R Canal was maintained as a water supply system by the State of New Jersey (a function that continues to this day), it fell into disuse until 1974 when the State Parks Department opened up the main canal and its offshoots, 60 miles in all, for recreational use. Today visitors enjoy jogging, hiking, biking and horseback riding along the old tow path and intrepid souls, like myself, venture out in rented canoes and kayaks to experience the canal from the water! What fun to paddle on a lovely summer day and see turtles sunning themselves on submerged tree trunks with birds chirping above! The banks were graced with majestic shade trees and beautiful wildflowers and every now and then a bridge or an old wooden structure came into view. 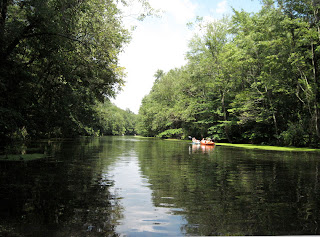 After all that fresh air and exercise it was time for something to eat and an outdoor barbecue was just the ticket. It was a perfect summer outing and another example of the hidden wonders that often lie just around the corner, you only have to look!

With many thanks to Chris and Lisa for organizing such an amazing day!
Posted by Georgina Kelman at 3:41 PM 1 comment: