A Perplexing Problem in Pittsburgh 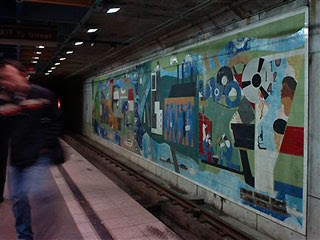 The City of Pittsburgh, PA, received an unexpected windfall this Spring when it was discovered that a 60 x 13 foot tile mural currently installed in the Gateway Center subway station is valued at over $15 million! The mural, entitled "Pittsburgh Recollections", was commissioned in 1984 from the African American artist Romare Bearden at a cost of $90,000. Since then, millions of commuters have passed through the station, most without paying much attention to the 780-square-foot cubist depiction of men and women and transportation.

With the impending renovation of the Pittsburgh subway system and plans for the demolition of the Gateway Center Station, city officials decided to have the artwork appraised before taking it down. Despite 24 years of grime and leaks, the mural, typical of Bearden's colorful interpretation of everyday people, is worth a lot more than the Port Authority of Allegheny County ever expected. This raises a whole new spectrum of issues as the care and insurance of such a valuable artwork is beyond the financial capabilities of the transit agency yet the City and its residents are loathe to part with this important piece.

Romare Bearden (b. 1911, Charlotte, NC - d. 1988, New York, NY) earned a reputation as one of the finest African American artists and writers to work at a time when "people of color" were not offered many opportunities in this, or any other, field. His immense natural talent was developed with studies at New York University, the Art Students' League (where he studied under the German Expressionist artist George Grosz) and the Sorbonne. Early experimentation with Cubism, evolved into a more abstract style and he used his human experience as a soldier, a baseball player, a musician and a writer, all tempered by the reality of being Black in the pre-civil rights United States. The result is honest without being bitter, a focus on a positive rather than a negative reality.

Romare Bearden overcame a lot of challenges to become the first Black artist to have a solo exhibition at the National Gallery of Art in Washington D.C., and is recognized as being one of the most innovative American artists, of any race, of the 20th Century. Now the City of Pittsburgh is facing a challenge and it will be very interesting to see how this is resolved in the months ahead! Stay tuned!
Posted by Georgina Kelman at 2:16 PM