A Surrealist Tour of Paris 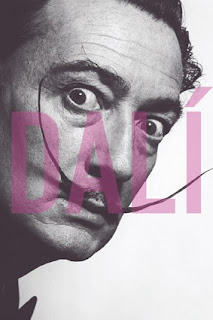 The "Must See" show in Paris these days is the Salvador Dalí retrospective at the Centre Pompidou.  Today is the last day it is open to the public and the museum has been open 24 hours a day for the past week to accommodate the crowds.  I, and I say this modestly, had anticipated the last minute crush of museum goers and went to see the show two weeks ago when I arrived in Paris and only had to wait one hour in line.

I cannot say that Dalí is a favorite artist of mine but he remains one of the most popular figures in the history of modern art.  His self proclaimed "genius" and commercial showmanship can be irritating, but one has to give the devil his due - he was ahead of his time, a master of self promotion and emblematic of the Surrealist movement.

This major exhibition traces his development as an artist from his early years as a student in Madrid through his meteoric rise to star on the Surrealist stage.  While he is probably best known for his dreamlike landscapes with meticulous attention to detail and often very sexually charged, he was also very active in the theater, in film and "happenings".  The Centre Pompidou show presents over 120 paintings, drawings, videos and objects that document the evolution of Dalí's theories and methods that earned him this extraordinary place in the history of art. 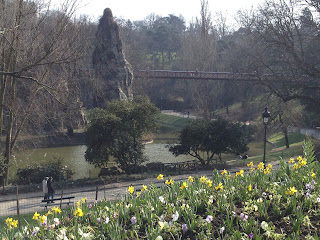 To continue on the Surrealist theme - today was a beautiful sunny, but not really warm, Monday and the perfect opportunity to visit a site that had been revered by the Surrealists since the beginning of the movement.  It was a rather long bus ride out to the 19th Arrondissement and the Parc des Buttes Chaumont, the third largest public park in Paris and the perfect place to be on a spring afternoon. 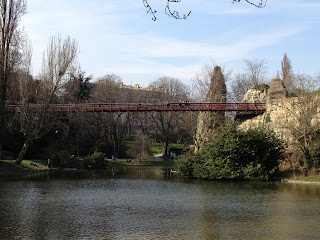 Although its history is rather grim - it was the site of a gallows in the 18th century and a dump after the French Revolution - it was reinvented as a park for the Universal Exhibition of 1867.  Its remarkable gypsum and limestone formations offer natural landscapes including cliff and a grotto with a waterfall, that, especially at night, appealed to the Surrealists' appreciation of the bizarre. 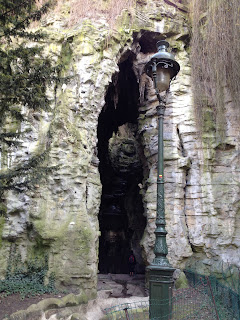 The park also features several notable man-made creations including a suspension bridge, the belvedere of Sybil and a 75 foot high overpass known as "suicide bridge". 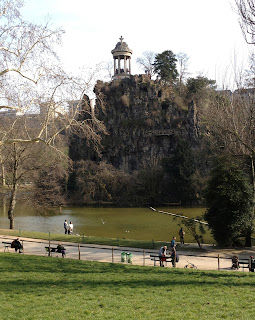 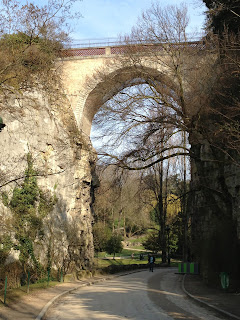 It also offers lovely gardens, three tea houses and two Guignol (the French version of Punch and Judy) theaters making the Parc des Buttes Chaumont a paradise for children and local residents.  Or visitors like me who enjoyed a walk in the footsteps of the 1920s Surrealists!
Posted by Georgina Kelman at 3:53 PM