"A Brief History of Color in Art"

With sincere apologies to my regular readers who would seem to be neglected, if not ignored, by me these past weeks, I promise to resume weekly blogs shortly.  In the meantime, in the spirit of "I couldn't have said it better myself" and to give you something very interesting to read, I am going to reproduce an article for The Art Genome Project by Sarah Gottesman that recently appeared in the Artsy Magazine.  Ms Gottesman has written an informative and rather entertaining essay on the history of pigments used in paintings and I hope you enjoy it as much as I did.  Herewith....


A Brief History of Color in Art

Artist invented the first pigments - a combination of soil, animal fat, burnt charcoal, and chalk - as early as 40,000 years ago, creating a basic palette of five colors:  red, yellow, brown, black, and white.  Since then, the history of color has been one of perpetual discovery, whether through exploration or scientific advancement.  The invention of new pigments accompanied the developments of art history's greatest movements - from the Renaissance to Impressionism - as artist experimented with colors never before seen in the history of painting. 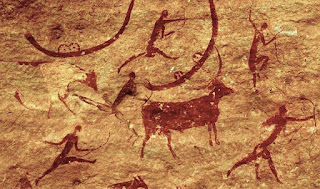 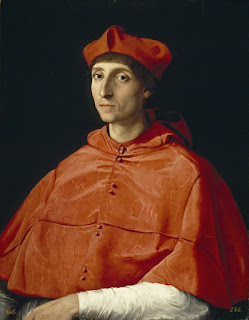 Found in iron-rich soil and first employed as an artistic material (as far as we know) in prehistoric cave paintings, red ochre is one of the oldest pigments still in use.  Centuries later, during the 16th and 17th centuries, the most popular red pigment came from a cochineal insect, a creature that could only be found on prickly-pear cacti in Mexico.  These white bugs produced a potent red dye so sought-after by artists and patrons that it quickly became the third greatest import out of the "New World" (after gold and silver), as explains Victoria Finlay in A Brilliant History of Color in Art.  Raphael, Rembrandt, and Rubens all used cochineal as a glaze, layering the pigment atop other reds (like red ochre) to increase their intensity.  A non-toxic source for red pigment, the cochineal bug is still used to color lipsticks and blush today.
Blue 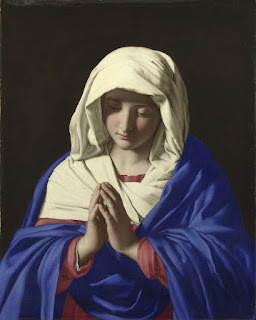 Sassoferrato
The Virgin in Prayer, 1640-1650
The National Gallery, London 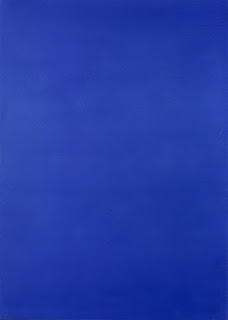 Ever since the Medieval era, painters have depicted the Virgin Mary in a bright blue robe, choosing the color not for its religious symbolism but rather for its hefty price tag.  Mary's iconic hue - called ultramarine blue - comes from lapis lazuli, a gemstone that for centuries could only be found in a single mountain range in Afghanistan.  This precious material achieved global popularity, adorning Egyptian funerary portraits, Iranian Qur'ans, and later the headdress in Vermeer's Girl with a Pearl Earring (1665).  For hundreds of years, the cost of lapis lazuli rivaled even the price of gold.  In the 1950s, Yves Klein collaborated with a Parisian pain supplier to invent a synthetic version of ultramarine blue, and this color became the French artist's signature.  Explaining the appeal of this historic hue, Klein said, "Blue has no dimensions.  It is beyond dimensions." 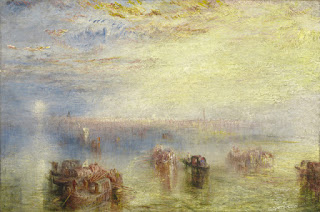 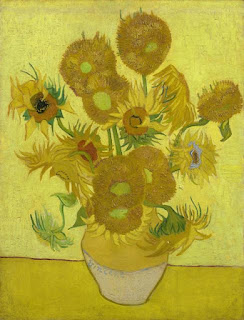 Few artists in history have been known for their use of yellow, though Joseph Mallord William Turner and Vincent van Gogh are the most notable exceptions.  Turner so loved the color that contemporary critics mocked the British painter, writing that his images were "afflicted with jaundice," and that the artist may have a vision disorder.  For his sublime and sun-lit seascapes, Turner used the experimental watercolor Indian Yellow - a florescent paint derived from the urine of mango-fed cows (a practice banned less than a century later for its cruelty to animals).  For brighter touches, Turner employed the synthetic Chrome Yellow, a lead-based pigment know to cause delirium.  Vincent van Gogh also painted his starry nights and sunflowers with this vivid and joyful hue.  "Oh yes!  He loved yellow, did good Vincent, the painter from Holland, gleams of sunlight warming his soul, which detested fog," wrote the painter Paul Gauguin of his friend and artistic companion.
Green 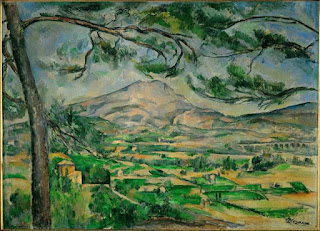 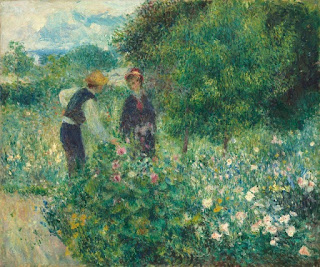 While the color green evokes nature and renewal, its pigments have been some of the most poisonous in history.  In 1775, the Swedish chemist Carl Wilhelm Scheele invented a deadly hue, Scheele's Green, a bright green pigment laced with the toxic chemical arsenic.  Cheap to produce, Scheele's Green became a sensation in the Victorian era, even though many suspected the color to be dangerous for artists and patrons alike.  The French emperor Napoleon Bonaparte's bedroom wallpaper even featured Scheele's Green, and historians believe the pigment caused the revolutionary's death in 1821.  By the end of the 19th century, Paris Green - a similar mixture of copper and arsenic - replaced Scheele's Green as a more durable alternative enabling Claude Monet, Paul Cézanne, and Pierre-Auguste Renoir to create vivid, emerald landscapes.  Used as a rodenticide and an insecticide, Paris Green was still highly toxic, and may have been responsible for Cézanne's diabetes and Monet's blindness.  Not surprisingly, it was eventually banned in the 1960s.
Purple 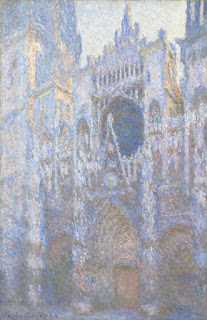 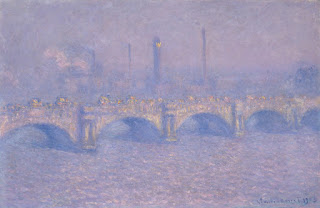 "I have finally discovered the true color of the atmosphere," Claude Monet once declared.  "It's violet.  Fresh air is violet."  The purple shadows and lavender specks of light that enliven Monet's haystacks and waterlilies owe much to a little-known American portrait painter named John Goffe Rand.  In 1841, Rand grew frustrated with the messy practice of storing paint in a pig's bladder, which was the prevailing method for preserving pigments at the time, and invented a more practical and portable option:  a collapsible paint tube made of tin.  This enabled artists like Monet to paint plein air, easily transporting their color to outdoor locations to capture impressions of the environment, and in turn led to the production of nuanced, pre-mixed paint shades in tin tubes, such as Manganese Violet, the first affordable mauve-colored paint that meant artists no longer had to mix red and blue to make purple.  The Impressionists - especially Monet - so adored the new hue that critics accused the painters of having "violettomania." 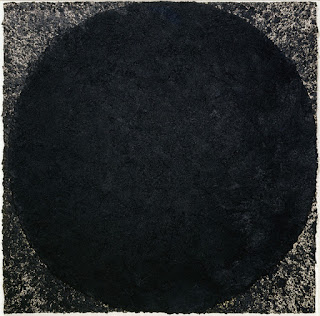 The darkest pigment found in Old Masters paintings is aptly named "bone black," and is produced by burning animal bones in an air-free chamber.  While the Impressionists avoided black paint - finding areas of darkness to be filled with color - American artists in the 50s and 60s returned to black with a vengeance.  Frank Stella, Richard Serra, and Ad Reinhardt all created monochromatic black paintings, stripping the canvas of any subject matter other than the paint itself.  Taken together, these painters prove that black is as nuanced a color as any other, capable of many permutations, tones, and textures.  Speaking about his practice in 1967, Reinhardt quoted the Japanese painter and printmaker Katsushika Hokusai, saying, "There is a black which is old and a black which is fresh.  Lusterous black and dull black, black in sunlight and black in shadow." 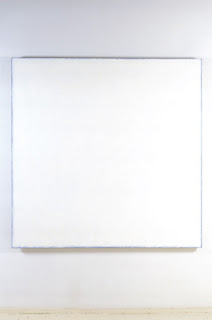 Of all the pigments - Chrome Yellow, Scheele's Green, Paris Green - that have been banned over the centuries, the color most missed by painters is likely Lead White.  This hue could capture and reflect a gleam of light like no other, though its production was anything but glamorous.  The 17th-century Dutch method for manufacturing the pigment involved layering cow and horse manure over lead and vinegar.  After three months in a sealed room, these materials would combine to create flakes of pure white.  While scientists in the late 19th century identified lead as poisonous, it wasn't until 1978 that the United States banned the production of lead white paint.  In this era, Robert Rauschenberg, Robert Ryman, and Agnes Martin turned to titanium and zinc whites to create monochromatic white paintings, while artists like Dan Flavin bypassed pigments altogether in sculptures that emitted white light directly.

- Sarah Gottesman
Posted by Georgina Kelman at 5:20 PM No comments:

I confess, one of my favorite things about art fairs, especially contemporary art fairs, is checking out the outfits worn by the other fair-goers.  Some, of course, are truly stylish and elegant, but many attendees seem to have a special wardrobe of "art fair clothes" that are more costumes than street wear.

So last Wednesday, when I arrived at the preview opening of FRIEZE New York, held under an enormous serpentine tent on Randall's Island, and was confronted by a group of young women looking like they had arrived from outer space I thought "Oh brother - this time they've really gone too far"! 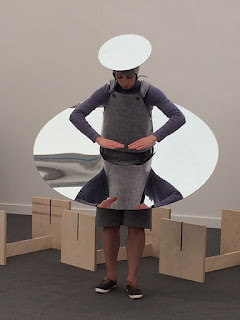 It wasn't until later that I realized that these grey clad Teletubbies were actually part of a performance piece called "Instruction from the Sky" by Edouardo Navarro.  Born in Buenos Aires in 1979, Mr. Navarro has been working as a sculptor, performance and installation artist since 2002.  Much of his work is New Age in feel with elements of science, medicine, archaeology and a healthy dose of spirituality in the mix. 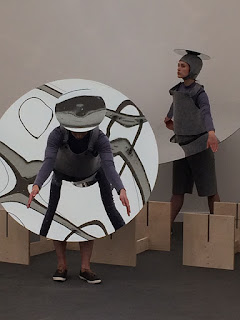 "Instruction from the Sky" is a meditative piece intended to offer alternative ways of seeing and experiencing the world.  Each performer wears a circular mirror "skirt" and "hat" that reflects the sky and the passing clouds. The unpredictability of the movement of the clouds informs the performers' own motions so that they, in effect, are traveling in sync with the sky. 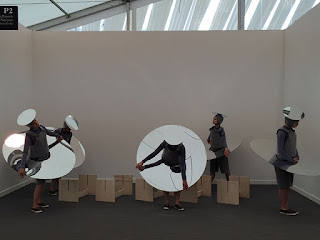 I am sure that this sounds a little "out there" but in fact it was not only beautiful but mesmerizing.  On closer examination, the odd looking outfits were reminiscent of some of the very earliest performance pieces - an updated version of the Bauhaus dances choreographed by Oskar Schlemmer, Paul Klee and Wassily Kandinsky. 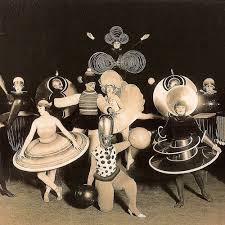 The moral of this story is, sometimes a costume really is a costume, and I have to remember to always keep an open mind!  These six women performed a serious and captivating expression of modern art, as beautiful as any ballet, and I was thrilled to have witnessed it! 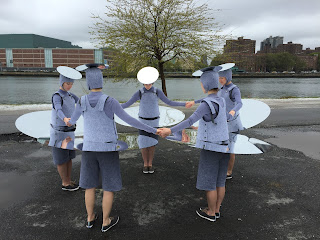 Posted by Georgina Kelman at 6:26 PM No comments: