A Visit to The New York Botanical Expo

It's been a long cold winter here in the Northeast, so when a friend suggested we get together to visit the New York Botanical Expo I jumped at the idea.  After all the grey and slush I was ready for some colorful blossoms and the illusion of a tropical paradise! 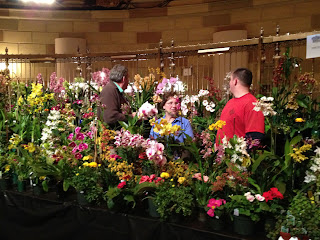 So last night we headed to Gotham Hall, an event facility in a former bank located in the heart of the garment district at 38th and Seventh Avenue.  Inside were thirty purveyors of exotic plants with a special emphasis on orchids, all gorgeous and all for sale. 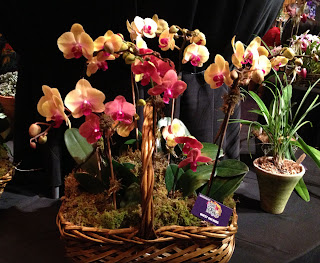 Now I'm not much of a green thumb, but I love orchids even if I can't grow them.  I think I really became intrigued with these marvelous flowers after reading Susan Orlean's 1998 bestseller "The Orchid Thief".  In it she investigates the arrest of plant dealer John Laroche and a group of Florida Seminoles for poaching a rare "Ghost Orchid" on the Fakahatchee Strand State Preserve.  What was so fascinating with this story was the devotion of these orchid collectors - as fervent a passion to possess a perfect or rare example as any art collector.  It was not just the hunt, it was the sheer pleasure of ownership that drove these devotees to break the law to acquire the perfect specimen.  But what makes orchid collecting different from art or coins or postage stamps, is that plants are living things and will not endure forever. 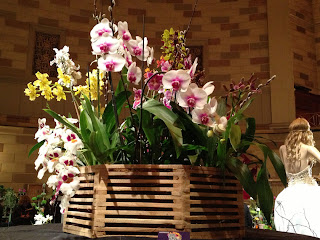 But back to "Blooms on Broadway".  This weekend, New Yorkers have the possibility to view over 500 varieties of rare, collectible plants from vendors as far away as Japan, Hawaii and Ecuador.  The public is also offered a chance to attend seminars and question and answer sessions with expert growers and it is a great opportunity to learn more about these exotic flowers. 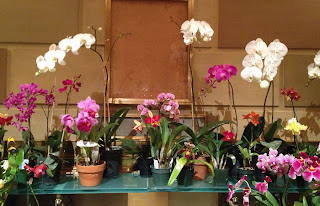 The abundance of these gorgeous blooms was overwhelming and despite my best intentions, I succumbed to their allure and did not leave empty handed.  As I stepped into the frigid night with my new blossom cradled and protected from the wind, spring didn't seem so far away after all! 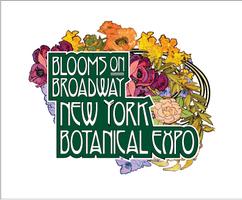 Posted by Georgina Kelman at 6:34 PM No comments:

"Drawing Surrealism" at The Morgan

When I think of The Morgan, my first thoughts are of J. Pierpont Morgan's fantastic collection of early books, including three Gutenberg Bibles, housed in his sumptuous study and library and surrounded by exquisite examples of Renaissance art.  So I was a little surprised when it was announced that they would be co-hosting an exhibition curated in conjunction with the Los Angles County Museum of Art and dedicated to Surrealist drawings.

All skepticism quickly disappeared when I went to see the show presented in two large galleries in The Morgan's new Renzo Piano designed exhibition space.  "Drawing Surrealism" is a chronological survey of Surrealist works on paper with thematic sections dedicated to various drawing techniques, the evolution of the movement and its international influence.  The exhibition presents 165 works by such masters as Salvador Dali, René Magrette, Joan Miro and Max Ernst, as well as many other unsung but still important artists of the period, drawn from major private and museum collections including quite a few from The Morgan's own reserves.

The Surrealist Movement, an offshoot of Dada, officially began in 1924 with the publication of André Breton's "Surrealist Manifesto" and continued as a major "ism" until the 1940s when it was overtaken by abstraction.  The tenets of Surrealism stem from Freud's theories of the unconscious, 19th century mysticism and Symbolist art and literature all of which emphasize dreams, chance and liberation of the mind.  The act of drawing was the perfect method with which to express spontaneous ideas and allowed artists unparalleled freedom to embody these thoughts through images.

The exhibition traces the evolution of the Surrealism through a variety of drawing techniques all seeking to achieve "pure psychic automatism".  One of the earliest expressions was through "automatic drawing" in which the artist simply allowed his or her hand to move across the sheet, but so quickly that it could not be guided by conscious thought.  "Dream imagery" was more academic in approach but allowed free-form imagination to create fantastic illusions while "vivid imagery" produced more grotesque and diabolical metamorphoses.  "Frottage", "fumage" and "decolomania" were three more methods that allowed the image to be determined by chance - frottage by using a pencil or charcoal to create a rubbing, fumage by holding a prepared canvas over the flame of a candle and allowing the smoke to create the image and decalomania entailed applying wet paint to a sheet of paper which was then pressed against another.  When the two sheets were pulled apart, the resulting pattern suggested the image. 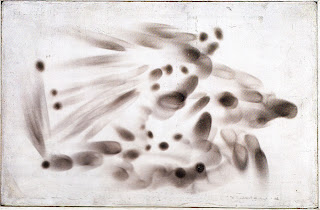 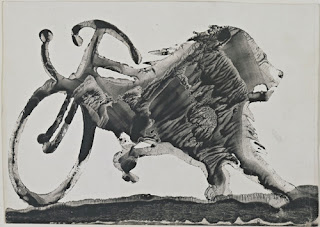 The Surrealists also played an art game called "exquisite corpse" that was the ultimate in chance and collaboration.  Here, several artists would each make a drawing on a section of folded paper without seeing the other drawings.  When the paper was unfolded to reveal the final product the effects were strange and wonderful at the same time!

While the exhibition's definition of a drawing may seem a little diluted with the inclusion of photographs, collages and watercolors, the overall impact is impressive and altogether it offers an informative perspective on Surrealist art.  I think Mr. Morgan would be pleased!
Posted by Georgina Kelman at 6:23 PM No comments:

When New York's Grand Central Terminal opened to the public on February 2, 1913, it was both an engineering marvel and an architectural masterpiece.  Constructed to house the state-of-the-art electrified trains running underground, the public space was designed to make people think they were in a cathedral.  It symbolized the golden era of transportation when long distance train travel was new-fashioned and luxurious and provided a suitably impressive and inspiring terminal for departing and arriving passengers.

With the decline in rail travel in the 1950s, the magnificent Grand Central began to lose its luster, and by the 1970s it had become dirty, dangerous and a place to be avoided.  In fact it was slated for demolition when, in a now legendary battle spearheaded by Jacqueline Kennedy Onassis, it was recognized as a landmark property and spared the wrecking ball.  What followed was a massive renovation project that began with fixing the leaking roof and eventually restored the entire edifice to its former Beaux Arts splendor. 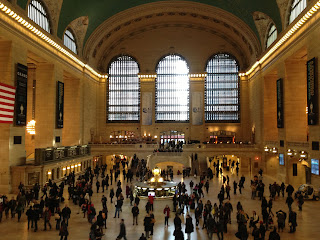 Today, the world's largest train terminal accommodates 750,000 regional commuters and 10,000 non-traveling visitors every day.  45 platforms service 63 tracks on which trains arrive and depart every 58 seconds during rush hour.  The building itself stands eight stories high and covers the area between Lexington and Madison Avenues from 42nd to 45th Streets with its subterranean footprint reaching up to 97th Street.  There are over 10,000 panes of glass filling the Main Concourse with natural light and illuminating the curious zodiac ceiling painted by French Belle Epoque artist Paul Helleu.  The 2,500 gold stars highlighting the constellations are actually backward, painted in reverse in a sort of "God's-eye view" of the heavens. 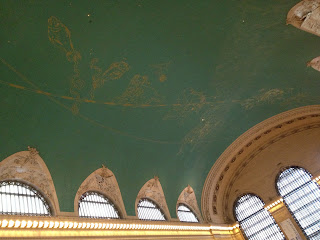 There are many interesting facts about Grand Central and some surprises too.  First of all, Grand Central is a Terminal, not a station.  Its subbasement is the deepest basement in New York City - more than ten stories below street level.  There is a secret side track, Track 61, that runs below Park Avenue to a special underground entrance to the Waldorf-Astoria Hotel initially used by President Franklin D. Roosevelt for privacy and security.  FDR's armored rail car is still parked beside the Waldorf's subterranean platform.  Another secret basement is not even recorded on the official blueprints - 130 feet below the Main Concourse is "M42" where the rotary converters that change A/C into D/C currents to power the rail lines are housed. 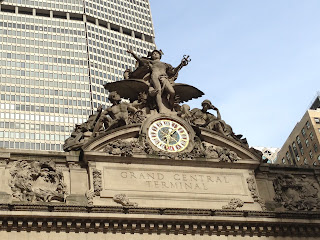 On a more decorative note, the magnificent stained glass clock that faces 42nd Street is the largest work of Tiffany glass in the world, thirteen feet in circumference and surrounded by giant sculptures of Minerva, Hercules and Mercury.  Inside, the signature round brass clock that anchors the information booth at the center of the Main Concourse, features four convex faces each made of opal and valued at $20 million!  This clock has been a meeting place for generations of New Yorkers and is now the symbol of the centennial. 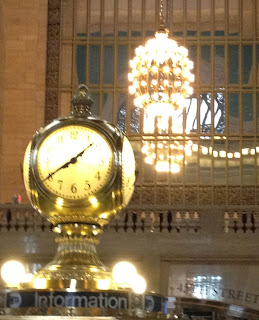 Grand Central is home to many stylish shops and restaurants but none is more famous than The Oyster Bar which has been in the same location since the Terminal opened.  Its vaulted ceilings with glazed tiles offer more than just charm - they also provide a "whispering gallery" an acoustical anomaly that allows even hushed conversations to be transmitted from one end of the restaurant to the other! 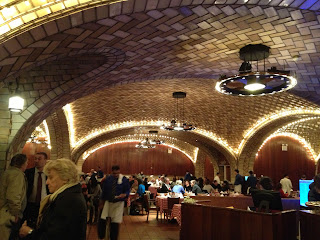 The Campbell Apartment on the balcony level was originally the private office and party pad, complete with wine cellar and pipe organ, of businessman John Campbell.  After his death in 1957 the apartment served as the Grand Central police station and since 1999 it has been returned to its former Neo-Florentine glory as an ultra chic lounge and bar.  But old habits die hard and there have been numerous reports of paranormal sightings as the ghosts of elegant ladies and gentleman appear and disappear with disturbing frequency. 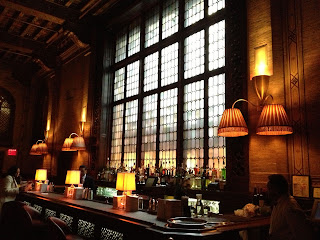 Perhaps one of the more romantic aspects of Grand Central involved the "Kissing Room", also known as the "Romeo and Juliet Gallery".  In the early 20th century public displays of affection were frowned upon and attendants were employed to monitor overly amorous activity in the Terminal.  However, there was special accommodation made for people departing on long distance trips, and later for wives and girlfriends of servicemen returning from World War II.  In a separate reception area officially called the Biltmore Room and located just off the Main Concourse, sweethearts could part and reunite with appropriate tenderness and a lingering kiss was not out of line.  Long out of use, the Biltmore Room will soon be rejuvenated as it is slated to become one of the main thoroughfares for the new Long Island Rail Road lines currently under construction.

I remember visiting Grand Central when I first moved to New York in the 1980s.  It was dark and dirty and filled with derelicts and I was amazed when older citizens would recall changing from work clothes to evening wear in the Terminal's spotlessly maintained ladies' and gentleman's lounges.  Then the transformation began and the dingy ceiling became a twinkling sky (with a small spot left untouched for comparison's sake), the marble returned to its creamy brightness and the brass chandeliers and fixtures regained their brilliance.  Grand Central became a symbol of the rebirth of the City itself and continues to be a source of inspiration and pride.  Happy Birthday Grand Central Terminal - here's to 100 more years of glory! 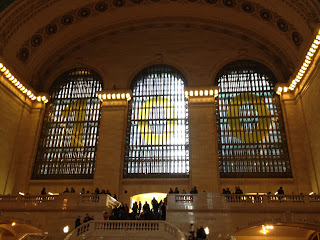 P.S.  It is sadly ironic that New York's most charismatic mayor, Ed Koch, another icon of the City's renewal, passed away on this very anniversary day.  He will be greatly missed.
Posted by Georgina Kelman at 3:18 PM No comments: