Feeling a little blue now that the holidays are really and truly over and it seems like an eternity before spring will arrive?  I know it's tempting to tuck up in a cosy apartment and read or watch Netflix, but you really will feel better if you get out and about.  Trust me.  And if you're in the New York this week, why not head over to the Park Avenue Armory and peruse the wonderful wares at the Winter Antiques Show?

Typically, the Winter Antiques Show is the first art fair in the calendar year and serves as the kick-off for the rest of the season.  To this end, the opening night party benefiting East Side House Settlement, is one of the most prominent events on the social agenda and with many famous faces from New York's haute monde in attendance.  Not being a member of the glitterati, I look forward to the quiet of a weekday afternoon when I can calmly look and ask questions and enjoy the beautifully decorated booths of the exhibitors.

This year I found the decor particularly fine with a focus on creating small stage sets that showcase the offerings rather than simply lining up the goods.  Like this presentation at Hyde Park Antiques, New York, with the lovely lavender/silver Chinoiserie wall covering setting off the fine Oriental inspired English furniture... 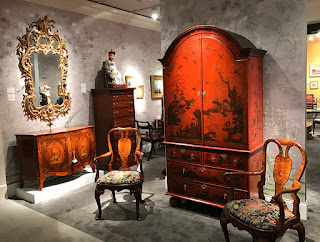 or this playful checkerboard of Chinese export porcelain at Cohen and Cohen, London... 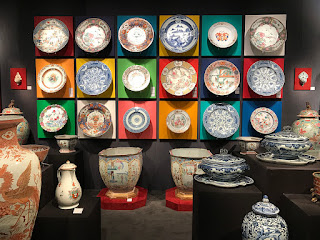 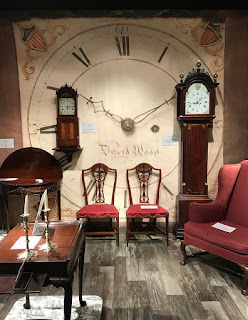 and the French antique wallpaper and Modernist furniture on the combined stand of Carolle Thibaut-Pomerantz, Paris, and David Gill, London... 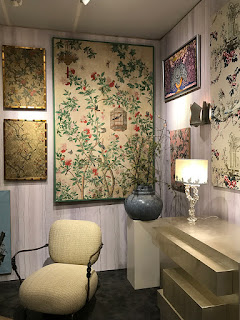 Of course there were many wonderful individual items as well.  These ranged from the exquisite, like this Art Nouveau table clock by Eugène Feuillatre on the stand of Wartski, London 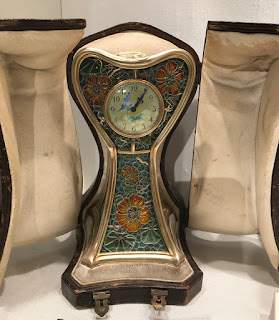 and this elaborately framed enamel on porcelain portrait miniature of Jane Seymour at Elle Shushan, Philadelphia... 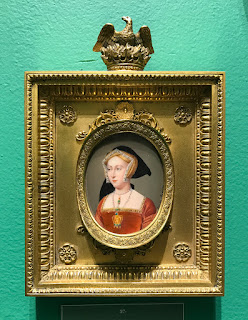 to the odd but fascinating, like the Fabergé potato at A La Vieille Russie, New York... 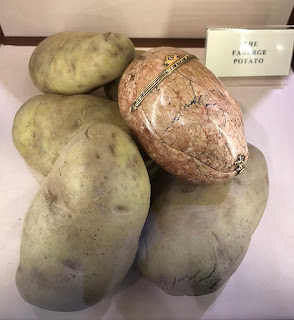 the Indian/Portuguese embroidered wall hanging of monkeys, created circa 1900 in Bengal at Keshishian, London and New York... 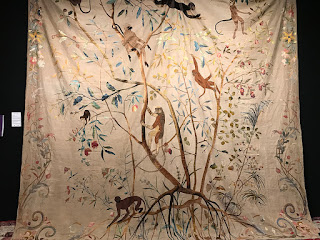 and the Buffalo Bill hat made in the late 1800s of turkey feathers, fur, horse hair, textile, metal, glass tin tinklers and mirrors that was found in the South of France but authenticated by the Buffalo Bill Museum on the stand of Gemini Antiques in Oldwick, NJ... 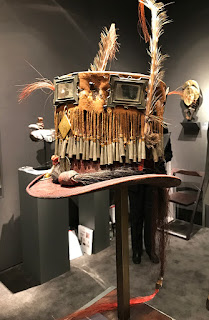 The Winter Antiques Show's strong suit has always been Americana, so I leave you with this photo of what I thought was a marvelous example of the genre - these beautifully installed military drums next to a cigar store Indian on the stand of Kelly Kinzle, Pennsylvania.  It's one of the many reasons that this show is now in its 63rd year and stronger than ever! 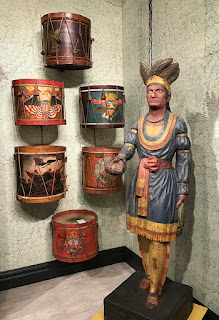 Posted by Georgina Kelman at 8:12 PM No comments:

A New Subway for a New Year!

New Yorkers had an extra special reason to celebrate this New Year's Day!  With well-deserved fanfare, the Second Avenue Subway was at long last opened to the public.  It's almost like the impossible dream come true as the project was decades in planning, years of construction, and billions of dollars in cost, but now the chronically delayed Q Train extension will finally carry passengers from Coney Island, Brooklyn, to 96th Street and Second Avenue in Manhattan.

And carry them in style!  Not only are the new subway tracks cushioned for comfort and quiet, but the subway stations are bright and clean and actually welcoming.  Adding to the amazement factor are the special art commissions decorating the new stations.  All the hoopla in the the press seemed too good to be true, so when I found myself on East 85th Street the other day I thought I'd better check it out for myself. 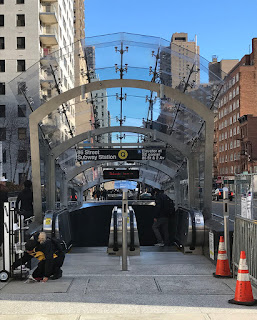 Now I've lived in New York for a long time and I do ride the subways when traveling longer distances, but I can't say I've ever really "enjoyed" the experience.  To say this was a pleasure may sound ludicrous, but that is indeed what it was. 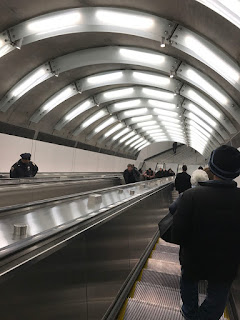 The new subway stations are two-tiered meaning that one does not descend directly onto the platform, but first to a mezzanine level, through the turnstiles, and then down again via escalators, elevators or stairs to the trains.  There was not a piece of trash or graffiti in sight, the equipment was all operational, there was a surfeit of uniformed personnel on hand and the trains ran on time!  But what was really remarkable, was the profusion of museum quality public art that decorated the tile walls. 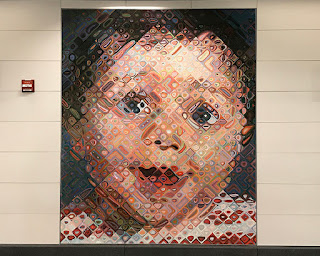 For example, the 86th Street Station features the work of Chuck Close (b. 1940), an artist known for large format portraits usually executed as paintings or photographs.  Here, his massive close ups are created using glass mosaic, some in color and some in black and white, and all are impressive. 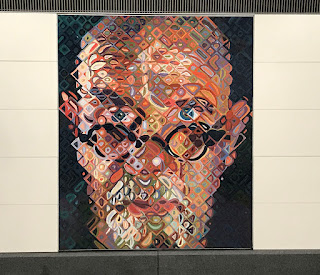 Uptown at 96th Street, the terminus (for now), the entire station is decorated in a blue and white mural by Sarah Sze (b. 1969).  "Blueprint for a Landscape" is an all-encompassing installation covering the ground and first levels, including the escalator tunnels. 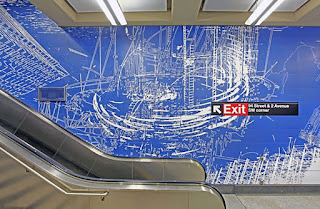 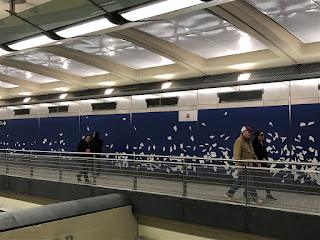 Heading back downtown, I stopped at the 72nd Street Station which is now populated with "Perfect Strangers", more than three dozen characters created in glass mosaic by Brazilian artist Vik Muniz (b. 1961).  A testament to the diversity of subway riders, there are people from all walks of life, like the businessman whose briefcase contents are flying in the wind... 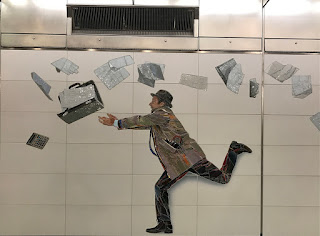 The lady in a sari checking her phone and the gentleman carrying home the ingredients for dinner... 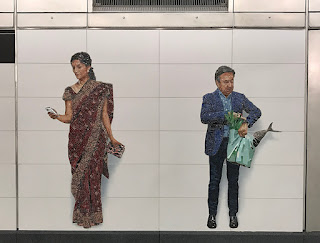 The father and his young daughter with their huge bouquet of balloons.. 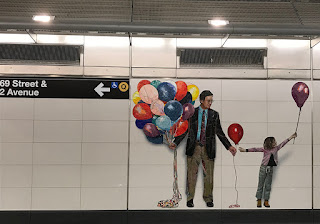 And the police officer enjoying an ice cream.. 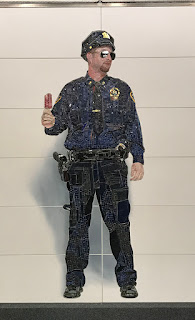 Each depiction is life-sized and according to the MTA website, is derived from a photograph of a real subway rider.

Finally we come to the newly re-constructed 63rd Street Station, where the new subway tunnel connects with the original Q line.  The art in the station is also a connection between old and new as "Elevations" by Korean-born Jean Shin (b. 1971) references the historical elevated subway lines but with a futuristic slant. 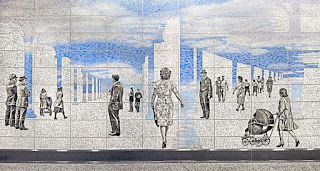 I still can't believe my own ears when I hear myself urging friends to take a ride on the Second Avenue Subway as a form of recreation, but it is true.  And I am certainly not alone.  For the first time in memory, the subway is a destination in itself with people taking photos and gleefully talking to fellow strap hangers.  How long this enthusiasm will last is anybody's guess, but for the time being, the new Second Avenue Subway is the talk of the town!
Posted by Georgina Kelman at 8:15 PM No comments: