Off to the Races! 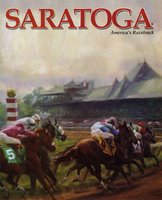 The end of July marks the beginning of the racing season at the legendary Saratoga Racetrack. For 36 days, this beautiful site is alive with the sights and sounds of thoroughbred racing on both dirt and turf tracks.

This year we had the great priviledge and pleasure to be invited to Opening Day of the 138th season. Decked out in the appropriate attire, including hats, we arrived at the historic clubhouse in time for the trumpet call to the post. Truly, the air was electric with excitement as thousands of spectators placed their bets and hoped their horse won!

In this age of "racinos" where one can wager in an air conditioned mega casino far from the actual track, there is no substitute for the real thing. The power and grace of the animals, the incomparable people watching and the thrill of the race itself, add an entirely different dimension to the experience. Even a non-gambler like me can have a heck of a lot of fun "playing the ponies" in this idyllic setting!

Our sincere thanks to Wendy and Morris Evans for their generous hospitality and for making this wonderful day possible.
Posted by Georgina Kelman at 5:09 PM No comments:

I had the incredible good fortune to be in Boston last week and to be able to visit the Museum of Fine Arts' current blockbuster exhibition "Americans in Paris 1860-1900". What a delight! Room after room filled with the most gorgeous paintings by American artists who had found inspiration in Second Empire Paris.

Americans have always had a love affair with Paris. For many Post Civil War artists, the lure of "Springtime in Paris" was irresistible. They came, they painted, they flourished and some of them stayed. Both men and women enjoyed the Bohemian atmosphere that encouraged creativity and expressions of beauty.

We are all the beneficiaries of this watershed period. From Whistler's iconic "Arrangement in Grey and Black, No. 1: Portrait of the Artist's Mother", to the splendidly decadent "Madame X" by John Singer Sargent there is something wonderful for everyone. From the blissful domestic scene in Mary Cassatt's "Mother and Child" to Winslow Homer's disturbing "A Summer Night" we are treated to a wide range of intimate glimpses into the private worlds of these artists. Filling in the All-Star list of American painters is a fine group of works by lesser known but extremely talented artists such as John White Alexander, Cecilia Beaux, Ellen Day Hale and Julius LeBlanc Stewart, to name just a few.

One particular favorite of mine was a group of seven postcard sized oil paintings by Maurice Prendergast. These Impressionistic depictions of figures in a variety of Parisian settings are absolutely exquisite.

If you can't make it to Boston to see this show, don't despair! The final venue is the Metropolitan Museum of Art in New York, starting in mid-October and running through January 2007. Please, make an effort to see this exhibition - you'll thank me!
Posted by Georgina Kelman at 5:56 PM No comments:

The High Style of Dorothy Draper

"Draperize" your summer and take a trip back to the 1930's and 40's with a visit to the Museum of the City of New York's current exhibition "The High Style of Dorothy Draper". The Museum, under the superb curatorship of Donald Albrecht, pays homage to this doyenne of style, the proto-Martha Stewart of her time, with a show that captures the flair and theatricality of this larger than life character.

Dorothy Tuckerman was born in 1889 to an excedingly wealthy and well connected family in Tuxedo Park, NY. In 1912 she married Dr. George (Dan) Draper and began to settle into a traditional, if priviledged, role as wife and homemaker. She was active in decorating her own homes, and she was often consulted by friends who sought her advice in home decor.

In the 1920's she contracted with the real estate magnate Douglas Elliman to design the lobbies of several exclusive Park and Fifth Avenue apartment buildings. One thing led to another and by the next decade she was decorating major public spaces like the reception area of the new and ultra chic Carlyle Hotel in New York City. As her reputation grew, her commissions expanded and she went on to design large commercial interiors such as the Fairmont Hotel in San Francisco, The Drake Hotel in Chicago, and her ultimate project, the Greenbrier Resort in White Sulphur Springs, WV. In every case, Dorothy Draper created a signature look of luxury and glamour down to the smallest detail.

By the 1940's the Dorothy Draper name had become so famous that she expanded her empire to making interior design more available to the public. In an effort to educate and liberate the Post World War II generation of American housewives, she published books like "Decorating is Fun!", created a line of household products, and designed the "Hawaiian Islands" group of wallpaper, textiles and furniture for F. Schumacher & Co, and Macy's Department Store. She wrote a syndicated decorating advice column entitled "Ask Dorothy Draper" that ran in 70 newspapers, 3 times a week. She decorated a fleet of airplanes and a Packard car.

Dorothy Draper was large in stature both physically and in her reputation. With no formal business or design education, but a formidable drive and imagination, she created a legend that is recognized to this day as the epitome of high style. Although upper crust in her upbringing, she democratized the rarefied world of interior design and gave ordinary people the confidence and the desire to "use decoration as a form of self-actualization". This wonderful exhibition highlights both her brilliant public spaces and her contribution to the American middle class home. It is a tribute to a true Original.
Posted by Georgina Kelman at 7:57 AM No comments: 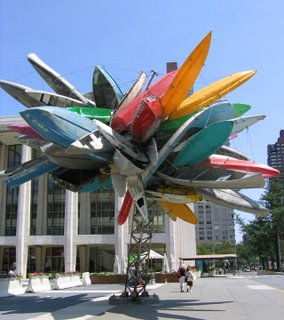 The Public Art Fund has sponsored a new temporary outdoor sculpture project that will grace Josie Robertson Plaza at Lincoln Center until the 4th of September. This year we are treated to "Big Pleasure Point" a huge and colorful assemblage by Nancy Rubin.

"Big Pleasure Point" comprises 60 rowboats, kayaks, surfboards, and other water craft, artfully welded and strung together with wire and perched about 20 feet above the astonished viewer. The title is derived from the words "Pleasure Point" stencilled on the side of several of the hulls from a Marina of the same name. From a distance it's hard to tell what it is, beside big, and as one comes closer one can only wonder at how on earth these boats got up there! It is a true engineering marvel and a feast for the eyes.

Ms. Rubin was born in Texas and now lives in Southern California. Her work is typified by a use of salvaged objects in incongruous ways that create a challenge to the viewers' commonly held expectations. In her hands, ordinary household goods become heroic, gravity defying almost alien forms forcing us to look at these simple things with new eyes.

This is Ms. Rubin's first project in New York and a wonderful complement to the outdoor scene at Lincoln Center. I hope we are graced with more of her amazing creations in summers to come.
Posted by Georgina Kelman at 12:53 PM No comments:

"Dada cannot live in New York. All New York is Dada, and will not tolerate a rival..."

So wrote Man Ray to Tristan Tzara in 1921. Today, in 2006, New York is being taken over by Dada in the form of a major retrospective of the Movement now on at the Museum of Modern Art. This is the last stop of a three city show that was 4 years in the planning and opened in Paris at the Centre Pompidou last October, then travelled to the National Gallery in Washington DC in February (see my blog of 2/16/06), and has finally arrived here.

As the wife of a devoted Dadaist and lender to the exhibitions, I have visited every show several times. Each venue was unique and each had its pros and cons. The debut in Paris was fabulous, almost overwhelming in its scope and volume. The brilliant installation and the comprehensive display covering every art form from sound poems to sculpture inundated the visitor with pure Dada. The move to Washington and the U.S. demanded a smaller show with less emphasis on the literary aspect of the Movement. The unexpected result of this editing was a far more aesthetic look to the works of art. This probably would have horrified the Dadaists, but it made for a nicer experience for today's museum goer. Now, in New York, the exhibition has changed again. A new space means a new look and with the addition of more print material from MoMA's own collection it is a little more well-rounded than Washington. However, despite the same great material and the fine installation, I felt the show had lost a little of its exuberance and joy. 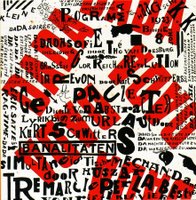 Dada is a little known movement but an important one. Begun as a reaction to the Establishment, World War I, and Classical Art, it rose meteorically and came to a sudden and definitive end with the Surrealist Manifesto of 1924. What it left behind is a huge œuvre of work including some of the the most revolutionary art of the 20th Century. Hausmann's "Mechanical Head", Kurt Schwitters' and Max Ernst's collages, Man Ray's "Rayographs"and Duchamp's "Ready Mades" (especially the infamous "Fountain/Urinal") are lasting reminders of this watershed period in art history. Hopefully shows like this one will awaken the public's interest and make people realize that the "avant garde" actually began almost a century ago. 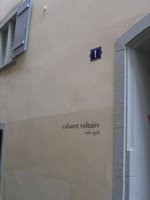 P.S. This is where it all began in 1916 at the Cabaret Voltaire in Zurich, Switzerland. We had the opportunity to visit the newly rennovated shrine two weeks ago. It had been saved from the wrecker's ball by the Swatch Corporation with the intention to make it into an artists' space where maybe the next Dada Movement could be born. While the ghosts of Hugo Ball and Emmy Hennings, Hans and Sophie Taeuber Arp, Tristan Tzara and Marcel Janco, certainly inhabit the premises, we can only hope that the current incarnation brings the spark of originality, creativity and, yes, revolution, that these stalwart souls embarked upon so many years ago. DADA Soulève Tout.

Posted by Georgina Kelman at 5:44 PM No comments: