"Sargent: Portraits of Artists and Friends"

Considered by many to be the greatest portrait painter of his time, the American artist John Singer Sargent (1856-1925) was never at a loss for commissions from wealthy and aristocratic patrons on both sides of the Atlantic.  Indeed, his portrayals of pillars of society, business tycoons and leaders of government are masterpieces of both technical proficiency and psychological depth and are prized works in important collections around the world.

Less well known but equally captivating are his non-commercial portraits, views of his friends and artistic colleagues painted with a certain familiarity and spontaneity as they worked and played.  For the first time ever, the Metropolitan Museum of Art has brought together ninety-two of these more private depictions in the exhibition "Sargent:  Portraits of Artists and Friends".

While these paintings and watercolors are every bit as masterful as his commercial works, they are somewhat more intimate and transparent and therefore a truer representation of the sitters.  For example, his view of the Belle Epoque artist Paul Helleu painting en plein-air while his wife reclines by the side of a red canoe, is a study of a colleague at work... 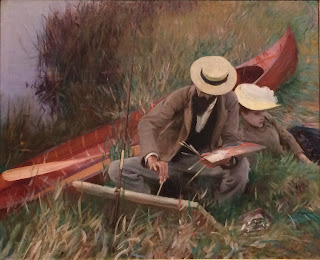 And this pose of the writer Robert Louis Stevenson, wasted with tuberculosis but with a nervous energy radiating from his painfully thin body... 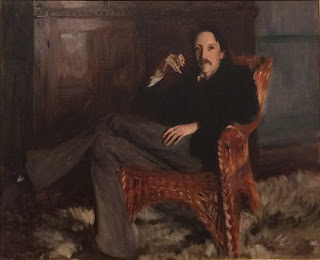 Or this informal portrait of the businessman and philanthropist Charles Deering relaxing at his home in Brickell Point, near Miami, Florida.  Sargent's loose brushstrokes convey the brilliant white sunshine enveloping his elderly friend and patron as he sits among the palm fronds... 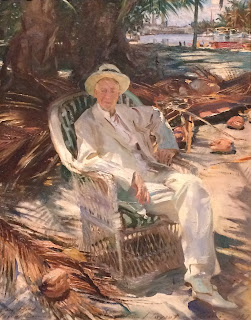 Even his more composed portraits of his friends possess a special intimacy.  Take, for example, this magnificent, life size pose of Mrs. Hugh Hammersley resplendent in a cerise velvet gown while sitting on a satin covered settee.  Despite the formality of the dress and the interior, the sitter is perched in a casual posture and with a warm and friendly expression on her lovely face... 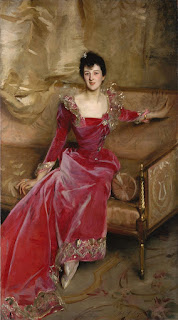 Likewise, this impressive representation of Sargent's friend and fellow painter William Merritt Chase shows reflects his imposing and engaging personality.  The story goes that Chase arrived at Sargent's London studio with both his working attire (in which he was painted) and a more formal frock coat (which Chase preferred).  Nevertheless, the painted likeness captures both the artist and the gentleman of Chase's exuberant persona... 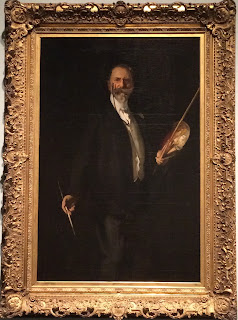 This exhibition is enhanced with a gallery devoted to works on paper, especially Sargent's wonderful watercolors but with a few lovely drawings included as well.  Again, Sargent proves to be a master of not only the medium, but of capturing the more intimate expressions of his friends as he paints them.  In this watercolor view of Venice we find the artists Wilfred and Jane de Glehn enjoying a gondola ride on their honeymoon.  While Wilfred sketches beneath a canopy, his new bride watches his work and Sargent captures the moment from a second, separate gondola whose bow can be seen in the lower left corner of the composition... 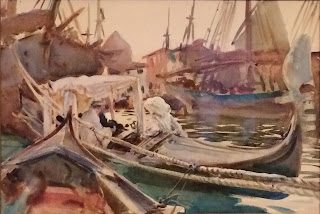 Any exhibition of works by John Singer Sargent is bound to be fantastic, but this one has a very special appeal.  Far more than simply renderings of famous or wealthy people, these are character studies executed by paintbrush - intimate, witty, penetrating and frank - testaments to true friendship and artistic genius.
Posted by Georgina Kelman at 2:28 PM No comments:

A Visit to the Denver Art Museum

With apologies to my loyal readers for the long hiatus, I am back with a new crop of blog topics that I hope will make up for the wait!

I'll start with my recent visit to the Mile High City and its wonderful art museum.  I had never visited the Denver Art Museum but knew its reputation for having one of the biggest collections between Chicago and the West Coast.  Founded in 1893 as the Denver Artists' Club, the museum is now housed in two connected buildings each a distinct design by a noted architect.  The North Building was opened in 1971 as a seven story structure with over a million reflective glass tiles on the exterior of its twenty four sides.  Thirty five years later the museum greatly expanded its exhibition space with the Hamilton Building designed by Daniel Libeskind who took his inspiration from the jagged peaks of the Rocky Mountains nearby. 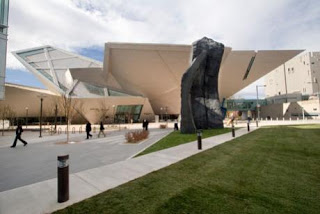 I started my tour at the top of the North Building where, punctuated with magnificent views of the City of Denver and the Statehouse, I found an amazing collection of Western Art.  Paintings of classic views of the western plains and desert, cowboys and horses, Indians and pioneers were interspersed with fabulous bronze sculptures and a collection of artifacts reflecting the early settlers and development of the region. 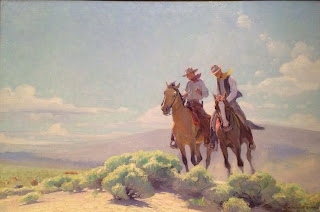 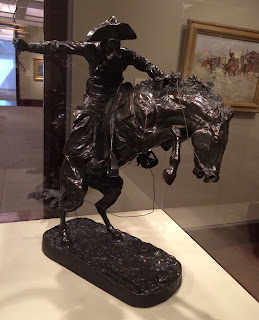 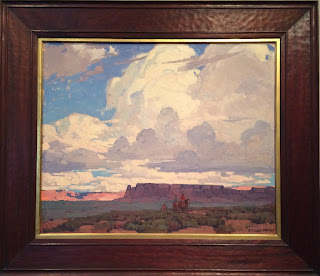 As I descended from floor to floor, the depth of the Museum's collection became more and more apparent.  Decorative arts, including furniture and textiles, Spanish Colonial, Pre-Columbian, European and American Masters were all represented with exquisite examples. 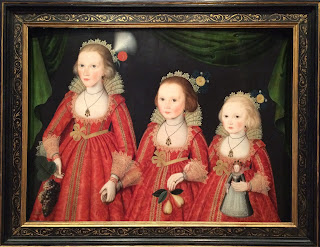 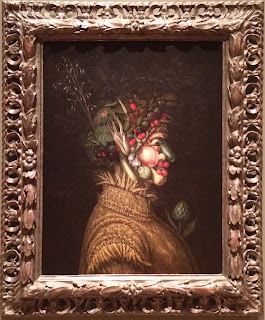 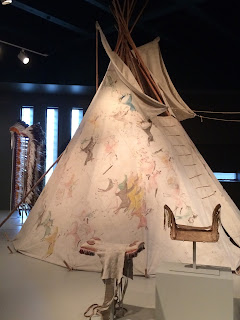 Sioux tipi with saddles and a Chief's headdress, Late 1800s

Across the walkway in the Hamilton Building was a special exhibition entitled "In Bloom:  Painting Flowers in the Age of Impressionism".  As you can imagine, it was a feast for the eyes!  Beginning with the luscious roses of Pierre-Joseph Redouté and continuing through to Matisse's Modern still lifes, this exhibition explores the history of Franco-Flemish flower paintings from the 19th to the 20th centuries. 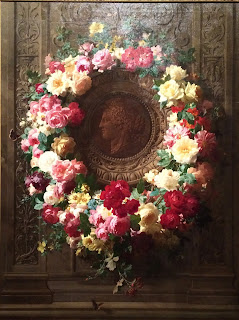 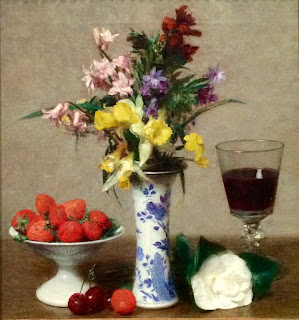 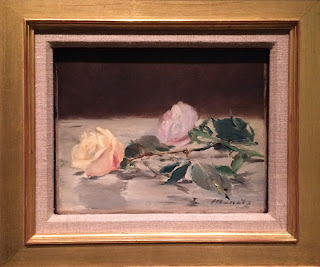 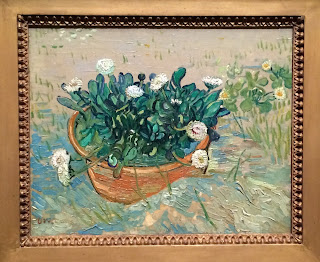 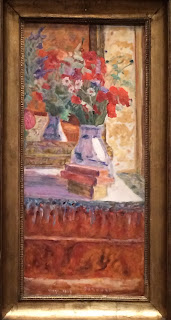 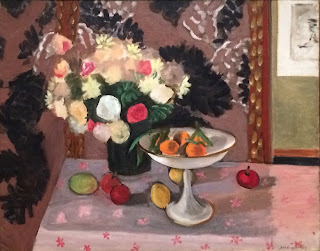 I'm afraid I got a little carried away with the photographs, but the paintings were so beautiful it was hard to stop!  More importantly, I hope they convey the evolution of the flower painting genre from botanical illustration to modernist interpretation.

If you're ever in the neighborhood, a visit to the Denver Art Museum is a celebration of the spirit of the West and a most enjoyable prelude to the natural beauty of the spectacular Rocky Mountains.
Posted by Georgina Kelman at 2:26 PM No comments: