Contemporary art lovers are in their element this weekend as New York City hosts a marathon of art fairs dedicated to new and emerging artists. SCOPE, Bridge, Red Dot, PULSE, Art Now and L.A. Art are all part of the "New York Art Weekend", a sort of mini-Art Basel that runs through March 30 at various venues throughout the city.

The main event is The Armory Show, a tribute to the famous 1913 Armory Show where Marcel Duchamp's "Nude Descending a Staircase" made it's shocking debut. The 2008 version is huge - over 150 exhibitors from around the world installed on Pier 94 on the Hudson River. Collectors, museum curators, art advisers, artists, dealers and art world wannabes of all types, dressed to be noticed and all having cell phone conversations of the "utmost" importance, mob the stands and the aisles in the quest to find the next hot star. But one nagging little question, that started as a whisper and is now growing into more of a growl, remains - is this really art?

I hate to sound like some fuddy-duddy who looks at a Picasso sketch and says "My 6 year old grandson could have drawn that". I try to keep an open mind and appreciate a fine technique, a clever idea, a philosophical statement or simply a beautiful object. But I'm starting to have my doubts. Let me show you a few examples from today's visit: 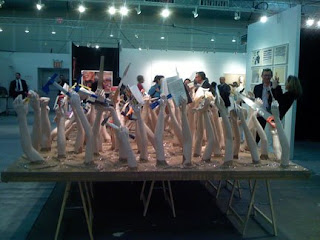 This installation by Thomas Hirschhorn is entitled "Tool Table", done in 2007. It is comprised of dozens of mannequin limbs fastened onto a sheet of wood which is covered in shiny brown tape, set up as a table on saw horses. Each hand or foot has a book or a tool scotch taped onto it. It is on the stand of Arndt & Partner, Berlin. 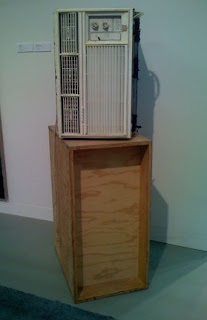 A sculpture by Tom Sachs called "Friedrich Powermiser", 2006, is a life size wooden re-construction of a window air conditioner on a plywood box base. This can be found at Galerie Thaddeus Ropac of Salzburg, Austria, and New York. 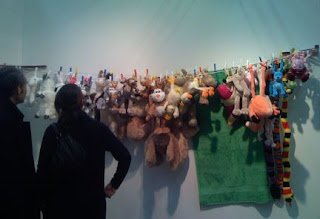 Finally, my personal favorite, an installation consisting of several rows of clothesline affixed to a wall with brackets. On these clotheslines is a collection of stuffed toys and a bath towel hanging by plastic clothespins. This "masterpiece" is called "Marathon", 2007, by Cosima Von Bonin and is presented by Friedrich Petzel Gallery in New York.

The art world often seems to operate in a different galaxy than the rest of us, and maybe I just don't "get it", but I am afraid that the contemporary art boom is about to have a reality check.
Posted by Georgina Kelman at 5:02 PM No comments:

Gustave Courbet at the Met 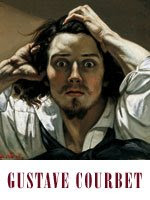 When an artist proclaims himself to be the "Proudest and most arrogant man in France" you figure he's got something to say, and until May 18th at the Metropolitan Museum of Art, you can see for yourself what made Gustave Courbet utter this statement

Gustave Courbet (1819-1877) was no stranger to scandal or controversy. Of course most of it was self-generated and only served to heighten his allure. Beginning with his "Realist Manifesto" in which he declared his objective "to be in a position to translate the customs, the ideas, the appearance of my epoch, according to my own estimation", Courbet set out to turn the art world upside down with his fresh and radical philosophy.

Now considered a proto-modernist, Courbet's novel approach to painting included portraits and nudes that were true to the sitter - flaws and all, landscapes and genre scenes from his native Ornans that showed how people really, truly lived - without embellishment, and over 20 self-portraits that depicted the artist in various costumes and emotional states from pensive to desperate (see the illustration).

Courbet drew his inspiration from the great masters such as Titian and Rembrandt, and also from the relatively new medium of photography, an aesthetic that bridged the gap between painting and real life and promoted his ideals of Realism. His work in turn had a significant impact on the Impressionists such as Monet and Manet, and Modern artists such as Balthus and Cézanne. His political activities (he was a well known Socialist and supporter of the Paris Commune of 1871) eventually forced him to move to Switzerland where he ended his days painting mundane scenes of the Alps and Lac Lemans - an ignominious end for this trail blazer of 19th Century art.
Posted by Georgina Kelman at 11:47 AM No comments:

Mary Rogers was, by all accounts, a very beautiful young woman whose battered body was found floating in the Hudson River on July 28, 1841. The subsequent investigation into her violent demise has been the stuff of legend, and although many have tried, including, most famously, Edgar Allan Poe, the murder has never been solved.

It's an intriguing story, and a recent book by Edgar Award-winning author Daniel Stashower is a fresh and compelling account of a crime that riveted New Yorkers for years. "The Beautiful Cigar Girl - Mary Rogers, Edgar Allan Poe and The Invention of Murder" is a both a fascinating look at 19th Century New York City and a biography of one of America's greatest mystery writers Edgar Allan Poe (1809-1839). 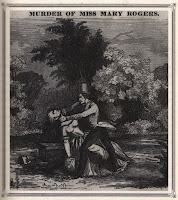 They say that the "Truth is stranger than Fiction" and that is indeed the case here. The lovely Miss Mary Cecilia Rogers lived with her mother and worked behind the counter of John Anderson's Tobacco Emporium on lower Broadway. Miss Rogers was the object of affection for many customers but by all accounts maintained a professional distance with both her employer and her clients. It was a surprise then when she went missing one July afternoon after having told contrasting stories to her family and friends, and finally ended up dead and floating in the river off Hoboken, New Jersey.

A string of delays, compounded by the July heat, resulted in the body not being examined in a timely or thorough manner and consequently the autopsy was inconclusive. This did not stop the press from sensationalizing every detail, real or imagined, or offering wild speculation into the reason and possible guilty parties. However, after a year with no concrete results the public's interest in the lurid exploitation had begun to wane. 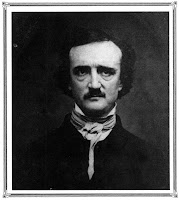 Enter Edgar Allan Poe. In 1842, Mr Poe was 31 years old and despite the initial success of his detective story "The Murders in the Rue Morgue", he was in a downward spiral professionally, personally and financially. His family relations were in tatters, his military career a disaster, his fondness for the bottle legendary and he was regularly fired from every writing post he held. In a desperate attempt to salvage his reputation as an author, and to earn some much needed cash, he proposed a three part series to be published in Ladies' Companion magazine, that would solve the murder of Mary Rogers. "The Mystery of Marie Rogêt" was Poe's entry into the fray of competing stories proposing a solution to this baffling crime. Although his research was remarkably thorough and his conclusion viable, it came a little too late and not quite solid enough to be considered the absolute answer. His effort did not succeed in resurrecting his career or his situation and he continued to deteriorate until his death, under unclear circumstances, a few years later.

"The Beautiful Cigar Girl" is true story that reads like a novel. We may never know what terrible fate befell Miss Mary Rogers, but this well-researched and engaging book will captivate readers of New York City lore and mystery thrillers alike.
Posted by Georgina Kelman at 12:12 PM No comments: 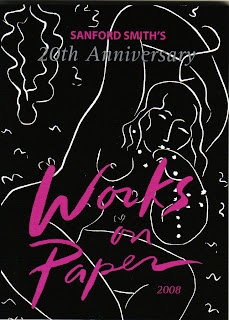 I'm dating myself when I tell you I can't believe Works on Paper is celebrating its 20th Anniversary already! I remember when it started off and they were giving away tickets to the opening night. Now, the preview is a fancy benefit and tickets are expensive and hard to come by. The reason is simple, it's a very accessible show with something for every taste and budget.

As the name implies, Works on Paper is devoted to art created on paper - prints, drawings, photographs, posters and watercolors - from Old Masters through Contemporary art. This year's 78 exhibitors come from the United States, Britain, France, Holland, Spain, Germany and Belgium and the variety of works exhibited is extensive. As with many art fairs in recent years, the emphasis is more modern and contemporary than traditional, but devotées of the 19th Century and before will not be disappointed.

Kudos to Sanford Smith and his team for creating and developing this fair from an idea to an annual highlight in the art world calendar! Works on Paper '08 runs until 5 o'clock Monday afternoon.
Posted by Georgina Kelman at 12:16 PM No comments: