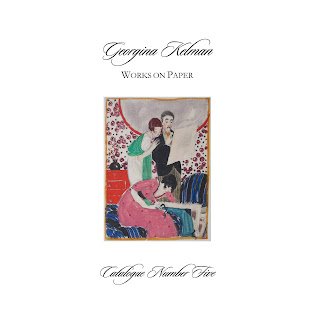 I am pleased to announce the publication of my fifth catalogue!

Georgina Kelman :: Works on Paper presents "Catalogue Number Five", a selection of European and American fine prints, drawings and watercolors from the Victorian Era to the Jazz Age. As with the previous editions, this catalogue offers works by such 19th and early 20th Century artists as Bérard, Chahine, Degas, Helleu, Lepape, Steinlen, Villion and Tissot plus a few undiscovered genius'! This is a labor of love, and I hope you enjoy browsing the collection.

Many of these pieces, plus a lot more, can be viewed on my website, www.GeorginaKelman.com. If you would like to know more about the catalogue or have any specific art requests, you can contact me directly from the site.

Summer is quickly becoming a faded memory, but we have the new fall season to look forward to! Please check back often as I share my art adventures on this blog. Thank you for visiting and hope to see you soon!
Posted by Georgina Kelman at 5:57 PM No comments:

A Visit to the McMichael Canadian Art Collection

In the 1950's, the village of Kleinburg, Ontario, was little more than a pinpoint on the map just to the north and west of Toronto. Today, thanks to the passion and foresight of Robert and Signe McMichael, Kleinburg is known far and wide as the home of the McMichael Canadian Art Collection - the spiritual home of the renowned Group of Seven.
Let's begin at the beginning. In the early part of the twentieth century, a group of artists began working together in an effort to forge a Canadian painting identity using the nation's unique and magnificent landscape as an inspiration. It was, in their eyes, time to break away from their European roots and create a school or movement that reflected the reality of the new country and its intrepid inhabitants. 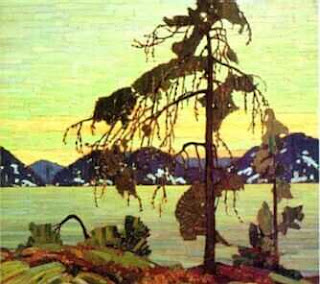 Tom Thompson "The Jack Pine", 1917
The "godfather" of this group was Tom Thompson, an outdoorsman at heart who recorded his observations of nature in his brilliantly colored paintings. It was his connection to and influence on other similarly minded painters that resulted in the formation of the Group of Seven - a name that eventually became a misnomer as the group expanded to ten! Sadly, Tom Thompson died in a canoeing accident before the Group of Seven was officially founded, but his vision was their guide throughout their existence. 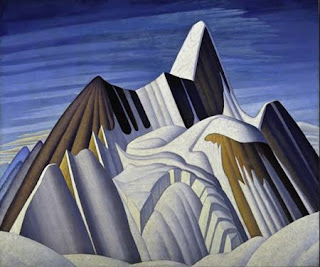 Lawren Harris "Mount Robson", c. 1929
In 1920 the seven artists comprised Lawren Harris, J.E.H. MacDonald, Arthur Lismer, Frederick Varley, Frank Johnston, Franklyn Carmichael and A.Y. Jackson. Their first exhibition at the Art Gallery of Toronto was an immediate success and confirmed their commitment to exploring and depicting their native environs. Over the next few years the group incorporated three more official members, A.J. Casson, Edwin Holgate and L.L. FitzGerald, and is also credited with influencing contemporaries - most notably Emily Carr. By 1931 the Group of Seven had given its last show - they disbanded and continued to pursue their art on individual basis' but their impact on Canadian Art did not wane.
Now let's skip ahead twenty years when art collectors Robert and Signe McMichael purchased a tract of land in Kleinburg and built a large log cabin which they named "Tapawingo", or "Place of Joy". Here they displayed their beautiful paintings surrounded by the nature which inspired them. Not just patrons of the Group of Seven, the McMichaels took personal interest in the well-being of the surviving members. In fact, A.Y. Jackson spent his last years with them and is buried on the grounds along with five of his colleagues in the McMichael Cemetery. 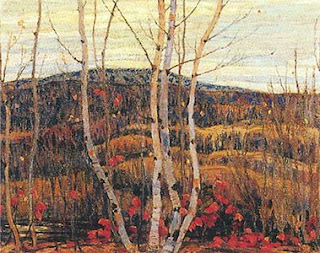 A.Y. Jackson "Maple and Birches", 1915
Both the acreage of the property and the square footage of the home were expanded over the years as their collection grew and the number of art lovers who made the trek to visit them increased exponentially. Eventually, in 1965, the McMichaels donated the land, their home and its contents to the Province of Ontario which maintains the compound to this day as a museum and cultural center dedicated to the promotion of the Canadian identity through art. Today, visitors can enjoy walks through the woods, a look at Tom Thompson's very primitive painting cabin (moved there from its original location), temporary exhibitions focusing on Native arts and artists, and most of all, the installation of the McMichael's own personal collection of the Group of Seven within the log walls of their home.
The McMichael Canadian Art Collection is open 364 days a year for the pure pleasure of viewing these magnificent works of Canadian art.
Posted by Georgina Kelman at 3:14 PM No comments:

A Visit to the Land of "Anne"

The tiny Canadian province of Prince Edward Island is known for red sand beaches, delicious seafood and for hosting the 1864 Charlottetown Conference that led to Confederation and the Dominion of Canada three years later. But most of all, it is famous for the fictional red haired orphan known around the world as "Anne of Green Gables".

After the near record breaking heat in New York this summer, I decided that a little break to cool off and chill out was in order and what better place than the shores of P.E.I. This was not my first trip to the Island - it was my family's regular holiday destination when I was growing up - but it had been several years since my last visit. Fortunately some things never change and though a few more of the red dirt roads had been covered with pavement, the pristine, pastoral beauty was the same. The late August days were warm with a gentle sea breeze and perfect for touring or walking the beach with the promise of a scrumptious lobster dinner to follow.

But what about Anne-Spelled-With-An-"E"? Who could have imagined when Lucy Maud Montgomery's novel was published in 1908 that her heroine would achieve international fame with a movie, a long running musical, a tv miniseries, countless licensed products and an industry unto her (fictional) self? I dare say that Anne Shirley is as closely associated with Prince Edward Island as a certain jolly old elf is with the North Pole - and probably a whole lot more lucrative for the residents!

For anyone unfamiliar with the story, an elderly brother and sister living in the fictional community of Avonlea are hoping to adopt a boy to help them on the farm but through a twist of fate they receive a girl instead. Not just any girl, but a scrawny, freckled, totally un-tamed red head with a wild imagination who clearly needs them as much as they discover they need her. Anne Shirley slowly captures the hearts of Matthew and Marilla Cuthbert and turns the house of "Green Gables" into a home. Subsequent novels follow Anne as she goes to college in Halifax and returns to the Island as a teacher, marries her former tormentor Gilbert Blythe, and becomes a mother. All of this is pretty tame by today's standards, but given the setting and the epoque, it was quite a remarkable story indeed and told with extraordinary charm. 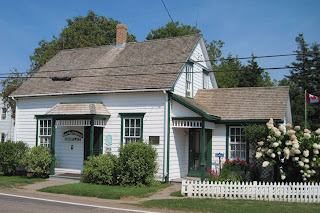 Lucy Maud Montgomery's birthplace
New London, P.E.I.
Many people believe that the story of Anne is an autobiography, and while there are some striking similarities, it is a work of fiction based upon her childhood and the environs in which she was raised. Lucy Maud Montgomery was born in a little clapboard house in Clifton, now New London, Prince Edward Island, in 1874. Her mother died of tuberculosis when Maud was a baby and her father gave custody of his only child to her maternal grandparents, the Macneills, in the nearby town of Cavendish and he later relocated to the prairie province of Saskatchewan. Maud's childhood was a lonesome one but visits to her cousins in Park Corner and her fertile imagination made the grim situation bearable. She amused herself with writing and her early poems were published in the local paper. She attended Prince of Wales College in Charlottetown where she received a teaching certificate and taught school for several years. In an exceptionally plucky move for a woman at that time, Maud Montgomery took a leave of absence to study English literature at Dalhousie University in Halifax, Nova Scotia, before returning to the Island.

The death of her grandfather Macneill in 1898 left her virtually hostage in the family home as caregiver to her widowed grandmother. Through the 13 years that followed she supplemented their income with the sale of poems and stories to various magazines and newspapers and in 1903 earned the tidy sum of $500 from her "scribbling". The publication of "Anne of Green Gables" in 1908 brought both financial and critical success and paved the way for her continued writing. 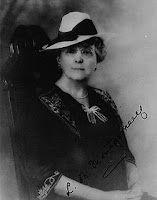 When Grandmother Macneill passed away in 1911, Maud was finally free to marry though by that time her quest for "romantic love" had dimmed. Despite several flirtations and marriage proposals she settled for what she thought would be a steady if boring arrangement with Ewan Macdonald, a Presbyterian minister. The couple moved to Leaksdale, Ontario, where they lived in the Manse and she bore three sons, two of whom survived. It was here that she discovered that her husband suffered from acute depression, a religious melancholia that haunted them throughout their married life. Although Maud Montgomery Macdonald continued to write and express her love of life, nature and beauty in her fiction, she never again lived on her beloved Prince Edward Island.

Lucy Maud Montgomery published over 20 novels, 500 short stories, an autobiography and a book of poetry. She was the first woman in Canada to be named a Fellow of the Royal Society of Arts in England and was invested in The Order of the British Empire in 1935. Like her heroine Anne she overcame adversity with a brilliant imagination and love of writing and defied custom by seeking a higher education and becoming self sufficient. She has achieved iconic status as a Canadian writer and a feminist and her work continues to be published and studied by scholars everywhere. The immortal "Green Gables" is now a National Historic Site visited by thousands of pilgrims annually and Anne lives forever in the hearts of legions of fans, myself included, captivated by the charm of this spunky red headed orphan!
Posted by Georgina Kelman at 2:17 PM No comments: