It has been hotter than Hades here in New York City so when the possibility of a quick trip to Boston came up I thought "why not?"  Friends had recommended the Bolt Bus service as a safe, comfortable and very economical mode of transportation so Friday morning I took off with a sandwich, a book and my iPhone and rode the Bolt up North to Beantown!

One of my objectives for the trip was to visit the now not-so-new Art of the Americas Wing of the Museum of Fine Arts Boston which had been under construction during my last visit in 2008.  Designed by the London architecture firm of Foster & Partners, the expansion increased the museum's exhibition space by half and provided a new home for their collections from North, Central and South America. 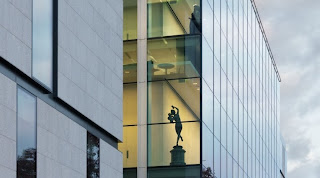 I guess I am an old fogey in a lot of ways but I tend to like things the way they were.  I loved the old MFA with its classical building and traditional approach to installing and presenting art.  While the new addition is not as grating as the Renzo Piano re-make of the Morgan Library here in New York, it is all about the building and not about the art.  For example, what had been a very nice courtyard is now a soaring atrium - four stories of glass with a restaurant on the ground floor - with the only art on display being two new commissioned sculptures that can withstand the intense sunlight beating through the windows.

But I digress.  The Art of the Americas Wing also comprises four levels of galleries arranged chronologically from ancient American, Native American, and 17th Century art on the lowest level to 20th Century art on the top floor.  Here, displayed in 53 new galleries, are 5,000 works of art from the museum's extensive collection covering 3,000 years of North American culture.  Not everything is a masterpiece, but the MFA does own some magnificent pieces and I was very happy to see John Singer Sargent's "The Daughters of Edward Darley Boit", 1882, occupying a suitably important location on Level 2. 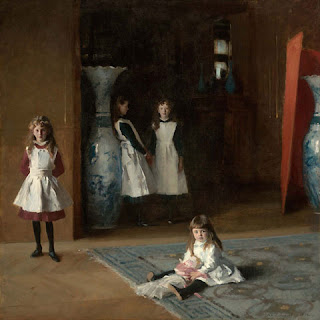 Also very enjoyable were several small but worthwhile exhibitions presented in corridors or galleries leading to bigger shows.  I particularly liked "Manet in Black", a group of 50 prints and drawings on a variety of subjects that clearly demonstrated Manet's mastery of the use that color.  I also enjoyed "Paper Zoo", featuring prints, drawings and photographs of animals, birds and sea creatures by artists ranging from Dürer to Audubon to Picasso.  Edward Weston's photographs of urban American landscapes taken during a cross-country road trip in 1941 with the purpose of illustrating a deluxe edition of Walt Whitman's "Leaves of Grass" was fascinating.  And my Canadian heritage cannot be denied - I loved the presentation of photographer Yousof Karsh's portraits of Queen Elizabeth II in honor of her Diamond Jubilee!

It was great fun to be back in Boston, even for a short visit, and I hope to be able to Bolt back very soon again!
Posted by Georgina Kelman at 6:08 PM No comments:

Despite the really chilly and wet weather in Paris there was plenty to see and do.  I've already mentioned some of the highlights but there were several smaller exhibitions that were just terrific too.

Let's start in the middle and visit The Louvre where a very special presentation is in its last days.  Considered his "ultimate masterpiece", Leonardo da Vinci labored over his painting "The Virgin and Child with Saint Anne" for the last twenty years of his life, leaving it still unfinished at the time of his death in 1519.  To celebrate the recent cleaning and restoration of this magnificent picture, The Louvre has put together a special exhibition comprising a large number of Leonardo's preparatory drawings (many of which are on loan from the private collection of Her Majesty Queen Elizabeth II), paintings by Leonardo "wanna-be's", paintings by more recent artists who were influenced by this one, and, the star of the show, "Saint Anne" herself.

"The Virgin and Child with Saint Anne" may not be as famous as Leonardo's "Mona Lisa" which also hangs at The Louvre, but it is equally impressive and probably a more ambitious work.  Obsessed with the correct depiction of Mary, mother of Jesus, her mother, Saint Anne, and the Christ Child playing with a lamb, Leonardo sketched and painted various interpretations of the scene over the course of years.  This final result is a tender portrayal of maternal love and the desire to protect one's child yet allowing him freedom executed with a tenderness and certain sadness as Mary realizes that this gentle lamb actually represents her son's impending sacrifice.

There has been a lot of controversy over the restoration and cleaning of this painting with some scholars claiming that the colors are now too bright and it looks too fresh.  I, for one, found it breathtaking and was very happy to be able to see the newly discovered sketches on the back of the board that will not be viewable by the public once the painting goes back to its usual spot in the museum.  It requires a very special work to warrant a solo exhibition but Leonardo da Vinci's "The Virgin and Child with Saint Anne" certainly deserved the honor. 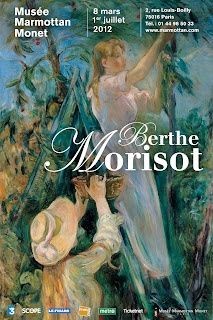 Now let's move over to the XVI ième arrondissement and the beautiful Musée Marmottan where an impressive display of works by Berthe Morisot is currently on view.  The museum is housed in a former hunting pavilion turned repository for several important collections of Impressionist paintings, including major holdings of works by Claude Monet, as well as the Wildenstein bequest of illuminated manuscripts.

Berthe Morisot (1841-1895) was one of very few serious women painters in her time and one of even fewer to be publicly recognized to the extent of inclusion in the Impressionist Exhibitions.  This show traces her artistic career from childhood painting lessons, her initial meeting with Edouard Manet who used her as a model and introduced her to his painter friends, her marriage to Edouard's brother Eugène Manet and the birth of their daughter Julie who became her favorite subject.  Through all these phases, Berthe continued to paint - much against bourgeois convention of the time.  She was a true working mother and a full fledged artist who happened to be a woman but achieved the recognition of her peers and inspired some of the great names of the day.

Progressing from portraits to landscapes painted out-of-doors (a radical concept at the time) to large scale compositions, Morisot painted with a loose brushstroke and luminous color and light typical of the Impressionist aesthetic.  While some of her imagery may be a little sentimental for this modern world, she exquisitely captured moments of domestic bliss that are still very beautiful and allow us a moment to step back to a simpler time. 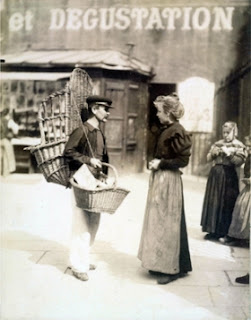 Finally we're going to cross back to the Marais and the Musée Carnavalet - the historical museum of the City of Paris.  Founded in 1880, the museum occupies one of the very few remaining Renaissance era buildings left in Paris.  It is filled with art and artifacts dating from the earliest Neolithic times through the 20th century, from exquisite antique porcelain to postage stamps.  Among the 10,000 objects in its inventory are the only surviving personal items belonging to the ill-fated Marie Antoinette and Robespierre's shaving dish!

The museum also owns 9,000 vintage photographs by Eugène Atget, purchased directly from the photographer as he was circulating around the city to capture its sights and sounds with his large format wooden bellows camera on a tripod.  It is particularly fitting that this museum, dedicated to the history of Paris, is now showing a special selection of 230 of these photos taken between 1898 and 1927 in an exhibition entitled "Eugène Atget, Paris".

With snapshots of streets and courtyards, hawkers of lampshades and baguettes, shop windows and prostitutes, Atget sought to preserve the Paris that he knew but feared was disappearing.  He did not consider them works of art, but rather documentation of the present time.  These photos soon caught the attention of the Surrealists, in particular the American artist Man Ray, who purchased several albums which he later gave to the George Eastman House in Rochester, New York.  Some of Man Ray's examples are also included in this exhibition.

As you can tell there has been a lot to see here in Paris and I've enjoyed every minute, but now it's time to go home to the heatwave in New York!  I'm looking forward to exploring the summer scene in the Big Apple and I'll hope you'll join me soon.
Posted by Georgina Kelman at 9:10 PM No comments: