"Picasso Black and White" at The Guggenheim

It is my humble opinion that when planning an exhibition on an extremely famous and prolific artist, less is usually more.  Specifically, a show with an angle or theme is usually more manageable and ultimately informative to the average museum-goer rather than an enormous survey of a master's output.  In the case of Pablo Picasso, probably the greatest creator of art of the 20th Century, how to chose from the estimated 50,000 works including paintings, drawings, ceramics, prints, tapestries and sculptures is a challenge for even the most accomplished curators or institutions.   So I was fascinated when the Guggenheim Museum advertised its major fall exhibition as the specialized and intriguing "Picasso Black and White".

This is the first time that an exhibition has focused exclusively on this aspect of Picasso's œuvre.   While his career has been categorized into the Blue Period or Rose Period or Cubist or Neo Classical, to name just a few phases, Picasso is supposed to have claimed that color, in fact, "weakens" and often strove to remove color from his works to give them more structure and autonomy.  Indeed, this historical survey of his work demonstrates very clearly his continuing obsession with the monochromatic and the power of black, white and gray.

Presented here are 118 works including paintings, drawings and several sculptures beginning with his iconic 1904 oil on canvas "Woman Ironing" (see left) that leaves no doubt that gray is as expressive as a rainbow of color.  Other examples include deconstructed Cubist works such as "L'accordéoniste", 1911, Surrealist works such as the biomorphic "Milliner's Workshop", 1926 (see below), and many portraits of his various wives and companions including Fernande Olivier, Olga Khokhlova, Marie-Thérèse Walter, Dora Maar, Françoise Gilot and Jacqueline Roque.  In every example, the tonality of black and white and gray served to enhance with its simplicity and allowed the strength of the line and form to shine. 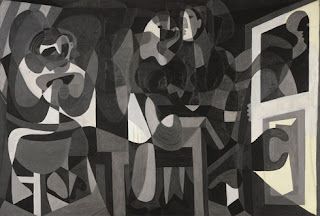 While some of the works on display seemed a little unfinished, or sketchy, the sum of the parts was a very impressive argument for the language of black and white and showed once again why Picasso continues to influence generations of artists.  "Picasso Black and White" is on view until January 23, 2013. 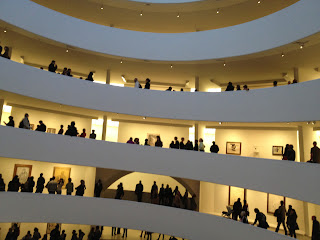 Posted by Georgina Kelman at 5:35 PM No comments:

One of the small but fascinating museum gems here in New York is the American Folk Art Museum on Broadway at 66th Street.  Beside their superb permanent collection of paintings, quilts, weather vanes, decorated household objects and the like, the museum also presents special exhibitions which are usually charming and quite interesting.

This is certainly the case in their latest show "Foiled:  Tinsel Painting in America" which runs through January 13.  Now, you might be asking yourself what exactly is tinsel painting and why should I care about it, and they would be valid questions, but a quick walk through of this exhibition would surely answer your concerns!

To answer the first query - tinsel painting is a domestic art that has its roots in Renaissance Italy, 18th century China and France and 19th century Austria, England and Germany.  Here in the U.S., tinsel painting (or Oriental, pearl or crystal painting as it was also called) was taught to young women of a certain class who were being educated in handwork and the decorative arts.  Very simply, it is a form of reverse painting on glass where metallic foil is applied to fill in unpainted areas and give them a shimmery look.  Sometimes the entire image is created of smooth or crumpled bits of foil, and sometimes the foil is an accent to other mediums such as photographs or collage.

Tinsel painting was at its most popular between 1850 - 1890 when the technique was applied to all manner of household and commercial products.  Gathered here are exquisite examples of signs and pictures, game boards, table tops, trays and mirrors, all beautifully decorated with colored foil.  Popular motifs include flowers and wreaths, fountains, birds and butterflies, but also more ambitious compositions depicting still lifes, religious allegories, historical events and patriotic themes.

Which brings me to the second part of the question - why is tinsel painting important?  The answer lies in the fact that it, like many other "women's" arts, was a link between practicality and fantasy, a form of personal expression by people who were primarily concerned with survival in the harsh New World.  More modest than the fine arts of painting or sculpture, an applied art such as tinsel painting could nevertheless fulfill the feminine ideal of beautification of hearth and home.  An exhibition such as this gives us an appreciation of how even simple arts and crafts actually impact our culture and innovations and, more importantly, the value of beauty in our lives.
Posted by Georgina Kelman at 4:30 PM No comments:

"Ivy Style" at the Fashion Institute of Technology 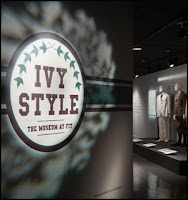 Of all the trends in men's fashions, none is as distinctive or as enduring as the "Ivy League Look".  Quintessentially American, the vogue has its origins in elite college campus' of the early 1900s.  While sometimes considered a conservative way of dress, at the time of its inception Ivy Style was cutting edge and its appeal quickly spread beyond universities to working class G.I.'s and jazz musicians.  Even though its popularity waned a little in the 1960s it has come back stronger than ever thanks to its re-invention as "preppy" and a lot of attention from designers such as Ralph Lauren and Tommy Hilfiger, to name just two.

As further testament to its enduring style, the Ivy League Look has recently been celebrated with an exhibition at The Museum at FIT, Manhattan's Fashion Institute of Technology in the heart of the Garment District on Seventh Avenue.  In the interest of full disclosure I should also mention that I was even more compelled to see the show because my friend Christian Chensvold was involved in the exhibition and contributed an essay to the catalogue.  But personal feelings aside, this is a fabulous show.

Arranged thematically rather than chronologically, the exhibition explains the collegiate origins of the style and then creates a stage set of an Ivy League university campus.  Mannequins wearing lounge wear are in a dorm, outdoor clothes on the "Quad", evening wear at a fraternity function and athletic clothes in a locker room, with each environment fitted with the appropriate props and recorded band music plays in the background.  This is a trip down memory lane!

You didn't have to go to Harvard, Yale or Princeton to know what Ivy Style was about or to aspire to "the look".  Iconic pieces such as Weejun penny loafers, Oxford button-down shirts, crewneck Shetland sweaters, chino trousers, duffel coats and Madras anything were de rigeur on any college campus and brand names like Brooks Brothers, J. Press, Chipp and Gant were the signatures of style. Today's "preppy" look now extends to women and is a little more trendy but the characteristic elements remain.  This is what is so remarkable about Ivy Style.  It is a uniquely American look that has stood the test of time - updated but classic, elegant yet playful, sporty yet refined - and still very much alive.

"Ivy Style" is on view at FIT until January 5th, 2013 and admission is free.
Posted by Georgina Kelman at 5:41 PM No comments:

With all of the commotion here in New York in the aftermath of Super Storm Sandy, having the long-planned IFPDA Print Fair open only 24 hours late was a welcome sign of normalcy in this discombobulated city.

It what became a heroic "on-with-the-show" effort, 90 dealers from across the United States, Canada and Europe, assembled in the Park Avenue Armory and the show opened to the public on Thursday evening, November 1.  Not surprisingly there were a few show casualties - one German dealer's booth was entirely empty until his late arrival on Friday afternoon, one New York dealer valiantly greeted visitors to her bare stand as the prints were completely unaccessable in her gallery on West Broadway, and another German dealer relied on the kindness of colleagues who set up and manned his booth in his absence. 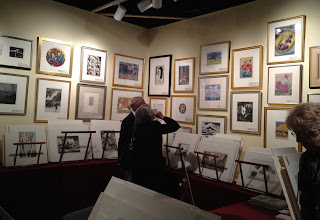 There were amazing stories of trials and tribulations in just getting to New York.  One British dealer told of finally getting to Toronto after several cancelled flights from London.  Once in Toronto, he took a Greyhound bus to Buffalo, caught a plane to Philadelphia and finally shared a limo with a local dealer to take them up to the fair.  Another couple spent three nights in a motel in Secaucus, NJ, just waiting to get into Manhattan.  Other dealers who managed to arrive ahead of the storm were thwarted by the non-delivery of their inventory making for a nerve-wracking, last-minute hanging of the booth just before the fair opened to the public. 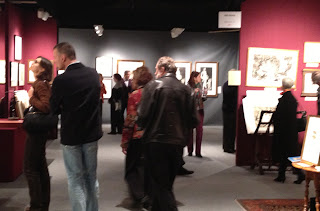 In spite of the obstacles to both organizers and exhibitors, the fair looked as beautiful as ever when I arrived at the preview party.  There were prints of every genre from old masters to contemporary, and at prices to match almost any budget.  I loved the colorful British linocuts on the wall of the Redfern Gallery, London.  Ruth Ziegler Fine Arts, New York, showed a very impressive display of 19th and 20th Century masters such as Renoir, Villon and Morandi.  Jörg Maass Kunsthandel, Berlin, featured only woodcuts by Otto Dix on his back wall, while Frederick Mulder, London, did the same with linocuts by Picasso.  And for a total Picasso junkie there was no better place to be than the stand of John Szoke Editions, New York, who filled the booth with prints from every phase of Picasso's career.

I count my blessings that I was among the fortunate few who did not lose power nor suffer any damage to property.  Apart from a few minor inconveniences like no mail delivery and limited transportation I suffered no ill effects from this terrible storm that wiped out entire communities and left many New Yorkers and New Jerseyans still homeless.  Given the dire circumstances, I realize that a print fair is not that important in the scheme of things.  But I do applaud the tenacity and the ingenuity that made this fair happen despite the worst that Mother Nature dished out.  You just can't keep a good print fair down!!!

Posted by Georgina Kelman at 5:40 PM No comments: