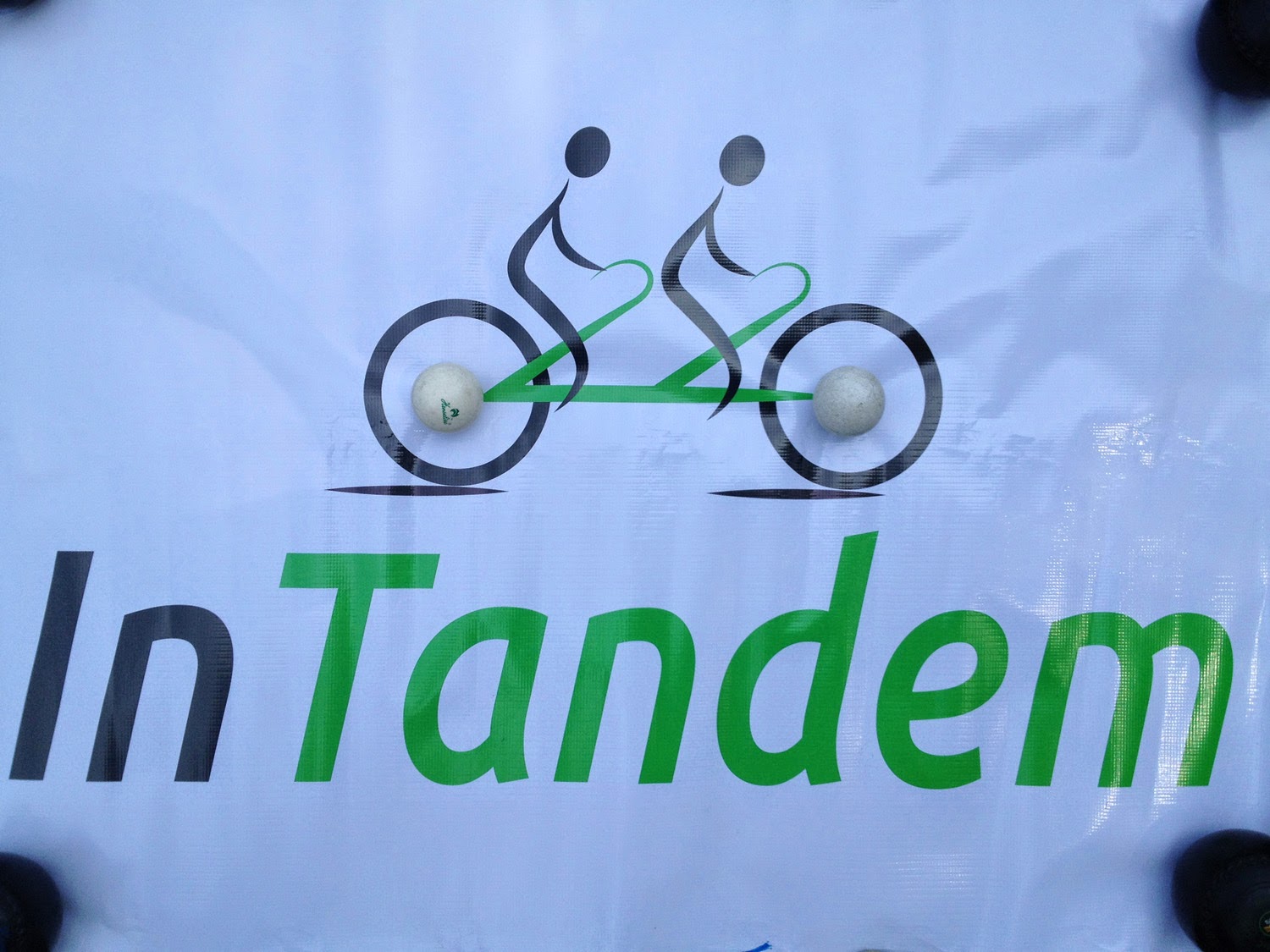 Some of my readers know that I am an avid lawn bowler and play as often as I can with the New York Lawn Bowling Club in Central Park.  Last weekend I had the opportunity to participate in a remarkable new event that we hope will become an annual date on the calendar.  It was the first annual VIBBY tournament - a unique collaboration between the New York Lawn Bowling Club (NYLBC) and In Tandem, a group of bicycle enthusiasts who just happen to be visually impaired. 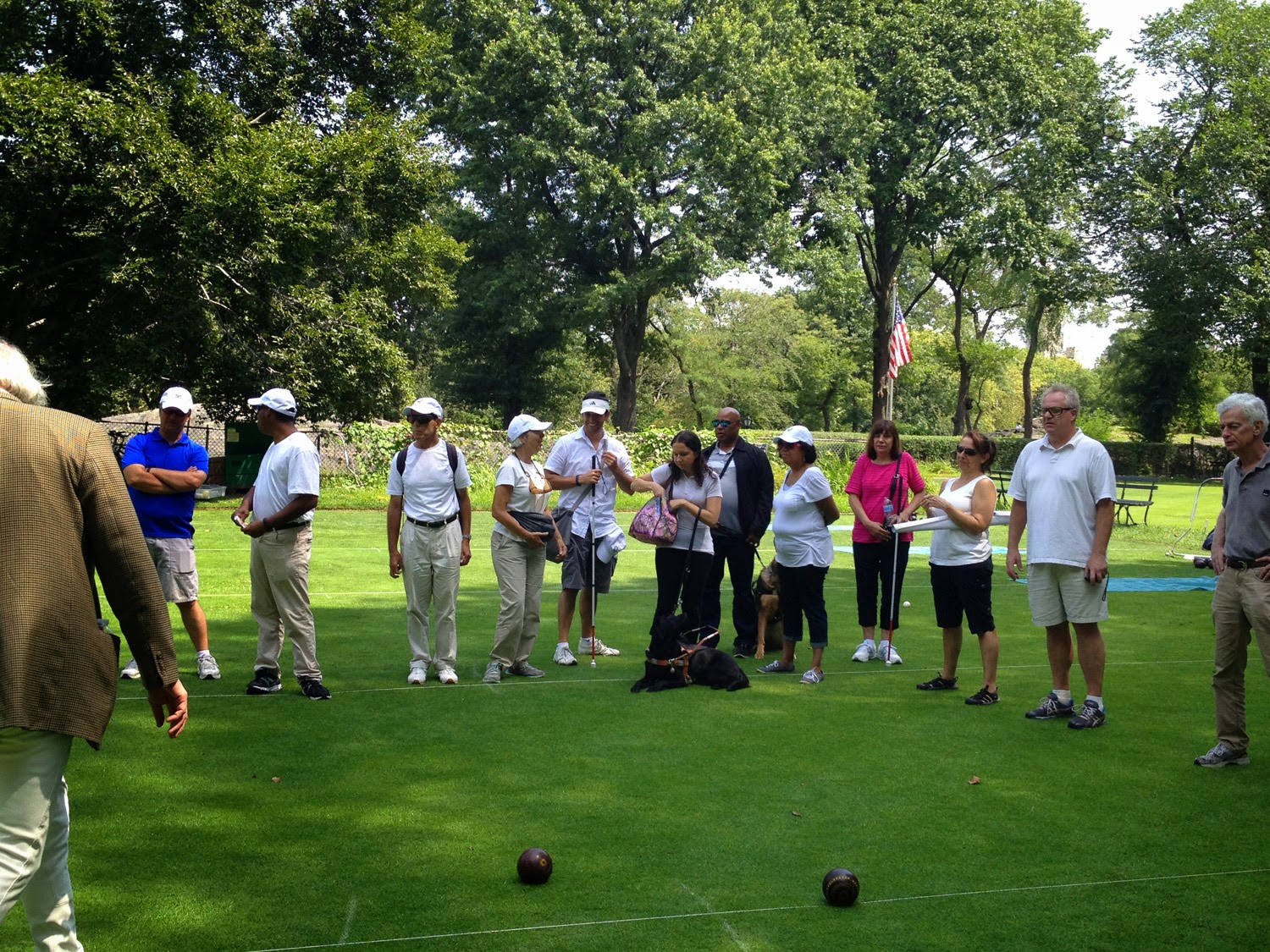 As with many of life's great ideas, it all started with a conversation between two friends, one a college professor and active NYLBC bowler and his friend who began In Tandem.  Working with the principal that a visually impaired person, the "stoker", can ride a tandem bike with a sighted "captain", why couldn't the same partnership be applied to lawn bowling?  And so they began to offer Monday night training sessions on the lawn bowling green in Central Park. 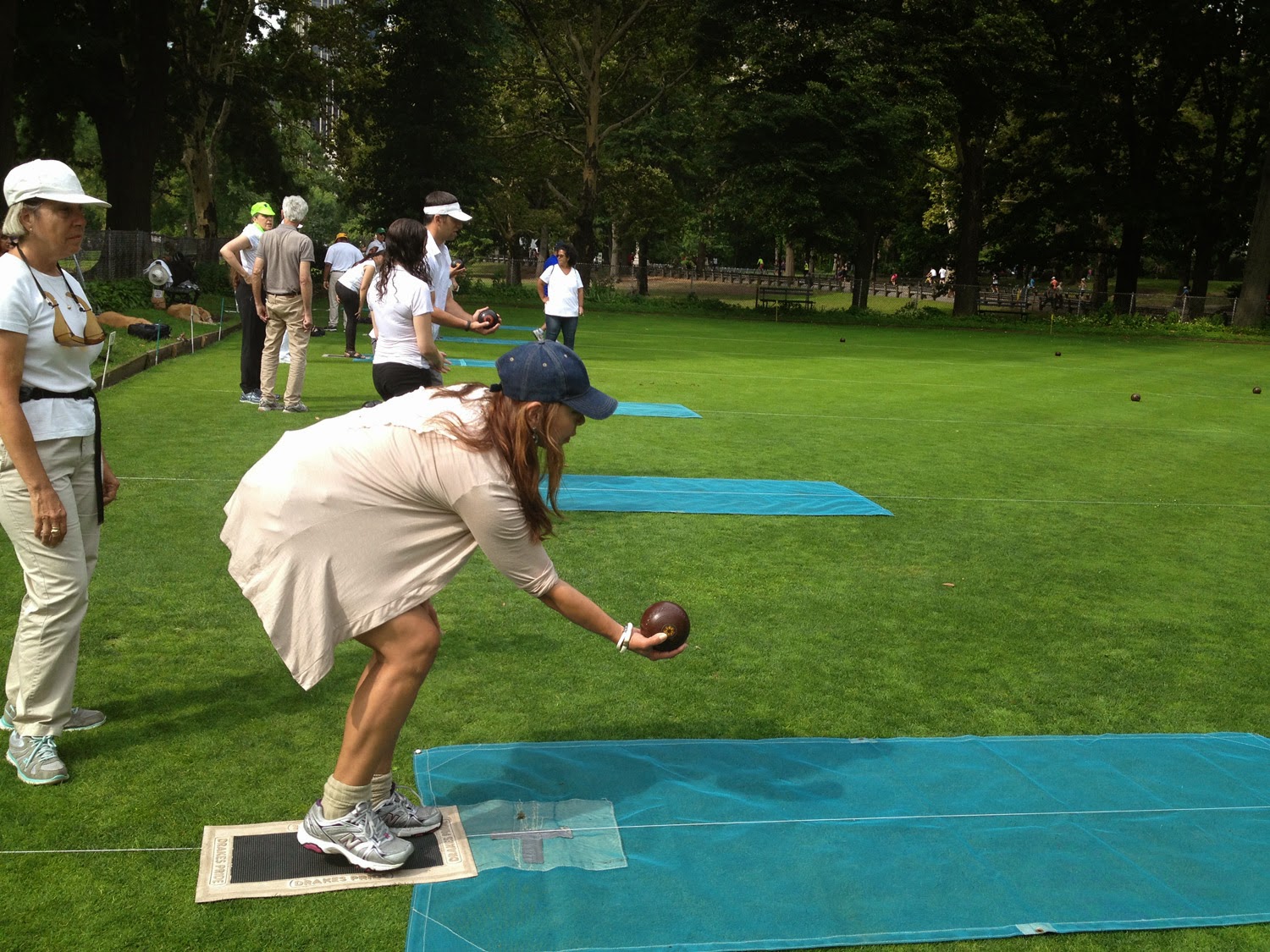 The response was very positive and the new players worked hard on their games in preparation for the first annual VIBBY Tournament - Visually Impaired Bowlers with an extra "BY" for emphasis!  A call went out for volunteers and somewhat apprehensively I signed up. 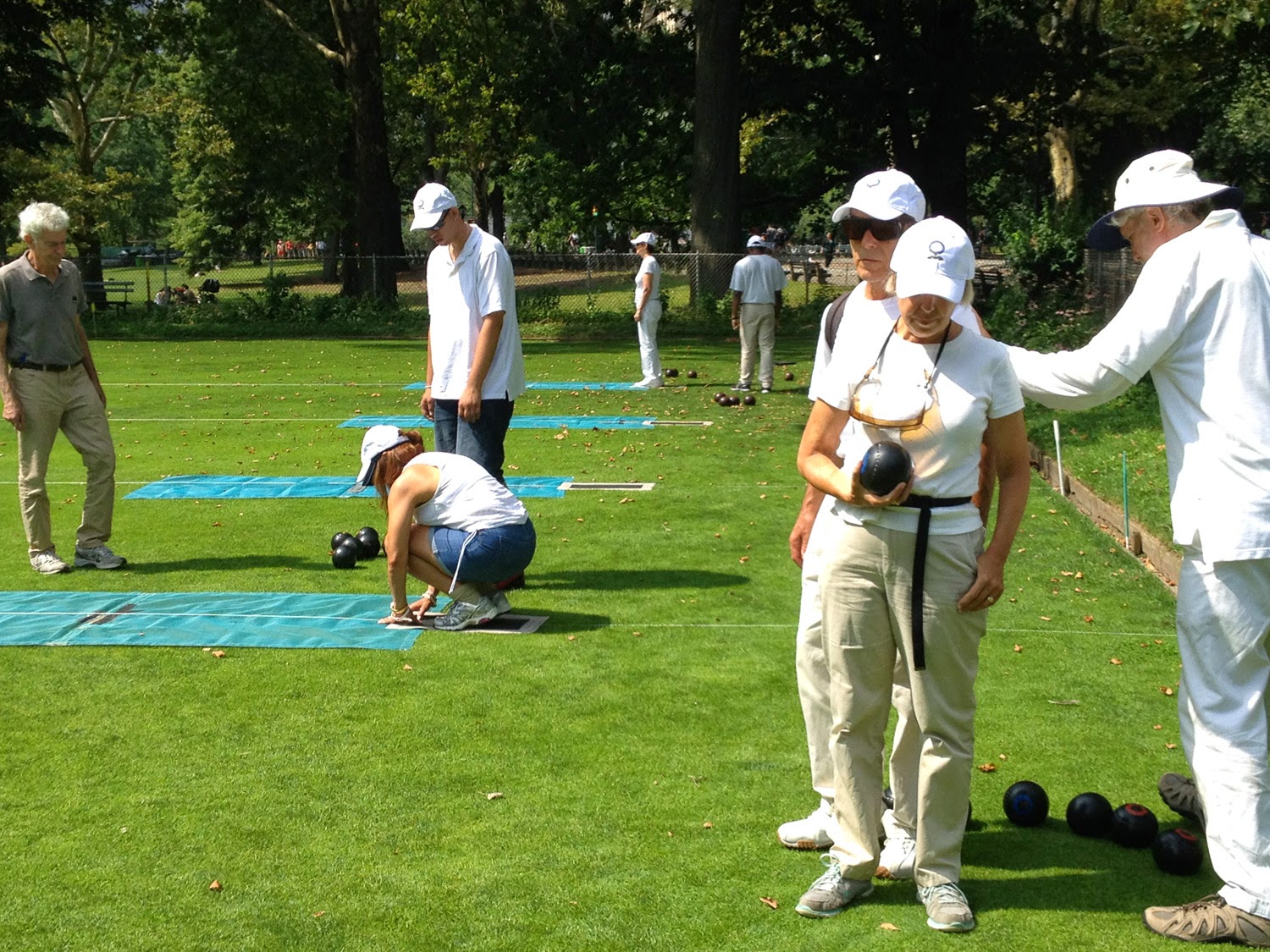 I can tell you that this was one of the best experiences I have ever had on the lawn bowling green.  I arrived with absolutely no idea what to expect and left with an even higher regard for people who overcome physical challenges with enthusiasm and determination. 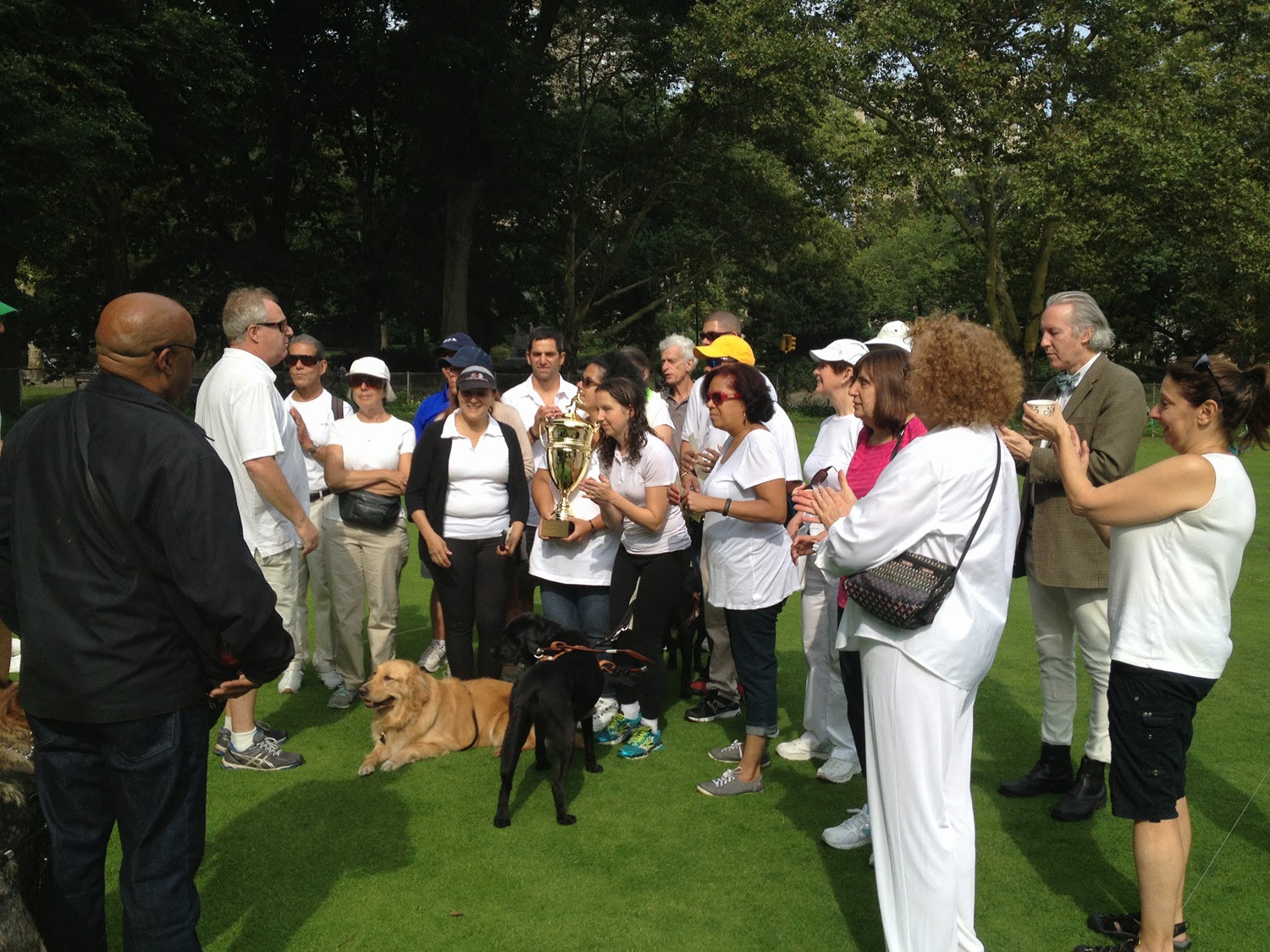 One dozen bowlers afflicted with varying degrees of blindness arrived at the green with white sticks and dogs ready for a big adventure.  We had set up six rinks each with a white string from end to end so the bowlers could either feel the line or see it.  Then we chalk-marked jack (target) distances of 21, 22 and 23 meters directly onto the grass to eliminate the need to roll and center the jack. 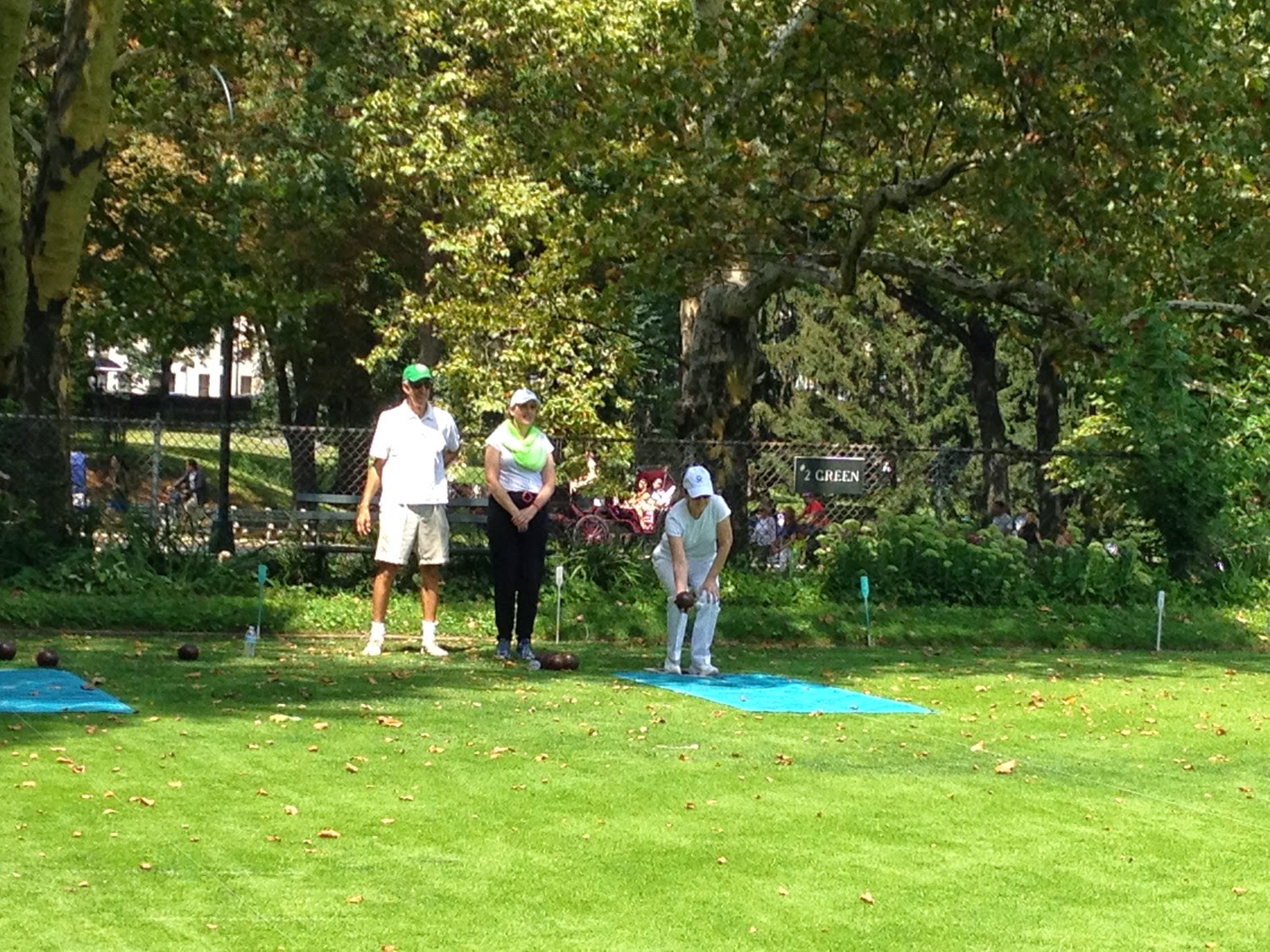 After a rousing rendition of the Star Spangled Banner and a coin toss, the competition was on!  Six singles games of six ends each with a sighted assistant - my job - at one end with the bowlers and another standing at the jack to clap giving the bowlers a target and then to call out where the bowl had landed.  After each end was played, I would take my bowlers, sometimes by the hand, down to the other end of the rink and bowl back.

Excitement was high as we reached the final playoffs and all participants were on the green breathlessly following the play-by-play calls of the sighted assistant.  Two women bowlers battled it out for first and second place and finally it was Kim Paulk who prevailed.  She had had an especially good week as her employer, Tim Cook, the CEO of Apple, had given her a shout-out on the company website for her exceptional performance as an Apple specialist.  When you consider that Kim has been hearing and vision impaired since birth, it was a particularly sweet moment. 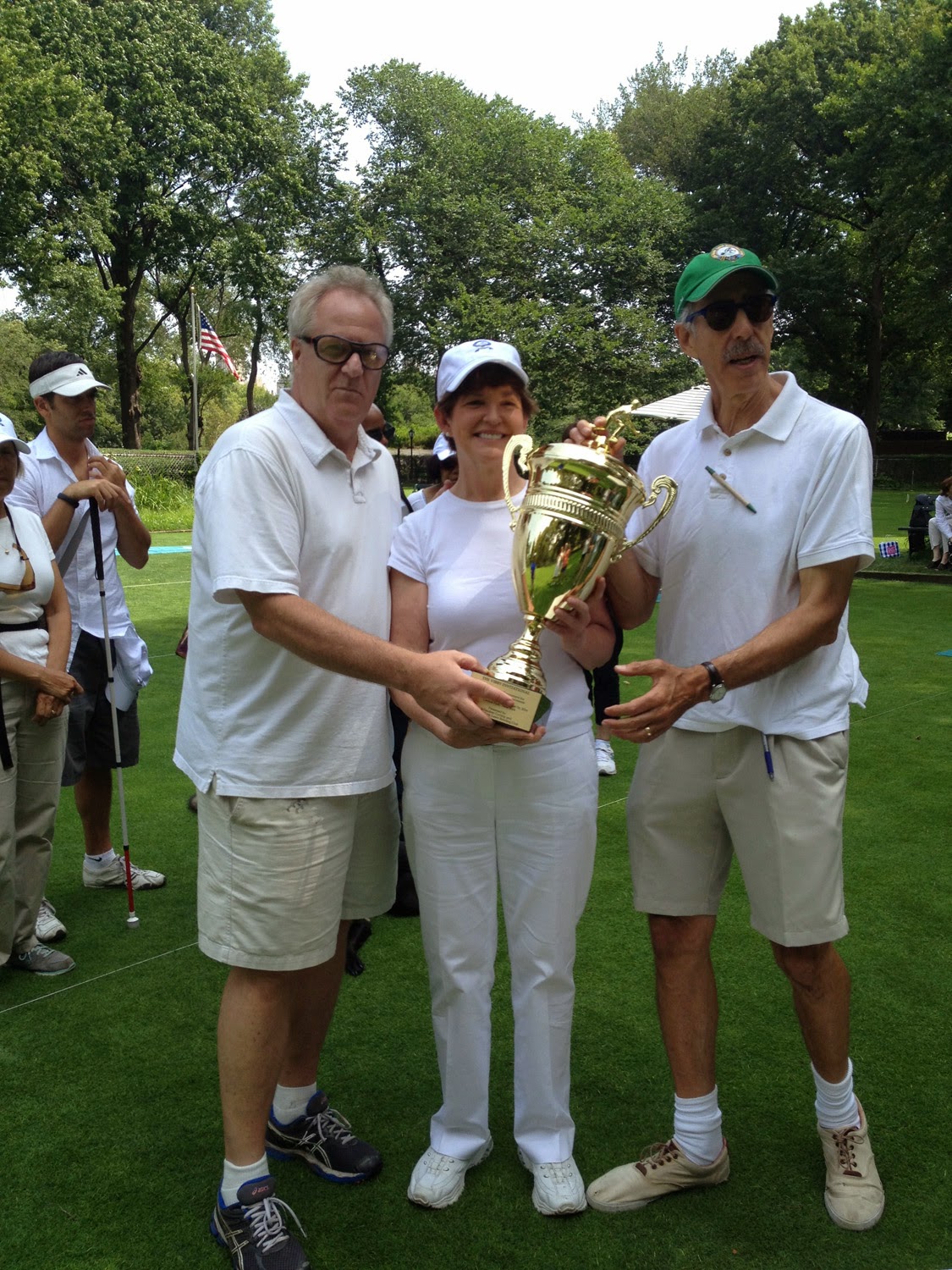 The First Annual VIBBY tournament was an huge success and a good time was had by all.  Even my initial trepidation - more an anxiety with the unfamiliar - disappeared in minutes and I was totally engrossed in the event and "my bowlers".   After the trophy presentation several of the organizers and participants thanked me for helping to make the event a success.  But the truth of the matter is this - it is I who thank all of you for your courage, for your energy and for your inspiring spirit.  It was a marvelous day!

P.S.  With special thanks to Alan Winson and Stanley Zucker who made this all happen!
Posted by Georgina Kelman at 9:51 PM 2 comments:

The brave and hardy souls who crossed the ocean to settle the New World certainly had a lot more on their minds than decoration and design.  To be sure, mere existence - food, shelter, safety - were first and foremost in their collective psyche.  But human beings have a natural desire to create and express themselves through ornament and so, once the basic necessities were taken care of, these new Americans began to embellish everyday items and later create objets d'art with no intrinsic practical purpose. 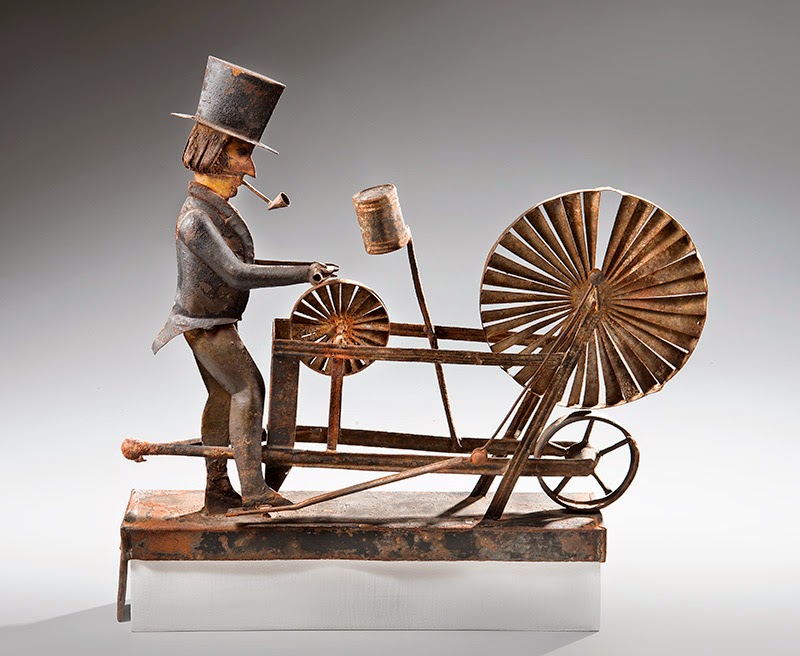 Often this primitive adornment is referred to as "folk art" or "outsider art" - works of beauty created by people with no formal artistic education or training.  In their current exhibition, the American Folk Art Museum takes the notion one step further by introducing the concept of "self-taught genius". 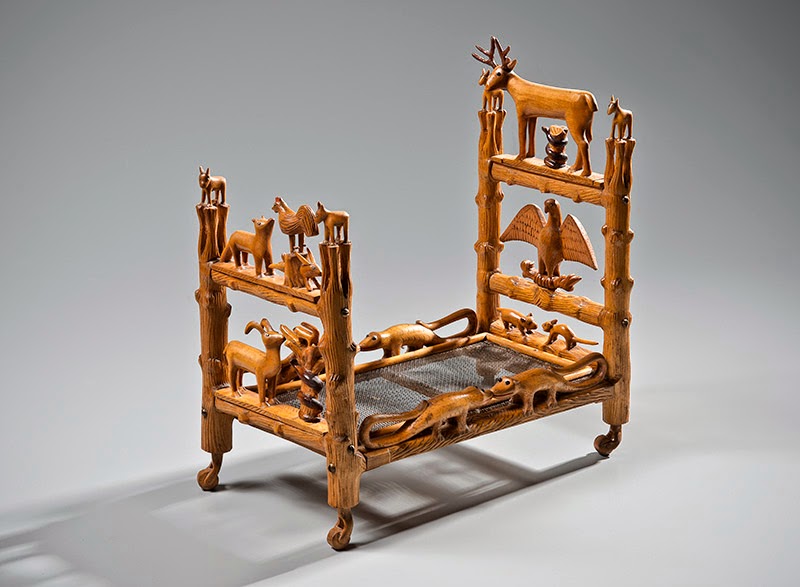 What exactly is "self-taught genius" you might ask?  Let's begin with the underlying tenet that after the War of Independence all the citizens of this new United States had to invent and create what it was to be an American.  They were literally "self-taught Americans" developing a culture and history as they went along.  Independence and freedom fostered ingenuity, self-reliance, individual growth and a strong national identity. 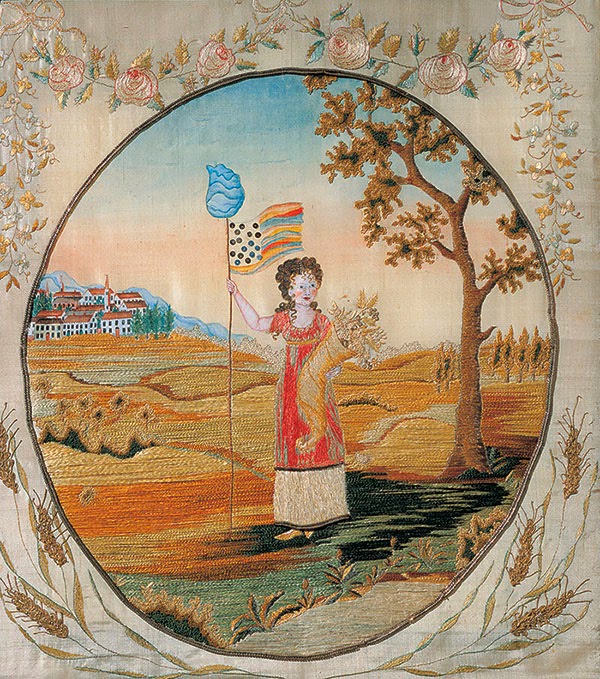 Which brings us to the "genius" part of the equation.  The curators of the exhibition define "genius" as a "potential for creative thought and vision inherent in the consciousness of all people".  Not a result of academic study and endless repetition but an innate ability to understand and express original ideas through any artistic medium. 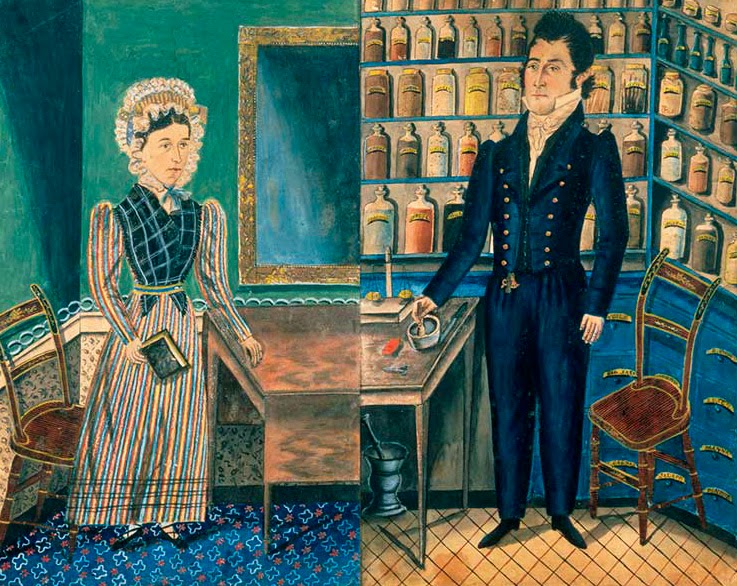 And so, finally, we come to some of the splendid examples of what these "self-taught geniuses" have produced in the 238 year history of the United States of America.  Arranged loosely in categories including "Ingenuity", "Reformers", "Achievers" and "Messengers" are over one hundred examples of works ranging from the utilitarian to the fantastic, all created by auto didactic artists. 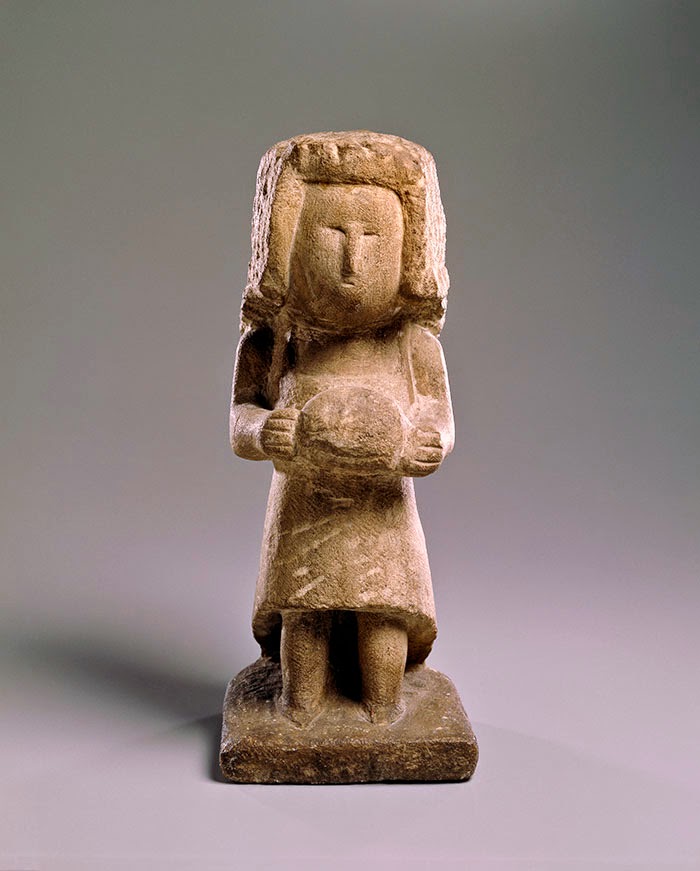 From a modern perspective - especially with what passes for Contemporary Art these days - few would question that these works, whether intended as "art" or not, were made by people with exceptional creative and aesthetic talents.  People who felt so passionately that they intuitively expressed their emotions by painting, drawing, sewing, carving or otherwise channeling their vision into a physical object.  The urge to "make something" definitely precipitated "self-taught" - but is it truly "genius"?  While the exhibition certainly makes one ponder the question there is no clear cut answer.  Is one an artist because of, or in spite of, training, and is a formally trained artist better or worse than an intuitive one?  One thing is sure, these are expressions of love, objects of desire and works of vision.

"Self-Taught Genius" will travel throughout the United States until 2017. 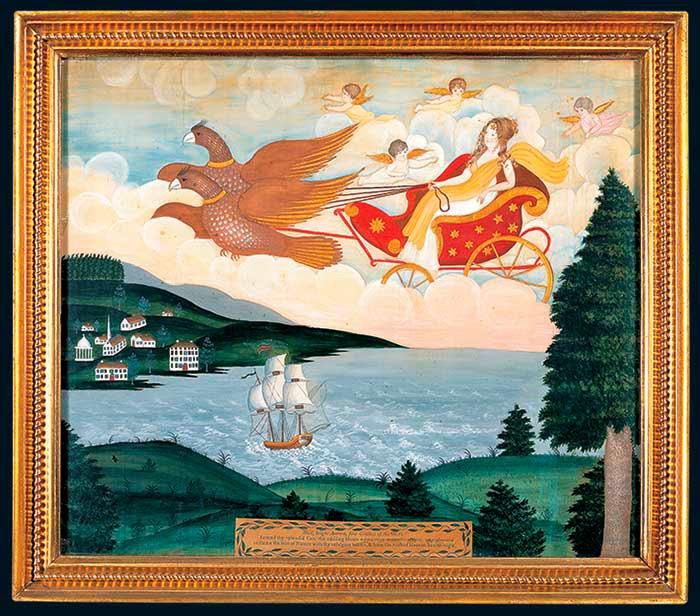 "The Paris of Toulouse-Lautrec" @ MoMA

Think Belle Epoque Paris and what springs to mind?  Images of ladies wearing big hats sitting in a café?  The sound of can can music playing at the Moulin Rouge?  A faintly unsavory world of absinthe and smoke and seduction?  All of these portrayals would be an accurate reflection of a certain culture of the time, an atmosphere that has been ingrained in our modern perception largely through the posters and prints of one predominant illustrator, Henri de Toulouse-Lautrec.

Indeed the work of Toulouse-Lautrec (1864-1901) has truly come to symbolize life in the City of Lights at the turn of the century.  Aristocratic by birth, but a bit of an outcast due to physical deformity and a proclivity to drink, Toulouse-Lautrec was a habitué of the almost seedy night life that he depicted so vibrantly in his art.  His fascination with the demimonde - the world of café-concerts, circus, dance halls and cabarets - and his political, literary, artistic and social connections came together brilliantly through the medium of color lithography. 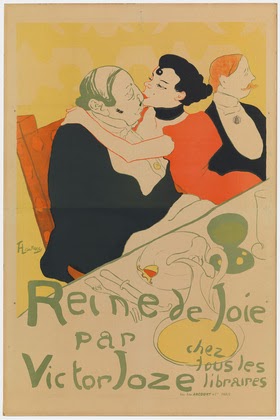 The genius of Henri de Toulouse-Lautrec's snapshots of Belle Epoque Paris can now be seen in an exhibition at the Museum of Modern Art, New York.  Drawn almost entirely from MoMA's extensive holdings, "The Paris of Toulouse-Lautrec" presents over 100 superb examples of the kind of posters, lithographs, illustrated books, programs and ephemera for which he is so well known. 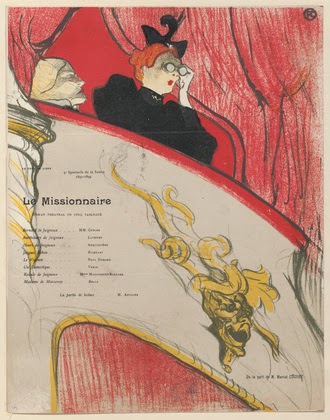 The show is divided thematically into five sections that illustrate the Paris of Toulouse-Lautrec.  It opens with a look into the world of the café-concerts and dance halls where, for the first time, men and women could go together for a drink and a show.  These were an entirely new venue for Parisian night life and were wildly popular.  Toulouse-Lautrec was a regular patron and he became very close with many of the performers in the locales.  His muses included the clown Cha-U-Kao, the dancers La Goulue and Loïe Fuller, the actress' Yvette Guilbert and May Milton and especially Jane Avril whom he portrayed over and over both on-stage and off. 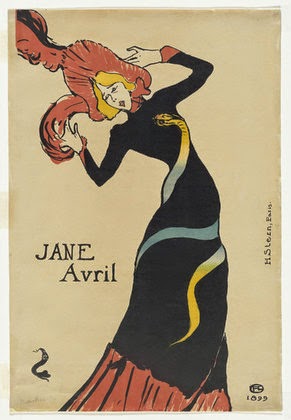 Which brings us to Toulouse-Lautrec's relationships with women, which were unusual to say the least.  Due to some congenital health issues (his parents were first cousins) and a couple of childhood accidents, Toulouse-Lautrec did not grow into a fully developed adult male.  His father left the family when he was young and his mother, a rather overbearing Catholic, was extremely protective of her only son.  Toulouse-Lautrec rebelled against his bourgeois upbringing by disappearing into the nightlife of Montmartre where he surrounded himself with writers and musicians as well as prostitutes, models and performers.  He must have been a non-threatening presence as these women allowed him into their inner sanctums and offered him true friendship. 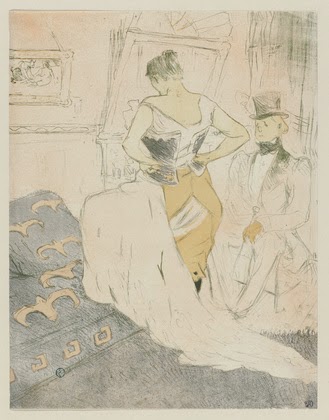 It is this intimate familiarity with working women that is expressed in Toulouse-Lautrec's portrayals of their lives out of the public eye.  Images of women bathing, dressing and sipping a coffee are quite touching and show a very rarely exposed side of this segment of French society.

The exhibition continues with a look at his relationship with the artistic community and presents several examples of works done in collaboration with authors, composers and printers.  Toulouse-Lautrec was a regular contributor to magazines and literary reviews and worked with his friends and colleagues to promote their books and shows. 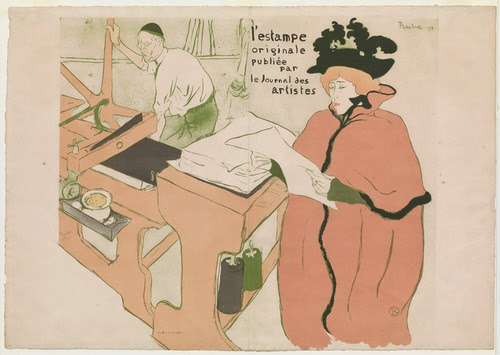 The last section is devoted to the City of Paris - a place the artist adored.  Although he was born and died in Albi, Toulouse-Lautrec considered Paris his home and he enjoyed every facet from the Bois de Boulogne to the racetrack at Longchamp to the ice skating rink at Gran Plaza de Toros.  Wasted by syphillis and his dependency on alcohol, Toulouse-Lautrec died a premature death at the age of 36.  It was a short but meteoric life and his legacy continues to this day we relive La Belle Epoque through the eyes of one of its greatest participants.  "The Paris of Toulouse-Lautrec", beautifully curated by Sarah Suzuki, remains on view until March 1, 2015.
Posted by Georgina Kelman at 8:19 PM No comments: