A Weekend in Newport, RI

If you've ever seen the 1956 movie "High Society" you'll understand the appeal of a weekend in the town of Newport. So it was with great pleasure that we accepted a very generous invitation to be guests of a dear friend who summers on the Rhode Island shore.

Newport boasts a long and rich history and is one of the Colonial treasures of the Eastern United States. Settled in the 1700's, the town established itself as a political, religious and cultural refuge and attracted immigrants looking for a new life filled with opportunity and freedom. Its fine harbor made it a center for both commercial shipping and later recreational sailing, both industries having a huge impact on the development of the town. The late 1800's saw an influx of wealthy "Barons of Industry" who chose Newport's fabulous location as the sites for their opulent summer "cottages". And in the 20th Century, Newport has become home to The America's Cup and the International Tennis Hall of Fame. 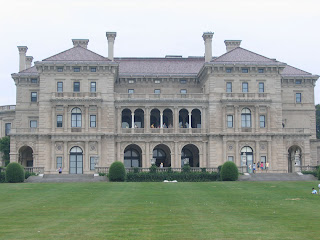 A beautiful summer Saturday was the perfect day to explore some of Newport's Mansions. Thanks in large part to The Preservation Society of Newport County a great many of Newport's magnificent mansions are fully restored and open to the public. These summer homes of the über-rich and famous present the VERY best that money, and imagination, could buy at the Turn of the Century. A tour of Cornelius Vanderbilt II's 70-room palace, "The Breakers" will leave the visitor in open-mouthed awe. Designed and built in just 2 years, this magnificent building, set on 13 acres overlooking the Atlantic, was decorated by Ogden Codman in a sumptuous interpretation of an Italian Palazzo. Outfitted with the latest conveniences such as an interior telephone system and electricity, it remains the epitome of elegance. 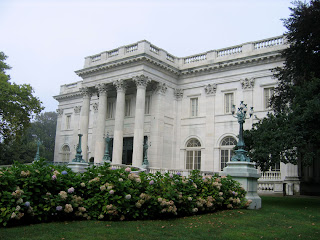 Another Vanderbilt heir, William K., spent $11 million on a 50-room "cottage" to present to his wife Alva on her 39th birthday. "Marble House" was completed in 1892 and was considered the most lavish home in America at the time of its construction. The quintessential example of "The Gilded Age", Marble House was also the site of Mrs. Vanderbilt's crusade for the "Votes for Women" campaign. Alva Vanderbilt's ambition knew no bounds. She deliberately built Marble House to compete with the Astor's Mansion, "Beechwood", practically next door, and maneuvered her daughter, Consuelo, into a marriage with The Ninth Duke of Marlborough. She eventually divorced her husband, the first in her social set to formally end a marriage, and moved a few houses down the avenue to take up residence with her new husband at Belcourt Castle.

One can spend days visiting these fabulous homes - "Chateau-sur-Mer", "Kingscote", "The Elms", and, "Rosecliffe", to name just a few, but Newport offers other delights. There is, for example, the National Museum of American Illustration with its collection of original works by Norman Rockwell, N.C. Wyeth and Maxfield Parrish. There is also the Newport Art Museum with its outstanding collection of artists past and present, and the spectacular "Cliff Walk".

Sunday was taken up with a very special event - The International Tennis Hall of Fame, located in the historic Newport Casino, was hosting the First Annual Gibson Guitar Champions Cup. We were the happy occupants of court side seats for the third place playoff between Jim Courier and Pat Cash and the finals match between John McEnroe and Todd Martin. 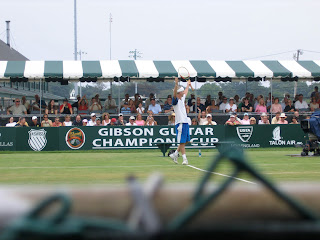 It was a very warm and humid afternoon, but the stands were full and the atmosphere collegial as these titans of tennis played for the championship on the grass court. It was like a very low key Wimbledon - all that was missing were the strawberries and cream! 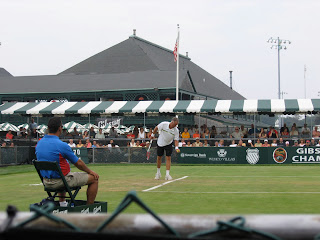 Monday morning was time to leave and return to the reality of summer in the city. But I came back to Manhattan with memories of a wonderful weekend in Newport where time stands still in a more elegant age.
Posted by Georgina Kelman at 3:50 PM No comments: 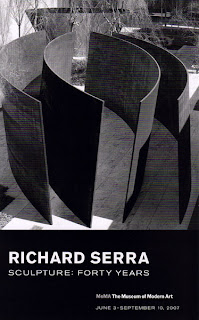 The word "monumental" springs to mind when thinking of how to describe MoMA's summer exhibition "Richard Serra Sculpture: Forty Years". How else could one summarize 550 tons of rolled steel torqued and twisted into impossible shapes that totally envelope the visitor? Spread throughout the museum premises, from the Abby Aldrich Rockefeller Sculpture Garden to the Second floor Contemporary Galleries to the top floor's International Council Galleries, are 26 works of art that highlight this American artist's career from its infancy in the 1960's to 3 brand new works that had never before been exhibited.

Although Richard Serra (b. 1939) majored in painting when he graduated Yale University's School of Art and Architecture in 1964, he quickly discovered that sculpture was his true calling and he began to create works using non-traditional materials such as rubber, lead and fiberglass. It became not so much the finished product that excited him, but the act of creating works of art. This involvement in the physicality of fabrication has evolved from his early "Splash Pieces" that literally involved throwing spoonfuls of molten lead against the warehouse wall of his art dealer, the legendary Leo Castelli, to his recent steel sculptures that engage the viewer with the experience of traveling through the piece.

It is hard to describe the emotional response to the experiential viewing of a huge work of art. It is a totally different process than simply standing back and having a look. The pieces are immense, but the visitor is drawn to enter the small opening that leads into the sculpture and then is literally surrounded by high walls of rolled steel that curve and lean, at the same time, in seemingly impossible angles. It is simultaneously daunting and exhilarating. Not a thrill like a carnival ride, but a challenge to the senses and perception. Is it safe? Will they fall? Can I find my way out? And finally, relief, and a new appreciation for the beauty and magnificence of Serra's visions of form and space. A monumental experience in every way! 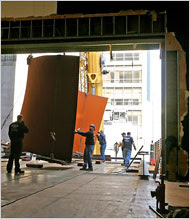 Installing a Richard Serra sculpture
at the Museum of Modern Art
Spring 2007
Posted by Georgina Kelman at 12:59 PM No comments:

The Spirit of Django Reinhardt 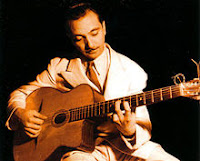 Jean "Django" Reinhardt is remembered today as one of the greatest jazz guitarists of all time, but few could have predicted that his gypsy childhood in France would land him on the coveted stage of Carnegie Hall!

Born in Liberchies, Belgium, in 1910, young Django learned to play the banjo, guitar and violin and was performing in Parisian music halls at a very early age. His musical career appeared to be cut short when a terrible fire in his caravan burned much of his body, paralyzed his right leg and severely injured his hand. Despite overwhelming odds, Django re-learned to play the guitar using just 2 fingers of his left hand to work the chords.

In 1934, Django teamed up with his brother Joseph, violinist Stéphane Grapelli, and 2 others to form "Quintette du Hot Club de France". The rest is musical legend. Jazz music was the rage in Europe and America and he rode the crest of the wave. Despite being musically illiterate, Django played with some of the greatest jazz musicians on both sides of the Atlantic. Amazingly he survived World War 2 with the help of a sympathetic Luftwaffe official known as "Doktor Jazz" who greatly admired his music and protected him from an almost certain trip to a concentration camp that was the fate for many gypsies.

After the war, Django continued to perform but the introduction of the new electric guitars did not suit his style and he eventually returned to his simple gypsy roots. He retired to Fontainebleau France in 1951 and died of a brain hemorrhage just 2 years later.

But the impact of Django Reinhardt lives on. His unique guitar style is credited by many popular musicians as the biggest influence on their careers. B.B. King, Carlos Santana, Peter Frampton, Jerry Garcia, George Benson and Willie Nelson have all publicly acknowledged their admiration and respect for Django as one of the greatest guitarists of the 20th Century.

Most recently, the New York institution "Jazz at Lincoln Center" celebrated its 5th annual "Spirit of Django Reinhardt" concert at the brand new Frederick P. Rose Hall in the Time Warner Center. This sold-out show featured 2 acts with some of the greatest stars of the contemporary gypsy jazz movement, all influenced by Django Reinhardt. With guitarists Dorado Schmitt, his son Samson and John Jorgenson, Ludovic Beier on accordion and accordina, Pierre Blanchard on violin and an outstanding performance by Colombian Edmar Castaneda on the jazz harp, these musicians prove beyond a doubt that "Le Jazz Hot" is alive and well and thriving in the the 21st Century!
Posted by Georgina Kelman at 9:18 AM No comments: