"Big Bambú" On the Roof at The Met

The summer art season is winding down and many of the big shows are closing so that the fall exhibitions can be installed. But one special museum work has actually grown over the summer and will continue to expand until the end of October when it will finally be dismantled. What is this marvelous magical piece? It is "Big Bambú" a site-specific installation now on view on the Roof Garden of The Metropolitan Museum of Art. 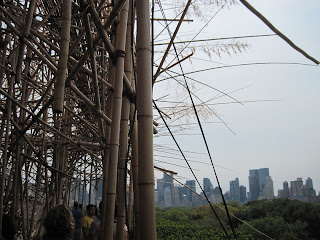 Conceived and created by the artists Doug and Mike Starn, identical twins who work collaboratively in a variety of media, this is the thirteenth consecutive summer installation on the Roof Garden, and probably the most spectacular. Visitors exit the elevator and step into a forest of bamboo poles, some measuring 50' in height, that cover the Roof Garden in a dense thicket. Hundreds of poles are lashed together with nylon rope creating a maze and providing a natural canopy of a seemingly haphazard construction. 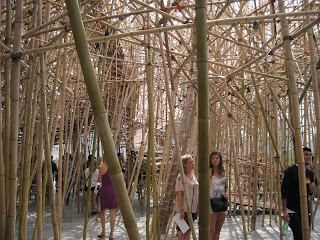 This is a true participation piece as visitors walk among the "trees" enjoying the beautiful view of Central Park from a totally different perspective. Intrepid souls can book ahead for a special tour which includes a walk along the interior paths that hover 20-40 feet above the roof while more passive observers like myself can stay closer to terra firma with a cold drink from the rooftop cafe. 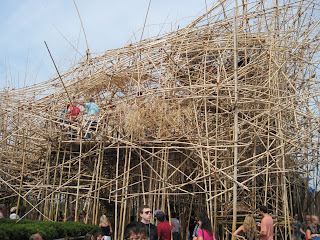 "Big Bambú: You Can't, You Don't, and You Won't Stop" is part sculpture, part architecture and part performance piece but it is 100% pleasure to visit! 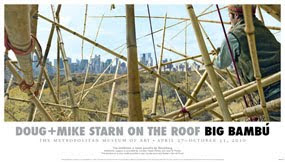 Posted by Georgina Kelman at 10:38 AM No comments:

Henri Matisse (1869-1954), along with Pablo Picasso and Marcel Duchamp, is without a doubt one of the most important and influential artists of the 20th Century. His output was prolific and his styles ranged from the bright and edgy radicalism of the Fauves to the languid and Orientalist "Odalisque" paintings of the 1920's.

But it was during the 1910's, almost exactly the period when Europe was engulfed in World War I, that Matisse produced some of the most experimental and abstract works of his career. Between his return from Morocco in 1913 and his departure for Nice in 1917, while he lived and worked in Paris and its environs, Matisse drove himself to rethink, redefine and ultimately reinvent his œuvre.

In conjunction with The Art Institute of Chicago, The Museum of Modern Art, New York, is now presenting an in-depth look at this watershed period in the artist's life. By examining over 120 paintings, sculptures, drawings and prints, visitors can see how the Matisse approached his subjects and through repetition, elimination, and re-creation to actually reinvent the motif.

Through side by side examples we can compare and contrast and try to understand how he worked to break down tradition while attempting his own dialogue with the emerging languages of Cubism and Modernism. In "Still Life after Jan Davidsz. de Heem's "La Desserte", 1915, we see a thoroughly updated version of the Old Master work "La Desserte" by Jan Davidsz. de Heem painted in 17th Century and hanging nearby. In Matisse's version we see the same composition reinterpreted with Constructivist overtones using techniques such as scraping, and scratching that would have been inconceivable for the original.

An example of Matisse's obsession with "pairs" and extensions of a theme can be clearly seen in the two paintings "Bowl of Apples on a Table" and "Apples". Both were painted in 1916, both are the same size, and both are basically the same image - a bowl of apples on a small round table. Here is where the similarities stop. "Apples" was painted very quickly and evenly with small areas where the canvas is allowed to show through. "Bowl of Apples on a Table", on the other hand, was painted, scraped, reworked, scraped, painted again and scraped, over and over to build up countless layers of color and texture. The resulting pair are like fraternal twins - basically the same but totally different.

Perhaps the most striking illustration of the evolution of Matisse can be seen in the suite of four life size bronze sculptures entitled "Back" (see above). Begun in 1908 with the final revision completed circa 1931, the image goes from a life like nude to a totally abstract form while remaining the same basic perception. It is clear evidence of the genius of Matisse and the reason his work resounds to this day.

"Matisse: Radical Invention, 1913-1917" is on view at MoMA until October 11. Be aware that timed entry tickets are required.
Posted by Georgina Kelman at 3:11 PM No comments: