Discovering The Metropolitan Museum of Art

Founded in 1870 by a group of businessmen, art collectors, civic leaders and philanthropists, The Metropolitan Museum of Art has grown from a small outpost on West 53rd Street to a sprawling Beaux Arts inspired complex on Museum Mile.  Housing over two million objects spanning five millenniums of history and visited by over six million people every year, The Met is considered the world's greatest museum in both collections and popularity.

Despite having the good fortune to live just a short walk away, a proximity that I take advantage of as often as possible, there are still many areas of the museum that I have only passed through briefly or never even visited.  And so, when I was invited to participate in a walking tour called "Meet The Met", I jumped at the chance! 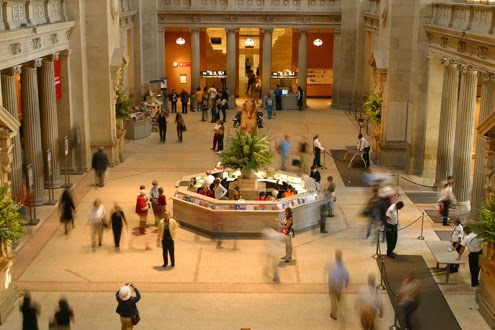 Last Tuesday morning I assembled with five others - two from New York and three from out-of-town - in The Great Hall, where Jason, our guide from Walks of New York, kicked off a three hour exploration of The Met's "greatest hits".

We began at the beginning, in the section devoted to Ancient Egypt where some of the museum's oldest artifacts are on view.  Passing sculptures, vessels, jewelry and sarcophagi, we came to the Mastaba Tomb of Perneb, built around 2300 B.C. and featuring walls decorated from floor to ceiling with colored depictions of the good things that one might like to take along into the afterlife. 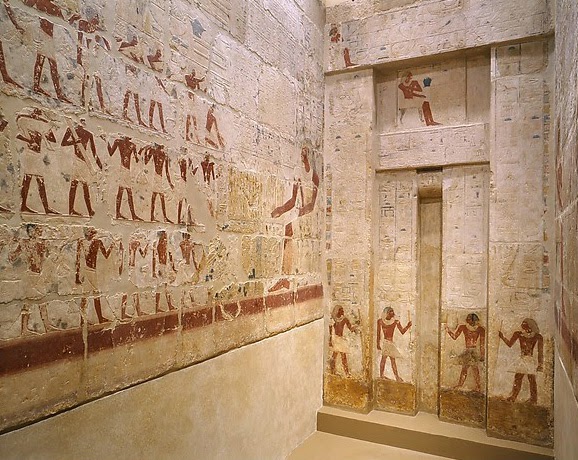 Still in the Egyptian Wing, we visited the Tomb of Meketre (1981 B.C), learned the origins of The Met's unofficial mascot William the blue hippopotamus, and ended up in the spectacular Temple of Dendur.  The Temple of Dendur was constructed of sandstone along the banks of the Nile near Aswan, Egypt, in 15 BC.  Facing the imminent destruction of the Temple with the construction of the Aswan Dam in 1965, the government of Egypt offered the United States the unique opportunity to dismantle, transport and re-assemble one of their cultural treasures.  Today the Temple of Dendur occupies pride of place in the museum's Sackler Wing and is the site of many upscale events and fund raisers. 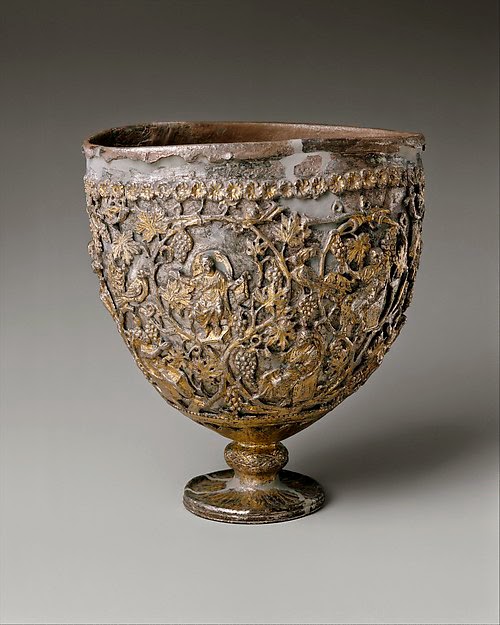 Five hundred years later we found ourselves looking in a vitrine next to the gift shop where the Antioch "Chalice" is humbly displayed.  I confess that I have have passed this unprepossessing, somewhat beat-up silver object countless times without ever realizing that it was once considered to be the actual Holy Grail!

The next stop was the Arms and Armor Collection, where, amid life size models of horses bearing knights in shining armor, we find the actual field armor of England's King Henry VIII.  Forged of steel, blackened, with gilt and etched decorations, the suit was every bit as regal as its oversize wearer.

From Medieval England we crossed to Colonial America and the atrium of the newly restored American Wing.  This beautiful space with its magnificent Tiffany mosaics and decorations features the actual Neoclassical facade of the Wall Street headquarters of the Branch Bank of the United States on the north wall, while the graceful gilded statue of Diana by Augustus Saint-Gaudens is the central focal point.

Zigzagging back in time and through the museum's first floor, we came to The Met's magnificent collection of Greek and Roman Art.  It was fascinating to see how the arts had evolved both aesthetically and technically from the ancient Egyptian models.  Now, for the first time, men were portrayed in marble in all their athletic glory as the human body became something to be admired rather than hidden.

From the Temple of Artemis at Sardis we passed into Melanesia and the Arts of Africa, Oceania and the Americas where wooden artifacts from the Southwestern Pacific are displayed under a ceremonial house ceiling comprised of about a hundred decorated sago palm spathes.

A quick look at the Jan Mitchell Treasury of Pre-Columbian gold objects and we took the elevator up to the roof garden for a stupendous view of Central Park and the New York skyline as well as the special summer site-specific commission by Dan Graham entitled "Hedge Two Way Mirror Walkabout". 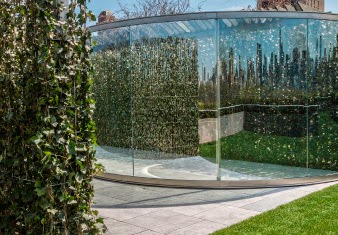 Now was when it paid to have an experienced guide - after nearly two hours of standing, observing and listening, Jason rewarded us with Power Bars and a gorgeous photo op before herding us back down the stairs to begin our circuit of The Met's second floor galleries.

Here the focus was more on paintings, as opposed to sculpture and objects, as we explored some of the highlights of the museum's incomparable collection of 19th and 20th century European art.  We stopped to admire a "blue period" Picasso, Van Gogh's "Wheat Field with Cypresses", and a Rembrandt late self-portrait before arriving in the gallery that houses The Met's astonishing group of five Vermeer paintings.  I say astonishing not only because of their exquisite beauty, but because with only 34 paintings in Vermeer's entire repertoire, The Met has the largest holding of his work in the world. 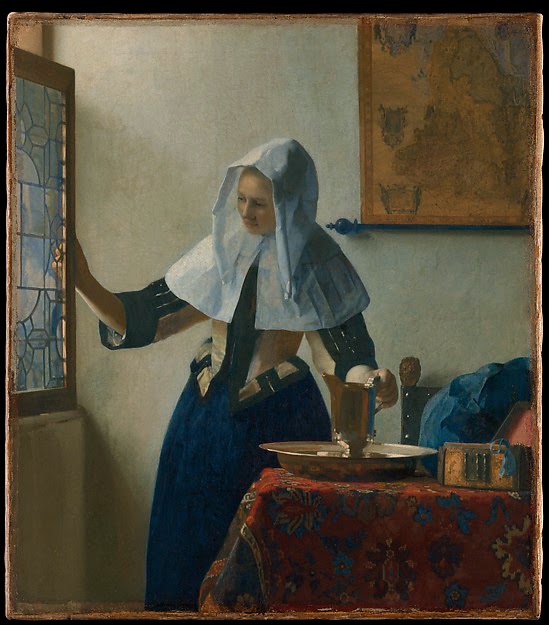 With a quick jog through the Department of Musical Instruments to see a 1939 Martin Guitar played by Eric Clapton, we came to the American Wing and the last stops of our tour.   The penultimate painting was John Singer Sargent's "Portrait of Madame X (Madame Pierre Gautreau)", 1883-84.  This stunning portrait of a "professional beauty" in a black velvet evening dress caused a scandal when it was exhibited at the Paris Salon in 1884.  The sensuality of the pose, the exposure of the shoulder (a strap was later painted on), the extreme whiteness of the sitter's skin as enhanced with arsenic powder, all proved too much for French society and the painting was removed.  It remained in Sargent's own private collection until he died and is one of my very favorite paintings in the museum.

Finally we come to one of the most iconic paintings in The Metropolitan Museum of Art, "Washington Crossing the Delaware".  This massive canvas (it measures over 21 feet wide) was painted in 1851 by the German artist Emanuel Leutze and is actually the second version of the subject - the first was destroyed during a World War II air raid in Germany.  Though the subject commemorates an event of major importance in the American Revolutionary War, it is full of historical inaccuracies.  The actual crossing of the Delaware River occurred on Christmas Night, 1776 but in the painting the sun is shining on Washington's face.  The size of the boat could never have held all the passengers on board, nor could they have stood up, unsupported in the choppy water.  The Stars and Stripes that is so prominently displayed was not designed until 1777 nor do icebergs flow in the Delaware River in the winter.  Nevertheless, it is a stirring painting and was an appropriate ending for our tour. 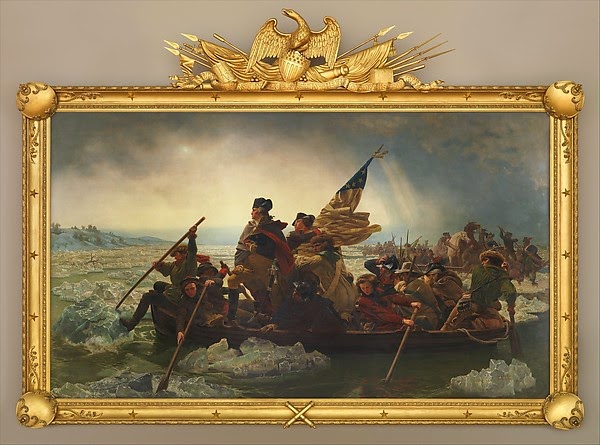 Amazingly, three hours had passed in the blink of an eye.  While I was familiar with many of the pieces we viewed there were many discoveries and Jason's expertise provided many new nuggets of information while refreshing facts that I had forgotten.  The tour was informative, comprehensive and most enjoyable and I would recommend it to both neophytes and museum regulars, visitors and New Yorkers alike.
Posted by Georgina Kelman at 5:34 PM No comments: 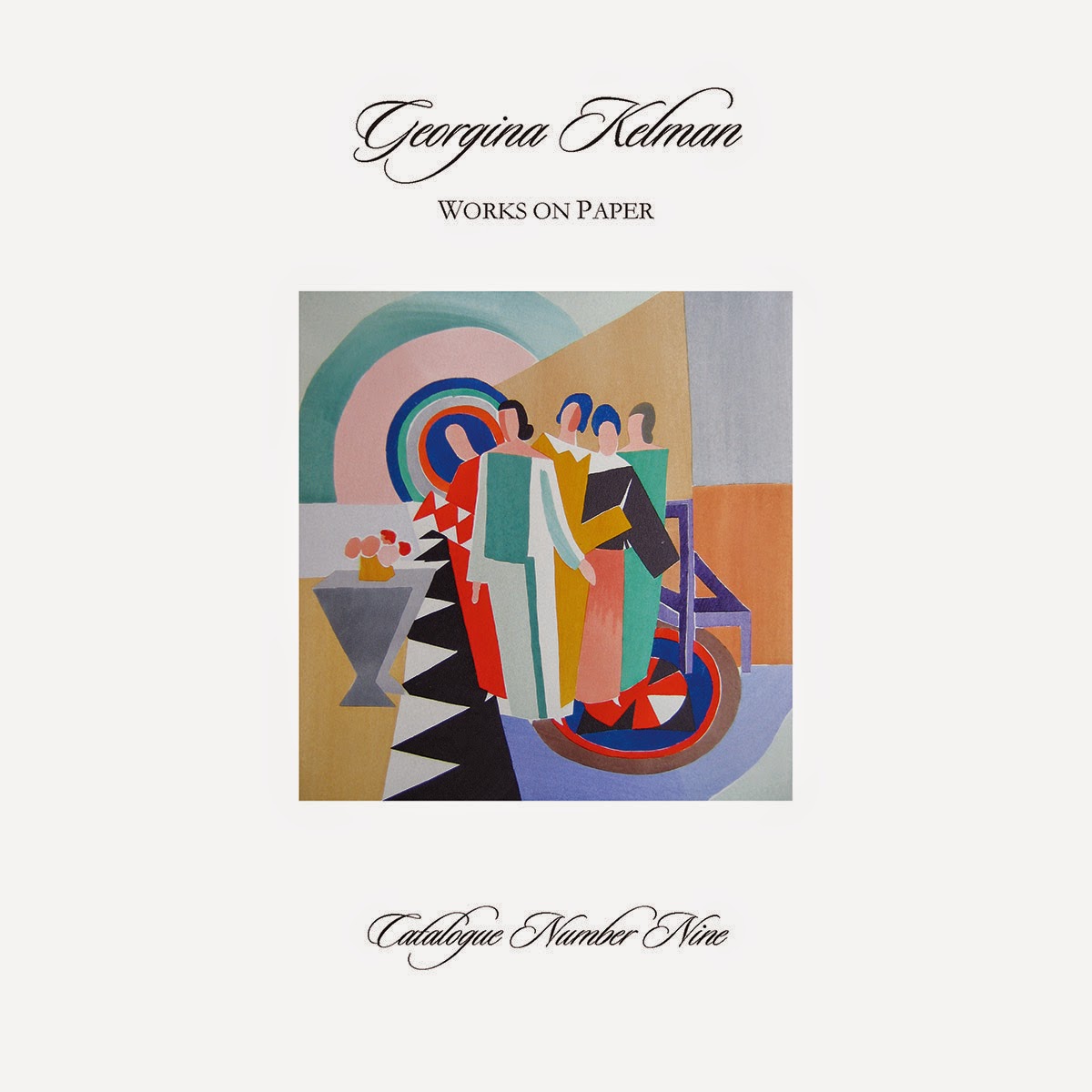 I am pleased to announce the publication of Catalogue Number Nine!  As usual, this year's edition features a select group of European and American, 19th and 20th century fine prints, drawings and watercolors.

Items range from a charming French "carnet de bal" from 1900 with an original etching on the cover to an original Ogden Codman watercolor for the interior of a New York apartment to a pair of lithographs of owls by the American artist Stow Wengenroth.  Each piece has been carefully selected for its rarity, aesthetic appeal and fine condition and there is something for almost every budget.  Please feel free to contact me for your copy.

Fall is definitely in the air here in the North East and a whole new season of art fairs and exhibitions await.  I hope you'll check back often as we explore what's happening in New York, London and Paris and maybe a few surprises as well!
Posted by Georgina Kelman at 5:01 PM No comments:

Alex Colville @ The AGO

When the artist Alex Colville passed away last year at the age of 93, it was the end of an era for the Canadian artistic community and a loss that I felt personally as well.  As I wrote in my blog of August 21, 2013, Alex Colville, beside being one of the most recognized artists of his time, was also the Chancellor of Acadia University while I was a student there in the 1980s.

So it was an especially nice surprise to discover that a major retrospective devoted to his work would be opening at the Art Gallery of Ontario just days before I was planning to visit Toronto.  I left nothing to chance and booked timed-entry tickets for the day of my arrival, then waited in great anticipation for the big date! 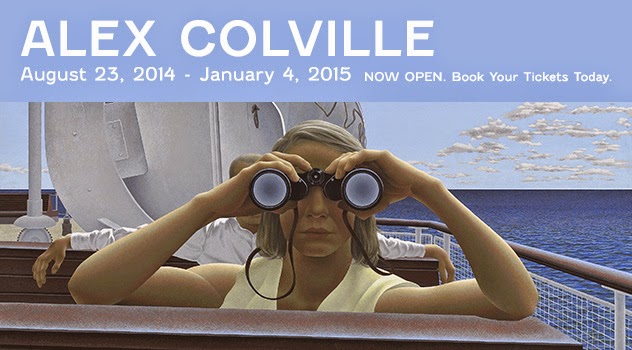 I was so looking forward to seeing the show that I was afraid I would be disappointed, but that was certainly not the case.  Over 100 works from his most iconic paintings to some never before exhibited oils to preparatory sketches and personal photographs filled the large exhibition space on the second floor.  Rather than a chronological survey of Alex Colville's œuvre, the curator, Andrew Hunter, chose to group the works according to theme - World War II, animals, guns, love - which gave visitors a chance to see older and newer works side by side. 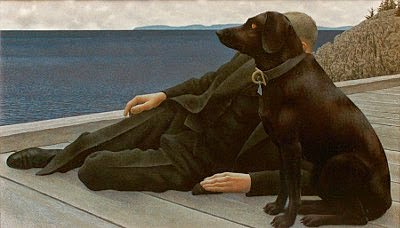 The exhibition is further enhanced by a series of "responses" or "echos" - works by other artists, including filmmakers, writers, painters and a cartoonist, who were influenced by Colville's unique vision. 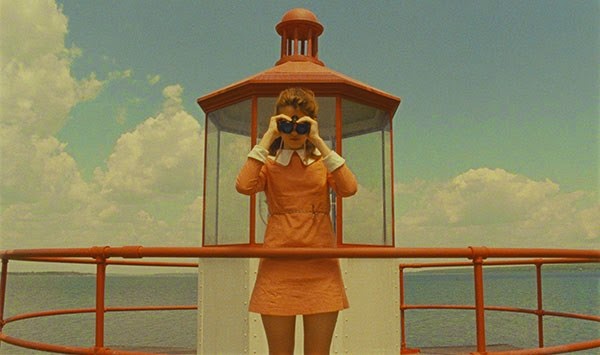 As this major exhibition attests, Alex Colville (1920-2013) was the "Grand Old Man" of Canadian painting.  His singular perspective turned everyday occurrences into situations that were intimate, tension-filled moments of a much bigger story.  Colville's hyper-realistic depictions were, at the same time, part of an imaginary association with a myriad of possibilities confronting the observer. 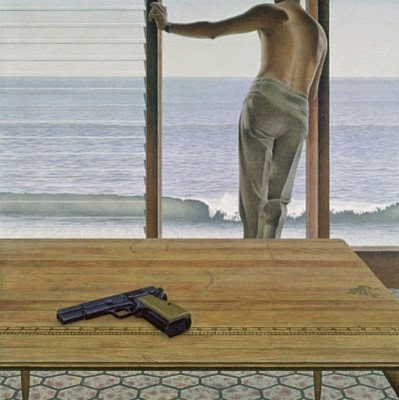 There is, however, one subject that is always very easy to read.  Alex Colville's portrayals of Rhoda, his wife for over 70 years, were always imbued with a warmth and love that is almost palpable, even if the circumstances of the painting are mysterious.  Young or old, naked or clothed, Rhoda was always depicted with a tenderness that comes from years of sharing and trust. 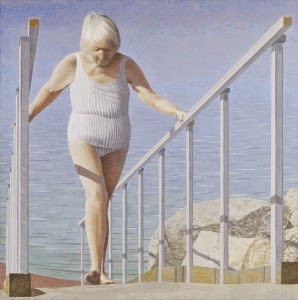 This tribute to Alex Colville, a Companion of the Order of Canada and an artist of international renown, confirms his place in the annals of history as both a superb painter and an outstanding human being.
Posted by Georgina Kelman at 8:56 PM No comments: