When I first read the title of this exhibition now on view at the American Folk Art Museum I thought it must be a typo.  Really, "folk couture" sounds like an oxymoron but I have to admit intriguing at the same time!  Then I put two and two together and realized that the opening of "Fashion and Folk Art" coincided with the recent "NYC Fashion Week" whose runways were just across from the museum at Lincoln Center.

The premise of the exhibition was to commission contemporary fashion designers to create garments using an item, or items, from the museum's collection as inspiration.  It did not presume to elevate fashion design into fine art, nor to make folk art trendy, but to provide an opportunity for cross pollination between these two fields.

From this unlikely proposition came thirteen unique creations drawn directly from the museum's holdings in sculpture, textiles, photography and ephemera.  Objects as diverse as a sailor's tattoo pattern book, a New Mexican carving of a porcupine, a patchwork "star" quilt and an amateur pin-up photograph all served as springboards for these creative designers.  Loosely grouped into four categories including pattern, narrative, disembodiment and playfulness, each costume was an echo of a historical work of folk art transformed into a work of wearable art. 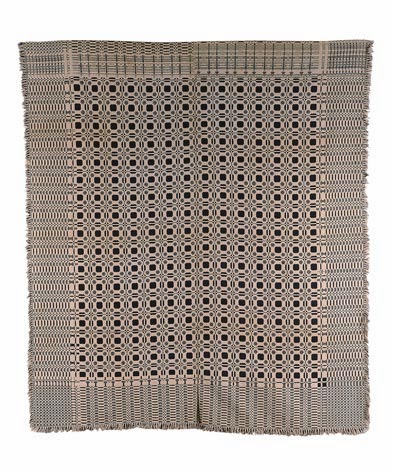 Take, for instance, the "Ann Caril Coverlet" featuring a pattern called "Blazing Star and Snowballs" woven in Westbury, New York, in 1819 and one of the earliest examples of a coverlet that is named and dated in the border.  Introduce Gary Graham, a budding designer, who took the pattern, re-invented it on looms at the Rhode Island School of Design, and created the coat and leggings shown at right. 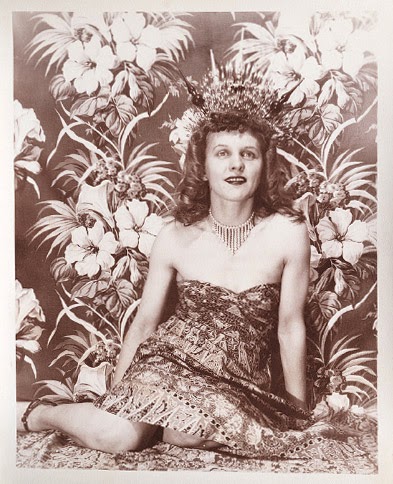 Consider the elegant evening dress by the Chicago design duo Creatures of the Wind based on a photo taken by Eugene von Bruenchenhein of his wife, Marie.  Not only is the beautifully embroidered skirt a repeat of the wallpaper in the photo, but the bodice is reminiscent of the dress that Marie wears in the portrait. 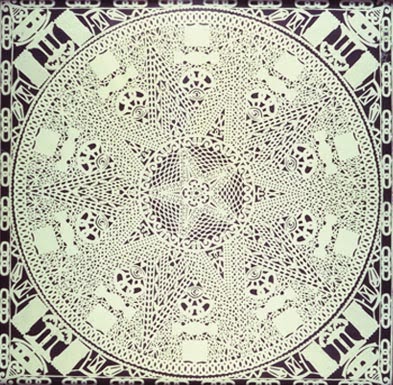 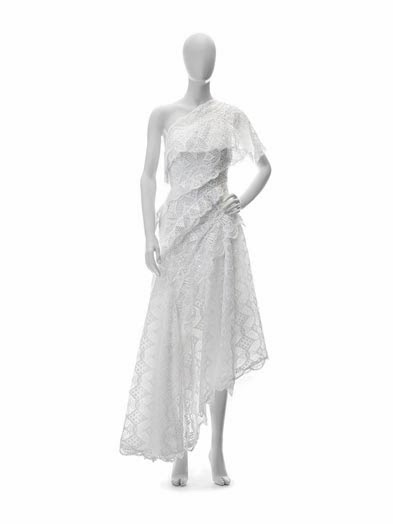 Above is my personal favorite by the established designer Catherine Malandrino who took a turn of the century papercut with Odd Fellows' symbols and turned it into an exquisite hand-crocheted summer dress.  The traditional Odd Fellows' iconography of the three link chain symbolizing love, truth and friendship, combined with the Masonic "all-seeing eye of God" are re-interpreted in this romantic and feminine handkerchief dress.  It is a perfect combination of past and present.

As the publicity for the show states "fashion is cannibalistic" but it is rare, and a welcome relief, to see both established and emerging designers reach into the past for inspiration.  A perfect combination of art and design!
Posted by Georgina Kelman at 8:32 PM No comments:

A Winter Visit to The Met

Between the severe winter weather here in the Northeastern United States, and the on-going renovation of my home office, it's been a bit of a challenge to gather material for my regular blog posts.  But yesterday was sunny and mild and a golden opportunity to finally catch up on what's going on at The Metropolitan Museum of Art.

Although there are no block-buster shows on at the moment, there is a plethora of small but very interesting exhibitions that cover a wide variety of periods and disciplines.  Let's start with one of the major figures of the Italian Renaissance, Piero della Francesca, and a look at what is considered to be his most personal works, his devotional paintings.

When I said "small" I was not being deprecating.  Indeed there are only four rather modestly sized paintings in the show, but together they pack a punch. Not only is it the first time these paintings have been exhibited together, this little group represents almost the entire œuvre of Pietro's private devotional works painted for very special patrons.  Furthermore, the group spans the career of this important artist from a circa 1432 "Madonna and Child" to the 1478 "Madonna and Child With Two Angels [Senigallia Madonna]" shown above left.  These four works, taken together, give real insight into Pietro's development in the areas of perspective, landscape, light, and technical proficiency on a very human scale.

The Photography Galleries are currently featuring a two part exhibition that explores the Paris of the 19th and early 20th centuries.  "Charles Marville:  Photographer of Paris" and "Paris as Muse:  Photography, 1840s-1930s" both showcase a historic look at the City of Light through photographers' lens'.

Charles Marville (1813-1879), one of the pioneers of documentary photographs, was commissioned by the City of Paris to create a photographic record of the changes being imposed by Baron Haussmann under the aegis of the Emperor Napoleon III.  On view are one hundred pictures of streets, buildings, monuments, churches, kiosks and other signs of the disappearing "old" Paris and the "new" modernized version that we are familiar with today.

In the adjoining gallery is a group of forty images by various artists that celebrate the first 100 years of photography in Paris.  These photographs are more imbued with emotion as they capture the feeling and texture of the city's public spaces and private interiors.  Taken together, these shows are a lovely snapshot of a long ago time.

A walk through the Musical Instrument Galleries and their special exhibition of 35 "Early American Guitars" from the C.F. Martin collection brings us downstairs to the Medieval Wing and the Antonio Ratti Textile Center where another small but special show is on view.  For fans of the Aesthetic Movement this is an unusual opportunity to see a fine selection of textiles and wallpapers by William Morris that are normally hidden from light.  Large panels of his beautiful wallpapers are framed and hanging while fabric fragments either created by or inspiring to Morris are in the vitrines below.

All this zigging and zagging, both mentally and physically, brings us to our final stop - the Special Exhibitions Gallery for the Arts of Africa, Oceania and the Americas.  Here we find another small but exquisite show - "The Nelson Rockefeller Vision: In Pursuit of the Best".  Many New Yorkers recognize Mr. Rockefeller as an avid art collector and a great philanthropist, but few realize exactly how great his contribution was to the acceptance of primitive art in mainstream museums.  Here we find a very well selected group of works from Africa, Oceania and the Americas, that were all assembled by Mr. Rockefeller with the assistance of his advisers, the art historian Robert Goldwater and curator René d'Harnoncourt.  What makes this little show so appealing is the inclusion of pages from the original diary of Mr. d'Harnoncourt outlining the "Desiderata and Collection: Nelson A. Rockefeller" with hand-written entries describing the pieces and their importance.  It is this personal touch that makes this tribute to a collecting icon more than just a group of nice objects.

Here ends my long overdue museum report with a hope that it has given you a few topics to think about and a promise to get back into gear before the next snowstorm hits!!
Posted by Georgina Kelman at 8:35 PM No comments: