Looking at "A Revolutionary Impulse" @ MoMA 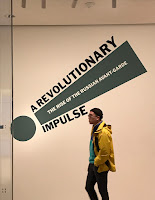 As the centennial of the Russian Revolution approaches, the curators of the Prints and Drawings and the Photography Departments at New York's Museum of Modern Art have combined forces to present an exhibition of avant-garde works created before, during and after this period of intense turmoil.  "A Revolutionary Impulse:  The Rise of the Russian Avant-Garde" looks at how Russian artists bucked tradition by promoting an entire new style of art, one more in keeping with the social and political realities of the period.

With World War I raging in Europe and the centuries old Tsarist regime starting to crack, the time was ripe for a fresh approach to the visual and performing arts.  Artists like Natalia Goncharova... 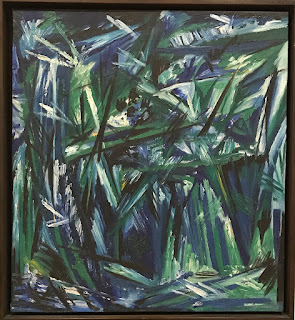 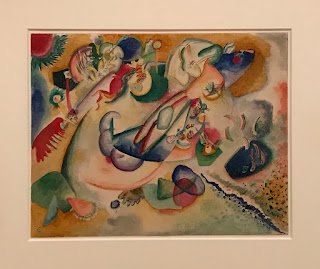 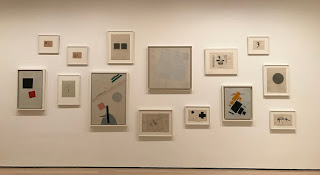 ...rejected classical form and replaced it with a new language - the language of Suprematism.  Art was no longer simply a re-creation of people, places or things, but a completely abstract expression of poetic form that freed the creators and viewers from the confines of reality.


With the overthrow of the Tsar and the installation of Bolshevism, avant-garde artists embraced an even more radical form of expression - Constructivism.  A reflection of the socialist agenda, this contemporary movement was no longer about the individual artist but society as a unit and with that a uniform language of abstraction.  Decorative painting was rejected in favor of more practical objects like posters and dishes that were produced mechanically rather than by hand. 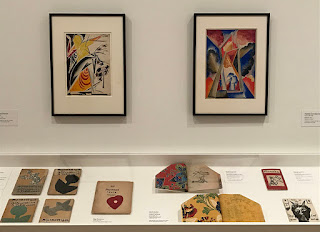 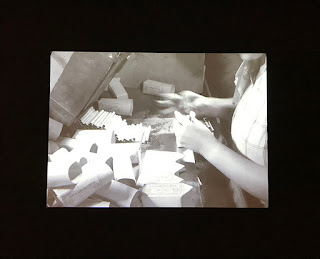 Dziga Vertov "The Man with the Movie Camera", 1929

By the 1930s, when the "democratic" society was not quite as wonderful as people had hoped, Stalin turned to artists to promote the socialist agenda.  Graphic designers like Gustav Klutsis and Sergei Sen'kin were among many who were enlisted to create propaganda posters and pamphlets that glorified the new regime. 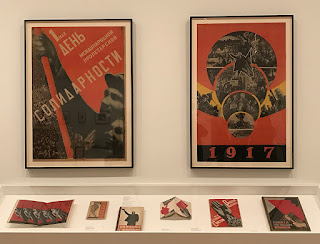 Some of these printed materials are remarkable in their design elements but ultimately the message was one of control.  Artists were no longer expressing their views but advertising for the Soviet power and experimentation was not allowed.   The age of "Socialist Realism" effectively ended the great avant-garde breakthroughs of the early part of the century and Russian artists were reduced to being civil servants rather than arbiters of change.  The rest, as they say, is history.  "A Revolutionary Impulse" can be seen at MoMA until March 12.
Posted by Georgina Kelman at 7:51 PM No comments:

Though born and raised a Yankee, John McLaughlin (1898-1976) is identified first and foremost as a Southern California artist.  So it is entirely appropriate that the Los Angeles Country Museum of Art (LACMA) honor the State's adopted son with a long-overdue retrospective of his "Hard Edge" works.  "John McLaughlin Paintings: Total Abstraction" is a comprehensive survey of the post war geometric paintings for which he is best known and only the third major museum exhibition ever devoted to his work.

Three "Untitled" paintings from the 1950s

While McLaughlin himself freely acknowledged the influence of such Minimalist artists as Piet Mondrian and Kazimir Malevich, it is the art of Japan that had the most profound impact on his vision.  From his childhood spent in the Asian art galleries of the Museum of Fine Arts, Boston, and his later travels throughout Japan and China, McLaughlin absorbed the Zen principals of the void, or "ma", the negative space where one's consciousness can expand. 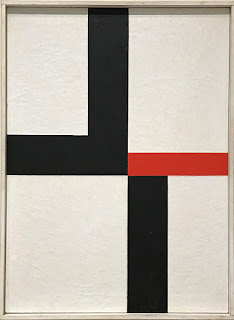 His sharp geometric designs are not intended to represent any type of object or experience, rather they are meant to suggest complete abstraction and with that, the possibility of deep contemplation. 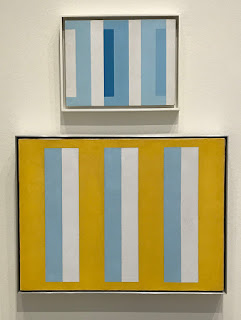 The precise and perfect lines permit the viewer to become immersed in the negative space and ideally develop a more complete connection with nature.  McLaughlin endeavored to push the concept of abstraction to its outer limit, ultimately employing solely the shape of a rectangle as the preferred form and black as the simplest and most powerful color.  By the 1970s McLaughlin's paintings had been simplified to the extreme as he pursued his quest to achieve the void. 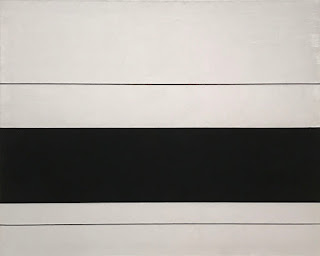 John McLaughlin's obsession with abstraction earned him quite a few accolades during his lifetime and has elevated him to almost cult status among followers of California art.  His work had an immeasurable influence on later 20th century movements such as Light and Space (think James Turrell) and Pop Art (think Ed Ruscha) and continues to inspire to this day.  "Total Abstraction" is on view at LACMA until April 16th.

Leaving the museum during a break in the rain, I passed the site-specific installation by another noted California artist Chris Burden (1946-2015) that has become a landmark for visitors to downtown Los Angeles.  "Urban Light", 2008, features two hundred and two restored cast-iron antique lamp posts arranged in a grid that is almost irresistible to anyone with a camera - myself included! 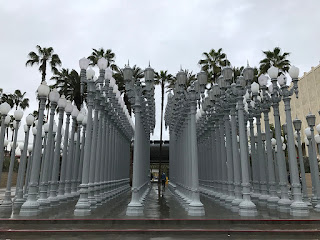 Posted by Georgina Kelman at 5:51 PM No comments:

I really should have listened more carefully to the lyrics in "It Never Rains in Southern California", because at the end of the second stanza the other shoe drops - "It never rains in California, but girl don't they warn ya?  It pours, man, it pours".  And despite my dreams of a sunny few days while exhibiting in the recent Los Angeles Fine Print Fair, the exception proved the rule.  On the plus side, the rains brought an end to California's devastating six year drought and the normally dun-colored mountains were a lush green, but any idea of a quick dip in the hotel's outdoor pool was completely out of the question!

Of course Los Angeles offered plenty of other diversions to occupy my free time and one of the most enjoyable was a visit to the museum and galleries of the Fashion Institute of Design and Merchandising, or "FIDM" for short.  Founded in 1969, FIDM began as an educational institution for students of fashion and costume design.  The Institute now comprises 4 campuses in Southern California, and, since 1978, a museum and library featuring examples of and documentation for all manner of clothing, textiles, ornamentation and accessories, both historic and contemporary, for the movie industry and fashionistas alike.

As well as archives and reference materials, the FIDM Museum also offers fashion-themed special exhibitions that are free and open to the public.  I had the good fortune to attend the preview party for their winter exhibitions which was held in a see-through tent complete with chandeliers and was just as fabulous as you would probably expect!

The main exhibition celebrated the silver anniversary of the FIDM Museum's annual nod to the Hollywood costume industry.  "25th Art of Motion Picture Costume Design" featured wardrobes from several of 2016's outstanding films. Like these disco-inspired dresses from one of the opening numbers of "La La Land"... 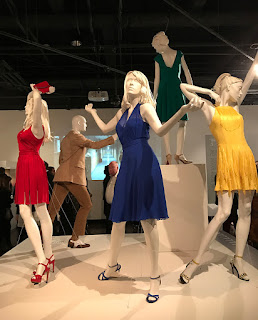 These 1940's style gowns worn by Marion Cotillard in "Allied"... 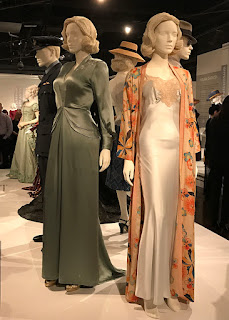 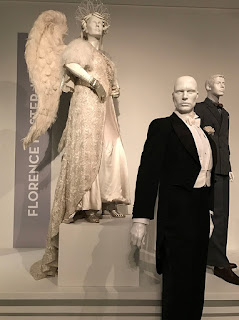 The adjacent gallery was set up as an old-time railroad car from a 1920's movie set.  "Exotica" featured fashion and film costumes from the Roaring 20s with all its retro luxury and glamorous locales. 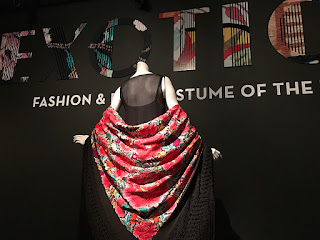 This exhibition highlighted the influence of international dress on movie costumes of the period.  Though not an expansive show, "Exotica" offered choice examples of how foreign clothing inspired Hollywood movie costumes and subsequently American fashions.  Like the Chinese embroidered shawl seen above and the fur-trimmed evening coat below... 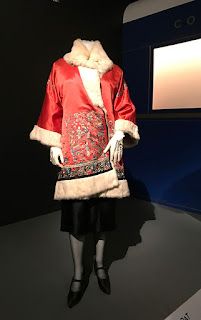 All of the costumes were beautifully presented and excellent examples of fine fashions of the times.  The overall effect was quite impressive and I very much enjoyed seeing a fashion exhibition from a cinematic, rather than a purely historic, perspective.

Naturally, this being Los Angeles, there were quite a few attendees whose sartorial splendor rivaled the mannequins, but most of the guests at the opening party seemed as thrilled to be there as I was!  The exhibitions remain on view at the FIDM Museum and Galleries until April 22nd.
Posted by Georgina Kelman at 8:41 PM No comments: