A highlight of the January cultural calendar is the annual Master Drawings event.  2016 marks the tenth anniversary of this celebration of the art of drawing in all its various forms and styles.  Twenty-nine galleries from New York, Connecticut, Massachusetts as well as several European cities are participating, giving drawings aficionados plenty of tantalizing examples from Old Master to Contemporary.

What's unique about Master Drawings is that it is not held in one location but spread out over the Upper East Side of Manhattan.  Some dealers are fortunate to be able to show in their own galleries while others borrow or share the premises of friends or colleagues.  The result is a sort of pop-up art walk extending from 63rd to 86th Streets and from Fifth to Third Avenues with a surprise to be found at every stop. 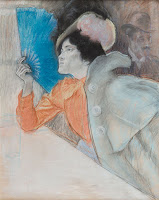 I had the great pleasure to be able to visit a number of dealers on the preview evening, Friday, January 22, just before the big snow storm hit.  What a delight to view the exquisite offerings of Stephen Ongpin Fine Art, London, who brought a superb selection of drawings and watercolors from Tiepolo to Redon, and to discover the lovely French Symbolist works on view with Laura Pecheur, Paris (see Louis Legrand "Elegante with a Blue Fan", 1900, pastel on paper, at right).

Richard Berman Fine Art, New York, deserves a very special mention for the most intriguing venue - inside a vault in basement of a bank - where he showed his beautiful pen and ink Old Master drawings. 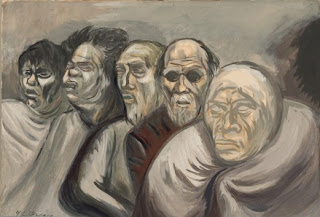 It is always amazing to see the depth and breadth of the drawings genre and this is the perfect way to view six centuries of beautiful works on paper in a variety of elegant locations.  Master Drawings runs until Sunday, January 31.
Posted by Georgina Kelman at 5:35 PM No comments:

After an abnormally warm and snow free winter, New York is getting slammed with "Winter Storm Jonas" that has shut down airports, public transport and almost all business'.  In fact, the State has just issued a travel ban which means that only emergency vehicles are permitted on the streets making the City a real winter wonderland. 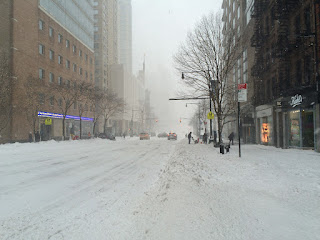 This storm was not a surprise - although its intensity had not been predicted, we knew it was coming and planned accordingly.  That, for me, meant not waiting for the weekend to go across Central Park to the East Side and visit the 62nd annual Winter Antiques Show that had just opened at the Park Avenue Armory.

Once again, this historic, block-large building has been transformed from a working military armory into a posh art and antiques venue with sumptuous floral displays and eighty well-vetted exhibitors presenting the finest in jewelry, furniture, prints, porcelain, carpets and almost anything else you can imagine.

Some of the stands were charming in their overall presentation, like this old fashioned toy store created by Gemini Antiques... 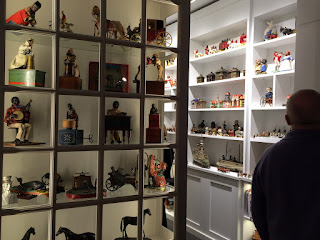 or Elle Shushan's "candy box" of exquisite miniature portraits executed in oil and in wax... 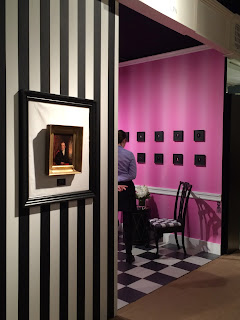 or the elegance of Kadego Japanese Art's simple and calm interior... 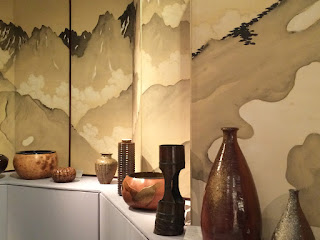 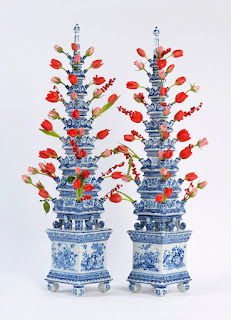 Or these massive Chinese punchbowls dating to the early 19th century and contained in their original case.  Each measures 22" across, is finely decorated with enamel and is inscribed in the center with the insignia of the Masons, Grand Lodge No 1... 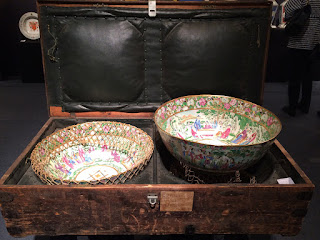 Some booths had some real gems tucked within the overall decor.  Tillou Gallery had a wall decorated with antique ice skates like this pair made in 1860 by Douglas Rogers & Co., Norwalk, Connecticut... 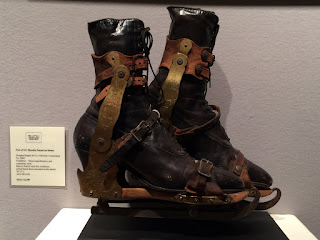 This folk art painting by Anna Marie ("Grandma Moses") Robertson, called "Sugaring Off", 1940-42, was on the stand of Galerie St. Etienne... 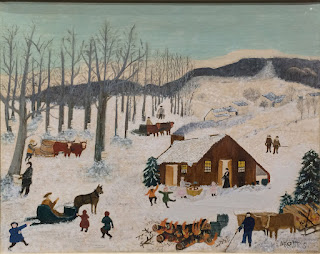 Hirschl and Adler Galleries had this pottery "Poodle with Basket" made in Bennington, Vermont, in the mid 19th century... 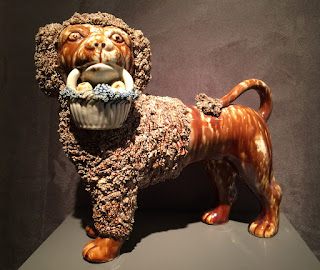 I found this "Pair of Anatomical Studies of a Horse" painted by G. Vifinara in Milan circa 1845 rather bizarre.  They were offered by Thomas Coulborn and Sons...

The Winter Antiques Show always features a loan exhibition showcasing a cultural or historical institution.  This year the honor went to the Wadsworth Atheneum Museum of Art who displayed a selection of treasures ranging from a German "Nautilus Snail", c. 1630 and probably made for a drinking game, to a very early, very tiny, Surrealist painting by Salvador Dali.

I always look forward to the Winter Antiques Show and this year's event seemed particularly fine.  So when the snow starts to melt and you can get out and about, I would encourage you to take a walk over to Park Avenue @ 67th Street and enjoy the many marvels on display.
Posted by Georgina Kelman at 12:31 PM No comments:

New Yorkers who are hoping for some "white stuff" this winter season may have to start thinking outside the box.  One option that is not temperature dependent would be a visit to the Dia Foundation's Chelsea location where an exhibition of the ultimate "white" artist is now underway. 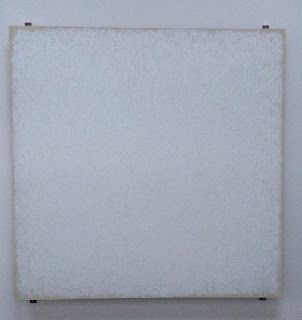 I'm speaking of Robert Ryman, whose white on white paintings caused a sensation in the Abstract Expressionist heyday of the 1950s and, happily, continue to amaze today.  For the first time since his Museum of Modern Art retrospective in 1993, Mr. Ryman's classic paintings are once again on view in a small but spectacular exhibition at the Dia Art Foundation in Chelsea.

The beauty of this show is in its presentation.  Twenty two carefully selected examples of Mr. Ryman's paintings created between 1958 - 2002 represent the range of his work without being overwhelming.  From the early oils on canvas to later enamels on copper, all explore the artist's fascination with white, and more importantly in this exhibition, his obsession with light.  The Dia's curator, Courtnay J. Martin, has installed the works in the foundation's cavernous galleries on West 22nd Street using only the skylights for illumination.  This natural light, light that changes with the weather and time of day, is exactly how Mr. Ryman intended for his work to be experienced - to allow the paintings to "take on a different life" with each variation. 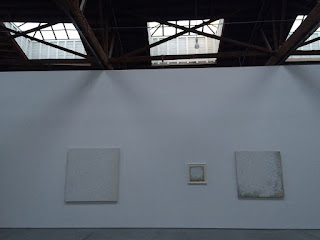 Robert Ryman was born in Nashville in 1930 and moved to New York at the age of 22 to pursue a career as a jazz musician.  A day job as a security guard in the Museum of Modern Art exposed him to the paintings of colorists like Cézanne, Matisse and Rothko, and the rest is history.  Ryman gave up on the saxophone, went to an art supply store and started painting.  His entry into the 1958 MoMA staff exhibition was purchased by a member of the museum's painting and sculpture committee, Mrs. Gertrud A. Mellon, and his career took off. 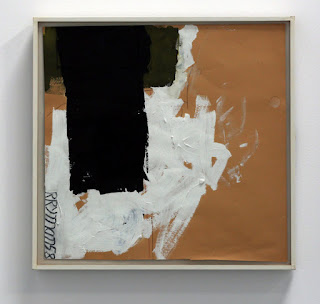 To categorize Robert Ryman's paintings as "white squares" is not doing the artist justice.  To be sure, white is his predominant color and one could say he has a passion for white.  But a close look clearly reveals that white is only one of many colors represented and it is this manipulation of white that makes the works so powerful. 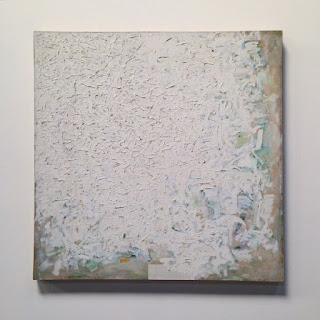 
Ryman did not limit himself to painting on canvas, stretched or un-stretched, but furthered his study of white and of light by experimenting with supports ranging from aluminum to plexiglass.  By the 1970s, Ryman had expanded his research to include the hanging devices that attached the works to the wall.  These structural elements added a new dimension to the works making them almost interactive with the wall and surrounding space. 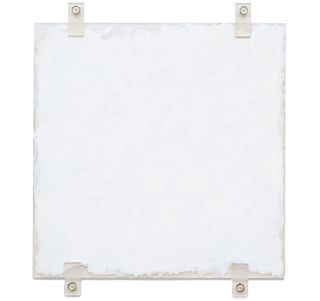 "Arrow", 1976
I had never really given Robert Ryman's work much thought beyond him being the artist who inspired the hugely successful play "Art".  In my defense, his paintings are not often included in exhibitions or seen at art fairs, but they truly deserve more.  Having a chance to see a few really fine works in a customized setting was an opportunity to really try to understand what white and light are all about and that things are seldom what they seem on the surface.

P.S.  No sooner had I posted this blog then the first snow flakes of the season began to fall!  Winter might turn white after all!
Posted by Georgina Kelman at 4:33 PM No comments:

"Storm Women" at the Schirn! 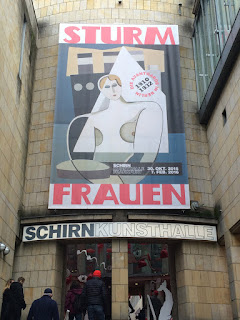 It seems like just a minute ago that we were ringing in the New Year with champagne and fireworks and here we are nearly halfway through January!  I started off 2016 with a quick trip to Frankfurt, Germany, to celebrate the 90th birthday of a very dear friend and colleague, and while there I visited the Schirn Kunsthalle to see their marvelous exhibition "Sturm Frauen" or "Storm Women".

In 1910, the German art critic and composer Herwarth Walden began publication of a magazine dedicated to Expressionist art.  He called it "Der Sturm" and indeed it did cause a storm within the art establishment of the day.  Hugely successful, Sturm expanded into a whole movement including an academy, performance center and a gallery, making it a cultural center not to be missed in Berlin.  Many now famous artists were promoted by Walden including Paul Klee, Marc Chagall and Wassily Kandinsky, but what made this enterprise truly remarkable was that over one quarter of the artists shown were women.

At the time, women were generally considered less intelligent and therefore less interesting then men and the idea of a worthwhile woman artist was absurd.  Herwarth Walden, a great fancier of women (he married four times), did not ascribe to this theory and he included works by women in almost every issue of the magazine or exhibition at the gallery.  Now, for the first time, the Schirn Kunsthalle is putting the spotlight on these "Storm Women" with a focus on eighteen of them, some major names and some lesser known but all got their start with Der Sturm.

Interestingly, many of these women were wives or lovers of artists and while they often had a distinctive style of their own, there are slight similarities to or influences of their partners' work.  Like, for example, Marcelle Cahn, whose work bears traces of Fernand Léger's Constructivism... 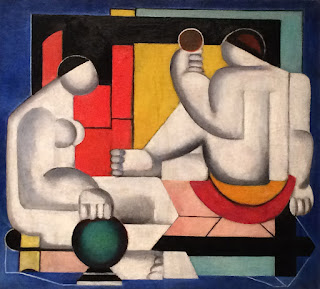 or Gabriele Münter who was married to Kandinsky... 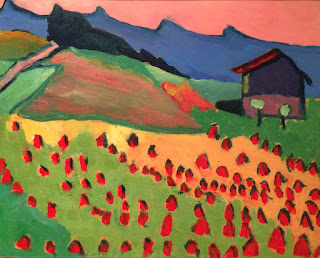 "Landscape with Cottage in the Sunset", 1908

or Sonia Delaunay, who, together with her husband Robert, explored the theory of Simultanism... 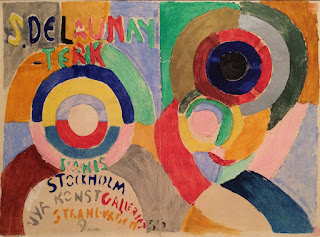 Study for the cover of catalogue of the Stockholm exhibition "Self-Portrait", 1916

Some of the Storm Women worked in the performance arts, like Lavinia Schultz who designed and actually danced in these extravagant costumes.  The first body mask is for "Toboggan Dance", and the second is "Bibo", both created in 1924. 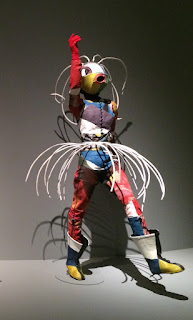 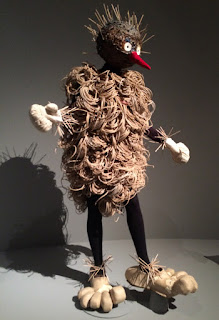 Probably more well known artists in the field include Natalia Gontcharova whose 1914 set design for the ballet "The Golden Cockerel" by Pushkin looks like a Russian fairy tale... 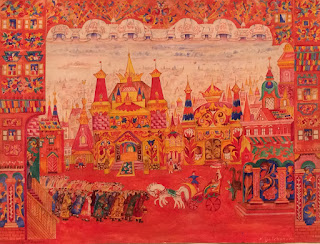 and Alexandra Exter whose wonderful marionettes were exhibited in The Sturm Gallery in 1926.. 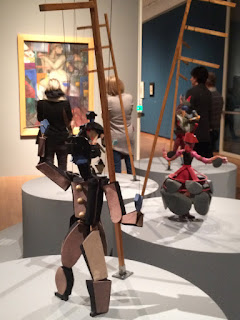 One artist whose work I was not familiar with but was very happy to discover was Marianne Van Werefkin.  Her intensive use of color ranged from the almost Belle Epoque feel of "Ballroom", 1908.. 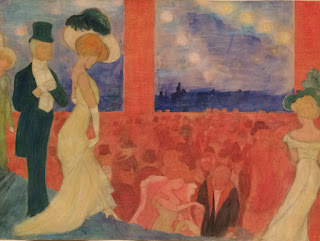 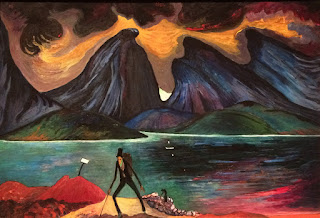 The history of Der Sturm reflects the history of Berlin from the pre and post World War I periods, through the Weimar Republic to the Great Depression.  By the time the Gallery closed and the magazine ceased publication, Herwarth Walden had produced over 200 avant garde exhibitions in Berlin and around the world, many of them centered around women.  In 1932 Walden moved to Russia to pursue a Communist ideal but he came to a sad end under the Stalinist regime in 1941.  Many of the artists he championed went on to great success, some died in obscurity, but all were offered an chance to shine in his unique Sturm universe.  "Sturm Frauen" is on view until February 7, 2016.
Posted by Georgina Kelman at 5:29 PM No comments: