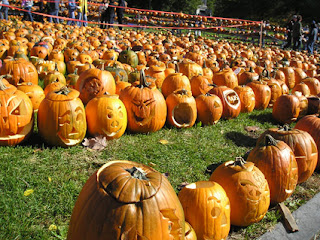 It's that scary time of year again! Time to think of ghosts and goblins, witches and skeletons, pumpkins and candy corn, and there is no better place to celebrate the season than right here in New York City! The festivities are already underway and there is something for everyone, from the littlest fairy princess to the creepiest monster!

This fun starts this weekend with the New York Pumpkin Festival in Central Park! Starting at midday on Saturday, Bethesda Fountain will be transformed into an urban pumpkin patch with face painting and jack-o'-lantern carving for young and old. Benefiting Camp Sunshine, a national retreat for children with life threatening diseases and their families, this is both a great time and a great cause.

If you would prefer something not quite so hands-on, but still somewhat ghoulish, how about a visit to Chelsea to view "I Am As You Will Be: The Skeleton in Art" now on at Cheim & Read on West 25th Street? This wonderful exhibition features over 30 works by a variety of artists each featuring a skeleton as the subject. Ranging from the 19th to 21st Centuries and using materials from pen and ink to bronze, from silk embroidery to actual bone, this exhibition causes the viewer to look at his own basic body structure through totally different eyes. Sometimes macabre, sometimes anatomical, this show offers works by artists as varied as James Ensor, Paul Delvaux (see oil painting on left), Salvador Dali, Andy Warhol and Damien Hirst. It's on until November 3rd and it's well worth the bus fare!

On the big night itself, how about a trip downtown to the mother of all Hallowe'en celebrations, the Greenwich Village Parade? Now in its 33rd year, this festival of costumes and fun just keeps getting better. This year's theme is "Wings of Desire" but don't get hung up on concepts, just throw on a costume and join in the fun - they don't stand on ceremony! The parade starts at 7 - get there early for a good viewing spot and enjoy the spectacle! It's the one day a year you can be whomever you please! BOO!!!!
Posted by Georgina Kelman at 6:43 PM No comments:

Though the calendar says October, the temperature reads otherwise as we enjoy another very mild fall day here in New York. The leaves have barely begun to change color, but the fall art season is in full swing and here are a few fun activities to get you out and about on these lovely autumn days! 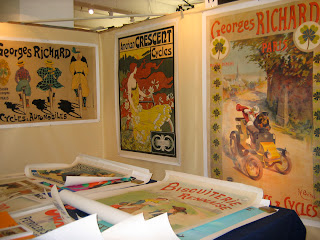 Vintage posters at the stand of
Galerie Documents, Paris

This weekend, Metropolitan Pavilion is hosting The International Vintage Poster Fair. Boasting a selection of over 10,000 original posters on every theme from travel to the Folies Bergères the 25 participating dealers offer poster art for every taste and budget. The choice is staggering and the show is a lot of fun.

Just one block uptown is the West Side Antiquarian Book and Ephemera Sale. Formerly held in the Lexington Avenue Armory, this is the first exhibition in the new location at Metropolitan Pavilion. While not as comprehensive as the New York Antiquarian Book Fair held every April, there is a nice selection from some good dealers and certainly some treasures to be found. 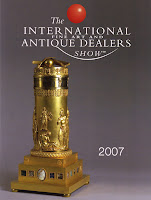 Over to the East Side and the always impressive International Fine Art and Antiques Dealers Show. Once again the Seventh Regiment Armory has been transformed into an elegant salon for fine art and antiques from around the world. Fabergé picture frames, Tiffany lampshades, Ming vases, George III armchairs, Degas pastels...it's all here! Like a mini-Maastricht, the select exhibitors who show at this fair save the best and most beautiful to fill their booths every October in New York. I loved a round side table with the surface entirely decorated with glass beads at Antoine Chenevière, London, a 19th Century model of a cathedral made out of shells at David and Constance Yates, New York, and what home is complete without an 1891 brass and nickel plated signal cannon at Hyland Granby Antiques, Hyannis Port!

There is still time to stroll down Madison Avenue and look in the boutiques, or enjoy an iced tea at an outdoor café, or how about a walk in Central Park to savor these last sweet days before the cold winter wind starts to blow! Life is good - celebrate this fall!
Posted by Georgina Kelman at 4:55 PM No comments: 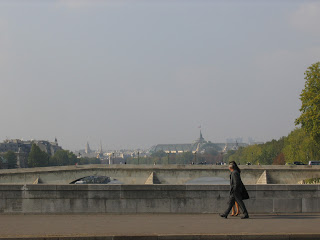 Autumn has definitely arrived in Paris - the chestnut leaves are turning gold and the sun does not rise till after 7:30. The light and sky are crisp and beautiful and the energy of a new season is very invigorating. Despite the abysmal exchange rate, this was a successful hunt for new material, and there were opportunities to visit some terrific shows in between shopping for art.

Very close to Sacré Coeur is a small exhibition space for temporary shows. I had never visited the Halle Saint Pierre, but a friend recommended a new exhibition held in honor of the 100th birthday of Varian Fry. Varian Fry was an American journalist who risked his own life to save hundreds of French Jews and intellectuals from the Vichy regime. Through his dedicated efforts, artists and anti-Nazis were able to emigrate to the United States and to safety. The exposition offers many historical photographs and documents on this man and his mission, as well as a strong group of artworks by the circle of Surrealists whom he helped. Jean Arp, Marc Chagall, Marcel Duchamp, Max Ernst (whom Fry persuaded Peggy Guggenheim to marry to get his exit papers) and Roberto Matta are just a few of the luminaries who owed their survival to Varian Fry. A great man, and a true hero.

Paris is blessed with a plethora of small but first rate museums. The Musée Guimet was founded in 1889 by an industrialist from Lyons, Emile Guimet, to showcase his collection of Asian art. Originally the museum was devoted to the history of religion, but a major renovation about 5 years ago shifted the focus to a more general exhibition of Asian arts and antiquities.

Geographically, the museum's holdings range from India to Japan, and chronologically it covers 5 millenia, so you can imagine there is a lot to see! Even for someone (like me) with a limited knowledge of Asian culture, the collection is impressive. Presented in a stunning contemporary setting are such treasures as a 1st Century stone Bodhisattva sculpture from Pakistan, an 11th Century bronze Shiva Nataraja (Lord of the Dance) from Southern India and a Qing Dynasty 17th Century lacquer panel screen from China. From stone sculptures to porcelain bowls there are beautiful objects to admire in every gallery. 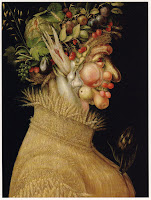 A new exhibition at the Musée de Luxembourg is drawing huge crowds and my wait in line to see "Arcimboldo" was well worthwhile. Giuseppe Arcimboldo lived from 1526-1593. His father, Biagio, was an artist and participated in the decoration of the magnificent Duomo in Milano. Giuseppe also began his career as a religious artist in Italy and later as a painter of portraits for the nobility. He eventually came under the patronage of Emperor Maximilian II of Vienna who was known as a free thinker and encouraged experimental expression in the arts. Arcimboldo flourished in this environment and began to paint fantastic interpretations of traditional themes. His series' "The Seasons" and "The Elements" meld animal and vegetable and human in a riot of color and imagination. "L'Été (Summer)", painted in 1563, features a face of fruits and vegetables and a body of wheat with an artichoke boutonniere. "L'Air (Air)", 1566, has a face and head made of birds and a body of a peacock with the feathers spread. His series on the métiers, or trades, features a librarian made of books and a florist made of flowers. His most amazing portraits are painted in reverse - to be viewed upside down in a mirror! Truly, Arcimboldo was the original Proto surrealist!

The World Cup of Rugby is being played in Paris now and the bars are filled with fans from around Europe cheering their national teams. France is playing a match today and the streets are full of rugby enthusiasts singing the Marseillaise! In a totally different vein, this is also the time for the fashion shows and I had a special opportunity to visit "Tranoï 007" a trade show for ready-to-wear women's fashions being held at the Palais de la Bourse. It's almost like an art fair except buyers are ordering in quantity for the next season. After the show, a dinner was held at the hyper-chic new restaurant "L'Eclaireur" with entertainment provided by Django Reinhardt's grandson. The restaurant is decorated in Fornasetti black and white and is located behind the posh Hotel Crillon and next door to the famous Buddha Bar! The food was terrific, and so were the models who ate there!

The time in Paris is coming to an end. Tomorrow is the big hop across the ocean back to New York and my real world. It has been a wonderful 10 days in Europe both personally and professionally and I thank all my friends and colleagues for making this visit so great. I bid you adieu and till we meet again! A très bientôt.
Posted by Georgina Kelman at 12:12 PM No comments: