In May I visited The Metropolitan Museum of Art's exhibition "American Woman: Fashioning a National Identity" produced in sumptuous style by The Costume Institute. Yesterday I rode the Number 2 train out to Eastern Parkway to visit the sister exhibition "American High Style: Fashioning a National Collection" at The Brooklyn Museum. While not as atmospheric as the Met's production, Brooklyn's 80+ mannequins are dressed in historic and vintage clothing that are masterpieces in their genres.
Over nearly a century, The Brooklyn Museum had assembled a costume and textile collection that numbered more than 24,000 pieces and was incomparable in its range and depth. Due in part to the ingenious "Textile Study Room" and later "Design Lab" the museum provided a rare link between the art world and the industrial and design communities, and, as an added benefit, encouraged fabulous donations by some leading fashionistas of the time.
By the 1960's, the research and educational branches of the Design Lab were moved to the newly established Fashion Institute of Technology in Manhattan. In the past few years the Museum has found the cost of maintaining and preserving these textile treasures to be prohibitive and in January 2009 worked out an arrangement with The Costume Institute whereby the Metropolitan received the entire magnificent collection but Brooklyn reserved the right to borrow back pieces as it wished. The result was a win-win situation for both museums and for the fashions themselves which can now be properly cared for and are more likely to be seen by the public. 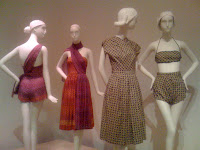 Which brings me to the current exhibition, a sort of "swan song" for the jewels of the collection featuring gowns and accessories by French and American designers from the 1850's to the 1970's. Beginning with the House of Worth and its fully bustled lavender silk taffeta confection created for the Empress Eugénie in 1860, moving through Elsa Sciaparelli's 1939 Surrealist inspired dress and gloves covered with colorful embroidered musical notes, past 1940's beach ensembles by Claire McCardell (see right), and culminating in Charles James' 1955 "Butterfly" ball gown, which, comprising 18 pounds and 25 yards of tulle, is hardly butterfly-like in weight but certainly in form and imagination, there are many fabulous things to see. 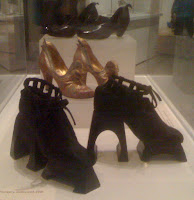 Of particular interest in this show are the occasional "Rarities" on display. Seemingly incongruous with the exhibition, they are often goofy, always fascinating oddities within the historical and social contexts of fashion. I had to smile at the 1920's satin couture dog coat and leash by Galline, the green velvet and cord hat made by John Frederics for Vivien Leigh as Scarlett O'Hara in "Gone With The Wind", the smartly tailored 1940's waitress and milkman uniforms by Helen Cookman and finally laughed out loud at some of the evening shoe designs done in the late 1930's by Steven Arpad (see left).

Historic pieces include a black silk twill gown worn by Queen Victoria in an 1896 portrait family portrait (the only un-sylphlike bodyshape in the show), a group of opulent Russian headdress' from the early 1800's, and a marvelous series of miniature mannequins outfitted in the finest of French couture and sent as a gift from the Chambre Syndicale de la Couture Parisienne as thanks for American generosity in rebuilding France after World War II.

We tend to overlook Brooklyn as a center for culture and fashion, but a show like this reminds us that what is now a borough within New York City, was once a thriving metropolis all by itself and contributed greatly to the arts and sciences. A visit to "American High Style: Fashioning a National Collection" recalls a more glamorous time in the world of vogue and the golden years of this community's past.
Posted by Georgina Kelman at 5:07 PM No comments:

Looking for an author to explore by the pool or beach (or next to your air conditioner) this summer?
Let me share a recommendation I received at a book signing at my local Barnes and Noble about a year ago. I was sitting next to a lady waiting for the event to begin when we started to chat. She was an avid reader and told me about an author that she had recently discovered and couldn't get enough of. After listening to her rave review I wasted no time in ordering a couple of books to see for myself.

I have since become just as much an addict as the lady at Barnes and Noble! Who is this marvelous writer - it's Donna Leon (right) and her series of mysteries set in Venice in the 1990's and featuring the astute Commissario Guido Brunetti as its protagonist.
Ms Leon writes with authority about Serenissima - she lived and worked there for twenty years! Born in New Jersey in 1942, she has also lived in Switzerland, Saudi Arabia, Iran and China. But it is the Italian "City of Bridges" that she chose as the backdrop for her very successful series of crime novels.
Part travelogues and part thrillers, her stories take place within the jurisdiction of the Questura of Venice and involve a diverse cast of characters. Readers accompany the very sympathetic central figure, Guido Brunetti, from the office, the police department with his obnoxious superior officer Vice-questore Patta, his charming and capable secretary Signorina Elettra and his junior officers, through the canals and piazzas to various crime scenes and ultimately home where his aristocrat cum Communist wife Paola and their two teenage children Raffi and Chiara show a much softer side of this seasoned detective.
The crimes and their solutions unfold with careful pacing and beautiful descriptions taking the reader on a tour of Venetian sights and flavors that vividly bring the city to life. Beginning with the first book in the series, "Death at La Fenice", written before cell phones and the Euro, we follow the personae as they track down all manner of criminals up to the most recent novel, "About Face", where the telefonino prevails and the Lira is a distant memory.
Donna Leon's books may not be masterpieces of English literature, but they are very well written and extremely entertaining and I would highly recommend them. I would also like to thank the lady at the Barnes and Noble reading for giving me such an invaluable tip! Buena lettura!

Posted by Georgina Kelman at 11:03 AM No comments:

The Wild West in New York! 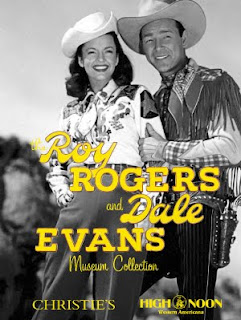 Last week, the mecca of fine art and gentility that is Christie's New York was turned into a Rodeo town from the Wild West! How could the pristine sale rooms where collectors and galleries have acquired masterpieces of art have been transformed into buckaroo heaven? It was the co-auctioneer of the collection of the Roy Rogers and Dale Evans Museum, formerly of Branson, MO.
American Baby boomers grew up with the "King of the Cowboys" and the "Queen of the West". Their radio and television programs, movies, recordings and live shows made them cultural icons and they created a mythical wild west - a simpler time when men were men who rode the range and women kept the home fires burning.
Although Roy Rogers and Dale Evans achieved enormous success in their lifetimes, they both came from very humble beginnings, made worse by the Great Depression. Roy was born Leonard Franklin Slye in Ohio and moved to California to become a singer. Dale began as Lucille Wood Smith in Texas and also earned a living with her voice. The two were married in Oklahoma 1947 and raised a family while continuing to tour and perform. They were outspoken proponents of adoption and devout Christians despite their showbiz lifestyle. Roy and Dale exuded family values and wholesome entertainment - qualities that are sorely missed today.
But let me get back to Christie's and New York. Due to a steady decline in visitors, the family of Roy Rogers and Dale Evans was forced to close the museum's doors in December of 2009 and contracted with Christie's and High Noon, Western Americana dealers, to disperse the collection of memorabilia. And so, last week the trucks pulled up at Rockefeller Center and offloaded the one and only Trigger (stuffed for posterity), Roy's Bonneville outfitted by Nudie the Rodeo Tailor, Dale's "This is Your Life" charm bracelet, various costumes, guitars, photos, awards, Stetson hats, guns and holsters, riding equipment, and merchandise like lunch boxes and posters. Enough lots to take a day and a half to sell, and net nearly $3 million. Heck, Trigger alone brought over a quarter million dollars, and I have it on good authority that the buyer was waiting to take him away, right then and there, in a horse trailer parked on West 49th Street!
It was a bittersweet occasion to be sure. Although this sale was an opportunity for fans of the couple to acquire a treasured memento, it also marks the end of an era. Today's youth are enchanted by a different cast of characters while their parents dream of a more innocent time where cowboys and cowgirls rode the West. And now, Roy and Dale have truly ridden off into the sunset. Happy Trails To You!
Posted by Georgina Kelman at 6:07 PM No comments:

The Declaration of Independence at the NYPL 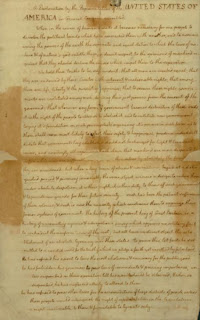 Each July, in honor of Independence Day, The New York Public Library delves deep into its storerooms and brings out its unparalleled collection of the documents that are the foundation of this nation. For a limited time, visitors to the Library's main branch can see one of only two surviving "fair copies" of the complete text of the Declaration of Independence as it was submitted to the Continental Congress with Thomas Jefferson's original notes, as well as several very rare printed broadsides that proclaimed the founding of the United States of America to the citizens of the original thirteen states.
Considered one of the world's great documents and the parent of global democratic movements, the Declaration of Independence remains the cornerstone of American civilization and a testament to the vision of the Founding Fathers. Unfortunately the extreme fragility of the paper prevents them from being on full time display as an inspiration and constant reminder of how the country was born and the tenets of freedom, equality and justice that we now take for granted.
Nothing is perfect, but the United States remains a beacon of liberty, opportunity and democracy that we sometimes disregard. On this Fourth of July holiday, let us celebrate the gifts of this land and remember how fortunate we are to live here. And if you are passing by the Library on Fifth Avenue @ 42nd Street, take a moment to go inside and admire the remarkable document that made it all happen. God Bless America.
Posted by Georgina Kelman at 4:10 PM No comments: