Most of us are familiar with the Surrealist paintings and objects of Salvador Dalí - the melting clocks, the burning giraffes, the baguettes on bicycles - but did you know that he was a master of the moving image as well?

In fact, as the soon-to-open exhibition at the Museum of Modern Art in New York points out, Salvador Dalí was obsessed with film making for most of his career. "Dalí: Painting and Film" looks at the work of this 20th Century icon in a new light by presenting a selection of both his classic paintings, drawings and sculptures alongside the motion pictures they inspired. 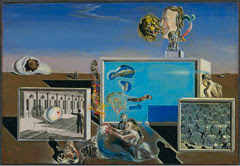 From his earliest silent film with Luis Buñuel, "Un Chien Andalou", 1929, to the animated short "Destino", a collaboration with Walt Disney that was abandoned and finally completed posthumously, this exhibition explores how film influenced his paintings and vise versa. Sometimes creepy, sometimes dreamy, these films are always brilliantly original in iconography and pictorial strategy and a testament to his creative genius. The clever juxtaposition of several Dalí masterworks with the continuously playing videos effectively illustrated just what a multi talented genius he was.

"Dali: Painting and Film" opens next week and will run through the summer. In conjunction with the gallery exhibition, the MoMA theater is offering a series of screenings of both Dalí's own films and those that inspired him. The perfect diversion on a hot summer day!
Posted by Georgina Kelman at 5:30 PM No comments:

It's been a lovely week here in Paris despite unusually cool and rainy weather. The sun did come out on a couple of occasions and the event was celebrated with typical French abandon - every café immediately opened the doors and windows and installed as many tables and chairs as would fit on the sidewalks. Many went so far as to offer large televisions outdoors for the soccer enthusiasts who didn't want to miss a game of the Euro Cup! 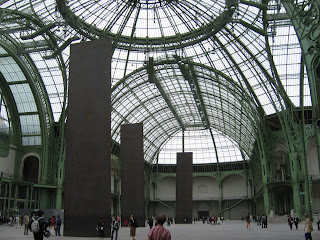 The major art event of the moment is "Monumenta 2008" now in its second incarnation at the Grand Palais. Opened in 1900 for the Exposition Universelle, the Grand Palais is an enormous glass-roofed hall that can accommodate everything from aircraft to horse shows with natural light bathing a soaring expanse of Beaux-Arts metal and glass work. Closed for renovations in 1993, the Grand Palais re-opened 12 years later to rave reviews and has quickly regained its place as the pre-eminent locale for art events in Paris.

In 2007, the French Ministry of Culture initiated a program to invite leading contemporary artists to create site-specific, temporary installations in the nave of this massive structure. The inaugural exhibition was prepared by Anselm Kiefer, and American artist Richard Serra accepted the "Monumenta" challenge for 2008. 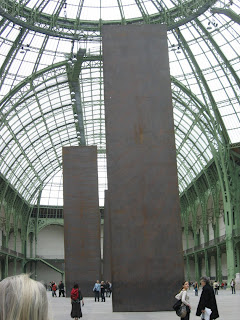 Entitled "Promenade", Richard Serra's installation of 5 huge steel plates on an off-kilter axis is far more complex and involving that you might think. The visitor experiences the sculpture by walking into, through and around the entire field in what becomes an intensely personal examination of space, light, gravity and majesty. The scale of the installation fits the enormity of the space and therefore challenges the viewer to shift perceptions of height, movement and one's unique relationship to the larger space around him. It is at once a public and a private space. One may enter the Grand Palais thinking "what is all the fuss about", but I promise you, you will leave having had a powerful emotional experience.

Richard Serra's "Promenade" is at the Grand Palais until June 15th. His outdoor installation "Clara-Clara", created in 1983, will grace the Tuileries Gardens until November 3rd. 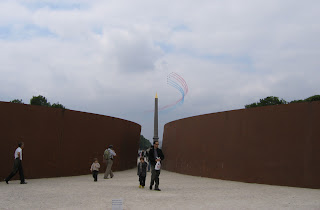 Posted by Georgina Kelman at 9:55 AM No comments:

For 11 months of the year, the small industrial city of Basel sits sleepily on the banks of the Rhine and exudes the kind of tranquility and order the Swiss are famous for. All that changes every June, however, as 55,000 dealers, collectors, curators and art lovers of every ilk descend for the annual extravaganza that is Art Basel. Now in its 39th year, this edition promised to be more than the usual marathon of 300 galleries showing modern and contemporary art, the super-sized installations at Art Unlimited and the various special exhibitions mounted by the city's fine museums. What made the 2008 Art Basel a little different was the near simultaneous opening of the Euro Cup - the continent-wide soccer tournament hosted jointly by Austria and Switzerland.

In order to accommodate the 160,000 rabid soccer fans expected in Basel for the Cup's opening match (Switzerland vs Czech Republic), the organizers of the art fair opted to move up the opening by a week. The city's 62 hotels responded with major rate increases, but the die hard art world types were not deterred and gamely shared over crowded trams, buses and restaurants with soccer fans dressed head to toe in their team's colors!

Neither the sad state of the U.S. dollar, nor the unsteadiness of the stock market proved a problem for fair participants. Sales were generally declared to be "solid" and "very satisfactory" though without the "urgency" seen in prior years. An increase in exhibitors and visitors from newly wealthy economies, such as India, was noticeable and contributed to an even more global atmosphere at the fair.

There was a lot of great art to see at Art Basel, but a couple of booths really stood out. Helly Nahmed, London, featured the complete series of 27 paintings on masonite done by Joan Miro at the beginning of the Spanish Civil War. Many were lent by museums and foundations and it was the first time that these works had been reunited since 1936. Also impressive was the Matthew Marks Gallery, New York, who dedicated the entire stand to a "Special Exhibition Celebrating the 85th Birthday of Ellsworth Kelly".

In the more contemporary galleries exhibiting upstairs in the main hall were several outstanding works by emerging artists. Among the notables were Carmen Perrin's cut out chairs on the theme of "Motifs de porosité (Porous Motifs)" at Galerie Gisèle Linder, Basel, Rashid Rona's huge "Red Carpet 4" photograph of an oriental rug composed of a mosaic of thousands of tiny photos on the stand of Nature Morte, New Delhi, and the beautifully scented hanging sculpture "Before I Swallow You Carrosselflower" by Ernesto Neto at the Galeria Fortes Vallaca, Sao Paulo.

Several of the massive installations exhibited next door at Art Unlimited were also impressive. I especially enjoyed the "viewer participation" pieces such as "Penetrable BBL Bleu" by Venezuelan artist Jesus Rafael Soto, "Garden III (Pine Trees)" by the Yangjiang Group from China, and the showstopper "Staring Into Amnesia" by Qiu Anxiong featuring an original antique passenger train car from China with video clips playing in each window. I know it sounds strange - but you really had to be there! 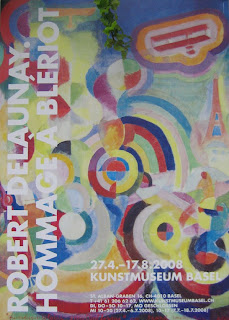 As usual, the city's museums have mounted their most important special exhibitions for this international audience. The Kunstmuseum's dual presentations of Robert Delaunay and Chaim Soutine, though both artists who worked in Paris in the early 1900's, couldn't have been more different.

"Robert Delaunay - Homage à Blériot" presented a very few carefully chosen works that packed an enormous punch. Robert Delaunay (1885-1941) was a pioneer of the avant garde and one of the first modern artists to complete the step from neo impressionism to abstraction via his theory of color effects called "Simultaneous Colour Lyricism". This theory of "Simultanisme" was a collaboration between he and his wife, Sonia Delaunay, and proposed a new language through the representation of of readily recognized images by abstract pictorial concepts created in pure color. The results are visually stunning.

"Soutine and Modernism" is visually stunning as well, but in a totally different way. His heavily worked portraits and still lifes seek to capture the "condition humaine", warts and all. There is a lot of color, but it is more horrifying than beautiful. His paintings of slaughtered oxen are true to life and rather gory in their directness, but fascinating at the same time. 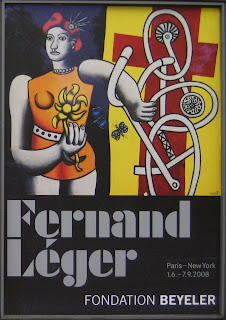 A 15 minute ride on the #6 Tram will take you to Riehen, a small town on the border with Germany and since 1997 home to the Fondation Beyeler. Housed in a Renzo Piano designed building overlooking pastures and quaint Alpine scenes, is an incomparable collection of modern art, the life's work of Hildy and Ernst Beyeler.

Just opened in time for Art Basel is the special exhibition "Fernand Léger: Paris - New York", a look at one of the most significant French modern painters with special attention to the American aspects of Léger's art and his impact on major American artists. Fernand Léger traveled to the United States several times and spent a lot of time in New York completing commissions for American patrons such as Nelson Rockefeller. His fascination with American themes of modernity, architecture and dynamism is clearly reflected in many of his works such as "The Divers", 1943, and "The Construction Workers", 1950.

His is also credited with influencing American artists, particularly of the Pop Generation. To illustrate this point the curators have juxtaposed various of Léger's paintings with works by other artists. For example, Léger's "Les deux cyclists, la mère et l'enfant", 1951, is hung next to Ellsworth Kelly's flags "Blue, Black, Red, Green", 2000, Léger's "Composition architecturale sur fond bleu", 1952, is paired with Frank Stella's sculpture "The Grand Armada", 1989, and the clearest comparison, "La partie de campagne", 1952-3, is mirrored in "Stepping Out", a 1958 work by Roy Lichtenstein.

It's been another art-filled few days here in Basel. Despite the cool, cloudy weather the art world continues to shine and the excitement of participating in this "Carnival of Art" is undimmed. Now it's on to Paris where more adventures await! A bientôt! Bis bald! See you soon!
Posted by Georgina Kelman at 1:10 PM No comments:

What happens when 160,000 fans converge on a small town for the opening of the European Soccer Cup? Fussball fever breaks out! It's a national epidemic here in Switzerland, but nowhere more prevalent than in Basel where the month long competition kicks off (literally) Saturday evening in a game between the host country and the Czech Republic.

Rain or shine, the stadium and the "Fan Zones" will be packed with spectators and huge television screens have been installed on the sides of the Wettstein Bridge for passersby and viewers seated on bleachers set up on the banks of the Rhine. 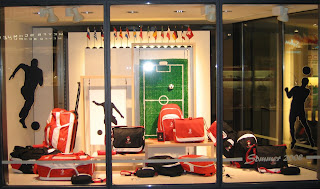 A leather goods shop window features
a soccer field and bags in the national colors! 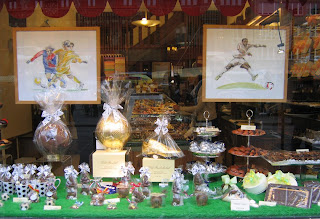 Even the wine shops get into the act
featuring products from the host countries,
Switzerland and Austria 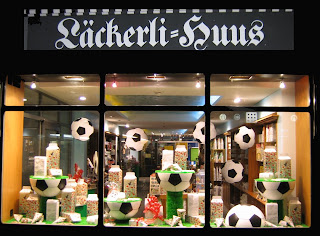 The Basel specialty of "Läckerli", a sort of gingerbread,
is not immune to soccer madness! 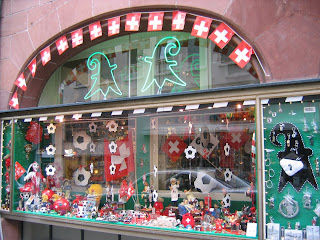 Souvenirs of every kind encourage us
to root for the home team!

As you can see, everybody has gotten into the act and the normally staid shop windows have been transformed into national bill boards! It is a sight to behold, and the excitement is contagious! HOPP SCHWIITZ!! 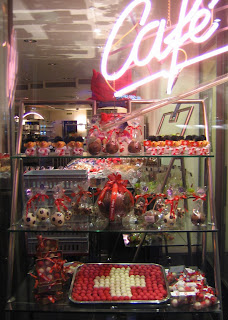 Posted by Georgina Kelman at 1:07 PM No comments: