The Great Sport of Lawn Bowling!

What do Sir Francis Drake, George Washington and me, Georgina Kelman, all have in common? A love of the game of lawn bowling! Though often confused with boules, bocce and pétanque, lawn bowling is its own distinct sport whose origins can be traced back to 13th Century England. It remains popular throughout the British Commonwealth countries and has a devoted following here in the United States as well.

Legend has it that Sir Francis Drake was in the middle of a game of bowls when it was announced that the Spanish Armada was coming to invade. Sir Francis then did what any self respecting bowler would do - he finished his game and THEN boarded the Revenge to pursue the enemy ships up the Channel!

The game was introduced to the New World at about the same time with the arrival of the Dutch in what is now Lower Manhattan. In 1664 the British built a proper bowling green in the spot where the U.S. Customs House now stands. It became the first public park in New York and the new United States, and was maintained by lawn bowling enthusiasts for the annual rent of one peppercorn. The park remains known as "Bowling Green" although it has not been used for bowls for many years. Our first president was so enamored of the game that he had a green installed in Mount Vernon for his own recreation. 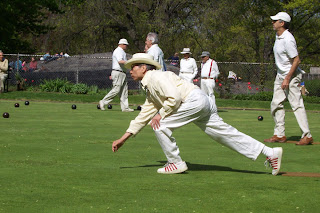 But what exactly IS lawn bowling? The object of the game is to roll a ball (called a "bowl") so that it comes to rest closest to a little white target ball (called a "jack") at the far end of the "rink" (a section of lawn measuring 120' long x 15' wide). Teams play against each other in singles, doubles or triples games. After all the bowls (usually 4 per player) are delivered, the team with the bowls closest to the jack scores. Then the jack is re-set and the next end begins. Sounds simple, right?

Oh yes, I neglected to mention the the bowl is a 3 1/2 lb ball that is flat on one side so it does not roll in a straight line! Lawn bowling is a relatively easy game to learn, but a difficult game to master. Beginners are often amazed at how quickly they grasp the basics, but that confidence disappears just as fast as the intricacies of the game with the funny-rolling balls becomes apparent! I can tell you from personal experience, once you're hooked, you're hooked and there is no better place to be on a summer afternoon than out on the green playing bowls!

New Yorkers are fortunate to have a wonderful lawn bowling green and club right in Central Park. The New York Lawn Bowling Club has been been in existence since 1926 and its members are a diverse group of men and women who share a passion for this addictive activity! It may not be a cardiac workout, but it's a lovely way to enjoy the outdoors and play a friendly game with some nice people. I encourage you to give it a try, there are lawn bowling clubs all over and we love to initiate new players! But I warn you - the sport is habit forming! 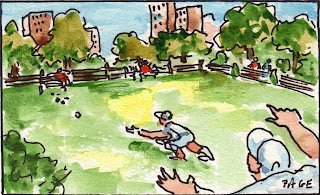 A Visit to the Cape Cod Museum of Art

Even the most dedicated beach goer needs a little break from the sand and sun, and what better place to spend the couple of hours between your lunchtime lobster roll and high tide than the charming Cape Cod Museum of Art? 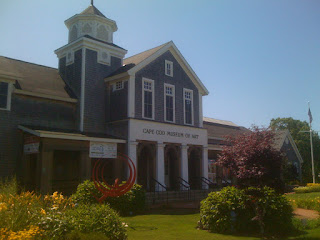 Located in the historic town of Dennis on the Bay side of the island, the Cape Cod Museum of Art is part of the Cape Cod Center for the Arts, an idyllic 20-acre campus which also comprises the Cape Playhouse, Cape Cinema, and a sculpture garden.

Naturally, the focus here is on local artists both native born and those who have adopted the Cape as their home. The exhibitions are constantly changing to present both special shows and to ensure that the museum's own collection is given ample visibility. Summer 2009 presents "Philip Koch: Experiencing Nature, Inside and Out" a mid-career retrospective of the work of this New York State artist who resides on Cape Cod.

Philip Koch "The Song of All Days" 2008
Mr Koch's paintings are deeply colored, abstract yet realistic landscapes that seek to re-interpret traditional, romantic 19th Century views of America. His technique of applying thin layers of rich color on a hard background like masonite or panel (instead of canvas) makes the images appear both true to life and supernatural at the same time. The works are visually stunning and are a testament to the enduring appeal of landscape painting in a contemporary age. 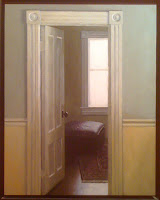 We move from the great outdoors of Philip Koch to the cloistered rooms of Nick Patten. This special exhibition, appropriately titled "Interiors", presents a choice selection of Patten's detailed, intensely private views of furnished spaces within a home (see left "Tucked Away", 2007). Mr. Patten's desire to "bring a quiet drama to everyday scenes" is achieved with his carefully staged and meticulously painted oils. I left with a feeling of voyeurism that was fascinating but not entirely comfortable!

It is a sad reality that very often, much of a museum's permanent collection remains in deep storage, unseen by the visiting public. It is laudable that the Cape Cod Museum of Art makes an ongoing effort to exhibit art that might not be regularly displayed. This year's "Cape Cod Summer" is part of that endeavor and it presents works by a variety of artists, both living and dead, all with a tie to the Cape. Representing artists ranging from ornithologist J.J. Audubon (his "Wild Turkey" etching is of a native bird) to American Modernist Blanche Lazzell, Dadaist George Grosz (now THAT was a surprise!) to contemporary marine artist William Davis (see below) - the museum's curator presented an enticing look at what treasures are hiding in the vaults!

After a walk through the Yasuna Denny Sculpture Garden it was time to head back to the beach! I'd had my art fix and the salt water was calling! It's been a glorious few days here on beautiful Cape Cod - days to remember when summer in the city really strikes and the refreshing feel of a sea breeze is but a fond memory. 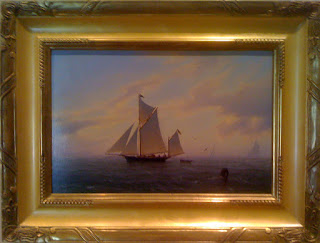 Treasures from the National Museum, Kabul, at the Met 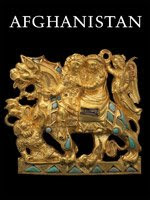 With all that's in the news these days about Afghanistan and the turmoil in the region, it's refreshing to be able to visit a long ago time when Central Asia was home to a stable and thriving civilization that supported a mix of cultures and influences. A visit to the Metropolitan Museum's current exhibition "Afghanistan: Hidden Treasures from the National Museum, Kabul" will lead you to discover the glory of the ancient empire and make the prevailing state of affairs even sadder.

The exhibition presents archaeological riches unearthed from four sites and spans Afghan history from 2200 BC to 200 AD. Many of these artifacts had been carefully hidden by the curatorial staff at the Kabul Museum to save them from probable destruction in the 1980's. In 2004, the crates were re-opened, and to everyone's relief the works had survived intact.

We begin in the Bronze Age at the site of Tepe Fullol where fragments of hammered metal and gold objects attest to a highly developed civilization and accomplished artisans. Next we come to ruins from the Greco-Bactrian city of Al Khanum featuring elaborately carved stone pillars and architectural details that reflect the Hellenic heritage of its founders.

The center of Begram was a major intersection located in the heart of The Silk Road, the collection of land and sea trade routes that connected China to the eastern Mediterranean. A wide variety of precious goods including silk and lacquer from China, rubies and ivory from India, horses from Mongolia and carpets from Persia traveled in caravans from market to market. In the 1930's and 40's, French archaeologists discovered a cache of artifacts dating to the Kushan Dynasty (100-300 AD). Several of these exquisite objects are on display here including ivory statues of voluptuous women wearing Indian-style dress, decorated glass vases and vessels (see above left) and a metal aquarium.

Finally we come to Tillya Tepe, literally "hill of gold", an early settlement in the northern area of Afghanistan. This part of the exhibition will take your breath away! In 1978 a team of Soviet-Afghan archaeologists discovered a series of tombs holding a wealthy nomadic family and their treasure of gold. Stunning jewelry, ornaments, knife sheaths, a folding crown (see right) and even shoes - all crafted of gold and much inlaid with turquoise and other semi precious stones. The craftsmanship and sophistication of design are amazing as is the sheer luxury of these items intended to accompany the deceased into the afterlife.

It is a testament to international cooperation, both during ancient times with the cross-cultural influences on the design of these objects, and currently that an American institution is hosting such an exhibit. I found the exposition spectacular and hope you get a chance to visit. "Treasures from the National Museum, Kabul" is on view until September 20.
Posted by Georgina Kelman at 4:18 PM No comments: