What's On in Paris - Part III

Of all the Surrealist iconography that has entered the mainstream, I would venture to say that one of the most recognizable is René Magritte's man in a bowler hat.  Witty and thought provoking, the Belgian artist's often used motifs include pipes, curtains, words, flames and eggs, endlessly arranged and re-arranged in his quest to get the viewer to see things in a different way.  While some critics feel that Magritte's art is "Surrealism Light", an exhibition now on at the Centre Pompidou makes a very good case that his seemingly simple imagery is not quite as naive as it may appear. 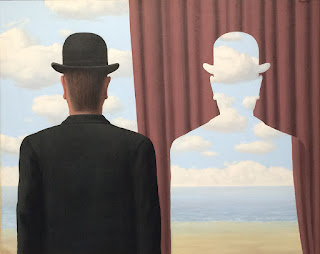 "Magritte:  The Treachery of Images" presents this master of Modernity in an entirely new light.  For the first time ever, a significant body of work by René Magritte (1898-1967) is viewed through the lens of antiquity and philosophy.  Paintings both familiar and obscure are shown in relation to the theme or formula carefully considered by the artist in its conception.

For example, consider the role of words in the world of René Magritte.  While his word paintings may be the genre most closely aligned with the Surrealist Manifesto of accident and shock, they are also very thoughtfully constructed images designed to solve a problem.  When confronted with a written word and an image that has nothing to do with the word, the viewer is presented with a conundrum.  In his paintings, Magritte seeks to both present and solve the problem by methodically reconciling the object, its implications and its potential. 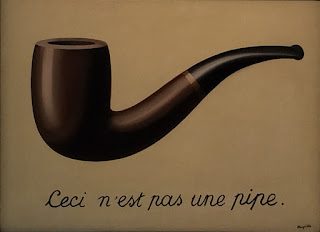 One of Magritte's most well known works is this seeming contradiction between the object and its written description.  Obviously we are looking at a pipe so it is silly to say that it is not a pipe, except that it is not a real pipe but a painting of one.  We are challenged to reconsider our interpretations and assumptions and generally "think outside the box", to use 21st century vernacular. 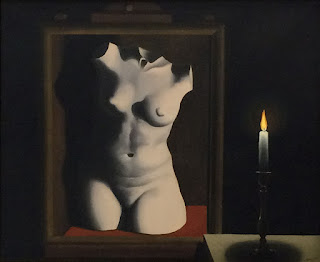 Another common motif used by Magritte is the shadow.  Influenced in large part by the writings of Pliny the Elder in his opus "Natural History", Magritte uses the shadow cast by a candle to outline an image that may or may not be what we think it is.  Does the image cast by the shadow accurately represent the reality?

Similarly, consider the motif of the curtain.  According to Pliny the Elder, the painted curtain was the perfect expression of painterly illusionism and the artists of the Dutch Golden Age and Renaissance often employed this device to insulate their perfectly realized trompe l'œuil still lifes from the rest of the canvas. Magritte also used a painted curtain to set the stage between reality and his interpretation thereof. 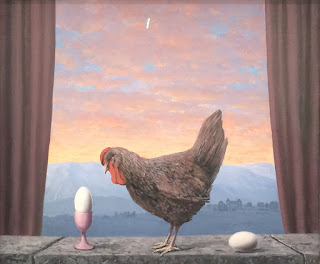 A variation on the curtain is the shroud.  Here we see two figures whose heads are covered in fabric obscuring their faces and making them unidentifiable.  The imagery stems from a very personal experience for the artist when his mother's body was recovered from the River Sambre after she had drowned herself, but it also relates to a canvas revealing the impression of an absent face. 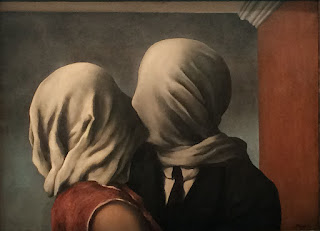 Or, consider the allegory of the cave.  Plato himself asks us to imagine prisoners confined to a cave who mistake shadows for reality.  Is this a reference to our imperfect perception of reality?  Our desire for something other than what is real?  Magritte uses the element of fire and shadows it casts within a confined area, like a cave or a room, to test the boundaries of what is real and what is in our imaginations. 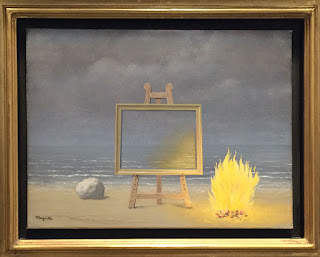 Finally, stepping away from philosophy and turning toward antiquity, we come to the exploration of size and scale - the "spirit of measurement" - and the quest for perfection.  Sculptures of classically beautiful figures are almost always imperfect, think of Venus missing her arms and legs.  The ancients realized that humans were not perfect and that perfection could only be achieved in a collage of details pieced together to form a whole.  Magritte adapted this theory to create his own Surreal Venus comprised of different sized parts to create his ideal form. 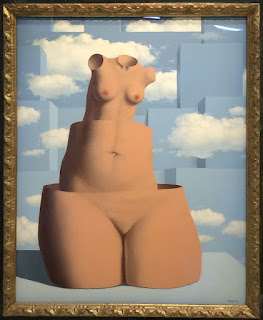 While there is no question that René Magritte is considered a Surrealist, he was far more a disciple of philosophy than poetry.  He himself was an enigma within artistic circles with his devotion to the ancients and his quest to both pose and solve problems through imagery.  Nevertheless, the art of René Magritte endures as some of the most recognizable and most contemplative works of the 20th century.
Posted by Georgina Kelman at 8:56 PM