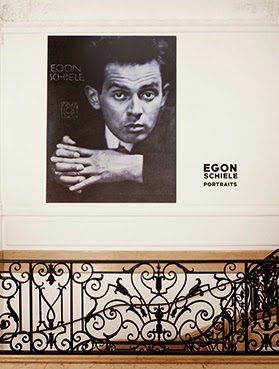 Located on Fifth Avenue at 86th Street on Manhattan's Museum Mile is the elegant Neue Galerie, a private museum dedicated to showcasing German and Austrian art and design of the early twentieth century.  With an unrivaled permanent collection of masterpieces of fine art by Gustav Klimt, Alfred Kubin and Oskar Kokoschka and decorative arts by Dagobert Peche, Josef Hoffman and Koloman Moser, among others, the museum also mounts important temporary exhibitions in its third floor galleries.

Now on view is a very special show focusing exclusively on the portraiture of the Austrian Expressionist painter Egon Schiele (1890-1918).  Under the curatorship of noted Schiele scholar Dr. Alessandra Comini, 125 drawings, watercolors and paintings have been assembled from major public and private collections, all on the theme of portraits.  These are divided into six sub-sections including "Family and Academy", "Fellow Artists", "Sitters and Patrons", "Lovers", "Eros" and "Self-Portraits and Allegorical Self-Portraits" that trace the evolution of Schiele's artistic style.

Schiele's life and career was short but dramatic.  Considered a strange child he was also thought to have had inappropriate feelings toward his younger sister.  At the age of 15 he lost his father to syphilis and Egon went to live with his uncle who reluctantly allowed him to pursue his love of drawing with formal lessons.  Schiele's works from this time are very traditional and academic (see left, "Selbstporträt", 1906), a far cry from the style for which he would eventually become famous!

By 1907 he had met and come under the influence of Gustav Klimt and other members of the Wiener Werkstätte and he began to incorporate the angular, almost distorted and disturbing aspects that came to typify his work.  His portraits were studies in pathos - souls exposed for all the world to see - often suspended in space.  Whether naked or clothed, his sitters were captured in a frank gaze that seemed to expose their innermost, most private, thoughts. 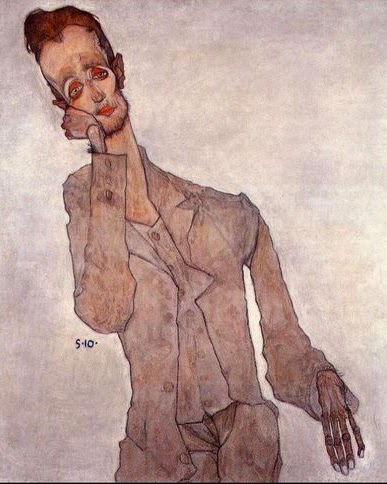 "Portrait of the Artist Karl Zakovsek", 1910


After his release from jail Schiele's work took on a darker, more melancholy side.  He began to paint young urchins from the street and army officers and prisoners of war during World War I.  He also began to portray himself as an allegorical figure - as a monk, a hermit, or a saint - perhaps to convey his feelings of isolation during his incarceration, or his rebirth after being set free.

It should come as no surprise that Egon Schiele had quite an active love life which he depicted in full graphic detail in drawings and watercolors.  Despite this seemingly insatiable appetite for sex, Schiele had only two main women in his life, Wally (Walpurga Neuzil) his first great love and the subject of many paintings and drawings, and Edith Harms whom he met in 1914 and married one year later.  Although this was a union conceived for his own advantage, and he was shocked when Wally did not stick around to continue an affair, he did finally love his wife and behaved as a proper husband. 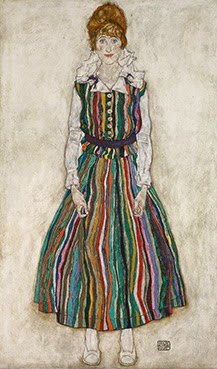 "Portrait of the Artist's Wife, Standing
(Edith Schiele in a Striped Dress)", 1915

Edith fell victim to the Spanish Influenza epidemic that swept Europe toward the end of the Great War.  She was six months pregnant when she died.  Egon Schiele also succumbed three days later but not before completing a few last sketches of his wife.  By the age of 28 he had lived a meteoric life which has gone on post-humously to achieve success beyond even his wildest imagination.  "Egon Schiele: Portraits" is on view at the Neue Galerie until January 19, 2015.
Posted by Georgina Kelman at 6:13 PM