Double Delights at The Frick!

The Renaissance painter Piero della Francesca (1411/13-1492) enjoyed considerable acclaim during his lifetime and his beautiful altarpieces were commissioned by aristocrats and ecclesiasts across Italy.  But for all his success, he never forgot his home parish of Borgo San Sepolcro in Tuscany where he returned in 1454 to begin a series of panels for the altarpiece in the Church of Sant'Agostino.  The project took fifteen years to complete and the end product comprised a central panel and four panels on the wings decorated with images of Augustinian saints, some full length and some bust-size, and a depiction of the Crucifixion.

Despite Piero's mastery of portraiture, especially in his renderings of biblical figures, his stature as "home town hero" faded quickly and a less than a century after its completion the altar was ordered dismantled by an order of nuns who had taken over the church.  Although many of the panels were completely destroyed we are fortunate that several were saved and preserved by a local family.

Fast forward to the late 1800s when the National Gallery in London exhibited three works by Piero della Francesca and sparked a renewed interest in the brilliant work of this painter.  It didn't take long for wealthy American collectors to enter the chase to acquire these rare panels with Robert Sterling Clark (of the Singer sewing machine fortune), investment banker Robert Lehman and stockbroker Carl Hamilton winning the prizes.  Mr. Hamilton was forced to sell his panel of the Crucifixion scene and it was John Rockefeller Jr. who paid the record setting price of $375,000 to acquire the piece.  Eventually the Piero owners club expanded to include Helen Clay Frick (daughter of Henry Clay Frick) who was mad for the Italian Renaissance and obsessed with the desire to include this master's work in the collection.  She was eventually able to purchase three of the panels from the altarpiece and the Frick's holdings expanded again with the donation of the Crucifixion panel by Mr. Rockefeller in 1961.  Today the Frick is the largest repository of Piero della Francesca paintings outside of Italy.

Which brings me to the exhibition now on view.  "Piero della Francesca in America" is an unprecedented opportunity to see six of the eight extant altarpiece panels all in one place plus another important Piero panel from a different altarpiece, "Virgin and Child Enthroned with Four Angels", 1460-70, on loan from the Sterling and Francine Clark Institute in Williamstown, MA.  Presented in the intimate setting of the Oval Gallery, the three large and four smaller format works clearly show the artist's masterful handling of biblical imagery in oil on panel with a lot of shimmering gold.  It is remarkable that so many of these Italian works belong to American collections - only the full length panel of Saint Augustine belongs to a European institution - the Museu Nacional de Arte Antiga in Lisbon.  This is the first solo exhibition of Piero della Francesca's work in the United States and the first time ever that so many of the Sant'Agostino panels have been re-assembled for display.

Moving downstairs to the temporary exhibitions gallery at the Frick we come to a very special loan exhibition from the Sterling and Francine Clark Art Institute in Williamstown, MA, dedicated to 19th century drawings and prints from the Clark's own collection.  "The Impressionist Line from Degas to Toulouse-Lautrec" is a wonderful survey of French works on paper from the Realist, Impressionist and Post-Impressionist eras.

Exquisite examples of charcoal and graphite drawings, pastels, etchings and lithographs from such luminaries as Cézanne, Degas, Gaugin, Renoir, Manet and Toulouse-Lautrec represent the very best draftsmanship the epoch had to offer.  With depictions of rural and urban life, peasants and laborers and demimondaines, the 58 drawings and prints presented here represent the very best graphic achievements of the Impressionists, their predecessors and their immediate followers. 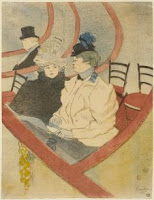 Some of the images are quite well known, like Cézanne's "The Bathers: Large Format", 1898, and Renoir's "Pinning the Hat:  Second Plate", 1898, but others, such as Toulouse-Lautrec's "Box at the Grand Tier", 1897 (see right), and the Gaugin zincographs on yellow paper from the Volpini Suite, 1887, were delightful surprises.

This is my favorite period in the world of prints and I loved seeing these iconic examples of French etchings and lithography.  The added bonus of the beautiful drawings, charcoals and pastels made the whole presentation even more impressive.  This small but lovely exhibition remains on view until June 16th.
Posted by Georgina Kelman at 8:58 PM