"Barcelona and Modernity: Gaudí to Dalí" 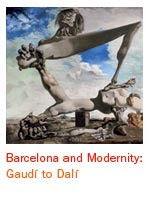 In the years between the Universal Exhibition of 1888 and the end of the Spanish Civil War in 1939, the city of Barcelona, in fact the entire region of Catalunya, was a thriving center of creativity in the arts. Often overlooked in the broader spectrum of Modern European Art, the spirit of "Modernisme" asserted itself in the visual and decorative arts in the outstanding contributions made by some world famous Catalan names, like Pablo Picasso and Salvador Dalí, and by more obscure but also first rate artists whom we come to discover here. From now until June 3, the Metropolitan Museum of Art presents "Barcelona and Modernity: Gaudí to Dalí" an exhibition that will open the visitor's eyes to the creative wealth originating from this coastal region of Eastern Spain.

Beginning with "Renaixença", the Catalan Renaissance, where industry thrived and with it a demand for art and luxury goods. Local artists like Ramon Casas (1866-1932) and Santiago Rusiñol (1861-1931) studied the art being created in centers such as Paris, Brussels and Vienna, and made it uniquely their own. By the end of the 1800's, a young man named Pablo Picasso (1881-1973) came on the scene and his impact, of course, is universal and legendary. The founding of "El Quatre Gats (The Four Cats, or, Just a Few Guys, in Catalan slang)" provided the Barcelona equivalent of the artists' cafés of Montmartre, and the venue for Picasso's first solo show in 1900. 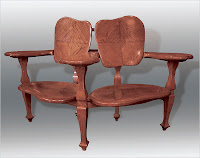 The exhibition goes on to showcase the contributions made by Catalan artists in the fields of design and the decorative arts. Most prominent among these is Antoni Gaudí (1852-1926), whose name is synonymous with Barcelona and its unique architecture. But he was also a fabulous furniture designer and his work is represented with several outstanding pieces. Also on display are wonderful tiles, jewelry, textiles, architectural models, and more furniture by lesser known but also important designers of the time. 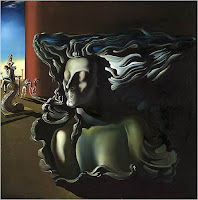 Passing through "Noucentisme" or "Nineteen-hundreds Style" to the Avant Garde and Surrealism we are again presented works by world famous artists who hail from the region. Joan Miró's "The Farm", 1921, and "Woman Strolling on the Rambla in Barcelona", 1925, hangs with his compatriot Salvador Dalí's "The Dream", 1931, and works by Francis Picabia and Joachim Torres-Garcia. What I found really interesting was how much each influenced the other. No one worked in a vacuum and even a total original like Dalí clearly derived inspiration from local celebrities like Gaudí.

The party came to an end with Francisco Franco and the Spanish Civil War. Artists' reactions to the events are reflected in Dalí's "Soft Construction with Boiled Beans", 1936, and several sketches by Picasso for his masterpiece "Guernica". By 1939, the rest of Europe was erupting into World War 2, and the era of prosperity and creativity was definitely over. But what a legacy remains! The visitor to this exhibition will be amazed at the wealth of art and design that is clearly, uniquely and specifically the pride of Barcelona.

Posted by Georgina Kelman at 9:12 AM