What's On At The Morgan Library

With summer definitely over and an autumn chill in the air, it is time to catch up on some museum exhibitions that I have been meaning to get to.  One show on the list is "Alice:  150 Years of Wonderland" now in its final week at The Morgan Library and Museum on Madison Avenue @37th Street. 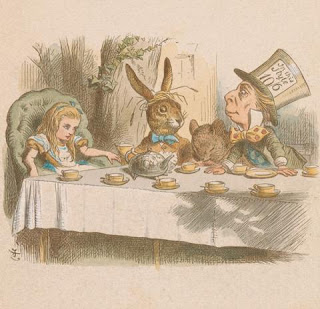 For a century and a half, children and adults have been enthralled with Lewis Carroll's tale of 10-year-old Alice and her adventures down the rabbit hole.  Indeed, since it first appeared in bookstores on July 4, 1865, it has never been out of print and the story's influence on artists, musicians and popular culture remains stronger than ever. 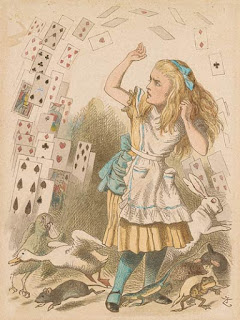 "Alice's Adventures in Wonderland", or "Alice's Adventures Under Ground" as it was originally titled, was conceived on a boating trip one summer afternoon on the River Thames en route to a picnic in Godstow.  On this particular outing, the three Liddell sisters, Lorina, aged 13, Alice, 10, and Edith, 8, were being rowed by family friend Charles Lutwidge Dodgson (later known as Lewis Carroll) and fellow Oxford don the Reverend Robinson Duckworth.  The little girls asked for a story and Carroll began to tell the tale of Alice disappearing "straight down a rabbit-hole" and by the end of the afternoon the picnic party was enthralled with the adventures of the young heroine in Wonderland. 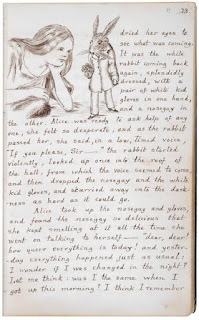 Young Alice herself was so enchanted with the story that she asked for a written copy which Carroll was happy to provide.  The actual writing of the book was completed in a few months but Carroll, understanding that the key to children's literature was the illustrations, did not present a finished manuscript to Alice until two years later.  Realizing the potential of the novel, Carroll revised and expanded the text and commissioned John Tenniel, one of the best illustrators of the time, to develop the pictures.  The first edition of "Alice's Adventures in Wonderland" was published exactly three years after the picnic in Godstow but it was soon withdrawn due to  Tenniel's dissatisfaction with the quality of the reproductions.  The next edition appeared just a few months later, and the rest, as they say, is history.

For this sesquicentennial exhibition, The Morgan Library has drawn on its significant collection of manuscripts and documents to give readers a glimpse into the creation of this enduring classic.  From letters and photographs we gain a sense of Carroll and his (borderline unseemly) relationship with Alice and her family as well as the working relationships with his publisher and illustrator.  Early drawings and later printed illustrations show the development of the characters into what we all know and love to this day.  Recordings of songs from Victorian to Pop music and a filmography from silent pictures to talkies give evidence to the incredible influence that Alice, the Mad Hatter, the White Rabbit and the Blue Caterpillar have had on us all. 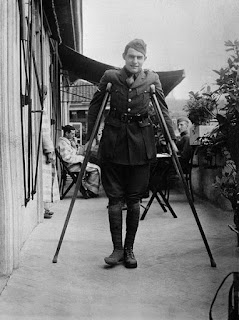 On a totally different note, the exhibition that recently opened across the hall from "Alice" is devoted to the work of one of America's most well known and accomplished literary lions, Ernest Hemingway (1899-1961).  Drawing on the The Morgan's substantial holdings and augmented with loans from the John F. Kennedy Presidential Library and Museum, the life and work of Hemingway during his watershed period is explored through photos, correspondence, manuscripts and printed books.

"Ernest Hemingway:  Between Two Wars" portrays the author coming into his own and at the onset of his literary career.  Beginning with his engagement in World War I where he was quickly and seriously injured (see above photo of Hemingway on crutches while recovering in Milan, 1918) the exhibition continues through his legendary Paris years where he lived with his first wife, Hadley, and was a key member of the ex-pat artistic community.  Hand-written and typed letters from Gertrude Stein, F. Scott Fitzgerald and Dorothy Parker track his progress from ingenue to superstar with all its incumbent anxiety and triumph. 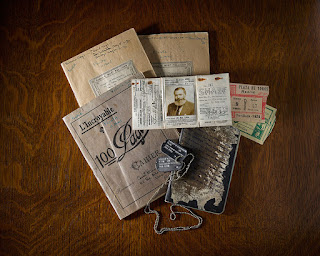 Here we find an invitation from Gertrude Stein to one of her legendary salons, a letter from Fitzgerald, himself an established writer, congratulating Hemingway on "The Sun Also Rises" and the recipient's hand-written response "Kiss my ass", and a note from Sylvia Beach, James Joyce's champion, praising Hemingway on his marvelous prose.  We are also treated to typewritten manuscripts with the author's corrections in pencil and Hemingway's own drafts of covers and potential titles for his works.

Ernest Hemingway was an archetypal macho man.  He liked to drink, he liked women (he had four wives), he liked "manly" sports like big game hunting and bull fighting.  He was known as an intrepid reporter, a super sportsman and above all a brilliant author.  Sadly, he committed suicide in Ketchum, Idaho, at the age of 61 after suffering from depression, alcoholism and paranoia.  This exhibition is an intimate and enlightening look at one of the 20th century's greatest and most enigmatic writers in the prime of his glorious life. 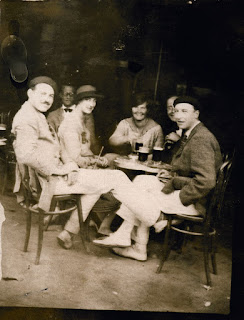 Hemingway (left) at the Festival of San Fermin, Pamplona, 1925
Posted by Georgina Kelman at 8:22 PM