After a good night's sleep and a substantial breakfast I was ready to hit the museum trail again.  Today's goal was to visit the Monasterio de Las Descalza Reales, literally the Convent of the Barefoot Royals, to see their little known but supposedly very strong collection of art and artifacts, and also to visit the Museo Sorolla located in the actual home and studio of one of Spain's most beloved painters, Joaquín Sorolla.

The Monasterio had limited hours of operation and admittance was only as part of a guided tour - in Spanish - so I tackled that first.  It was only a short walk from my hotel, in between the Puerta del Sol and the Palacio Real de Madrid (Royal Palace), but when I got there people were already lined up - as it turned out for nothing as all of the morning tours were already sold out.  There was nothing to be done until the ticket office re-opened after lunch, at 3 PM.  So I checked my map and had a nice walk through some hip and residential neighborhoods to get to the Paseo General Martinez Campos and the Museo Sorolla. 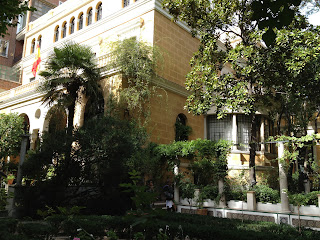 Entering through a walled garden with a beautiful pond and fountains I had an inkling that I was visiting a very special place.  I already knew that Joaquín Sorolla was one of my favorite painters.  I had discovered his work at an exhibition in 2007 at the Petit Palais in Paris entitled "John Singer Sargent and Joaquin Sorolla - Painters of Light", and again more recently at the Queen Sophia Spanish Institute in New York where his series "The Vision of Spain" was on view.  But there is a special magic that happens when you visit the place where the artist actually lived and worked.  Despite the busloads of tourists, this phenomenon can be experienced at Monet's Giverny and Cézanne's studio in Aix-en-Provence, and here, where the crowds are much slimmer and the setting virtually untouched since his day, one can truly appreciate Sorolla's genius.

The house was built in 1911 to Sorolla's specifications as a functioning studio, exhibition space and home for his wife, Clotilde, and their three children.  It became a museum in 1931 with the couple's only son as the first director.  While the work areas have been cleared out somewhat, the entire home retains the original decorations and furniture and the walls are filled with his oils.  It is like stepping back in time. 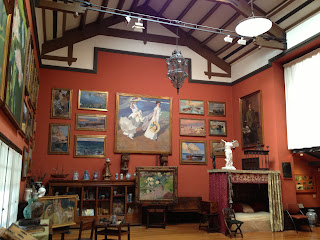 With the artist's easel, desk and collected treasures arranged almost as they had been in his time, and the walls covered "salon style" with his paintings, one gets a real feeling for his curious mind, his love for his family and, of course, his amazing ability to capture light and mood in his works.  It is no wonder that on the rare occasion a Joaquín Sorolla's painting comes on the market it fetches a very high price.

After enjoying a few quiet moments in the shade of the garden it was time to head back over to try my luck with the Monasterio tickets again.  I got in the queue at about 2:45 and by the time the doors opened and I got to the ticket window I was able to procure the last spots in the last tour of the day.  I  celebrated this small victory with a drink and some tapas and a nearby cerveceria but returned in very good time to join my tour.

A little history here - The Monastery of the Barefoot Royals is situated in the rather forbidding, at least from the outside, former palace of King Carlos I and his wife whose daughter, Joanna of Austria, founded the convent in 1559.  In the beginning, the nuns entering this convent were of Royal or at least aristocratic descent who were either widowed, disappointed in love, or wanted to devote their lives to being "brides of Christ".  Upon entering the convent, each of these noblewomen pledged a dowry which more often than not consisted of an artistic masterpiece or a religious treasure.  The convent quickly became one of the richest in Europe. 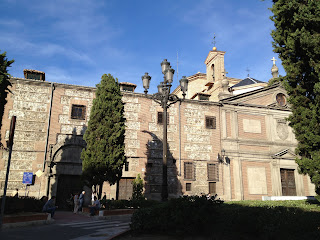 By the 20th Century the women entering the convent were no longer aristocrats but generally quite poor and the costs of maintaining the institution were mounting.  In 1960, through a special Papal dispensation, El Monasterio de las Descalzas Reales was permitted to open as a museum and charge the public an admission fee.  Twenty five years later it was rated as "Museum of the Year" by the European Council.

Aware of this story and in great anticipation of the treasures purported to lie within, I started on my tour.  By the second room I realized that this was going to be extraordinary.  I don't speak much Spanish but it didn't take a linguist to understand the names "Titian", "Breughel" and "Rubens"!  Nor does it require a degree in theology to realize the importance in Catholic and church history of pieces of the "True Cross" or the bones of Saint Sebastian.  Room after room, shrine after shrine, treasure after treasure - all of the highest quality.  And unlike many churches I have visited over the years, everything was perfectly maintained, the altar cloths starched and ironed, the frames and paintings immaculate.

When we were ushered out at 6 o'clock on the dot, with the doors firmly shut behind us, the perfect end to this magical day was to toast Madrid and its marvelous art with a Mahou beer and some delicious snacks at the famous Dolores Tapas Bar.  What would the Barefoot Nuns say?!?!?!
Posted by Georgina Kelman at 7:00 PM