A Visit to Historic Charlottetown, PEI

The waterfront city of Charlottetown has the soul of a small town but the energy of one much larger.  Although its population comprises just 35,000 residents, it offers cultural and educational opportunities far beyond the usual scope of a community of this size.  And as the Capital City of the Province of Prince Edward Island, it is the Seat of a small but fully functioning Legislative Assembly.

The name "Charlotte Town" was adopted in 1764 by the British Surveyor General, Captain Samuel Holland, in honor of Queen Charlotte, the wife of King George III.  With the growth of Charlotte Town as the administrative center of the island province and as a military headquarters, it became a city in 1855.  By then the island's legislature had outgrown its haphazard meeting spots in pubs and private salons and an imposing three story stone government building was constructed in the center of town. 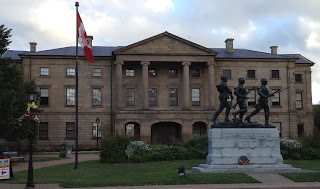 It was here in "Province House" that the leaders of Upper Canada (now Ontario), Lower Canada (now Quebec), New Brunswick, Nova Scotia and Prince Edward Island first met to discuss the possibility of joining the colonies together as one.  The agreement reached in Charlottetown on the 1st of September, 1864, provided the foundation for what ultimately became the Dominion of Canada on July 1st, 1867.  The title "Birthplace of Confederation" is proudly proclaimed to this day!

I first visited Charlottetown with my parents on a summer vacation in the 1960s and have returned regularly over the years.  Each time I go back I am impressed with how perfectly the city has adapted to the expanding population of both tourists and locals.  With a very keen regard for its impressive history, Charlottetown has managed to accommodate 21st Century needs with a very genteel sensibility.  Historic homes and buildings are beautifully preserved and sometimes re-purposed to compliment the changing times.  To walk in downtown Charlottetown is to tread a lovely path between the past and the present. 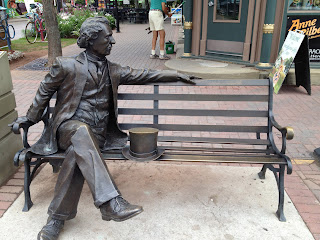 Have a seat and a chat with
Sir John A. MacDonald, the first Prime Minister of Canada!

I have been familiar with the very high quality of the Charlottetown theatre scene since I saw my first production of "Anne of Green Gables", a musical adaptation of Lucy Maud Montgomery's marvelous children's novel, at the Confederation Centre of the Arts in 1969.  The show is still playing to packed houses 48 years since its premiere and I must admit I have seen it (and loved it) several more times!  But there is a lot more to Charlottetown culture than the ubiquitous "Anne".  Both within the Centre and at various surrounding venues there is no shortage of opportunities to enjoy great live theatre or music from Ceilidhs to Johnny Cash.

Another great reason why I keep coming back to Prince Edward Island and Charlottetown is the fabulous food!  Over the past few years an explosion of fine restaurants featuring excellent local products prepared by a new generation of chefs trained at the Culinary Institute of Canada, in the City's Holland College.  A visit to a local eatery, no matter how humble, is a gourmet experience.  Local breweries provide hearty ales to accompany delicious fish 'n chips.  Canadian wines are the perfect choice for a lobster dinner preceded by PEI mussels or oysters on the half-shell.  And the perfect dessert - an ice cream at Cows!

Of course, part of the charm of Prince Edward Island is a chance to recapture nice memories of my youth, but nostalgia only goes so far.  It is the Island's unfailing ability to cocoon its visitors with the best of both past and present that makes an annual trip to PEI something to look forward to all year long!
Posted by Georgina Kelman at 5:13 PM