Kelman family lore has always held a special place for the tale of Great Aunt Jessie, a missionary doctor in Mainland China during the first half of the 20th century.  Passing through Shanghai a few weeks ago set me to thinking - I wonder if Aunt Jessie walked on these very sidewalks?  With a little investigation I discovered a fascinating tale of feminism, humanitarianism, heroism and old time religion that I'd like to share with you here.

The family history was sketchy - Jessie McDonald, one of the sisters of my husband's grandfather (himself an adventurer), was born in Canada in 1888 and somehow made her way to China as a physician and a missionary.  There was a story about her operating on and saving the life of a woman who had tried to commit suicide by swallowing a box of pins.  There was another story about her being evacuated from China by Chiang Kai-shek's personal pilot in one of the last planes out.  After doing a little research I discovered that these amazing anecdotes are only a small part of a bigger, even more compelling picture.

Great Aunt Jessie's exposure to the Chinese culture began as a young girl growing up in Vancouver, Canada, where her mother tutored immigrants in English through a local church program.  A precocious child, she soon had her own pupil, a grown-up Chinese man who lacked not only English language skills but also the Christian faith.  To a good Protestant Sunday School student, this was unconscionable and a major motivation in her choice of a career.

But how to get to China to spread the word?  A visiting missionary spoke of the desperate lack of physicians there and that was all Jessie needed to formulate her plan and put it into action.  In 1905, she became one of the very first women in Canada to be accepted as a medical student and she was one of five females in a class of 350 at the University of Toronto.  Further studies in London and Vienna and internships in Boston and Philadelphia completed her medical doctorate degree with specialties in tropical diseases and surgery.  After completing religious training at the Glasgow [Scotland] Bible Training Institute she was finally accepted as a missionary with the China Inland Mission and sailed to China from London in 1913. 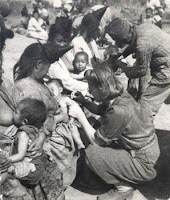 Dr. Jessie McDonald arrived in China at the age of 26 to discover that medical care in general and care for female patients in particular was abysmal at best.  A donation from a generous American benefactor allowed the construction of a women's health facility at the mission hospital in Kaifeng, Honan Province, in 1914.  She wasted no time in learning Chinese and in training several young local women to work as nurses.  Her patient load grew from 299 in 1915 to 698 two years later with many cases of diphtheria, scarlet fever, massive untreated tumors, suicide attempts and opium abuse as well as women's health issues.

"Jessie Mac", as she was affectionately known, stayed at the Women's Hospital in Kaifeng for 26 years through revolutions, civil war and natural disasters.  During this time she made several visits to the United States to brush up on other skills such as trauma surgery and dealing with "drunks".  She and her staff were evacuated in 1927 because of a military occupation but returned three years later to find the hospital virtually destroyed.  Undaunted, they rebuilt and continued to treat sick and injured patients.

It was a different story in 1939 when the Japanese Invasion forced a reshuffling of the hospital's administration and Dr. Jessie to relocate farther inland to open a new clinic in Paoshan.  Sleeping in a room with an earthen floor and cracks in the wall, she wrote home that "this was truly a job for a younger person" but she believed it was her duty to stay.

And stay she did until the final denouement.  When the Communist Party gained power the first thing to go was the China Inland Mission.  Dr. Jessie McDonald continued at her post until 1952 when the hospital was forced to close and the military ordered her out.  According to published reports, she made one final stop in the town's church, prayed, and rang the bells one last time before her ultimate departure from China.

Dr. McDonald ended up in Southern California on the faculty of Biola School of Missionary Medicine.  My husband remembers meeting her twice, once as a little boy at his grandparents' house shortly after her return to the United States, and once again as a UCLA graduate student in the 1970s when she was more advanced in years.  On that visit he recalls her sitting on the lanai facing west toward her beloved China and speaking of her time there in reverent tones.

"Jessie Mac" passed away in 1980.  Her papers were deposited by her daughter, Margaret McDonald, at the Billy Graham Center Archives in Wheaton IL, where they can be studied by anyone with an interest in the history of medicine, the China Inland Mission or political and social upheavals in China in the first half of the 20th Century.  In 2007, Anne McDonald (a grand-daughter?) presented a lecture at the University of Calgary entitled "A Missionary in China: Dr. Jessie McDonald" that explores her contribution to both the propagation of Christianity and the health and welfare of women in China.

Today the missionary clinic she opened and operated continues as the Peggy Health Center dedicated to AIDS prevention, education and treatment and thereby Dr. Jessie McDonald's legacy of ministering to the Chinese people in both body and soul continues.  Truly "Great" Aunt Jessie in every sense of the word!

Posted by Georgina Kelman at 11:07 AM

Fantastic write-up! Thanks for the info!